Are VPNs legal in China? A common sense guide

We get asked all the time if VPNs are legal in China. The answer is more complicated than a simple yes or no, we'll explain the legality of using a VPN and the best VPNs for China.
Paul Bischoff TECH WRITER, PRIVACY ADVOCATE AND VPN EXPERT 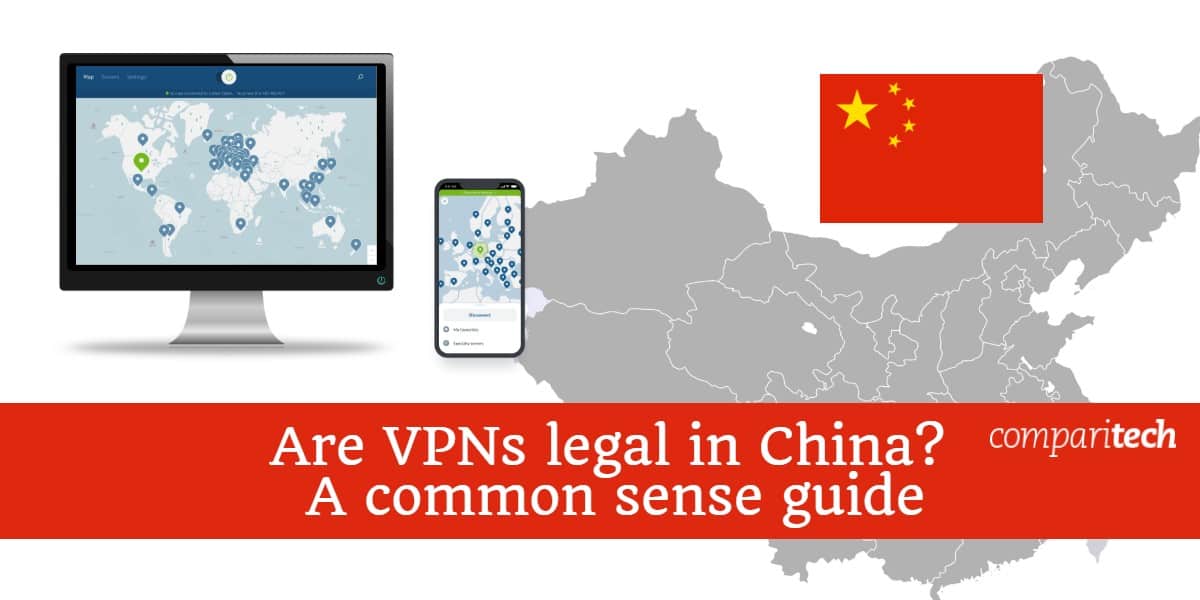 China rarely enforces laws that bar individual citizens from using VPNs, and there are very few precedents of anyone being charged with a crime for using one.

That being said, Chinese authorities do make it difficult to get your hands on a working VPN. VPN provider websites are blocked. VPN apps have been removed from Apple and Android app stores. And many VPNs just don’t work in the country due to server blacklists and VPN detection technology used in the Great Firewall.

We’ll get into the details on VPN legality in China, but if you’re just looking for one that can bypass the Great Firewall and unblock websites and apps, here’s a quick breakdown of the best VPNs for China.

Note that this article is not professional legal advice.

Here’s a more detailed breakdown of the best VPNs for China:

ExpressVPN is our top recommendation for users in mainland China. The company has long served both ex-pats and native Chinese customers, and has a stellar record. It unblocks all apps and websites from within China and does so faster than any other VPN we’ve tested. The security is unbeatable, offering robust encryption and leak protection. ExpressVPN doesn’t store any identifying logs. Customer support is available via live chat 24 hours per day.

Apps are available for Windows, MacOS, iOS, Android, Linux, Amazon Fire TV, and some wifi routers. You can connect up to five devices at once. ExpressVPN operates servers in more than 90 countries.

Hotspot Shield now works in China. The easy-to-use apps are available for Windows, MacOS, iOS, and Android, along with a browser extension for Chrome. You can connect as many devices as you want on a single plan, making it a good option for a family or group of housemates. Speeds are decent enough to stream video in HD.

Live chat support is available 24/7. Hotspot Shield has dealt with some privacy concerns in the past, but it has since updated its policies so that it no longer keeps any identifying logs. You get more than 70 countries to choose from.

BEST BUDGET OPTION:Going to be in China for over a month? Hotspot Shield is offering new users a generous 45-day money-back guarantee.

NordVPN is a low cost provider that works in China. Despite its low price, NordVPN doesn’t skimp on privacy or security. It keeps zero logs and employs strong encryption and leak protection. NordVPN is excellent for unblocking region-locked content, including video streaming sites like Hulu and Amazon Prime Video.

Apps are available for Windows, MacOS, iOS, Android, Linux, and Amazon Fire TV. You can connect up to six devices on one plan. Live-chat support is ready around the clock to assist you.

STRONG ALL-ROUNDER:NordVPN is a well-rounded VPN that works in China and comes in at a low price. Includes a 30-day money-back guarantee.

Surfshark now works in China and excels at unblocking streaming video providers from abroad. If you’re looking for a VPN that works in China and can securely access the likes of Netflix and Hulu, then this is a solid option. Best of all, you get an unlimited number of simultaneous connections, making it a great option for a group of housemates or a family.

Speeds are decent and security is tight. Surfshark doesn’t store any logs that could identify users. Torrenting is allowed and the app includes a kill switch. Software versions are available for Windows, MacOS, iOS, and Android.

UNLIMITED CONNECTIONS:Surfshark lets you connect as many devices as you want on a single plan. It comes with a 30-day money-back guarantee.

PrivateVPN’s apps include a “stealth mode” feature that allows users to bypass the Great Firewall and access blocked sites. PrivateVPN also works with streaming sites like Netflix, Hulu, and BBC iPlayer from abroad. This simple-to-use VPN lets you connect up to six devices at once. Apps are available for Windows, MacOS, Android, and iOS.

PrivateVPN employs military-grade encryption to prevent data leaks. It stores no logs about user activity or identity. You can contact the live-chat support team if any issues crop up. Although its server network is smaller than others on this list, we found it offers comparable speeds.

RELIABLE CHINA VPN:PrivateVPN is gaining traction as a trusted VPN in China. It comes with a 30-day money-back guarantee.

VyprVPN has long served people in China looking to bypass the country’s censorship. It owns and operates all of its own servers rather than renting them from third parties. That guarantees a higher level of privacy and security as well as reliable speeds. It can securely access Netflix as well as a few other streaming sites. Live chat support can be contacted on the website.

The Pro tier lets users avail of the Chameleon protocol, which disguises VPN traffic as normal, unencrypted data as it passes through the Great Firewall undetected. VyprVPN also accepts Alipay, which is useful for people in China with no other payment options.

VETERAN CHINA VPN:VyprVPN has a wealth of experience when it comes to serving users in China. It offers a 30-day money-back guarantee.

We have an even more extensive guide to which VPNs work in China and which don’t based on testing 59 different services.

China does what it can to cut off access to VPNs and prevent them from working, but it very rarely goes so far as to punish people for using VPNs, save for one case in 2019 in which a man was fined 1,000 Yuan (about US$157).

That man was charged for violating Articles 6 and 14 of the Provisional Regulations of China’s Administration of International Networking of Computer Information. The 1997 regulation states that individuals and organizations can only connect to international networks through channels provided by the government.

But the overwhelming majority of VPN users never face criminal charges or fines. VPNs are quite common in China.

In 2017, reports surfaced of a forthcoming ban on all VPNs in China. That story, first reported by Bloomberg, stated that the country’s three state-run internet service providers would block access to all VPNs used to bypass the Great Firewall in February 2018.

That misleading report led to a lot of panic among VPN users in China, but it was debunked by China’s own Ministry of Industry and Information Technology as false. February 2018 rolled around and VPN users continued with business as usual.

This wasn’t the only time western media missed the mark on VPN regulation in China. In January 2017, multiple news outlets misinterpreted a government notice announcing a campaign to crack down on VPNs. That notice did not say using a VPN is a crime, though many sensationalist reports portrayed it that way.

In reality, Chinese authorities only dropped the hammer on domestic VPN providers–Chinese operators offering Great Firewall-busting VPNs to Chinese users. Most VPNs, including all of the ones we recommend, do not have any official presence in China and are not under Chinese jurisdiction; they just have users there. Therefore, this law does not apply to most VPN providers and they continue to serve users in China as they always have.

Although using a VPN won’t get you thrown in jail in China, authorities do what they can to limit access to them. One way they do this is by removing VPN apps from app stores.

As with all Google services, Google Play is blocked in China. Android users in China must resort to domestic app stores, which have been wiped clean of VPNs on orders from the government.

The Apple App Store is still accessible in China, but the VPN apps have been removed. Apple conceded to pressure from the Chinese government and removed VPN apps from the Chinese version of the App store in 2017. It’s possible to change the location of an Apple account to bypass this, but it requires a local form of payment in the other country.

If you’re traveling to China and want to access the free web on your phone, be sure to download your VPN app ahead of time.

The Great Firewall only extends as far as mainland China. Hong Kong, Taiwan, and Macau maintain free and open access to the global internet. You’ll still be able to access all your favorite social media, news, chat apps, and streaming sites from those places without a VPN.

That being said, we still recommend using a VPN. Not only do these services help to protect your privacy, they’ll allow you to regain access to region-locked platforms like Disney Plus and Netflix as you travel.