Best VPNs for IMO so can bypass censorship blocks

IMO is popular but unavailable in some countries. We explain how a VPN can help you use IMO in places like Dubai and the UAE, and suggest the best VPNs for the job.
Osman Husain Tech journalist, VPN and streaming expert 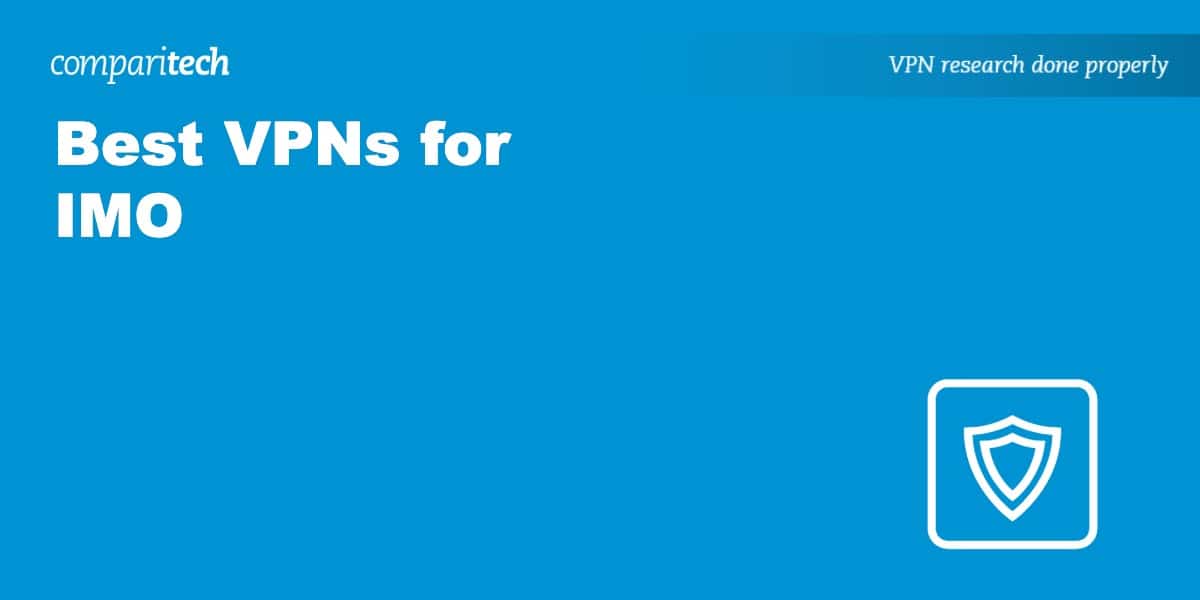 IMO has around 200 million monthly users, but as the service grows, many governments and institutions have grown weary. IMO – especially its VoIP features – are blocked in countries in the Middle East as well as more selectively by businesses and educational institutions across the world. The best way to overcome such barriers is to use a VPN for IMO.

Short for Virtual Private Network, a VPN encrypts all the web traffic flowing to and from your device and routes it via a server outside your current location, thereby masking your identity. It makes it difficult for ISPs, hackers, or government agencies to track online behavior.

We cover each of the VPNs in this article in some detail, but if you only have time for a quick summary, here’s a quick summary of our favorite VPNs for IMO:

NordVPN is offering a fully-featured risk-free 30-day trial if you sign up at this page. You can use the VPN rated #1 for IMO with no restrictions for a month. As such, it’s perfect for anyone looking to stay in touch on a short vacation abroad.

What’s the best VPN for IMO?

In this section, we’ll discuss a few VPN services that seamlessly work with IMO. They’re judged on the following factors:

Here’s a list of the best VPNs for IMO:

NordVPN is our first choice for an IMO VPN. It’s been around for over a decade and the experience shows when judged on the core product — blazing fast speeds and solid encryption.

It’s also another company that declines to store any user data. People looking to unblock IMO may have to overcome government restrictions so it’s absolutely vital that their privacy is protected. NordVPN has you covered.

A sprawling server network of over 5,000 spread across 60 countries means you’re getting what you pay for. And you can use this service in a variety of other scenarios too, since it’s great for streaming, torrenting, and bypasing censorship.

BEST VPN FOR IMO:NordVPN is our top selection. Extremely fast, solid security and privacy, and works reliably in Dubai and the UAE. Use up to 6 devices at once with great. Risk-free with a 30-day money back guarantee.

Here’s our in-depth review of NordVPN.

Surfshark is a wallet-friendly VPN that makes it easy to use region-locked services abroad and can reliably bypass even the strictest online blocking with its one-click NoBorders mode. With steady speeds, unlimited bandwidth, and no connection limit, it’s ideal for anonymous chatting, streaming, or torrenting.

There’s a wide range of security features built-in. These include 256-bit encryption, protection against DNS and IPv6 leaks, and a kill switch that lets you decide which apps stop sending data should your connection drop. Surfshark doesn’t log any personally identifiable data.

This VPN provides access to 3,200+ servers spread across 65 countries. As such, you shouldn’t have any issues finding a high-speed, low-latency connection, regardless of which country you’re in.

Apps are available for Android, iOS, MacOS, Windows, and Linux.

BEST BUDGET VPN:Surfshark is a speedy, reliable VPN that unblocks a huge range of services (including IMO) abroad. Just as important, it boasts a no-logs policy, powerful security features, and a 30-day money-back guarantee.

ExpressVPN delivers solid speeds and tight security. The app connects within seconds and there’s rarely, if ever, any downtime. Apps are beginner-friendly but have enough features to appease advanced users.

ExpressVPN operates over 3,000 servers spread across 94 countries. Encryption standards are top-tier — all servers use 256-bit AES encryption, 4,096-bit RSA keys with perfect forward secrecy, and SHA512 authentication. This VPN even has its own protocol, Lightway, that boasts higher speeds than OpenVPN.

Privacy concerns are eased by the fact that the company doesn’t retain any traffic logs. The only sliver of metadata retention relates to the date (not time) when connected to the service, choice of location, and total bandwidth used. The individual IP address is not logged. An internet kill switch is included – this feature temporarily halts all web traffic if the connection drops or becomes unstable – thereby adding an additional layer of security.

It has apps for Windows, MacOS, Linux, Android, and iOS.

CHAT PRIVATELY ANYWHERE:ExpressVPN works reliably in Dubai and the UAE. It unblocks all major sites and apps including IMO and Skype. Offers fast connections and servers in a huge range of countries. Try it with the 30-day money back guarantee.

CyberGhost does its job efficiently and reliably. It may not have a wealth of options that appeal to power users, but speeds are fast, encryption standards are robust, and it doesn’t cost an arm and a leg, either.

The company is incorporated in Romania which means there aren’t any data retention laws to comply with. It also has an internal policy of zero data storage – ideal for users who may be worried about that.

It’s been constantly adding new servers, too. Currently, over 7,000 are spread across 90+ countries, and these are seperated by intended task. For instance, there’s a whole set of servers devoted to accessing streaming services abroad.

CyberGhost uses 256-bit AES encryption on the WireGuard protocol by default along with 2,048-bit RSA keys and MD5 HMAC authentication. Apps are available for Windows, Linux, MacOS, Android, and iOS.

BEGINNERS CHOICE:CyberGhost is easy to use. Top rated for privacy, zero logs, and DNS leak protection. Unblocks IMO but can struggle with some other popular streaming sites. 45-day money back guarantee.

Here’s our full review of CyberGhost for further reading.

IPVanish will appeal to privacy advocates because it’s a completely logless service. This means there’s hardly any data retention – no metadata about browsing sessions, choice of servers, or bandwidth used. The service will record a few details when an account is registered for the first time but it’s possible to circumvent this via anonymous signups.

Speeds are great too – our tests of IPVanish indicated that the service was able to stream 1080p video without any lag. Like ExpressVPN, IPVanish also has an option to connect to a “Best Server” – one chosen by the software based on your current location.

Encryption standards are stringent – IPVanish leverages 256-bit encryption on the WireGuard protocol by default, SHA512 authentication, and a DHE-RSA 2,048 key exchange with perfect forward secrecy. The latter feature makes it impossible for hackers to decrypt past session data in the unlikely scenario of a break in. An internet kill switch is also included.

With over 1,900 servers spread across 75 worldwide locations, it’ll be easy to find a stable server to unblock IMO.

Many users find it an excellent option for Kodi because it allows them to download the Android APK directly to their device. The interface is also remote control friendly for Kodi devices that lack a keyboard and mouse. There are apps for both MacOS, Windows, iOS, and Android.

NO CONNECTION LIMIT:IPVanish is great for families. Unblocks IMO, handles several simultaneous connections well. Recommend for their high standard of privacy, but keep shopping if you want to stream regularly.

ZenMate rounds up our list. The service isn’t the quickest or the most efficient but it will get the job done. A generous 30-day money back guarantee means you can cancel if unsatisfied within this period.

There’s a sizable community of almost 40 million who currently use the service, although most are probably in it for the popular free Chrome VPN extension. Paid options will grant you the full network of servers – over 4,200 globally.

The service uses 256-bit AES encryption in conjunction with 2,048-bit RSA keys and SHA 256 for authentication. An internet kill switch is included. These are secure standards, so no complaints on this front. The only issue is that there’s no live chat option either for troubleshooting – you’ll have to resort to emailed requests.

Apps are available for MacOS, Windows, Android, and iOS.

Easy to Setup:ZenMate is great for beginners. Reliable with IMO connections. Generally recommended for streaming. Can be prone to slow download speeds and they don’t have live support. 30-day money back guarantee.

Read our full review of ZenMate.

Follow these steps to unblock IMO if the government, workplace, or institutional restrictions are in play:

It can be tricky choosing a VPN at the best of times, but this problem is only compounded when trying to find one that works with messaging apps. After all, VoIP services are blocked entirely in several countries. To ensure you have the best possible experience, our top VPNs for IMO had to deliver impressive results in each of the following areas:

This is just one small part of our testing process. Read our full explainer post to find out more about how we test VPNs at Comparitech.

Using a VPN with IMO: Your questions answered

Should I use a free VPN to unblock IMO?

Free VPNs are a dime a dozen but only offer a microcosm of the same features that paid services will.

Companies operating free VPN services don’t invest in the same robust server network, military-grade encryption protocols, and minimal logging policies that paid services do. That’s because they’re trying to get a barely functional product on the internet and spend a larger proportion of their resources in advertising it. And don’t forget that there’s definitely a monetization strategy in place - this is usually done by besieging you with advertisements or covertly mining your web traffic data to sell to third-party advertisers.

There will be data caps, bandwidth throttling, and a selection of just one or two server locations. You’ll probably be able to send and receive text messages but it’s unlikely that audio/video calls or file transfers will happen without noticeable lag.

Can I use IMO in the UAE or Middle East without a VPN?

Many governments in the Middle East including Qatar and the UAE block the use of VoIP services. This means if you try making free audio or video calls through IMO you probably won’t be able to connect. The instant chat option should work but not much more. We haven’t noticed any changes in this policy the last few days so it’s reasonable to assume that it still stands.

Hence it’s not possible to use IMO without a VPN in the Middle East. We recommend you sign up for a paid service that’ll unlock the full experience.

Where is IMO blocked?

Here is a list of countries that have been known to restrict access to VoIP services - including IMO audio and voice chat. However, regulations are subject to change so this list shouldn’t be treated as a definitive resource.

Is it illegal to use a VPN for IMO?

No, it's not illegal to use a VPN with IMO. Using a VPN in most countries is not considered illegal, but the activities you perform online with a VPN, such as torrenting copyrighted material, would be considered unlawful.