Is using a VPN legal? Safety and legal guide to VPNs

Not sure whether you should be using a VPN? We reveal whether or not VPNs are legal and how safe they are when used on your devices.
Sam Cook Data journalist, privacy advocate and cord-cutting expert 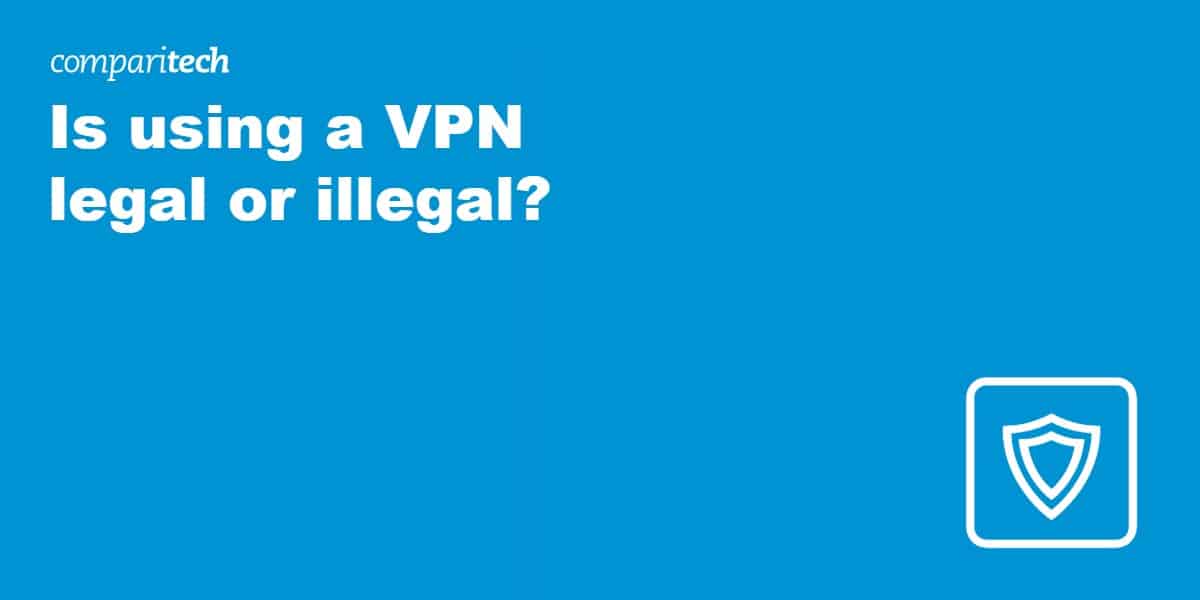 Virtual private networks, or VPNs, are pretty hot ticket services right now. Given the increasing concerns over online user privacy, far more people are looking into these types of services. When it comes to VPNs, two questions we’re often asked at Comparitech are, “Is a VPN legal or illegal?” and “Is a VPN safe to use?“ The simple answer to both of those questions is YES, although there are notable caveats.

First, let’s explore your biggest questions about VPNs. Then, we’ll get into areas of concern that you might want to consider before signing up to any VPN service.

In short: Are VPNs illegal or legal? Are they safe to use?

With but a few exceptions (such as Iran), VPN use is legal everywhere in the world. Furthermore, there are no restrictions in place on how you can use your VPN service. Most VPN services will provide various methods to secure your identity while you’re connected as a way to guarantee you’ll stay safe and anonymous.

While the use of a VPN is perfectly legal, any illegal activity carried out online will remain illegal regardless of whether you use a VPN or not. For example, while a VPN may cover your tracks and keep your activity hidden from your internet provider, torrenting copyrighted material while using a VPN doesn’t make it legal.

Many online services block VPN connections or prohibit their use. That doesn’t make it a crime to use a VPN with those services. More likely, you’ll be breaking the terms of use that you agreed to upon first signing up for the service.

Netflix, for example, prohibits the use of location-changing proxies in its terms and conditions. Netflix also blocks most VPN connections. But using a VPN with Netflix won’t land you in jail. Netflix has largely looked the other way from users who insist on using VPNs.

A region-locked service like Netflix could file a civil—not criminal—lawsuit against you for breaching copyright restrictions. But we haven’t seen any precedent of this happening. At worst, we’ve seen accounts suspended or terminated, but even penalties that harsh are quite rare.

How safe are VPNs?

Reputable virtual private networks are extremely safe to use. A good service will protect your anonymity and will include high-level security features that prevent various kinds of hacking attacks. This usually includes military-grade encryption standards that make it functionally impossible for intruders to hack into the private tunnel and track your activity or steal your data. We’ve got a roundup here of some of the best VPN services.

Your internet-connected devices use your ISP’s internet connection to access the VPN’s remote servers. That private tunnel is deeply secure and protected from outside snooping and intrusion by pretty much everyone, including governments. Meanwhile, your browsing and downloading activity passing through that tunnel are impossible to detect beyond how much data is getting uploaded and downloaded. Your ISP may have data limits that apply, but any specific data they may want to track will not register.

While you are in safe hands with a reputable paid VPN provider, free VPNs need to make money somewhere and won’t usually offer the same levels of security as paid services. Worse still, there are fake VPNs in circulation that are an outright scam. Free VPNs often make their money from advertising or even selling your data so be sure to use a free VPN you can trust. You could also opt for using a cheap VPN service but if you only need a VPN for a short period, you can choose a high-quality VPN with a one-month free trial.

Can the VPN server’s ISP track my activity?

Here’s where some users may get concerned. Although connecting to a VPN server hides your activity from your ISP, the ISP delivering internet to your VPN service can still see your internet activity when you’re connected there.

VPNs have three primary safeguards in place for customers to help mitigate this situation.

What about law enforcement requests?

The methods listed above will also protect individual VPN users from law enforcement requests. If a law enforcement agency or government requests personally-identifying user information from logs or accounts, a VPN service can’t comply if that data doesn’t exist.

And if the law enforcement agency decides to try to issue an order to that VPN service to start tracking logs, most reputable services would sooner shut down their servers or the service altogether than comply. Nevertheless, it is still possible that a VPN service may comply with law enforcement requests, and in situations where the VPN service does not maintain a strict no-logs policy, user data is fairly easy to obtain with a simple warrant.

If I can hide my activity with a VPN, is it legal to use one?

Yes! VPNs are legal to use almost everywhere, even in many countries where many VPNs are blocked, such as China. There are good reasons for this as well.

First of all, not all VPN use is for illegal activities. In fact, a good amount of VPN traffic is business-related. Businesses and business customers often need to connect to VPNs as a security measure.

For those who want to use a VPN for privacy-related reasons, VPNs are a good option. While it is true that VPNs can be used to hide illegal browsing and downloading activities, that type of use is fully dependent on the user and not the VPN company. A government that seeks to make VPN use illegal would have to consider how this move might impact businesses that use VPNs for legitimate purposes, and how similar actions would apply to other types of businesses.

In much the same way, anyone can use a normal internet connection for illegal purposes as well. You are unlikely to see something like internet access get banned due to some users choosing to misuse the internet.

There are some countries where a good amount of VPN use is banned, however. The more obvious suspects come into view here, of course.  In Iran, for example, VPN use is considered illegal. The country very purposefully blocks VPN use as part of its wider internet censorship methods. Meanwhile, in the UAE, VPN use is possibly illegal, although the law is a bit unclear. While no one has been prosecuted in the UAE for VPN use, one UAE law enforcement official states that VPN use is illegal if used to make VoIP calls. The UAE’s restrictions on VoIP are unique to that country, and created to insulate the country’s telecoms from cheaper competition.

Related: Best VPNs for UAE and Dubai & the legal position on VPN use

In China, VPN issues are a bit more complex. In early 2017, the country made it illegal for VPN services to operate without a license. Users, however, are not at risk of legal consequences for using a VPN, although China does do a fair amount of VPN blocking within its borders to minimize how many individuals are accessing the free web. Most media outlets misreported China’s recent VPN law updates.

A VPN service will hide copyright infringement activities, but it won’t protect users who are caught even after using a VPN service. Many services will, however, maintain no-log policies and IP leak protection to help prevent situations where user identity might be compromised. You can see some of the most popular VPNs for torrenting here and read more about the related legal issues.

What is a VPN? How does it work?

For the average user, what’s actually happening when you connect to a virtual private network can be confusing at best, and downright suspicious at worst. You may be using the VPN service to keep prying eyes away from your web activity, but what’s going on under the hood? How do you know the service itself is trustworthy?

VPNs have been around for decades. Long the mainstay for banks and large corporations to help connect employees spread out across the country, virtual private networks are essentially private tunnels between your computer and a server located somewhere else.

Connecting to the internet without a VPN

When you connect to the internet, you are gaining access directly through an Internet Service Provider’s (ISP’s) Network Access Point. This is the technology that all ISPs own and maintain that grants you access to the World Wide Web. When you do so, the ISP assigns an IP address to any device you use to connect to the modem it provides to you. In most cases, the IP address you are given by your ISP belongs to that modem alone.

Generally, your ISP can see all of your internet activity when you’re connected to its network. Although most ISPs have certain safeguards in place to ensure that its network security professionals do not snoop on your activity and steal any private information, it’s certainly possible for them to do so.  Security measures, such as SSL encryption and authentication, do exist on most secured websites to ensure that even your ISP can’t see everything you do. These secure websites are denoted by an “https” at the beginning of your web browser’s URL bar, often along with a green padlock icon.

In this manner, you need not worry about some wayward ISP employee stealing your passwords, for example. Overall, what you do, and what websites you visit, are easily tracked by your ISP. Some activity may trip certain protocols your ISP has in place and trigger alerts. This can include accessing sites that are illegal in your country or engaging in heavy download and upload activities.

Connecting to the internet with a VPN

When you connect to a virtual private network, you’re routing your computer’s connection through a server located somewhere else first. You then access the internet from that server. When you do this, the remote server you’ve connected to assigns you a new IP address. Throughout this effort, you are still connected to your home ISP, and the data transmissions are heavily encrypted (usually either SSL or AES encryption). However, when you’re connected to the VPN server, the aforementioned layers of protection mean that your ISP cannot see what you’re doing, beyond identifying how much data is being uploaded and downloaded.

It’s also important to understand that the remote server you’re connected to may be accessing the internet through a different ISP than your own. For example, if you’re a Washington D.C. resident using Comcast, and you connect to a VPN server located in New York, you might start noticing advertisements for Giants tickets on websites you visit, instead of ads for Redskins games.

Is this a problem? Not at all! The VPN service you’re using is paying the ISP for internet connectivity to that server. Any and all traffic passing through there, including your own, is just part of the deal.