Looking for a VPN for Taiwan? There are plenty of reasons you might want to use a VPN whilst traveling in Taiwan, such as streaming content from back home or keeping data secure.
Paul Bischoff TECH WRITER, PRIVACY ADVOCATE AND VPN EXPERT 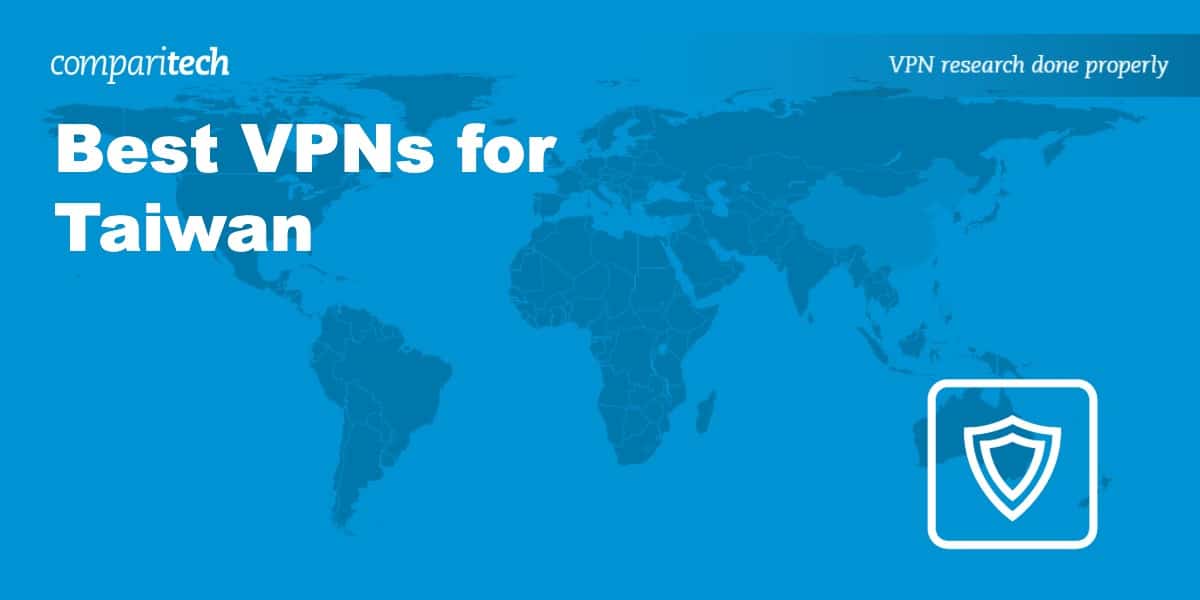 If you’re traveling to Taiwan, a VPN can help protect your privacy. A Taiwan VPN encrypts your internet connection, protecting you from snoopers and hackers on wifi networks at airports, hotels, cafes, and train stations.

Finally, a VPN can allow you to access region-locked content from other countries. That includes music and video streaming services like Netflix, Hulu, BBC iPlayer, Amazon Prime, and Spotify. Just connect to the country where you want to unblock a stream and start watching. Conversely, if you’re outside of Taiwan and want to watch something only accessible from the island, you can connect to a VPN server in Taiwan to unblock streaming services like iQiyi, KKTV, V Live, and more.

These are the best VPNs for Taiwan:

Here’s our list of the best VPNs for Taiwan:

NordVPN is a fantastically fast service that doesn’t skimp on privacy. This no-logs provider uses strong encryption and advanced leak protection to ensure your data remains private. It operates a huge network of servers in over 60 countries. NordVPN unblocks a ton of streaming sites including Netflix, BBC iPlayer, Hulu, and Amazon Prime Video. Connecting to NordVPN’s Taiwan servers unblocks KKTV and iQiyi.

Live chat support is available 24 hours per day, every day of the week.

You can connect up to six devices at once with NordVPN. Apps can be downloaded for Windows, MacOS, iOS, Android, Linux, and Amazon Firestick. Extensions are available for Chrome and Firefox.

BEST VPN FOR TAIWAN:NordVPN is our top choice. Unblocks a wide range of content and puts your security above all else. It even offers a 30-day risk-free money-back guarantee.

Surfshark is an extremely versatile service with plenty of powerful security and privacy features built-in. These include a NoBorders mode that’s specifically designed for bypassing country-wide censorship. Support is available 24/7 over live chat and email.

This VPN’s speeds that are fast enough for uninterrupted browsing and streaming. In fact, with over 3,200 servers in 65 countries, there are very few limits on what you can access. For instance, Surfshark reliably unblocks Netflix US, Hulu, and Amazon Prime Video from abroad.

Surfshark users can connect as many devices as they like simultaneously. Apps are available for iOS, Android, Linux, MacOS, and Windows.

SAFE BROWSING ANYWHERE:Surfshark is a budget-friendly option that provides high speeds, strong security, and a true no-logging policy. What’s more, it lets you connect every device you own. All plans come with a 30-day money-back guarantee.

ExpressVPN is well-suited for use in Taiwan. This veteran provider excels on all fronts. You get top-notch security, consistently high speeds, and access to 24/7 live chat support. Further, the company keeps no logs that could identify a user or their online activity.

The company operates servers in 94 countries. Users can connect up to five devices at once. Apps are available for Windows, MacOS, iOS, Android, Amazon Fire TV, Linux, and certain wifi routers. Browser extensions can be installed on Safari, Chrome, and Firefox.

GREAT AT UNBLOCKING:ExpressVPN is a solid choice for safe browsing, torrenting, or streaming in Taiwan. Comes with a 30-day money-back guarantee.

CyberGhost makes it easy to unblock your favorite streaming channels from North America and Europe while abroad. You can choose what streaming site you’d like to unblock right from the app, rather than guessing which server or location to use. CyberGhost offers fast speeds that are suitable for HD streaming. It unblocks Netflix, Amazon Prime Video, Hulu, and much more. In Taiwan, we successfully unblocked iQiyi and KKTV.

There are also special options for bypassing censorship, torrenting, and securing public wifi connections. The company keeps no logs and uses industry-best encryption to keep your data secure and private.

CyberGhost allows up to 7 simultaneous connections. Apps are available for Windows, MacOS, Linux, iOS, and Android.

PERFECT FOR NOVICES:CyberGhost is a great choice for those on a budget. Unblocks streams both in and out of Taiwan. It comes with a generous 45-day money-back guarantee.

Atlas VPN lets you browse as normal while in Taiwan or when traveling abroad. That’s because it’s highly consistent at bypassing geographic restrictions. We’ve found that it works particularly well with streaming services such as Netflix and Amazon Prime Video. With average speeds of 247 Mbps in our tests, Atlas VPN is certainly one of the fastest VPNs we’ve used and it even has unlimited bandwidth.

With just one Atlas VPN account, you can connect all of your devices at once (some VPNs only allow up to a handful of connections). Another advantage of using Atlas VPN is that it comes with an impressive array of security features that keep you safe online. This includes 256-bit AES encryption, DNS leak protection, a kill switch, ad blocker, and MultiHop servers. Notably, it doesn’t keep identifying logs of its users.

Atlas VPN’s apps can be downloaded for desktop (Windows and Mac) and mobile (Android and iOS). There are also apps for Amazon Fire TV and Android TV although you’ll need to look elsewhere if you require support for Linux or routers.

POWERFUL UNBLOCKING:Atlas VPN works well in Taiwan and when you travel overseas. Stream Netflix from any location. Connect all of your devices at the same time. Includes an ad blocker and MultiHop servers. 30-day money-back guarantee.

PrivateVPN is a smaller provider that offers competitive speeds and security on par with larger rivals. Although it only has around 150 servers, they are spread across 60 countries. PrivateVPN unblocks Taiwanese streaming services like iQiyi and KKTV as well as western ones like Netflix, Hulu, Prime Video, and BBC iPlayer.

PrivateVPN uses as-yet-uncrackable encryption, a kill switch, and leak protection to prevent any data from leaking outside of the VPN tunnel. The apps, available for Windows, MacOS, Linux, iOS, Android, and Amazon Fire TV all use a straightforward interface that new users should be able to pick up with ease.

PrivateVPN allows users to connect up to six devices at once. The company keeps no logs of your activity or metadata that could be used to identify you. Live chat support is available.

STREAM PRIVATELY:PrivateVPN punches above its weight class with fast speeds, good security, and the ability to unblock a wide range of streaming services. It comes with a 30-day money-back guarantee.

IPVanish is a US-based VPN with a sterling reputation for security and privacy. Strong encryption, leak protection, and a kill switch keep your data secure. Speeds are decent and should be suitable for streaming in HD. IPVanish doesn’t store any logs of your activity or other identifying information.

IPVanish unblocks Netflix, KKTV, and a handful of other streaming sites. Customer support is available around the clock.

A single plan allows you to connect any number of devices at once. Apps are available for Windows, MacOS, iOS, Android, and Amazon Fire TV.

NO CONNECTION LIMITS:Protect your entire household with a single IPVanish subscription and take advantage of the 30-day money-back guarantee.

In 2009, Taiwan passed a three-strike rule that prohibits P2P filesharing of copyrighted work. Even if you’re torrenting something legally, your internet service provider might see BitTorrent traffic and assume you’re pirating. This can lead to your ISP throttling your connection or terminating service altogether. There are also reports of torrenters being sued by copyright holders.

A VPN hides the contents of your downloads and uploads by encrypting all the data going to and from your device. If you plan on torrenting in Taiwan with a VPN, be sure to enable the VPN app’s kill switch. If the VPN connection drops for any reason, the kill switch will step in and prevent unencrypted data from being sent or received from your real IP address.

All of our recommended VPNs for Taiwan allow torrenting and have kill switches.

Can I use a free VPN in Taiwan?

While there’s no shortage of free VPNs out there, we don’t recommend using them. Free VPNs have several limitations and risks you won’t encounter with paid ones.

Free VPNs usually cap how much data you can use or throttle bandwidth to a low speed, which makes them unsuitable for streaming video or downloading large files. Their servers also tend to be congested with too many users, slowing them further.

Even if a VPN is free to use, it still has to make money somehow. This often happens by injecting ads into your web browser, collecting your browsing and usage data and selling it to third parties, or both. Some free VPNs even distribute malware.

Lastly, free VPNs can’t guarantee the same security or performance. They usually have few servers that can’t unblock streaming services. Many of them lack sufficient encryption and leak protection, or go without encryption altogether.

Stick with paid VPNs if you want to get the job done with peace of mind.

Are VPNs legal in Taiwan?

Yes. VPN use is legal in Taiwan and you are free to download, install, and use a VPN on your devices. However, it is worth noting that Vietnam is a country that engages in high levels of censorship. The government polices the internet to prevent the spread of dissenting opinions, and a decree passed in 2013 prevents citizens from sharing news articles on social media.

Using a VPN to access content that the government has purposely banned could flag you as a citizen with dissenting opinions, which makes it essential to be careful when bypassing government restrictions.

With this in mind, it is vital to stick to recommended VPNs with strong privacy and security measures in place and to use a kill-switch to prevent accidentally exposing your online habits to your ISP and the government if you’re choosing to access news or other content that is critical of the Vietnamese government.

It is also important to remember that online crimes are still an offense, and the use of a VPN to conceal such crimes is still illegal. Thus, it is what you choose to do with a VPN, rather than having a VPN itself, that can be considered illegal.

Finally, we recommend that you do your own research to fully understand the legal and political situation regarding the access of censored content in Vietnam. Nothing in this article should be taken as legal advice, and you use a VPN at your own risk.