Struggling to watch games on NBA League Pass due to blackouts? We’ll explain how to bypass NBA League Pass blackouts in the US with the help of a VPN.
Mark Gill TECH JOURNALIST, VPN AND PRIVACY SPECIALIST 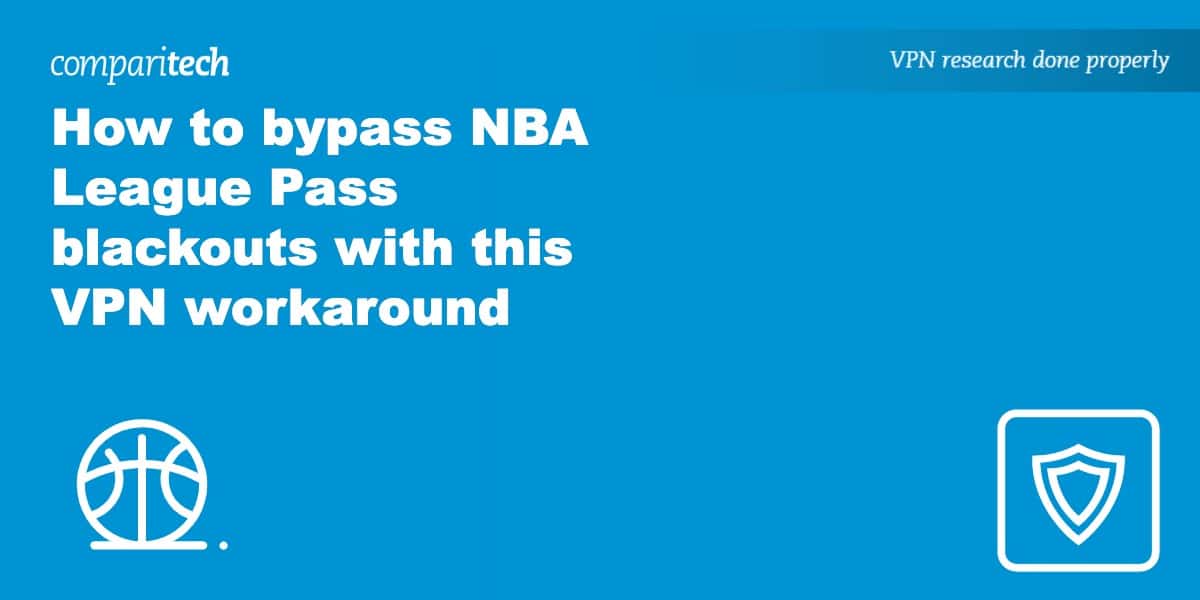 The 2021-22 NBA season started on October 19, 2021 and will run until April 10, 2022. Of course, even after it ends, you have the playoffs to watch! While the NBA League Pass is a great way to watch games, you may find that some games are unavailable (blacked out).

Fortunately, a VPN, or Virtual Private Network, lets you bypass NBA League Pass blackouts by making it seem as if you’re in a different location (but more on this later!) so you can stream your home services even if you’re traveling out of state or abroad.

How to bypass NBA League Pass blackouts: a quick guide

Don’t have time to read the full article? Below you’ll find a quick and easy step-by-step guide on how to bypass NBA League Pass blackouts.

If you have any doubts as to whether blackouts affect your area, use the NBA Blackout Explorer (note: this tool has recently been removed) which lets you enter your ZIP code for further information.

NordVPN is offering a fully-featured risk-free 30-day trial if you sign up at this page. You can use the VPN rated #1 for basketball with no restrictions for a month—great if you want to stream the local teams' matches as you travel.

There are no hidden terms or conditions—just tell customer support within 30 days if you decide NordVPN isn't right for you and you'll get a full refund. Start your NordVPN trial here.

What is a live blackout and why is it used?

Before each NBA season, various local and national broadcasting companies obtain the rights to televise NBA games live. The problem is that when these rights are exclusive, even the NBA can’t broadcast these games live online in that particular geographic market (instead, the games are only available on-demand three hours after they have aired). This means that it’s likely that your local teams’ matches will be blacked out.

Let’s say you’re in Los Angeles and your local Fox or NBC TV station has the exclusive live broadcasting rights to the Clippers and Lakers games. As there’s a local broadcaster in place, these games will be blacked out in LA and as such, unavailable on the NBA League Pass. Likewise, if a game is broadcast nationally on, for example, ESPN or ABC, there will be a national blackout of the game.

Bypass NBA blackouts with a VPN

When we accessed NBA League Pass from New York, the following blackout notice was displayed:

“Based on your current location, you are unable to view live Brooklyn Nets and New York Knicks games. You can listen to a live radio broadcast or watch an archive of these games 3 days after broadcast.”

However, local blackouts are not the only restrictions you’ll face with NBA League Pass. In fact, many nationally broadcast games are not included either:

“Games broadcast on ESPN, ABC, TNT and NBA TV will not be available to watch live on NBA League Pass. You can listen to a live radio broadcast or watch an archive of these games 3 hours after broadcast.”

So how can a VPN help you bypass NBA League Pass blackouts? When you connect to a VPN server, your internet traffic is encrypted. This makes it difficult for websites and services to know your true location. By connecting to a server in another US state or another country entirely, you’ll be assigned a new, temporary IP address. This will trick the NBA League Pass site into thinking you’re in another location, allowing you to bypass the blackout.

You can use your PC or Mac to bypass NBA League Pass blackouts. All you need to do is connect to a VPN server outside the blackout zone. For example, if it’s a local blackout, you’ll only need to connect to a server in another US state.

National blackouts are a little different. In this case, you’d have to connect to a server in another country. Ideally, this should be the country that is geographically closest yet still outside the blackout region. For example, if you’re in the US, you should try servers in Canada and Mexico. The blacked-out game should then be unblocked and it will therefore be possible to watch NBA games without cable. Remember to clear your browser’s cache and cookies if the content doesn’t load.

As with desktop devices, you can bypass NBA League Pass blackouts on mobile. However, it’s worth knowing that the NBA uses your phone’s GPS and location data to determine where you are. As such, some VPNs don’t work, particularly with the NBA League Pass apps. If you’re planning on watching via mobile, try using your phone’s web browser instead.

At the time of writing, the mobile apps of NordVPN, Surfshark, ExpressVPN, and CyberGhost are all able to bypass NBA League Pass blackouts. If you’re still having problems, you can potentially spoof your phone’s GPS location. There are apps that allow you to do this (and Surfshark’s Android app has this capability built-in). However, most third-party GPS spoofing apps will require you to jailbreak your iPhone or root your Android device. Note that there are no guarantees that this will work. The process varies from one device to another and some apps are a security risk so please exercise caution.

Can I use a free VPN to bypass NBA League Pass blackouts?

Unfortunately, many free VPNs are unable to bypass NBA League Pass blackouts. One problem is that they often have only a small number of servers. As such, you may find your options limited when looking for a server in another US state or country. However, another issue is that free VPN servers suffer heavy load. This causes slow speeds, which is a particular problem when live streaming. Some free VPN services even throttle your bandwidth in an attempt to manage this, resulting in lag and buffering when watching NBA games online.

We also recommend against using free VPNs for security reasons. While a free VPN allows you access to all sorts of restricted content, it should also protect your privacy. This includes encrypting your data and protecting your personal information from leaks. Sadly, a lot of free VPNs don’t have such measures in place. After all, a free VPN is a business which means it may log your browsing history, selling it to third parties. You may also be bombarded with irrelevant, inappropriate pop-up ads. Overall, a free VPN just isn’t worth the hassle.