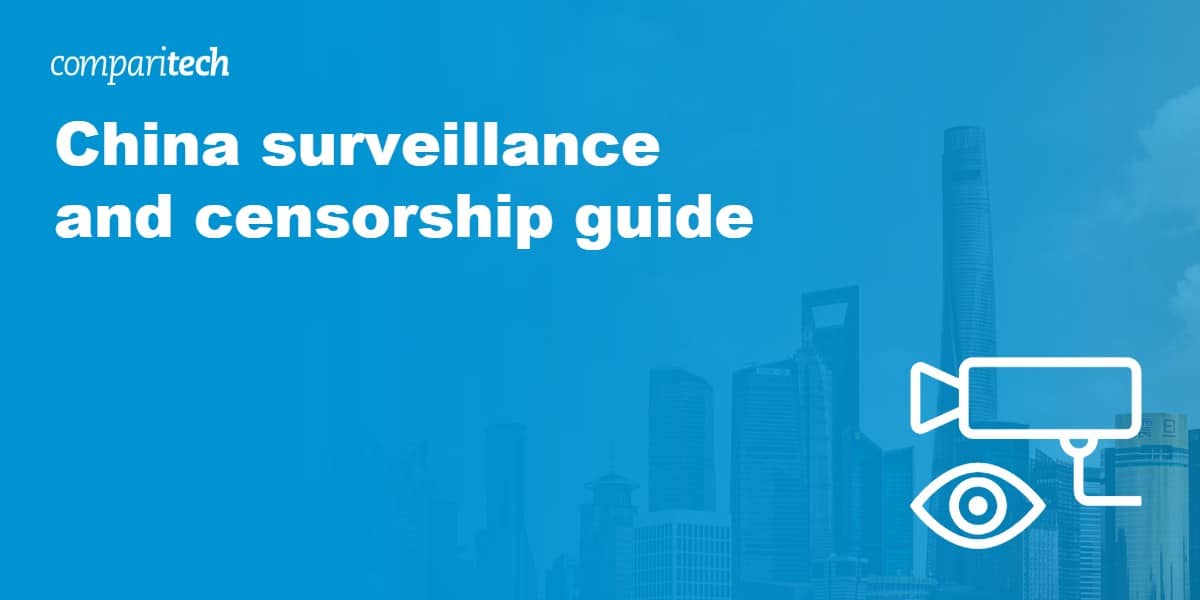 China operates the world’s largest and most advanced web surveillance and censorship system. Through the nation’s telecoms and tech companies, authorities block websites, monitor chat apps, and actively block VPN connections that would otherwise bypass these restrictions. In the physical world, the country employs CCTV and facial recognition to keep tabs on everyone in the country. Internet users are forced to sign up for accounts with their real name and phone number, and their behavior both online and offline can affect their credit score.

In this article, I’ll discuss the various components and policies of China’s widespread surveillance and censorship.

China is perhaps most notorious for its censorship of the World Wide Web. Through government-owned internet service providers, authorities block access to many apps, websites and online services including:

You can find a big list of websites blocked in China here.

Attempting to visit any of these sites or apps will result in a failed connection, unless you have a VPN.

These sites and apps are blocked using the Golden Shield Project, otherwise known as the Great Firewall. It allows state-owned internet service providers to restrict internet connections to a handful of access points so that all traffic in and out of the country can be monitored.

Websites and apps are blocked through a variety of means, including:

Websites and apps are usually blocked permanently, but bans can be temporary. You can check if a website is blocked in China by entering the URL here.

In many high-profile cases, China will first demand that a western tech company comply with its surveillance or censorship demands in order to continue operating in the country. Because China is the world’s largest consumer market, many companies choose to comply.

After Google was kicked out of China for refusing to censor its search results, Microsoft Bing stepped up to fill the gap, removing search results according to China’s requests.

Apple removes many apps from its App Store at the behest of the Chinese government. This includes VPN apps.

To get around web censorship, many people in China use VPNs. Short for Virtual Private Network, a VPN is an encrypted proxy that routes the users’ connection through an intermediary server in a location of their choosing. This hides the contents of the user’s connection as well as the site they’re visiting, allowing access to blocked sites and apps.

China actively blocks both VPN websites and VPN connections. Only a handful of VPN providers still work in China, and they play a constant game of cat and mouse to keep their servers off of Great Firewall blacklists.

If you plan on traveling to China and want to use a VPN to access blocked content, be sure to sign up and download the VPN app, along with any necessary documentation, prior to going there.

Aside from simply blacklisting known VPN servers, China also uses a tactic called “deep packet inspection” to identify VPN-encrypted traffic. This technique can be used to spot and block VPN connections based on their encryption patterns. VPNs that work in China often use traffic obfuscation to make encrypted data look like non-encrypted data, evading the Great Firewall.

China has its own ecosystem of apps, websites, and online services that are mostly exclusive to the country. The most notable example is WeChat, a messaging app that also functions as a social network, e-wallet, and VoIP service, among other features.

The app’s maker, Tencent, is one of the largest tech companies in the country, if not the world. Chinese authorities can monitor conversations and activity on WeChat, such as scanning for sensitive keywords sent between users. That includes messages sent between users in China and other countries.

Financial transactions, calls, and location can also be monitored through the app.

According to our research, China has more CCTV cameras per capita than any other country, and it’s a fervent adopter of facial recognition technology.

CCTV and face recognition are used in tandem to monitor and restrict freedom of movement and assembly. Authorities can look up the identity of anyone who passes by a CCTV camera.

These capabilities can allow authorities to prevent persons of interest from traveling by train or plane, or to publicly shame traffic offenders. Face recognition cameras have been used to surveil and oppress Uighur Muslims in China’s Xinjiang province, for example.

Aside from face recognition, China also stores other biometric data about its people.

Fingerprints are taken from anyone entering China.

Drones equipped with facial recognition were used to monitor people outside of their homes during the COVID-19 lockdown. Tablets were installed at the front of buses to take mugshots and temperatures of passengers.

Internet service providers, internet companies, and phone carriers are required to request and verify the real names of their users when they register an account.

Fake names and parody accounts are not allowed. Real-name restrictions include:

China is years into the process of building a social credit system. The idea is that public and private entities collect and share data about Chinese citizens, businesses, and government agencies. This aggregate data is used to calculate a credit score that can be used to access a wide range of programs and services. The system can also be used to penalize people and businesses who behave poorly, such as those engaged in fraud.

Critics say the social credit system will be used to control all facets of life for Chinese people. Some cities lower the credit score of people found to be playing music too loud, jaywalking, or eating on public transit. Those who criticize or undermine the government on social media might see their scores lowered.

A person’s credit rating might rise if they donate to charity, get a COVID-19 vaccination, pay taxes, volunteer for community service, or praise the government on social media.

People with low social credit scores might be barred from public services and access to credit. A 2019 report stated 27 million airline tickets and 6 million high-speed rail tickets were denied to people whose credit rating was too low. They might not be able to enroll their kids in private school, work at certain companies, or go to a movie theater.

All of these measures combined allow China to surveil people both online and offline, discarding privacy and any option to be anonymous. Online profiles are no longer detached from real-world identities. These techniques are used nationwide but tend to be stricter and more pervasive in places where unrest and tension takes hold, such as the Xinjiang province, home to the country’s Muslim Uighur minority.

Aside from obvious abuses that could and do occur, invasive, constant surveillance creates an atmosphere of distrust, and has a chilling effect on freedoms of speech, expression, movement, and assembly.