Which websites are blocked in China (and how to access them)?

The Chinese government restricts internet access, blocking a ton of popular sites. Find out which sites are blocked in China and how to access them with a VPN.
Aimee O'Driscoll VPN AND CYBERSECURITY EXPERT 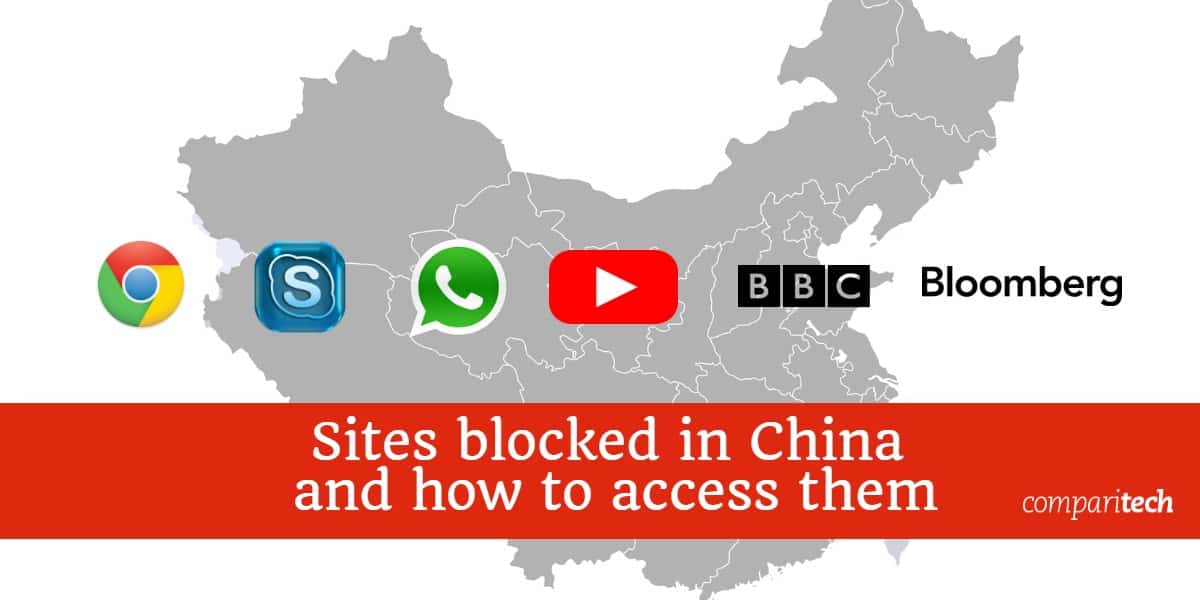 Anyone living in or visiting China knows too well that many popular websites are blocked in the country. The number of blocked sites changes regularly, but some estimates put the number at around 10,000 domains. The Chinese government defends its actions as a means to protect its citizens. However, the restrictions are viewed by many as dangerously oppressive. For those visiting the country for tourism or business, it can be hugely frustrating to not be able to use the same sites and apps as you would back home.

That said, knowing which sites are blocked can help you prepare for what to expect. Plus, having a handy tool to bypass the blocks will make for a stress-free trip. Below we list the most popular websites that are currently blocked in China. We’ll also explain how the blocks can be bypassed with the use of a VPN, and reveal the best VPNs for the job.

Which websites are blocked in China? Top 140+

We conducted a study of the most popular websites around the globe and tested them to see if they were blocked in China. We’ve listed blocked sites by category below. Don’t see a site on the list? You can check if it works in China using our “Blocked in China” tool.

Other sites blocked in China

Note: Most VPN provider websites are blocked (more on VPNs below).

It’s important to bear in mind that even if a domain is not blocked in China, this doesn’t mean you’ll be able to access all the content you want. For example, the Netflix website isn’t blocked in China, but the company does not provide a service in the country, so you won’t be able to watch anything. Similarly, many betting sites are available in China, but due to regional laws, most betting sites will restrict access to accounts and features when they detect a Chinese IP address.

All of this can be circumvented with a VPN, which we will explain in the next section. Although, you should check local laws before using a VPN to access content or perform actions that may be illegal in the country. Find out more in Is a VPN Legal in China?

Thankfully, just because websites are blocked in China doesn’t mean they’re completely inaccessible. Armed with the right VPN, you can bypass China’s Great Firewall and use the internet as if you were outside the country.

A VPN encrypts your internet traffic and routes it through a secondary server in a location of your choice. When you’re in China, choosing a VPN server outside the country will reroute your traffic through that server, hiding which sites you visit. Due to the encryption aspect, the contents of your internet connection are unreadable.

Here’s how to access blocked sites in China with a VPN:

Bear in mind that you may need to troubleshoot if you run into issues. As such, it’s a good idea to download any relevant support material from your VPN provider’s website before you travel and store it offline for easy reference.

An important factor to note is that not all VPNs work in China. The government actively tries to block VPN use in the country via various methods. These include blocking traffic going to known VPN servers and using advanced Deep Packet Inspection (DPI) techniques to detect VPN traffic.

Thankfully, a few top providers work hard to get around these measures so that users in China can continue to access blocked sites. Don’t worry, there’s no need for trial and error. We’ve tested dozens of VPNs to see which ones still work in China, despite the government’s best efforts.

You can read about the best VPNs for China in our dedicated article, but here’s an at-a-glance look at our top picks.

See also: How to use WhatsApp in China