Does WhatsApp work in China? No but here’s a fix.

Looking to stay in touch with friends while in China? Unfortunately, most messaging apps are blocked by the Great Firewall. Read on to find out how to unblock WhatsApp in China with a Virtual Private Network (VPN).
Ian Garland Streaming, Kodi and VPN Expert 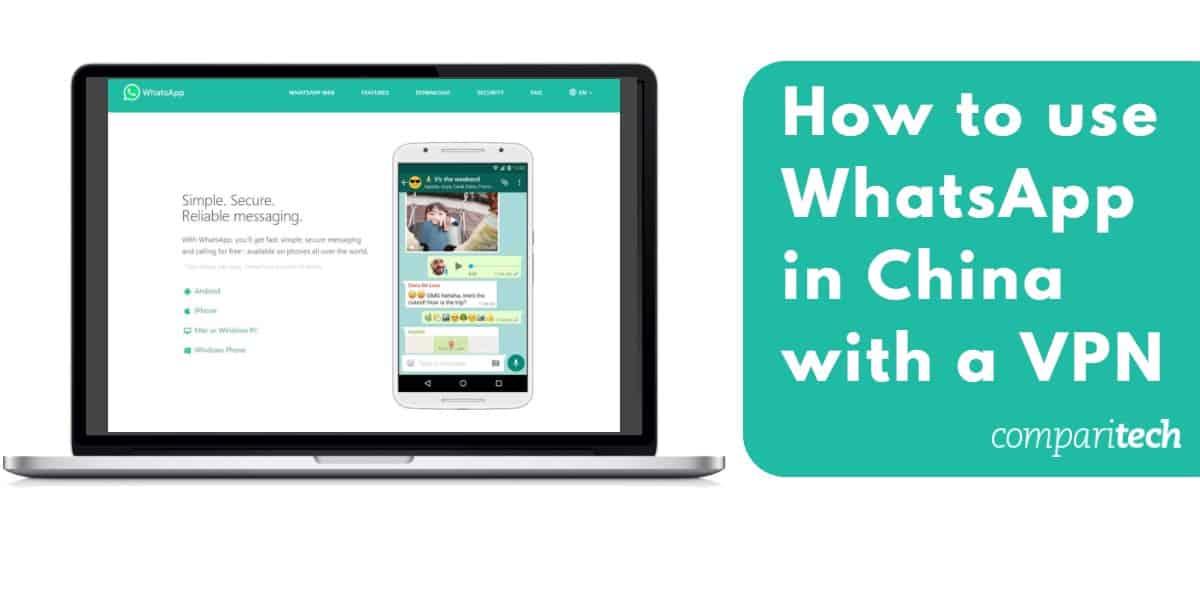 If you’ve never been to China before, you’ll likely be surprised to see just how far the country’s internet restrictions go. As well as censoring websites that show the government in a negative light, China blocks access to services that people use every day, like Facebook, Twitter, and WhatsApp. As such, it can be difficult to unblock WhatsApp in China to contact friends and family, which isn’t ideal considering China has a well-documented history of harassing foreign visitors.

WhatsApp does not work in China due to restrictions enforced by the state’s Great Firewall which censors internet use. While WhatsApp is blocked in China there is an effective solution, using a VPN to evade these restrictions.

Luckily, despite frequent updates to the country’s Great Firewall, there are still a few VPNs that work in China. These encrypt your traffic, ensuring it can’t be read by the government or your Internet Service Provider (ISP). VPNs route your data through a server in another country, allowing you to bypass Chinese internet restrictions and access blocked websites and apps in China.

How to unblock WhatsApp in China with a VPN

With the right VPN, using WhatsApp in China is pretty straightforward. Follow the steps below to install WhatsApp (or any blocked app) when in China.

Here’s how to unblock WhatsApp in China with a VPN:

How to configure a VPN for maximum anonymity in China

By default, most VPNs are configured to provide a balance between speed and security. However, as China keeps such a close eye on its citizen’s online activity, privacy should be your top priority.

We can ensure your traffic stays private at all times by enabling a couple of features. The first is a kill switch, which stops all traffic if you lose connection to the VPN suddenly. We’ll also be activating IPv6, WebRTC, and DNS leak protection features, which prevent personal information from being revealed as you browse the internet.

Below, we’ll explain how to enable these security features in our recommended VPNs:

Let’s start by activating the kill switch (which ExpressVPN calls its “network lock”). Click the menu icon in the top-left and select Options. Now, move over to the General tab and make sure the ‘Stop all internet traffic if the VPN disconnects unexpectedly’ option is checked. 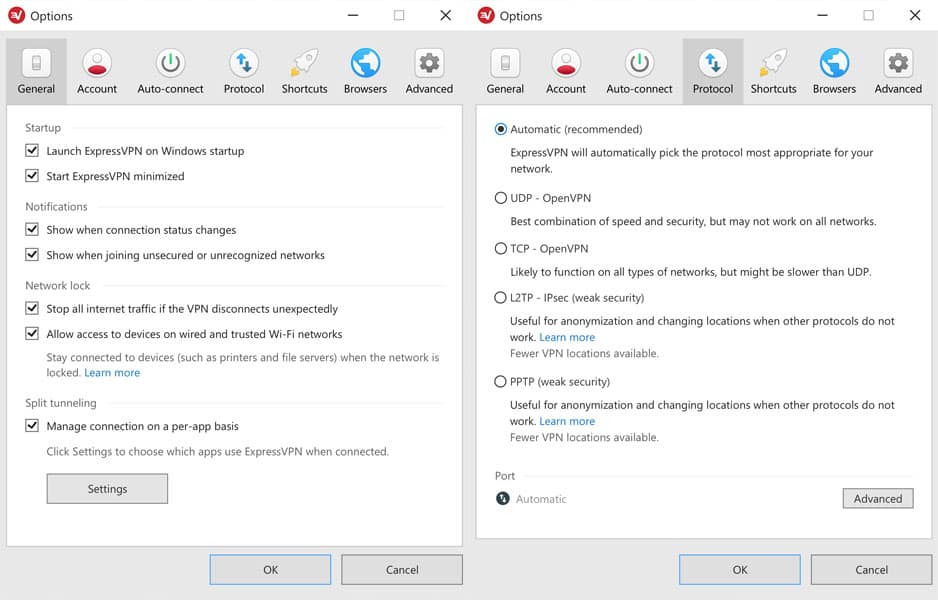 Click on the Advanced tab at the top of the screen. Enable the ‘Only use ExpressVPN DNS servers while connected’ option to ensure that no third parties have access to your data when browsing. Finally, check the box beside Prevent IPv6 address detection while connected. As DNS and WebRTC leak protection are automatically enabled, there’s no need to activate these manually.

This VPN’s DNS, IPv6, and WebRTC leak protection are enabled by default and can’t be deactivated. You will have to enable the kill switch, though. To do so, click the Settings tab at the top of the screen, and enable the Internet Kill Switch option in the General tab. 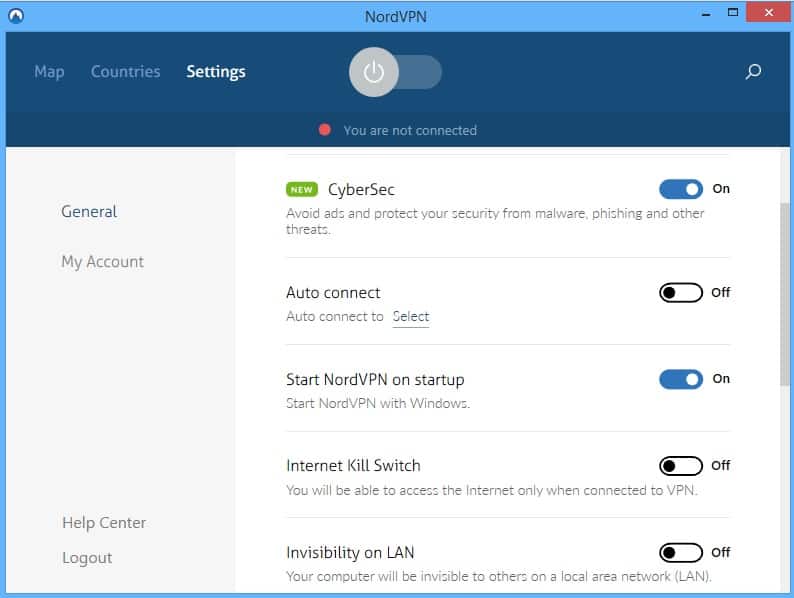 NordVPN has specific servers that are optimized for use in countries with strict online censorship. However, you’ll have to change a setting to let the app know you’d like to use these. Return to the Settings tab, choose Advanced in the list on the left-hand side, and activate the Obfuscated Servers feature.

Now, on the app’s main screen, you’ll see an Obfuscated servers option in the list. Connecting to these will enable you to browse the web as normal and access any website while in China.

Surfshark automatically protects against DNS, IPv6, and WebRTC leaks, so you don’t have to activate these features. To enable the kill switch, click the Settings tab, then the Connectivity button on the following page. Click the Kill Switch option; if it turns green, you’re good to go. If it’s gray, click it again to reactivate it. 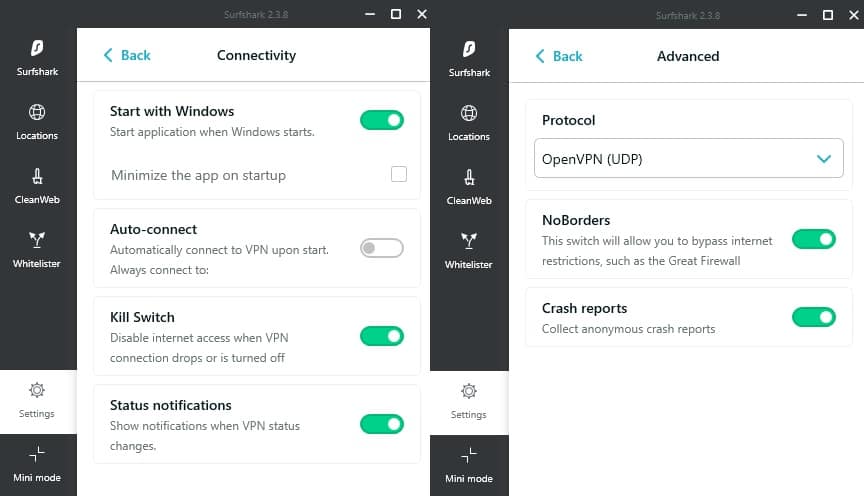 Like NordVPN, Surfshark requires you to change a setting before the app will work in China. This only takes a second, though: just go back to the Settings page, choose Advanced and enable the NoBorders feature.

Is WhatsApp really as secure as it claims to be?

WhatsApp uses end-to-end encryption (E2EE), which means your communications are never transmitted in plaintext. In other words, as only the sender and recipient have the ability to decrypt messages, neither the government or WhatsApp can tell what you’re talking about even if your traffic is intercepted.

It’s important to remember that WhatsApp is owned by Facebook, a company with a pretty terrible record on privacy. In fact, the WhatsApp CEO actually quit due to disagreements over privacy, encryption, and monetization with its parent company. That’s not all: Facebook has been under intense pressure recently, with some politicians claiming that E2EE makes it easier for terrorists to plan attacks.

To be clear, there’s no concrete evidence suggesting that Facebook is able to read your WhatsApp messages. However, despite rivals like Signal embracing a privacy-first approach, Facebook seems unsure as to the best course of action regarding WhatsApp’s encryption.

Why does China censor the internet so heavily?

The main piece of legislation addressing Chinese internet blocking is the Computer Information Network and Information Security, Protection, and Management Regulation. Section One states that these restrictions are intended to “strengthen the security and the protection of computer information networks,” as well as preserve social stability.

The main problems with this bill are that the government is the sole judge of which content is blocked and that the offenses listed are loosely worded, and as such, open to interpretation. For instance, you can be charged with “injuring the reputation of state organs” for reporting on governmental corruption, and the crime of “inciting division” is broad enough to see you arrested for just about anything.

Which websites and services are blocked in China?

As China is constantly upgrading its internet restrictions, there isn’t a complete list of blocked websites. Although, recent estimates suggest around 10,000 domains are inaccessible in China. We’ve listed the types of content that are blocked in China below and a few examples for each category:

If you’d like to check whether a website is blocked in China or not, you can simply enter the URL into our Great Firewall tool. It’s worth mentioning, however, that new sites are added to China’s blacklist all the time. This means that even if a website is currently accessible in China, it might not be when you arrive.

Can I get into trouble for using a VPN in China?

VPNs aren’t illegal in China (or Hong Kong), despite being difficult to access. They’re used every day by businesses to allow remote workers to access company networks, for instance. However, as the country continues to erode its citizens’ rights using facial recognition, sophisticated internet-blocking tools, and politically-motivated arrests, we’ll likely see a surge in Chinese VPN users (and accordingly, stricter regulation) in the years to come.

Protesters and journalists have every right to protect themselves from government surveillance and the harm that can come to them as a result. That said, Chinese data-retention legislation is extremely complex. For this reason, we strongly recommend that you familiarize yourself with the relevant laws before attempting to use a VPN in China.