7 best VPNs to watch NBC Sports Gold outside the US

Most NBC Sports Gold content is only available in the USA. Thankfully, by using a VPN, you can unblock region-locked content and watch NBC Sports Gold from anywhere.
Mark Gill TECH JOURNALIST, VPN AND PRIVACY SPECIALIST 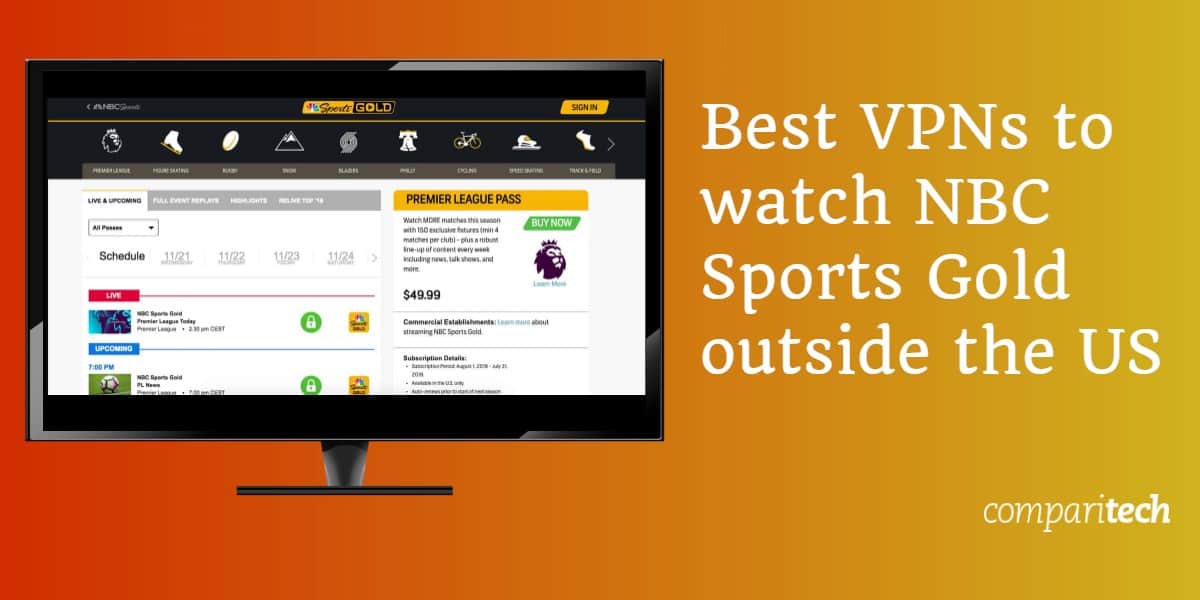 If you’ve already explored some of the sports passes available on NBC Sports Gold, you may have seen that most are only available in certain countries. In fact, several are “available in the U.S. only”. This includes the Premier League Pass, Rugby Pass, Snow Pass and Cycling Pass.

Many websites have geo-restricted content, particularly streaming services such as NBC Sports Gold, DAZN, and Netflix. A VPN can help get around such restrictions. In case you’re wondering, a VPN is a “Virtual Private Network”. It routes your network traffic to the VPN server of your choice, allowing you to bypass blocks on region-locked content. Additionally, a quality VPN provides privacy by encrypting your connection and hiding your true IP address and location.

Before we cover the top VPNs for NBC Sports Gold in-depth, here’s a quick summary in case you’re short of time:

Choosing a VPN can take some time and effort because there are so many options on the market, free and paid. We’ve tried to make things simpler for you by narrowing down the options. In order to find the best NBC Sports Gold VPN, we looked for those that meet the following criteria:

Here’s our carefully selected list of the top VPNs for watching NBC Sports Gold outside the US:

NordVPN is our first choice for NBC Sports Gold. This provider outperforms all competitors in our speed testing and offers more US servers than most VPNs. In fact, NordVPN has over 5,000 servers in 60 countries, 1,600 of which are in the US. You can also use NordVPN to unblock Netflix, BBC iPlayer, and Hulu. Our viewing experience with NordVPN was very positive. The consistent connections allow for streaming in high definition and we didn’t experience any buffering or lag.

In our testing of NordVPN, we had no trouble with the apps, which are simple to use. In particular, the browser extensions make switching servers quicker and easier than ever. NordVPN offers particularly good value since a single account can secure up to 6 devices simultaneously. The security offered includes 256-bit AES encryption, DNS and IPv6 leak protection, and a kill switch. A strict no-logs policy ensures that your private data remains private.

BEST VPN FOR NBC SPORTS GOLD:NordVPN is our first choice. It has superfast speeds and over 1,600 US servers for streaming NBC Sports Gold. It also unblocks Netflix and Amazon Prime Video. Use it on up to 6 devices simultaneously. Offers 24/7 live chat support and strict no-logs policy. A 30-day money-back guarantee makes this a risk-free deal.

Surfshark is a budget-friendly VPN that unblocks most region-blocked content you’re likely to come across. This includes NBC Sports Gold, Netflix, and HBO Go. This is one of the best services for watching United States content thanks to its servers which are spread across 19 US cities. These include Los Angeles and New York. However, the best feature of Surfshark is that it allows you an unlimited number of simultaneous connections.

This VPN is very accessible for beginners with user-friendly apps and even browser extensions. The apps come with a number of useful features such as an ad blocker and the option to allow certain sites and apps to bypass the VPN. Security-wise, Surfshark is as good as any with its no-logs policy and use of 256-bit AES encryption. There’s also protection from DNS and IPv6 leaks and a kill switch.

ExpressVPN operates plenty of high-speed servers across the US, making it ideal for watching NBC Sports Gold abroad. While a high number of servers is important, the quality of the servers and of the overall service should also be a priority. With unlimited bandwidth and no throttling, ExpressVPN provides an excellent browsing experience. NBC Sports Gold videos can be streamed with no buffering or lag. What’s more, we’ve successfully used ExpressVPN to unblock other sports streaming services such as ESPN and DAZN.

Overall, ExpressVPN has over 3,000 VPN servers in 94 countries. This means that you can unblock content all over the world such as in the UK and Japan. This VPN also works well with the likes of Netflix, Hulu, and Amazon Prime Video.

ExpressVPN protects your privacy. This VPN provider doesn’t store any identifiable activity or connection logs of users. Aside from this, ExpressVPN uses 256-bit AES encryption and offers DNS and IPv6 leak protection as well as a kill switch feature. All of this combined makes ExpressVPN one of the safest VPNs on the market. It’s also very reliable with 99.9% uptime.

You can download ExpressVPN apps for the following operating systems: Windows, Mac, Android, iOS, Linux, and routers. Browser extensions are available for Chrome and Firefox.

CyberGhost is a VPN with a rapidly growing network of servers. At the time of writing, CyberGhost has over 5,000 servers online, over 1100 of which are in the US. You’ll, therefore, have no problem finding a server to unblock NBC Sports Gold. We found streaming to be fast and consistent with no buffering or lag experienced in our testing. Another advantage of CyberGhost is that you can use it on up to 7 devices simultaneously, which is more than most VPNs allow.

When it comes to this VPN’s apps, we found them to be very convenient. In particular, CyberGhost can automatically connect you to the best server available, based on your location. Everything is very customizable with the option to toggle features such as an ad-blocker and data compression. CyberGhost has a strict no-logs policy and offers DNS and IPv6 leak protection. Other security features include an automatic kill switch and 256-bit AES encryption.

VALUE AND PERFORMANCE:CyberGhost is a secure, no-logs VPN. It’s also fast with over 750 US servers. Unblocks NBC Sports Gold and Netflix US. Connect up to 7 devices. Includes 24/7 support and user-friendly apps and browser extensions. 45-day money-back guarantee.

IPVanish is a US-based VPN that offers good speeds for uninterrupted streaming. This makes it an ideal NBC Sports Gold VPN. We were able to stream in HD without buffering. IPVanish allows you to connect up to 10 devices simultaneously, far more than most VPNs. Aside from offering excellent value, IPVanish has a good number of servers – over 1,300 in over 60 countries (some 600 of these are in the US).

This is a VPN that can be enjoyed by both beginners and more advanced users. The IPVanish app interface is responsive and simple to follow, though there’s the option of activating more technical features. IPVanish uses 256-bit AES encryption and provides DNS and IPv6 leak protection and a kill switch. A no logs policy ensures your online privacy remains intact. If you have any questions for IPVanish, they offer quick and responsive customer support via a live chat feature.

IPVanish apps can be downloaded for Windows, Mac, Android, iOS, and Amazon Fire TV/Fire Stick. Manual setup is required for Linux as well as routers.

UP TO 10 CONNECTIONS:IPVanish lets you secure up to 10 devices simultaneously. It offers hundreds of US servers for watching NBC Sports Gold outside the US. Live chat support and strong security with encryption and no-logs policy. 7-day money-back guarantee.

PrivateVPN is a VPN that offers great speeds, which makes it another excellent choice for NBC Sports Gold. While it only has around 100 servers at present, 9 of these are located in the US. As such, we’ve found it performs well when unblocking services such as NBC Sports Gold, Netflix, and Amazon Prime Video. You can use this VPN to connect up to 6 devices simultaneously, which is great if you have many devices.

This is a VPN that’s very easy to use, but savvy users have the option of activating more advanced features. PrivateVPN offers all of the key security features expected of a quality VPN including 256-bit AES encryption, DNS and IPv6 leak protection, and a kill switch. PrivateVPN states that it has a zero data logging policy while it also allows for anonymous payment in Bitcoin (providing you use a Bitcoin mixing service).

You can find PrivateVPN apps for the following operating systems: Windows, Mac, Android, and iOS. You’ll need to follow manual setup instructions for Linux and routers.

AtlasVPN is a provider that was launched in 2019. It is a fast VPN provider with servers in 44 countries, including servers in 8 US cities that work to watch NBC Sports, Peacock, and other American TV networks. Plus, it works to access Netflix, Hulu, HBO Max, Prime Video, and many other popular streaming platforms.

The apps are available for all devices, to let you stream NBC on a smartphone, tablet, laptop, or desktop computer. Those apps come with a kill switch, split tunneling, DNS leak protection, malware filtering, and ad blocking. It also provides WireGuard connections, which makes it super fast for streaming and torrenting.

You can try the VPN yourself thanks to its 30-day money-back guarantee. You can also get help via live chat 24/7. However, please bear in mind that this support is only available for subscribers.

How to watch NBC Sports Gold abroad with a VPN

Fortunately, using a VPN isn’t difficult at all. Here’s what you need to do if you want to stream NBC Sports Gold with a VPN:

Can I watch NBC Sports Gold with a free VPN?

Some free VPNs may allow you to watch NBC Sports Gold, but we advise against them for a number of reasons:

What can I watch on NBC Sports Gold?

NBC Sports Gold features a selection of sports that you can watch live and on-demand. Features vary by sport but include live streaming, full event replays, featured video clips, highlights, and interviews.

See also: How to get a US IP address
NBC Sports Gold