How to watch NFL games live online from overseas

Want to watch NFL games online without cable? Today, we’ll explain where you can live stream the 2022 NFL season. We’ll also explain how to watch NFL if you are traveling abroad by using a VPN.
Ian Garland Streaming, Kodi and VPN Expert 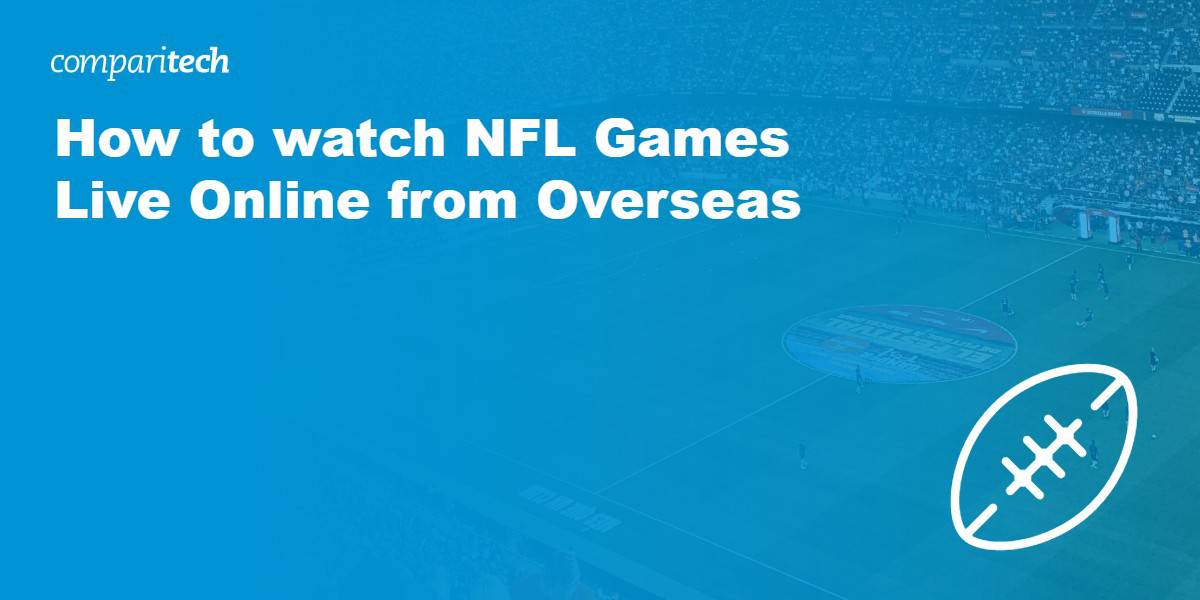 The 2022 NFL season begins on September 8 and will run until January 8, 2023. All in all, there’ll be almost 300 games to look forward to before the playoffs and the match everyone’s waiting for: Super Bowl LVII. Here’s the best part: you can stream all of the action live online (without cable too). Take a look below to find out how.

Note that this post will only be recommending official NFL streams. These provide the highest quality video and there’s no need to worry about the stream dropping out partway through. Besides, there are plenty of legitimate ways to watch the 2022 NFL season, which makes unauthorized streams effectively pointless.

NFL matches will only be shown on geo-blocked streaming platforms. This means that if you’re traveling abroad, you’ll need a Virtual Private Network (VPN) to regain access to your usual channels.

How to stream NFL games from anywhere with a VPN

VPNs enhance your privacy by encrypting your internet traffic but they’re also great for accessing your usual region-locked streaming services while traveling. Here’s how to watch the 2022 NFL season from anywhere:

It’s important you attempt the steps above before the event you want to watch begins. This gives you plenty of time to contact your VPN’s support team should any issues arise.

NordVPN is offering a fully-featured risk-free 30-day trial if you sign up at this page. You can use the VPN rated #1 for NFL streaming with no restrictions for a month. This means it's ideal for those hoping to watch their favorite team's matches during a trip abroad.

While the NFL is huge in America, it has fans all over the world. Which means NFL coverage will be available in numerous locations. Take a look at our country-specific guides below to find out where you can watch all the action live.

The good news is that in America, you can watch every NFL fixture live online. The bad news is that each game will be on one of five different networks. Once you memorize the schedule, however, it’s not that bad. Here’s a breakdown:

There’s one other thing of note: if a game is exclusive to the NFL Network or ESPN, it will also air on local TV stations in the regions that the playing teams are from. If you already get these services as part of your cable package, you’ll be able to watch at no extra cost.

However, if you don’t have cable, there are a couple of over-the-top streaming services that will allow you to watch. First, fuboTV carries all of the above channels and costs $69.99 USD per month. YouTube TV is slightly cheaper, at $64.99 per month and offers the exact same content as fuboTV, having picked up NFL Network recently.

The least expensive option, though, is Sling TV: the Orange and Blue subscription costs $50 per month and lets you watch ESPN, FOX, NFL Network, and NBC live. Better still, your first month is half off!

It’s worth noting that the channels above will only be providing English-language commentary. Spanish broadcasts are split between Universo, ESPN Deportes, and Telemundo Deportes. The first two of these channels are available for an additional $34.99 per month as part of YouTube TV’s Spanish Plus addon or in Sling TV’s Latino plan, which costs $33 per month, without access to the main English-language content library.

The games will be geo-blocked so you will need a VPN to connect to your usual home streaming services while traveling abroad. NordVPN offers a 30-day money-back guarantee so you can try it risk-free.

British NFL fans can stream all of the action live on Sky Sports. If you’re already a Sky subscriber, you can add the required sports channels and watch live on the Sky Go app. Additionally, Monday night games will be shown live at 01:00 BST on Channel 5, which you can watch using the free My5 service.

Want to watch the NFL without cable? The easiest way is with the NFL Game Pass. Short-term subscriptions are pretty expensive, costing £14.99 per week, but you can get a year’s access for £150.99, which works out significantly cheaper in the long run. On the plus side, you’ll have access to every game including the playoffs and Super Bowl.

You can also sign into Sky Sports with a Now TV subscription, but you’ll only be able to watch selected games from the NFL season, instead of the full roster Sky Sports offers. This is also a fairly expensive way to watch, as monthly passes cost £33.99 each.

Finally, there’s BBC iPlayer. Weekly highlights will be shown on BBC2, as will the Super Bowl, but unfortunately, no other matches will be available.

Brits traveling abroad will need a VPN to resume watching on these services when they are overseas.

France has two official NFL broadcasters: L’Equipe and beIN Sports. L’Equipe will show every Sunday game and playoff live, including the Super Bowl. This service is free-to-use, and its premium subscriptions aren’t necessary to stream NFL games.

beIN, on the other hand, will show every fixture live, and allows users to watch previous games on-demand. Prices start at €15 a month, and unlike in previous years, this won’t lock you into a long-term contract.

beIN Sports regularly covers major sporting events in various different languages and has several French-language channels. While there’s no guarantee that the NFL will have French commentary, it does seem likely. One again, to access your home streaming services from abroad you will need to use a VPN.

Movistar+ has exclusive NFL broadcast rights in Spain. Every NFL game will be available, live, via Movistar Deportes, but unfortunately, you’ll have to have Movistar broadband and TV in order to watch anything. If you’re already a subscriber, you can add the sports package for an extra €18 per month, but new customers can expect to pay €90 minimum and will be unable to watch until their services have been installed at their home.

While there is a cable-free offering (Movistar + Lite), this doesn’t include the sports channels that NFL games are being shown on.

The mini-guides above are far from an exhaustive list of NFL sources. If your country isn’t mentioned, there’s still a good chance you’ll be able to watch live. Just check out the full list of international NFL broadcasters to find official sources in your region.

Can I stream the NFL with a free VPN?

Although free VPNs may appear to be an easy way to stay safe online, we strongly advise avoiding them. First and foremost, they aren’t suitable for streaming: with more users than premium services, yet fewer servers, you can expect intermittent connections and choppy, stuttering video, if it buffers at all. These problems only worsen with live HD video, which requires relatively fast speeds to watch. Also, some free VPNs impose monthly data limits, so it’s highly unlikely you’ll be able to watch as much of the NFL as you’d like.

There’s another issue: free VPNs have a history of misleading their users. For example, there are dozens of free Android “VPNs” which simply attempt to install malware, and don’t actually encrypt any traffic whatsoever. We’ve also seen cases where a free VPN provider has abused the trust of its users, including one where users were unwittingly contributing to a botnet. To protect yourself and your personal information, we recommend using a reputable VPN that puts the privacy of its users first.