How to watch NFL on Kodi: Best NFL Kodi addons 2022

The 2022-23 NFL season is upon us! Whether you prefer college ball or NFL pros, you can catch every game live without a cable subscription using Kodi.
Paul Bischoff TECH WRITER, PRIVACY ADVOCATE AND VPN EXPERT There are a few Kodi addons that let you watch live NFL streams. With the regular season fast approaching, we’ve compiled a list of the best Kodi addons for live streaming the NFL in 2022/2023.

But before you start, know that Kodi add-ons can pose a risk to your cybersecurity. Most Kodi add-ons are developed and maintained by volunteers who are not affiliated with the streaming service providing the video. In some cases, malicious add-ons pretend to be legitimate, and updates to once-safe add-ons can contain malware. For that reason, we always recommend using a VPN with Kodi.

If you use Kodi without a Virtual Private Network (VPN), your internet provider can see exactly what you get up to online. This not only comes with some pretty significant privacy issues, but it also allows them to throttle your speeds when you do certain activities (like streaming or torrenting).

The best solution is to use NordVPN, as it provides robust encryption and a choice of servers that work to stream the NFL from abroad or in a blackout state.

WANT TO TRY THE TOP VPN FOR THE NFL RISK FREE?

NordVPN is offering a fully-featured risk-free 30-day trial if you sign up at this page. You can use the VPN rated #1 for NFL with no restrictions for a month. This is ideal if you want to stream NFL matches on your Kodi or while traveling abroad.

There are no hidden terms—just contact support within 30 days if you decide NordVPN isn't suitable for you and you'll get a full refund. Start your NordVPN trial here.

How to watch NFL on Kodi

To watch NFL on Kodi, do the following:

That’s all! You can also bypass geographic content restrictions imposed by some of these services using VPN. We’ll explain in more detail below.

How to stream NFL live on Kodi

Below, you’ll find our list of the best Kodi addons for watching the NFL 2022/2023 season. Most are easily found in the Official Kodi Addon Repository, although given the fast-changing nature of Kodi’s addon development scene, you may need to look elsewhere for some of the most recently updated versions. 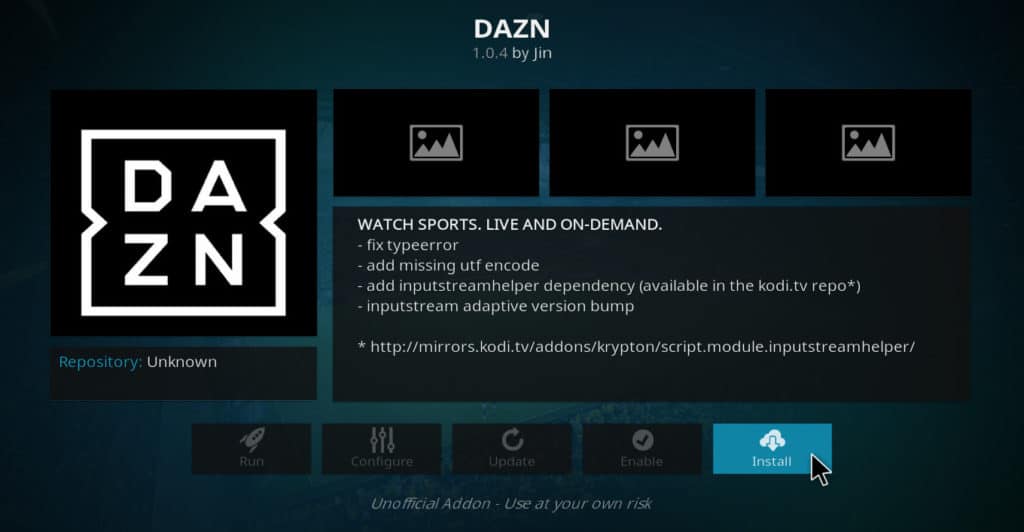 DAZN, or “Da Zone”, is a streaming service originally from the UK. It is now available in a number of different countries, including Germany, Japan, the US, and Canada.

DAZN Canada currently shows every NFL game and costs CA$20 per month. You can find the DAZN Kodi addon in the official Kodi addon repository. Note that you’ll have to create a DAZN account before using it, though, since you can’t watch anything without logging in.

Note: DAZN blocks most VPN connections. However, NordVPN can still access the Canadian library from abroad. Sling TV is a streaming service with a $35 per month plan that lets you watch NBC, FOX, and ESPN. The corresponding Kodi addon is simple and easy to use: just install it from the Official Kodi Addon Repository, log in, and start streaming.

This service is only available in the US, so you’ll need a VPN to get a valid US IP address if you want to watch the NFL via Sling TV from outside of America. 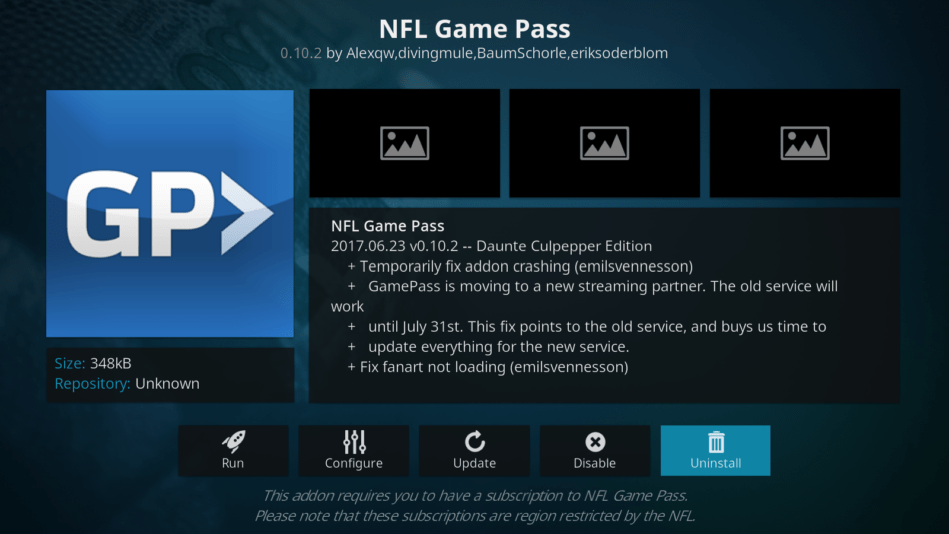 Update: Only NFL Game Pass Europe is currently working with Kodi. You can find the addon here. If you’re outside of Europe, you’ll need a VPN.

NFL Game Pass is naturally a great choice for the 2022/2023 season. However, in the US, it only lets you watch preseason matches. Thankfully, users in other countries can watch most of the regular season live for around $99 USD.

This addon used to be in the Official Kodi Addon Repository but is now only available from the developer’s GitHub account. You just need to connect to your account using your login information, and you’ll be ready to live stream NFL games to your heart’s content.

This also means that you have more options for locations to connect to via VPN if you’re traveling outside of these regions and want to watch NFL on Game Pass. 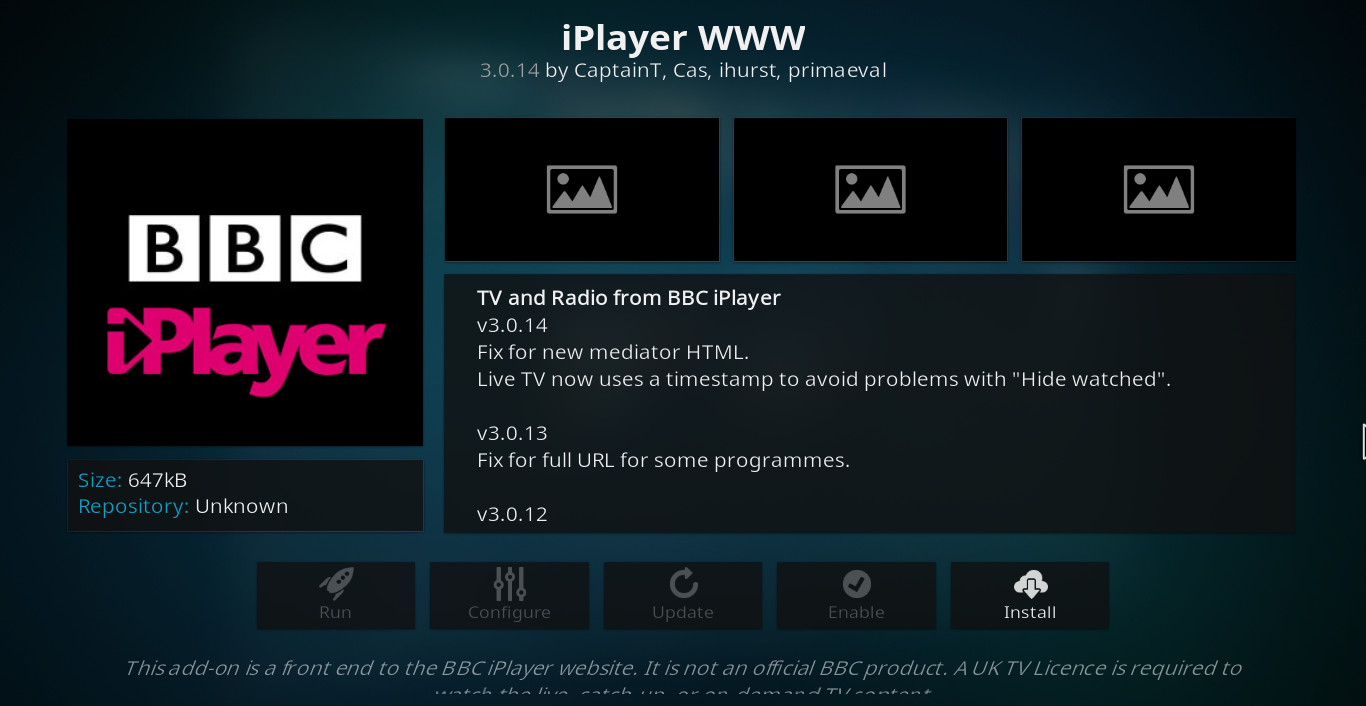 The BBC iPlayer is likely not a service many sports fans consider when it comes to NFL content. However, there is a sizable American Football fanbase in the UK, and the BBC has a highlight show every Saturday at 3:55 PM BST.

Additionally, the Superbowl has been live cast on the BBC for a few years, making its iPlayer a great place to catch the next Superbowl on February 12, 2023.

BBC iPlayer can be accessed by anybody in the UK. Those traveling outside of the UK will need a VPN to get a valid British IP address. This will allow you to bypass the BBC’s region locks to watch iPlayer on vacation from anywhere in the world.

The great thing about iPlayer is that it is a completely free service, and while you do technically need a TV license to stream it within Britain, it is possible to unblock it outside of the UK without needing to provide any information.

The NFL has very expensive contracts in place with the following US-based networks:

This means any streaming service that gives you access to some or all of these will allow you to watch NFL games. Several great streaming options exist that provide adequate, legally-available coverage at a relatively low cost. Those include:

Of these, you’ll find that and OTA digital TV antenna is the cheapest option, but you’ll only be able to watch local games.

Sling TV is probably the best, cheapest option if you want to see almost every game made available through cable TV. Through Sling TV, you can get access to NBC, Fox, NFL Network and ESPN for $50 per month. You’ll need to order Sling’s Orange+Blue package to get all four. The only channel you won’t get is CBS, as CBS restricts its live streaming to only over-the-air antennas and its Paramount+ streaming service.

That said, the other options on the list all come in under $65 per month and provide a mixture of ways to watch most NFL games, including regular season match-ups.

How to safely and privately use Kodi addons for NFL

If you’re looking into streaming NFL games on Kodi, numerous addons will get you there. However, there are notable privacy and security risks associated with both official and unofficial Kodi addons.

Perhaps the biggest risk to all Kodi users is addon hijacking. This is when someone releases malicious updates to a well-known addon and infects the user’s system or turns it into part of a botnet. Kodi addons can also be used to spy on user information, access hard drives, and collect personal information through man-in-the-middle attacks, so this is a serious issue.

Thankfully, you can protect yourself from addon hijacking by turning off Kodi’s automatic updates. To do this, click the gear icon on Kodi’s home screen, navigate to System > Addons > Updates and change the setting to Notify, but don’t install updates.

One of the primary reasons many users turn to Kodi is the prospect of “free” tv and movies. However, the vast majority of Kodi addons that promise this type of content do so through pirated streams. Although there are many legitimate third-party addon developers in the community creating perfectly honest options for Kodi users, a large number of third-party addons focus on pirated streaming.

The problem is that it’s often hard to tell which addons are official and which aren’t, especially when they come so highly recommended on various forums. To this end,  we’ve listed some of the most popular unofficial addons below, not as a recommendation, but as a clarification. We recommend that you steer clear of these illegitimate sources for security and legality’s sake.

Disclaimer: Kodi should only be used for content you have a legal right to access. Neither the Kodi Foundation nor Comparitech advocates the use of Kodi for piracy.

Can I use a free VPN to watch the NFL on Kodi?

No. Generally speaking, free VPNs are much too slow to stream HD NFL games on your Kodi. Free VPNs have very few servers that are massively oversubscribed. This makes those servers very sluggish, which means you will experience high levels of buffering when you try to watch the NFL.

In addition, free VPNs are very easy for streaming providers to spot. This means that streaming services like Paramount+ (CBS), fuboTV, YouTube TV, and Sling TV find it very easy to spot and block those free VPNs. As a result, they will not work to unblock and watch NFL streams abroad (or blackout games within America).

In addition to these performance issues, we recommend staying away from free VPNs for privacy and security reasons. Free VPNs have invasive privacy policies that allow them to track everything you do online for profiling purposes. Those companies will then sell your data to third parties such as marketing companies and data brokers to create a revenue stream.

In addition, studies have revealed that free VPNs lack encryption, suffer from DNS and IP leaks, have server and app vulnerabilities, and engage in shady practices such as hiding spyware in their apps. This makes using a free VPN with your Kodi extremely risky because you will not be getting the privacy or security you expect.