In this comparison, we take a close look at Norton Secure VPN and CyberGhost. We assess features, pricing, and more, to decide which is the best VPN product for you.
Steve Adams 15+ years experience in the tech, privacy and security space 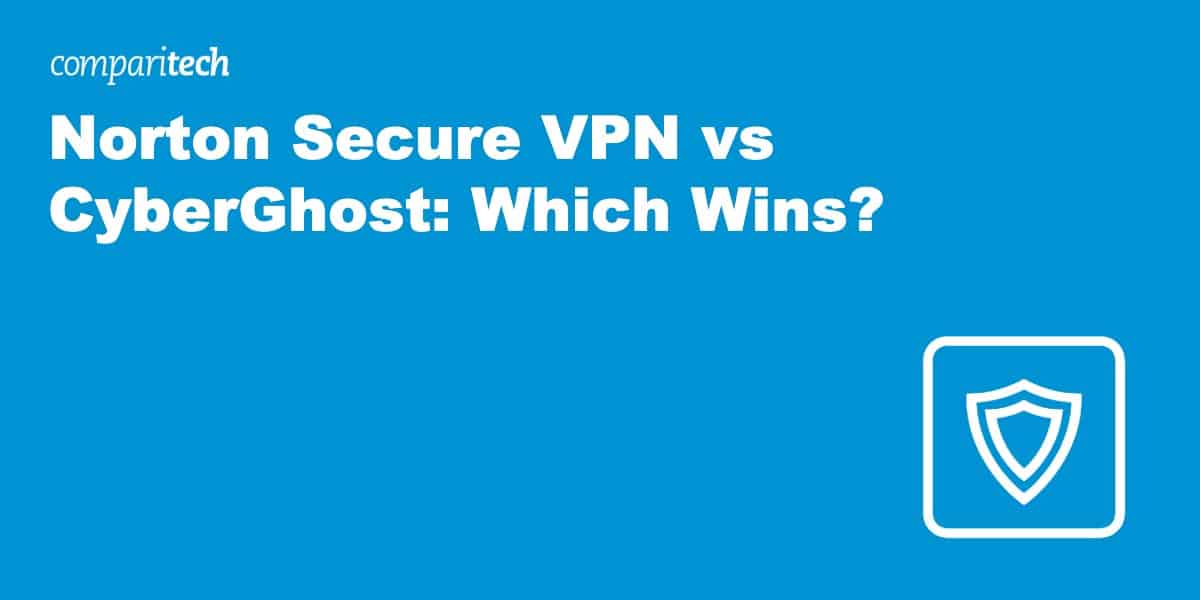 VPN providers are being advertised everywhere, but how do you know which is right for you? We’ve done a thorough comparison of two leading VPN providers, Norton Secure VPN and CyberGhost.

You will find everything you need to know about Norton Secure VPN and CyberGhost, including features, pricing, and performance. All of this information will help to make choosing between these two providers much easier.

Don’t have time to read the whole article and just want the answer? CyberGhost is the better of the two. Keep reading to find out how we came to that conclusion.

Norton Secure VPN only offers annual or monthly plans. Annual plans are the best value as you get $70 (GBP $49.70) off the annual price of $79.99 (GBP $56.71), however this is only for the first year. Norton Secure VPN offers plans for one, three or ten devices connected at once, each at a different pricing tier.

CyberGhost offers big discounts on its multi-year plans, plus additional free months if you go with the two and three year plans.

The value for longer subscriptions via CyberGhost is one of the best deals. Not only do you get a much cheaper monthly rate, but with the three year plan you get an additional three extra months of protection for a total of 39 months. If you’re willing to subscribe for over one year, you really might as well choose the three year plan.

Both of these services include a money-back guarantee, Norton Secure VPN has 60 days and CyberGhost offers a 45 day cooling off period. This means you can try them out and get your money back if you’re not impressed.

BEST DEAL FOR NORTON SECURE VPN:Get up to 81% off your first annual subscription and protect up to five devices.

BEST DEAL FOR CYBERGHOST:Save 83% on a three-year plan and get an extra three months for free.

Norton Secure VPN allows slightly more devices simultaneously connected with 10 on the top tier plan compared to CyberGhost’s seven, but they are both above the industry average of five.

CyberGhost is supported on a range of operating systems and devices, with specialty apps as well as a Linux system installer. CyberGhost has many additional features, including a password manager. Norton Secure VPN does not have any installers for Linux and lacks support for installing on routers and streaming devices.

One of the most sought after features with VPNs is split tunnelling. In effect, this enables you to specify certain programs or websites to automatically bypass the VPN. This can be useful for certain services that will not allow you to connect if they detect you are running through a VPN. CyberGhost’s split tunneling is easy to set up. Norton Secure VPN’s version is only for Windows and Android.

Both come with a kill switch, a feature that cuts off your internet connection if your VPN connection drops out. Also known as a network lock, it helps ensure that the main reasons you got a VPN to begin with, security, privacy, and anonymity, remain even if your VPN were to go down.

If your main reason is to enjoy streaming services, Norton Secure VPN is not the best option. CyberGhost offers access to significantly more streaming platforms and is much more reliable in this area.

CyberGhost also has wider geographical reach in terms of location. Norton Secure VPN is marketing itself more as an internet security tool whereas CyberGhost offers both this and a great streaming experience.

Unfortunately, neither of these VPNs can reliably get around the Great Firewall of China.

Some users have reported that CyberGhost can be configured so that it works in China. You should note that the Great Firewall blocks access to the VPN websites themselves, meaning that you’ll have to subscribe to and install CyberGhost before getting to China.

CyberGhost suggests you set the configuration to L2TP protocol to get best performance but can’t guarantee it will work. Norton Secure VPN just does not work in China and there are no plans for such a feature.

CyberGhost’s desktop version was simple to install. The menus are slick and easy to navigate. Basic settings are clearly available with both programs offering a quick tour of the software upon first opening. Norton Secure VPN had to be installed along with a suite of other Norton products and required several device restarts and requested permissions on multiple occasions.

Both providers also offer mobile apps that make it easy to use a VPN on your smartphone.

There’s no comparison here: CyberGhost has a much larger network than Norton Secure VPN, including coverage in more countries and more total servers.

This is important information for you as the end user. For VPN providers, more server locations can mean quicker speeds. This gives you the best performance with low-latency and a high-speed connection. It can mean you’re more likely to be closer to a server which equals better connection speeds compared with one further away.

Below, you’ll find a list of every country where these VPNs have servers:

CyberGhost has servers all over the world and is present in over three times as many countries as Norton Secure VPN.

This can be a benefit for both speed and avoiding downtime. When services like Netflix or similar issue IP bans, server bans or similar, the more servers mean the less likely you will get affected when comparing CyberGhost versus Norton Secure VPN. It is also more likely that you will get a closer server to where you live, improving speed and lowering latency.

Both use 256-bit AES encryption, which given current technology (and allowing for future advancements) is practically impenetrable. Both VPNs use OpenVPN protocol by default. CyberGhost has several other protocols to choose from, whereas Norton Secure VPN does not give such an option.

256-bit AES is the current gold standard for encryption, even used by governments and intelligence services worldwide. The higher the number, the higher the possible combinations of numbers needed to try and unveil a single encryption key. With 256-bit AES you’re looking at 115 quattuorvigintillion possibilities.

Both products offer a kill switch but CyberGhost offers it on all platforms.  A kill switch stops all data transferal whenever you lose VPN connection suddenly, ensuring you never browse without protection. Additionally, CyberGhost’s VPN uses private DNS servers, meaning no third party ever has access to your internet traffic.

There have been reported instances of DNS information leaking by people testing Norton Secure VPN. This is a major issue and means it is possible to track your internet connection via the DNS information.

CyberGhost is located in Europe and complies with the GDPR through national legislation.

As the developer of Norton Secure VPN, Symantec, is based in the United States, there are serious privacy concerns. This is because the United States is part of an international information-sharing network called the Five Eyes. This means that the intelligence agencies of these member nations will share information and can compel private businesses to give up customer information.

Norton Secure VPN’s information page states that it keeps limited logs of your activity and claims that none of it can be used to identify you. This information is used for communication purposes, mobile device data, and aggregate bandwidth usage.

CyberGhost does keep limited logs, but this is in line with most VPNs that use limited logging to keep track of basic data and enforce their device connection policies. As such, whichever of these services you use, you’ll be nearly completely anonymous online. If you’d like even greater privacy, you can sign up with a throwaway email address and pay with cryptocurrency.

These VPNs use shared address allocation. This system allows everyone to connect via one IP address that is shared. This means individual user connections are mixed together and appear all as the same IP address, accessing multiple sites at once. CyberGhost allows you to add a dedicated IP for an additional charge. Unfortunately, this isn’t an option for Norton Secure VPN users.

Both companies have a live chat feature that enables you to ask questions directly to the support team for simple items. More in-depth issues are better suited to Norton’s contact form which is a ticket system done via email.

There might be times when users can’t access live chat (if they’re in China, for instance). With this in mind, we sent both services three questions over email and through the contact form. You’ll find the average response time below, as well as whether our question was answered or not:

These services had a similar average email response time. Replies were easy to follow, and both linked to their websites for step-by-step guides. If live chat is unavailable for any reason, these questions can be answered by email.

There is a lot to like about Norton Secure VPN, but it doesn’t compete with CyberGhost in many areas, and that’s why CyberGhost is the winner of this comparison.

CyberGhost doesn’t just have a significantly bigger network of servers than Norton Secure VPN, it has more servers than most of the market. Its faster speeds and better performance during streaming make it a great choice for users looking for reliability.