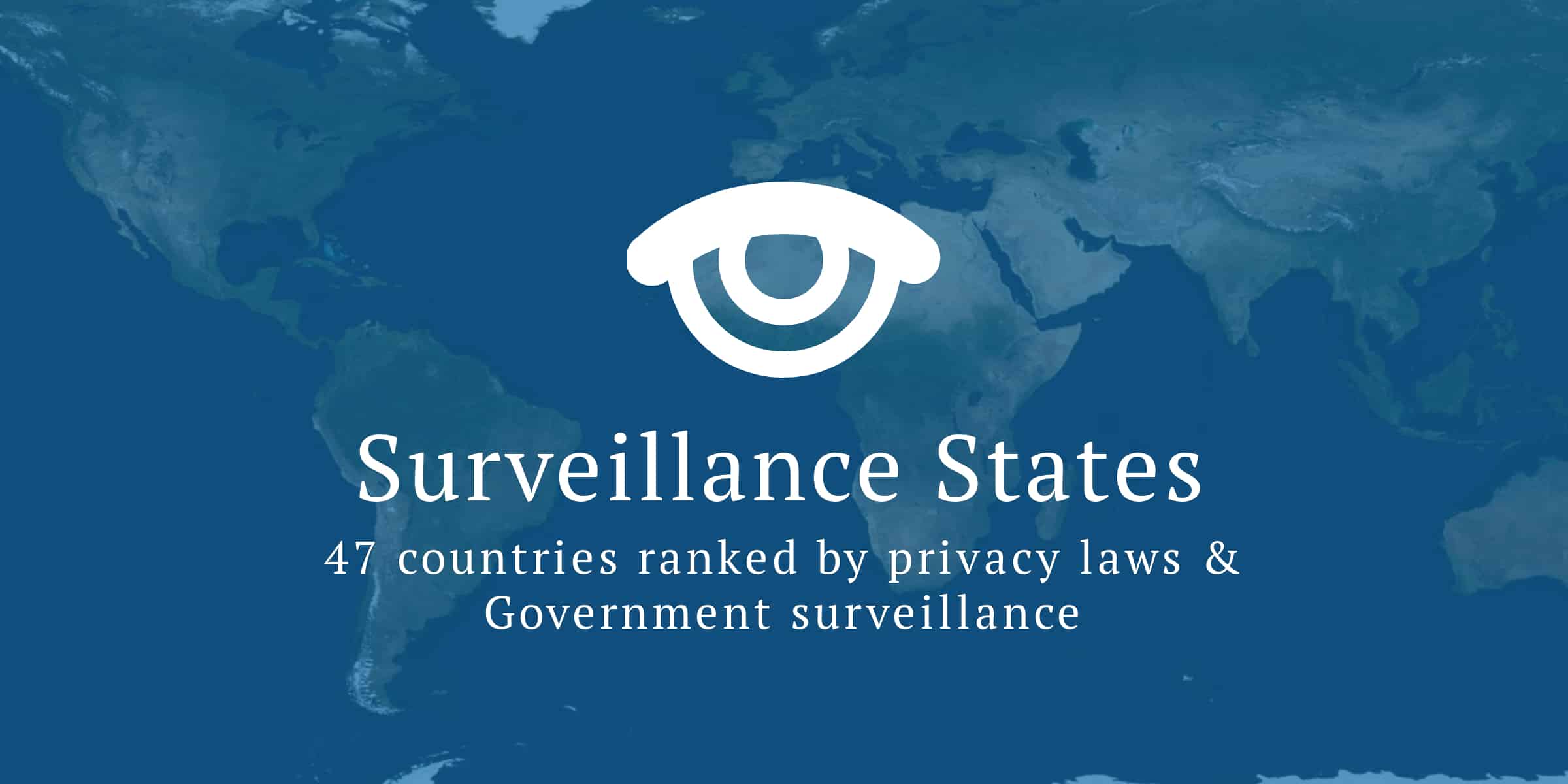 Comparitech has assessed privacy protection and the state of surveillance in 47 countries to see where governments are failing to protect privacy and/or are creating surveillance states.

To do this we looked at a number of categories, from the use of biometrics and CCTV to data sharing and retention laws.

Not one country is consistent in protecting the privacy of its citizens, most are actively surveilling their citizens, and only five could be deemed to have “adequate safeguards.”

Are things improving or getting worse?

In the EU, the General Data Protection Regulation (GDPR) is helping improve privacy laws, on the whole. However, it doesn’t prevent some countries from entering into agreements that encroach on residents’ privacy through data sharing with other countries, e.g. the Treaty of Prüm. It doesn’t stop some countries from increasing their use of biometric surveillance, either.

Outside of the EU, several countries are creating what can only be described as surveillance states, with privacy rights seemingly taking a serious back seat. Perhaps unsurprisingly, China and Russia are the biggest culprits.

How do countries like the UK and US fare?

We’ll find out below.

Here are some notable findings from the study:

Scoring system (for each category and overall)

2.6-3.0 = Some safeguards but weakened protections

China’s ranking isn’t much of a surprise but where does its extensive surveillance arise from?

It is difficult to draw any positives from China’s privacy rights. Even if they are mentioned in law, the reality is often very different.

Closely following China is Russia, with its poor score coming from:

Again, it’s hard to find anything constructive within Russia’s “privacy policies.” On the same day that the European Court of Human Rights (ECHR) ruled against Russia, Russia introduced a new law that allows it to overrule decisions made by the ECHR. And although Russia has fined Facebook because it failed to comply with its local data privacy law (which requires all foreign and domestic companies that are processing, storing, or accumulating data of Russian citizens to store this data on a server within Russia), it is questionable as to how much this relates to privacy and how much this relates to control over data.

We have marked Russia relatively well for workplace monitoring because there are safeguards in place and Russia should, in theory, apply the case of Barbulescu v. Romania (employees should always be notified of monitoring) because it’s a member of the ECHR. However, as noted above, there are no guarantees this will happen.

A number of concerning aspects of India’s laws and regulations threaten citizens’ privacy, including:

What is clear is that the laws and courts of India are starting to protect data privacy. For example, the courts changed the law so private companies did not have the right to request ID numbers, and government agencies’ access to the Aadhaar database has been recently withdrawn. Covert surveillance will also be banned when the new data protection law comes into power. However, with surveillance tactics and biometrics already going incredibly far, it’s questionable as to how much a law will change things.

Thailand recently implemented the Personal Data Protection Act (PDPA) on May 28 2019. It is hoped this will create Thailand’s very first consolidated data protection act but people are being given a one-year grace period to adjust to these new laws. Workplace monitoring and data retention policies should improve. A recent development (which happened post-study) also means Thai cafes are being forced to create a log of customers’ browsing data for 90 days – at least. The government has suggested that this is to help identify users who are violating Thai law and are creating “fake news.”

The introduction of the data protection law in 2010 did make some improvements to Malaysia’s data privacy – but, as technology advances and times change, these need updating to better protect all types of data, including biometrics.

Italy fails to uphold privacy protections in a number of areas. This includes:

The Italian regulatory body in charge of enforcing the GDPR, Garante, hasn’t been very active. This could be due to there being a lack of data breaches or it may indicate a lack of implementation. However, Italy has made efforts to prohibit workplace monitoring.

GDPR is helping to make some improvements in Hungary, for example, helping enforce people’s rights when it comes to CCTV footage and protecting data as a whole through fines given by The Hungarian National Authority for Data Protection and Freedom of Information.

With the highest record of human rights violations per capita in Europe, Slovenia is constantly being monitored to see if and how it is improving the protection of its citizens. We’ve found:

Although the GDPR should, in theory, improve things in Slovenia, there are reports to suggest that it isn’t being properly implemented in many EU countries. And with Slovenia’s lack of laws, this is likely the case. Equally, the draft bill proposed by Slovenia has been criticized by many as “overstepping” the boundaries put in place by GDPR.

Again, Spain’s data protection authority, the Agencia Española de Protección de Datos (AEPD), has been effective in implementing the GDPR laws, fining La Liga €250,000 for privacy violations. However, the privacy rights of its citizens are significantly reduced due to:

As the only non-EU country to be found to have “adequate safeguards,” Norway is succeeding at:

Biometrics do let Norway down. It is looking to introduce them into ID cards in 2020 and law enforcement does have access to biometric data. Norway is also a member of the Schengen Agreement and parts of the Treaty of Prüm.

South Africa is in the process of introducing an Information Regulator and the Protection of Personal Information Act (POPIA) which will help to further enforce privacy rights. But as these aren’t yet fully in place, it does create some gray areas. Biometrics are also on the rise and the newly introduced South African ID card contains fingerprints.

Despite Switzerland being a “tax haven” for many years, it is now clamping down on this by sharing tax details with other countries. It is also part of the Schengen Agreement and has signed an agreement with member states of the Prüm Decision so they can share data. Switzerland also allows workplace monitoring without permission, so long as an employee is informed.

Argentina’s mandatory ID card does contain biometrics. Biometrics are widely implemented and accepted on the whole. The Data Protection Act is in need of an update, particularly when it comes to data retention laws (there are no clear guidelines as such, leaving it very open to interpretation). Argentina also actively shares personal information with other countries

Canada’s regulatory body, the Office of the Privacy Commissioner of Canada, is criticized as being lackluster in its authority but there are talks to improve its powers so it can levy fines. Biometrics are on the rise with fingerprints now being a requirement for people applying for certain kinds of visas. Data sharing is also an issue due to the agreements Canada has with other nations (approximately 17). And Canada recently ruled against a journalist, requiring him to disclose a source.

Due to the recent implementation of the GDPR laws, there isn’t much difference in the scores of EU countries. What tends to differentiate them is their data-sharing agreements with other countries, their freedom of speech, their use of biometrics, and other country-specific rules and regulations.

The categories that let Ireland down were its weakened protections for sensitive data (i.e. several data breaches in the medical industry), the subsidization of CCTV, and a threat to press freedom due to the concentrated ownership of media outlets.

Just behind Ireland is France, which scored reasonably well because of:

However, France is a member of the Treaty of Prüm and the Schengen Agreement. There is active data sharing occurring within France, too. For example, suspicious transactions must be reported as part of anti-money laundering laws. Communication data is retained for one year.

Portugal also makes the top three due to:

Portugal was one of the last European countries to implement the GDPR law (one year and three months after it was enforced). It is also a member of the Treaty of Prüm but, due to its lacking DNA database (less than 0.1% of its citizens are on it), it doesn’t share much information and only shares data with select countries. That said, it is also a member of the Schengen Agreement and data is regularly shared internally, too, i.e. for anti-money laundering laws.

Denmark receives its score of “adequate safeguards” because of:

Yet, there is a worrying acceptance of both biometrics and CCTV cameras within Denmark which may allow privacy controls to slip. The sharing of data, both within Denmark and with other countries (part of the Schengen Agreement) also lowers the score, as do the queries over data retention (location data from mobile phones).

Although Malta does make the top 5, it does also fall into a lower category than the other four EU countries. It received a “some safeguards but weakened protections” score due to:

Malta is, however, a member of the Treaty of Prüm and the Schengen Agreement and does have weakened protections when it comes to communication interception and sensitive data. It also has a systemic failure to uphold safeguards when it comes to democratic issues like freedom of the press (the majority of media sources are owned by politicians).

Where do the US and UK rank?

The US is seventh from bottom in our non-EU rankings. This is due to:

Data protection in the US is governed by multiple sectoral laws and laws also differ by state. This can cause some confusion and inconsistency, and it can leave some huge gaps in certain areas/states. Nevertheless, some of the governing bodies actively pursue data privacy. For example, the Federal Trade Commission (FTC) recently fined Facebook $5 billion for privacy violations.

At present, the UK is governed by GDPR laws but has also implemented its own Data Protection Act, which will remain in place post-Brexit.

Despite some of these safeguards, the UK is moving toward more biometrics, more CCTV, and could involve itself in further international treaties post-Brexit. It has recently joined the Prüm DNA framework, which allows law enforcement agencies to share DNA profiles and fingerprints, giving member states access to the UK’s database of over 5 million people. Workplace monitoring is also accepted (if employers can justify their reasons for doing so) and there have been cases of employees being fired for things they have said on social media.

If we merged the rankings of both the EU and non-EU countries, the leaderboard wouldn’t look much different to the EU one. All that would change is Norway taking second place, pushing Malta out of the top five.

What is interesting about these top five (the only ones to receive an “adequate” score) is that they are all governed by the GDPR laws. So, while there is still huge room for improvement in all countries, the GDPR laws do seem to be encouraging them to move in the right direction.

Each country was given a score per category based on a number of criteria (listed below). Then, to gain an overall score, we added up the total of these scores before dividing by 14 (the number of categories in total).

For each country’s report, sources, and scores, please see this spreadsheet: https://docs.google.com/spreadsheets/d/1uPCfyzwT2b47oX0kcYg3kn3V4H6IWUikp4jMOVUWmJA/edit?usp=sharing