Is T-Mobile throttling your bandwidth? How to bypass throttling with a VPN

If you believe T-Mobile is slowing down your internet speed on purpose, either on desktop or mobile, then a VPN might be able to help. We'll show you how to stop your ISP from throttling your data.
Paul Bischoff TECH WRITER, PRIVACY ADVOCATE AND VPN EXPERT 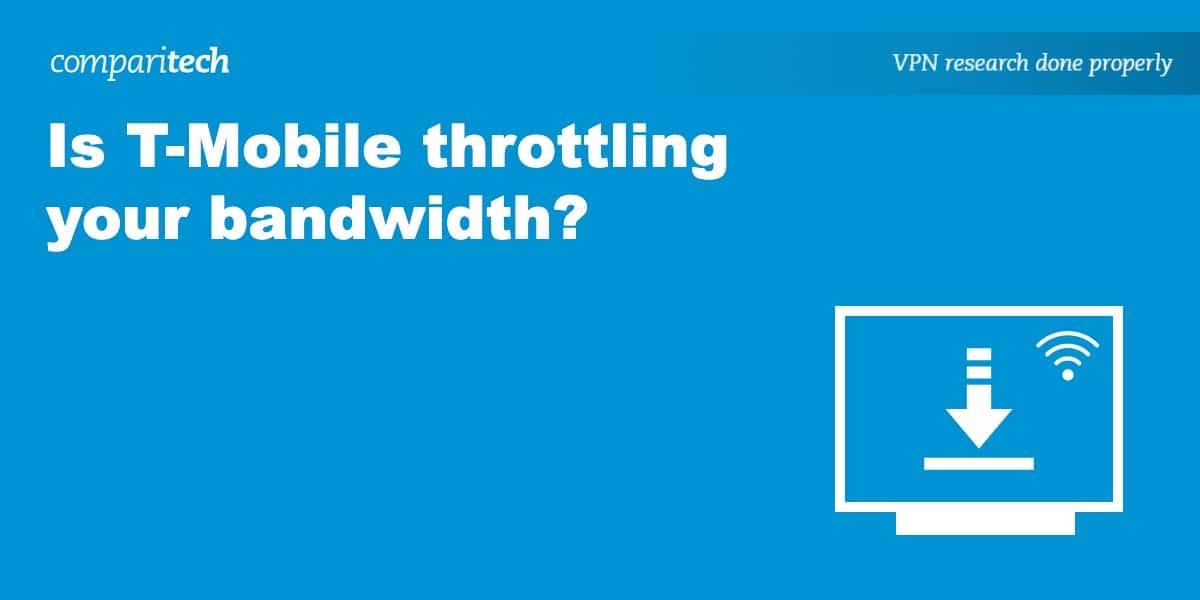 Bandwidth throttling occurs when an internet service provider (ISP), such as T-Mobile, intentionally slows down a customer’s internet connection, but does not terminate it entirely. An ISP could have several justifications for bandwidth throttling:

So a VPN prevents T-Mobile from discriminating against specific sources or types of data, such as certain streaming sites or BitTorrent downloads.

How to prevent T-Mobile from bandwidth throttling

Getting set up is simple: sign up, install the VPN app, and pick a server location. If you think T-Mobile is throttling your bandwidth, follow the steps below.

NordVPN is offering a fully-featured risk-free 30-day trial if you sign up at this page. You can use the VPN rated #1 for T-Mobile with no restrictions for a month. This is perfect for resolving your throttling problem and accessing your usual content on a short trip abroad.

A VPN is not guaranteed to stop bandwidth throttling, but it can work in many instances. Some VPNs, such as NordVPN, come with a money-back guarantee so you can try them out risk-free.

T-Mobile officially does not discriminate against specific types of internet traffic or sources of data. But customers in recent months have complained about T-Mobile slowing video streams and limiting their resolution, choking speeds on so-called “unlimited” plans, and throttling data to tethered devices.

Here’s what T-Mobile says on its website about throttling:

To provide the best possible experience for the most possible customers on T-Mobile-branded plans, we implement network management practices on a content-agnostic basis, such as caching less data, prioritizing data usage, and video optimization. These practices do not discriminate against offerings that might compete against those offered by T-Mobile or any T-Mobile affiliate on the basis of such competition.

If T-Mobile discriminates against specific types or sources of data, or if it restricts torrenting or streaming to alleviate network congestion, then a VPN can help.

But if you’ve exceeded your data cap, then a VPN won’t help. The total amount of data transferred will pretty much remain the same whether you’re connected to a VPN or not, and all that data is still sent through T-Mobile’s network.

How do I know if T-Mobile is data throttling?

To find out if you’re being throttled, you first need to know what speeds T-Mobile has promised you. Look through your T-Mobile plan’s details for data caps, bandwidth limits, and other fine print.

Once you know how much speed you’re supposed to get, test it out. Speedtest.net is our preferred testing site.

If your download speed is significantly less than what’s in your plan, then you might be being throttled. Note, however, that this could also indicate an issue with your or T-Mobile’s equipment. Check to see if speeds dip at certain times of day or during certain online activities.

If your speed test results are notably higher than what you get when torrenting, downloading, or streaming, then those specific activities could be throttled.

Try connecting to a VPN and testing your speed again. If your speeds are much higher while connected to the VPN, then it’s very likely that your ISP is bandwidth throttling.

Is it legal for T-Mobile to throttle my bandwidth?

The Federal Communications Commission (FCC) under the Trump administration repealed the Open Internet Order, an Obama-era rule that stipulated ISPs treat all internet traffic the same. ISPs are now allowed to discriminate by application, device, content, or service.

But even though it is legal, T-Mobile says it does not discriminate against particular devices, content, or sources of traffic, and that it adheres to basic Open Internet principles.

Unfortunately not! While free VPNs are understandably tempting, they’re best avoided for a number of reasons. In particular, the majority of free VPNs engage in bandwidth throttling. That’s because they have too many users and not enough servers to go around. In order to manage their network, they’ll resort to slowing your connection. This allows a free VPN to have more users per server and potentially make more money (be it through ads or by selling your browsing data!).

For this reason, you’re best off sticking with the best paid VPNs which offer unlimited bandwidth. Then you don’t have to worry about negative consequences during more bandwidth-intensive activities, be it streaming or torrenting.