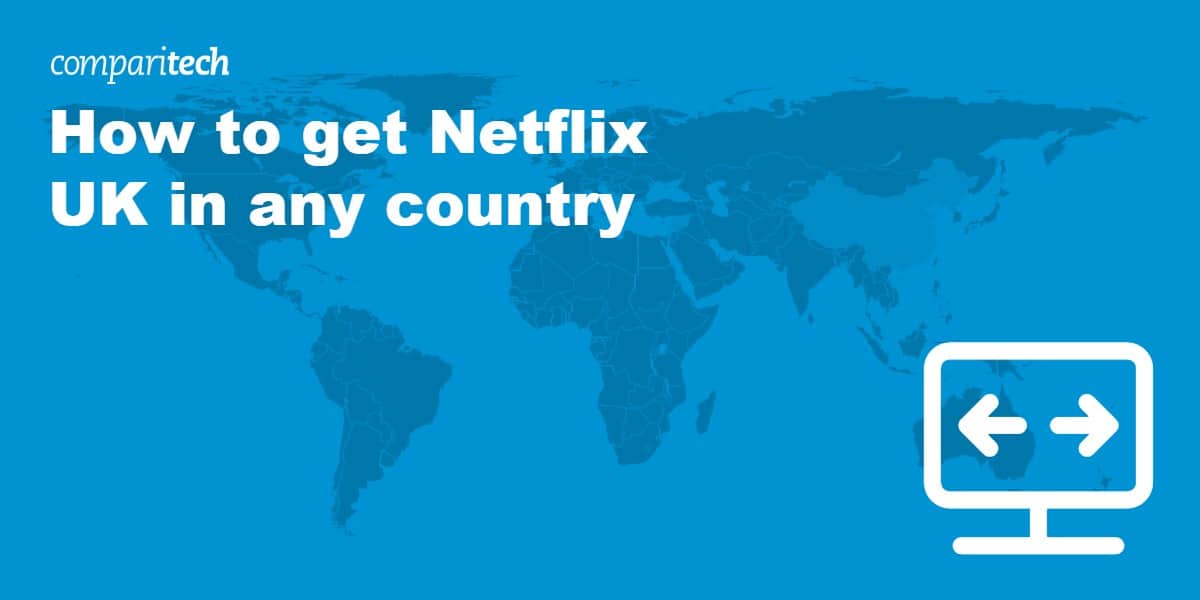 British Netflix might not have as many titles as its American counterpart, but Netflix UK has several movies and TV shows not available to Netflix subscribers in other parts of the world. This means that British travelers could find themselves unable to continue streaming their favorite shows while on vacation. In this article, we’ll show you how to get British Netflix in any country and recommend some of the best VPNs for Netflix UK.

A VPN, or Virtual Private Network, encrypts all of the internet traffic from a device and routes it through an intermediary server in a location of your choosing. By connecting to a VPN server in the UK, for example, you can securely access the Netflix UK catalog of shows.

Netflix has caught on to this tactic and has resorted to blocking connections from known VPN servers. That means not all VPN providers will work with Netflix UK. If you attempt to access Netflix using a blocked VPN or some other proxy service, you’ll receive the following error:

We’ve researched several providers to figure out which are the best VPNs for Netflix UK. We curated our list based on the following criteria:

Note that even if a VPN provider works with Netflix, it’s possible that only a small subset of servers can do so. For this reason, we recommend you contact your VPN provider’s customer support to ask which is the best VPN server for watching British Netflix from abroad. Furthermore, we cannot vouch for whether or not they work with the Netflix apps for Android, iOS, and media consoles.

ExpressVPN can securely access Netflix UK, as well as Netflix US and Netflix Canada. Not all servers work with Netflix, but a quick chat with ExpressVPN’s live customer support will point you in the right direction. Better still, this is an exceptionally speedy provider and permits up to five connections at a time.

ExpressVPN apps are available for Windows, MacOS, iOS, Android, Linux, and certain wifi routers. A router VPN is a good option for those who like to watch on media streaming devices, smart TVs, and game consoles that don’t natively support VPNs. Every ExpressVPN subscription comes with MediaStreamer, a smart DNS proxy service that can be used independently of the VPN to stream Netflix.

NordVPN works with several regional libraries Netflix including the UK, US, France, India, the Netherlands, and Spain. To find out which servers work with Netflix, you can search NordVPN’s knowledge base or shoot a message to the live customer support. NordVPN can also securely access plenty of other streaming services including Amazon Prime Video, Sky Go, and BBC iPlayer.

PrivateVPN works with British Netflix, and more than a dozen other regional libraries. Despite its relative youth and small server network compared to others on this list, PrivateVPN makes it easy to use platforms like Amazon Prime Video, Sky Go, and BBC iPlayer securely as you travel.

VyprVPN can securely access Netflix UK, US, and Japan. This veteran provider owns and operates many of the servers on its network, ensuring fast download speeds for seamless video streaming in high quality. Not all servers work with Netflix, but you can simply chat with a live customer service agent to find out which ones to connect to.

Up to five simultaneous connections are permitted. Apps are available for Windows, MacOS, iOS, and Android.

SaferVPN has specific servers for securely accessing UK Netflix. Just open the app and choose the server that says “UK Streaming” to get started. SaferVPN also makes it easy to watch Amazon Prime Video, Sky Go, and BBC iPlayer. Thanks to the simple and intuitive interface, there’s no need to consult the website or customer service to figure out which servers are working with Netflix. If you encounter any issues, however, 24/7 live chat support is ready to help.

The basic “personal” plan allows up to five simultaneous connections. Apps are available for Windows, MacOS, iOS, and Android.

Technically, proxies are prohibited according to Netflix’s terms of use. That being said, the company has set no precedent of penalizing users who watch or attempt to watch through VPNs. While most VPN servers are blocked, Netflix seems to turn the other cheek when users try to watch while connected.