Best VPNs for Verizon and Verizon Fios : Protect your privacy and stop throttling

Want to prevent Verizon from throttling your internet connection or tracking what you do online? A VPN can help. In this article, we'll discuss the best VPNs for the purpose and show you how to use them.
Osman Husain Tech journalist, VPN and streaming expert 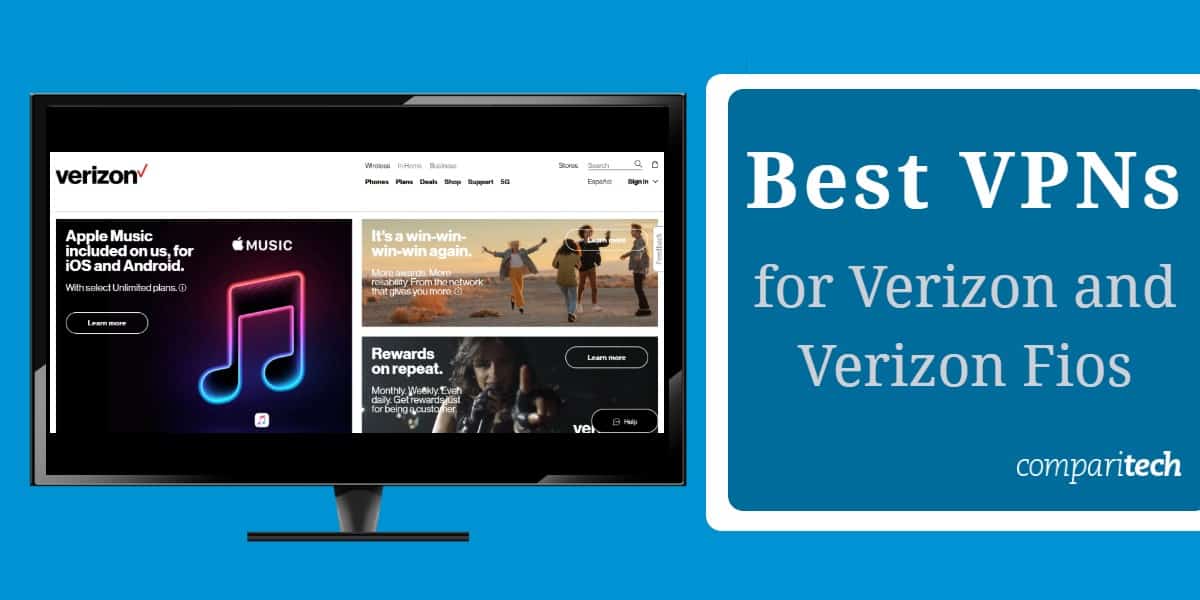 American users might be aware that broadband providers such as Verizon are now legally allowed to track your online behavior and sell the data to third-party advertisers. By extension, they can throttle your speeds to various sites as they see fit. However, if you connect to a VPN first, you can stop Verizon throttling your speed. That’s because a VPN encrypts all the traffic flowing to and from your device and routes it via an intermediary server. It’s almost impossible for anyone (including your internet service provider) to track what you’re up to on the web.

Verizon has refused to publicly confirm whether it throttles access to Netflix but there are plenty of red flags to suggest that it does. As such, this article will focus on how you can take back control of your data plan and browse sites at your leisure, without any decreases in speed.

An additional benefit of using of a VPN is that your internet activity is encrypted and hidden from Verizon.

How to stop Verizon throttling your bandwidth

If you want to keep your online activity private from Verizon to protect your streaming speeds, follow the steps below.

Here’s how to stop Verizon throttling your bandwidth:

We’ll cover a detailed explanation of the best Verizon VPNs below, but here’s a snapshot if you want to skip straight to our recommended VPNs for Verizon:

Not all VPNs are made equal. Our list of the best VPNs for Verizon is put together after analyzing the following criteria:

Here is our list of the best VPNs for Verizon Fios:

ExpressVPN is an excellent choice as your primary Verizon VPN. It’s one of the hardiest VPN services — delivering unprecedented speed, security, and ease of use. With over 3,000 servers in 94 countries, you can get an IP address from a huge selection of locations.

ExpressVPN is registered in the British Virgin Islands and isn’t required to keep any user data on file. It refrains from doing so anyway, with no personally identifiable information ever stored on its servers. Its speeds are usually very fast and the service carries a near-perfect uptime record.

BEST VPN FOR VERIZON:ExpressVPN is our top-rated VPN provider. If offers the full package, including speed, security, and assistive customer support, making it the best Verizon VPN. Users won’t be disappointed. Try it risk-free with the 30-day money-back guarantee.

NordVPN has over 5,600 servers in 60 countries, which means you have a wealth of options to port your location and prevent throttling by Verizon. It’s based in Panama, so it’s not required by law to store any user data. Plus, it abides by a policy of not logging any personally identifiable information so you’re covered from a privacy perspective.

NordVPN easily circumvents geo-restrictions put in place by the likes of Netflix, Hulu, Amazon Prime Video, and more. You’re allowed to view current server loads and select the one that’s better suited to your needs. Plus, this provider offers servers for specific tasks such as double encryption, streaming, and enhanced privacy.

All web traffic is secured by 256-bit AES encryption along with additional security measures such as an internet kill switch. DNS leak protection ensures traffic is always routed via the encrypted tunnel. Torrenting is allowed, and some servers are set up specifically to assist in P2P filesharing.

You can download and use NordVPN on Windows, MacOS, iOS, and Android. One account allows six devices to connect at the same time.

BEST BUDGET OPTION:NordVPN won’t break the bank. Plus, it works reliably with Verizon and unlocks lots of streaming sites. Try it with a 30-day money-back guarantee.

This provider offers very fast speeds, some of the fastest we’ve tested in fact. It’s proven to be able to unblock many streaming services including Netflix. What’s more, it allows users to select a Netflix-optimized server directly from the app itself rather than having to figure out which one to connect to. P2P filesharing is permitted, too.

CyberGhost includes apps for Windows, MacOS, iOS, and Android. One account allows for seven devices to connect at the same time, more than the industry average of five.

EASY TO USE:CyberGhost ships with a user-friendly interface and doesn’t compromise on any features. All plans ship with a 45-day money-back guarantee.

IPVanish is headquartered in the US, but that shouldn’t be a cause for concern. It’s another no-logs provider, meaning there’s no data retention of any kind including IP addresses or other information that could identify you.

In total, IPVanish offers over 1,300 servers in 75 locations around the world. The US, unsurprisingly, makes up the bulk of servers but there are options in most major countries.

IPVanish is capable of unblocking some streaming providers, including Netflix. However, streaming isn’t its forte. It remains a favorite with both torrenters and Kodi users and it delivers the impeccable privacy standards required to engage these two practices safely.

This provider uses 256-bit AES encryption in conjunction with 2048-bit DHE-RSA keys to guard all user traffic. Additional measures include an internet kill switch, DNS leak protection, and perfect forward secrecy. The app allows you to flip your IP address at predetermined intervals.

You can use IPVanish on Windows, MacOS, iOS, and Android. One account allows for 10 devices to connect concurrently.

SECURE AND PRIVATE:IPVanish won’t reveal your actual location or other personal details under any circumstances. Plus, it owns its network of fast servers. Plans come with a 7-day money-back guarantee.

Surfshark operates over 800 servers in approximately 50 countries. It’s fairly new to the VPN world, but it has quickly carved out a niche for itself. Unblocking abilities are among the best in the business — Surfshark can evade VPN filters used by Netflix, Hulu, BBC iPlayer, and more.

Its most compelling feature is that there’s an unlimited device policy in place, meaning no upper caps on the number of VPN connections with one account. That’s a great choice if you’re looking to share the plan with friends and family.

Surfshark doesn’t compromise on user security or privacy. Its encryption standards are among the best in the business and other features such as anti-malware defense and an ad-blocker keep you further secure.

You can use Surfshark on Windows, MacOS, iOS, and Android.

NO LIMITS:Surfshark’s unlimited connections feature means the sky’s the limit. Fast speeds and excellent unblocking abilities make this a valuable choice for Verizon. Plus, you can try it with a 45-day money-back guarantee.

PrivateVPN is based in Sweden and operates over 150 servers in 60 countries. While the network is smaller than those of other providers on this list, PrivateVPN delivers in other areas. It’s able to skirt VPN restrictions imposed by a plethora of streaming sites including Netflix, Hulu, BBC iPlayer, and more.

PrivateVPN doesn’t store any user traffic logs and has impeccable encryption standards. A kill switch will freeze traffic if the connection drops unexpectedly, and other measures such as DNS leak protection ensure there’s no possibility of data escaping the encrypted tunnel.

Apps are available for Windows, MacOS, iOS, and Android. One account allows six devices to connect at the same time.

STREAMING AND UNBLOCKING VPN:PrivateVPN delivers speed, security, and stability at an affordable price. Unlock your favorite streaming sites and keep yourself protected from bandwidth throttling. All plans come with a 30-day money-back guarantee.

Should I use a free VPN for Verizon?

Straight off the bat, we think free VPNs are a bad idea for Verizon. Such services aren’t primed for smooth user experience and offer only a fraction of the same features that paid providers do. When you use a free VPN, it’s highly likely you’ll be subjected to data caps, bandwidth restrictions, and lots of invasive advertising. What’s more, free VPNs don’t have the sophisticated filters and cloaking technology to evade geo-restriction measures put in place by the likes of Netflix and Hulu.

Many free VPN services make it a point to track user data and sell this information to third-party advertisers. Others have willingly injected malware in an attempt to make cash off you in the future. They’re going to make your internet experience far worse so it’s better if you try to steer clear.

A VPN won’t hide your data usage from Verizon

If you connect to a VPN, your ISP won’t be able to recognize the sites and apps you visit, but it can still track the amount of data you use. Throttling bandwidth refers to Verizon’s practice of slowing down specific behaviors on the internet such as streaming Netflix or torrenting. This is assuming you’re within your data cap. Verizon Fios doesn’t have data caps, but some of its other home internet services do. A VPN is a great option to prevent bandwidth throttling as your ISP can’t figure out how you’re using the internet, but it can’t prevent you from meeting (or exceeding) your data cap.

Verizon’s obsession with profits means even essential services such as firefighting aren’t immune to throttling. In 2018, the Santa Clara fire department claimed that emergency services were affected after Verizon throttled its account and refused to restore full access until the department switched their plan to one with a higher monthly fee.

According to a brief filed with the District of Columbia, Anthony Bowden, the Santa Clara County Fire Chief, said that personnel were forced to use other agencies’ ISPs as well as their own personal devices to provide the necessary connectivity and data transfer capability. This was while they were battling a massive blaze in Mendocino Complex.

A VPN can stop Verizon spying on you

Ever since the repeal of net neutrality laws, ISPs like Verizon are allowed to track and sell your personal information, including browsing data, to third parties. This means your ISP can theoretically track which websites you like to frequent, what products you buy, the content of your social media posts, and your search queries, and sell the information to advertisers.

If you’re not happy about that, then a VPN will stop your ISP from any attempts to do so. That’s because all your traffic is encrypted as it passes through the VPN server, meaning Verizon cannot track your digital footprint.