Want to go head-to-head with less skilled players in Modern Warfare 2? You'll need a VPN to do so. Check out the best VPNs for CoD MW2 in 2022 in this helpful guide.
Craig McCart 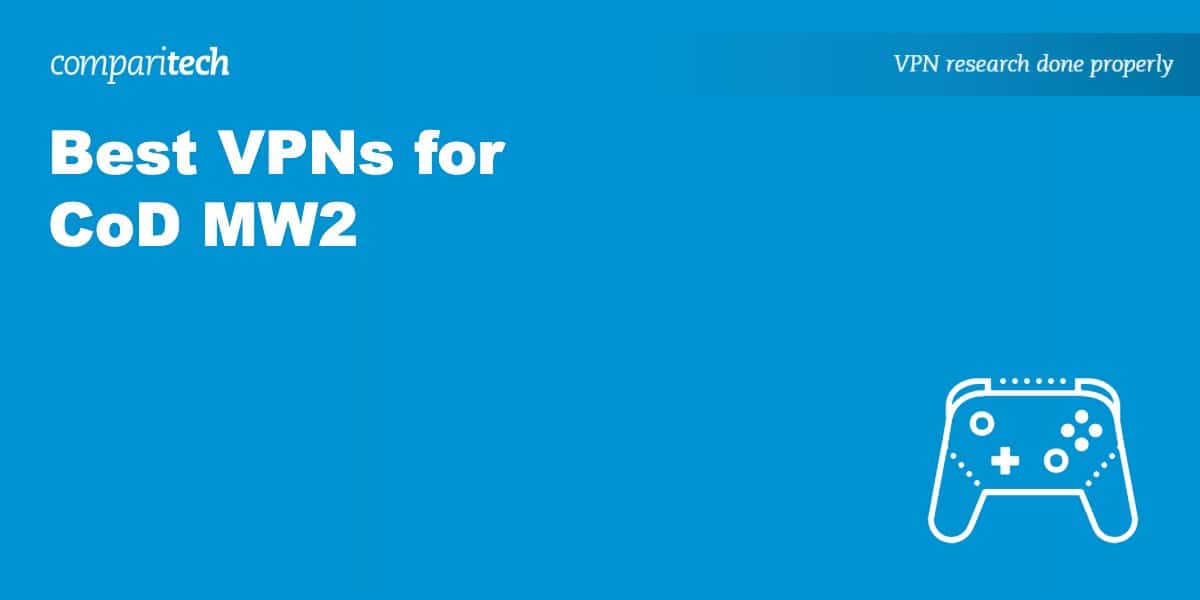 Competition in Call of Duty: Modern Warfare 2 is fierce, whether you’re a new player or a seasoned pro. The SBMM (Skill-Based Matchmaking) system puts players up against others with similar abilities for a higher quality match, which is perfect for noobs but a nightmare for top-tier players. Fortunately, you can use a VPN to join servers in different time zones for a quieter time of day, giving you a better chance of finding a more laid-back lobby.

A Virtual Private Network (VPN) encrypts your data and protects your privacy by hiding your IP address. This enables you to join servers in other countries and appear to have a local IP address. A VPN also reduces throttling by your ISP, giving you a better connection and reducing lag.

This guide will show you how to get the best VPN for CoD MW2 and which server locations to connect to for the most balanced gameplay. Not got time to read the whole thing? Here’s a quick list of the best VPNs for MW2:

NordVPN is offering a fully-featured risk-free 30-day trial if you sign up at this page. You can use the VPN rated #1 for Call of Duty MW2 with no restrictions for a month.

VPN blocking techniques are becoming more sophisticated in preventing VPNs for MW2 from accessing game lobbies, so to ensure the VPNs on our list work, we take several factors into consideration before we recommend them:

Here’s our list of the best VPNs for MW2:

NordVPN is our favorite VPN for Call of Duty. It’s a great all-rounder that’s capable of accessing Modern Warfare 2 from 59 countries, with a network of 5000+ servers. It’s also great for unblocking a variety of streaming services, and it has robust anti-spy and anti-malware protection. NordVPN also boasts double VPN servers, which encrypt your traffic twice for extra security.

NordVPN has native apps for all popular platforms, including Windows, Mac, Android, iOS, and Linux. You can also install it on a router to protect all your devices at once. NordVPN’s apps are very user-friendly and include a kill switch, DNS leak protection, and Obfuscated servers. Speeds are fast enough to enjoy lag-free matches, giving you a competitive edge over opponents.

You can use the service on up to 6 devices with no restrictions for a month, which is great if you want to try it out on all your devices or use it abroad. If you’re not happy with the service, just contact support within 30 days, and you’ll get a full refund. There’s also a 24/7 live chat available if you need help.

TOP VPN FOR MW2:NordVPN has a solid set of security credentials, low-latency servers, and a 30-day money-back guarantee.

Surfshark is a great CoD VPN for players on a budget. It doesn’t impose a connection limit like most other providers, so you can protect all your devices with one account. Surfshark’s apps come with a number of features, including DNS leak protection, a kill switch, and a Whitelister that allows you to exclude certain apps from the VPN.

Servers are located in 99 countries, which gives you plenty of choices for finding a low-latency connection. And, with over 3200 servers, there’s always one nearby, no matter where you are. Surfshark also uses strong encryption and offers a strict no-logs policy.

Although Surfshark doesn’t have dedicated CoD servers, it’s still one of the fastest gaming VPNs around. You can test it out for yourself with a 30-day money-back guarantee.

ExpressVPN is one of the fastest VPNs capable of unblocking a variety of streaming services, as well as Modern Warfare 2. It has over 3000 servers in 94 countries, so you’re sure to find one with low latency. ExpressVPN also uses strong security protocols and keeps no logs of user activity, ensuring your privacy is protected.

The provider’s apps offer some useful privacy tools like DNS and IPv6 leak protection, a kill switch, and split tunneling. You can also use the MediaStreamer feature to improve streaming speeds. While ExpressVPN doesn’t offer dedicated apps for consoles, you can install the service on select routers, allowing you to share your VPN connection with all the devices that connect to it.

Plans include 24/7 support, a 5 simultaneous device limit, and a 30-day money-back guarantee.

CyberGhost is another excellent all-rounder that’s great for gaming. It has a network of over 6000 servers in 88 countries, so you’re sure to find one with a low ping time. CyberGhost You can use the service on up to 7 devices at once, which is enough for most gamers, and although there’s no PS4 or Xbox native app, CyberGhost supports SmartDNS, which can improve streaming speeds on consoles. To play MW2 with a VPN, CyberGhost offers detailed setup steps for router installation.

CyberGhost’s apps come with all the features you need for a safe and private gaming experience, including a kill switch, DNS leak protection, and an automatic wifi protection feature. You can choose from a range of pre-configured servers optimized for different activities like streaming or gaming.

If you’re not happy with the service, you can get a refund within 45 days. And there’s 24/7 live chat support if you need any help.

DEDICATED GAMING SERVERS:CyberGhost has servers in 88 countries, apps include a kill switch, and it doesn’t collect logs.

PrivateVPN is a small but mighty provider that’s great for gaming. It has a network of 200+ servers in 63 countries, which is fewer than some of the other providers on our list. However, its servers are carefully chosen to provide low-latency connections.

PrivateVPN apps are super easy to use and offer a kill switch and DNS leak protection. You can use the service on up to 10 devices at once. PrivateVPN doesn’t support router installations but allows you to set up the app on Windows or macOS as a personal VPN hotspot.

There’s also 24/7 live chat support available. And, if you’re not happy with the service, you can get a refund within 30 days.

IPVanish is a great choice for MW2 players thanks to its low-latency servers and robust security features. It has a network of 2000+ servers in 75+ countries, so you’re sure to find a fast connection regardless of where you connect from.

IPVanish includes an unlimited device connection limit, allowing you to share the cost of a plan with friends and family. Apps for Windows, macOS, iOS, Android, and Fire TV are available. You can also install the service on routers.

IPVanish uses strong security protocols and offers a strict no-logs policy. The provider’s apps include a kill switch and DNS leak protection. You can also use the IPVanish SOCKS5 proxy to improve streaming speeds on MW2.

ROBUST SECURITY:IPVanish has servers in 75+ countries, offers a SOCKS5 proxy, and unlimited connections.

AtlasVPN is a newer provider with a growing list of server locations, currently covering 40+ countries. While its network only has 750+ servers, don’t let that fool you. It comes with WireGuard support for the fastest possible speeds and includes unlimited device connections.

AtlasVPN is a reliable gaming VPN and has apps for all major platforms but doesn’t offer dedicated apps for consoles or routers. Instead, you can install the app on a Windows device and set it up as a mobile hotspot. In doing so, you can enjoy Modern Warfare 2 on your gaming devices without having to install any additional software.

Split tunneling, multi-hop servers, and a kill switch are included as standard, as is live chat support.

Read our full review of AtlasVPN.

How to use a Call of Duty MW2 VPN

Getting started with a VPN for CoD is pretty straightforward, and you’ll be taking out noobs with your favorite rifle in no time.

Here’s how to use a Call of Duty MW2 VPN:

Both PC and console players can also opt for the Vault edition of the game, costing $99 with a wealth of extra bonus content. On top of the base game, you’ll also get:

More than a decade after the original release of Modern Warfare 2 in 2009, Infinity Ward is back with a game remake that’s sure to please both newcomers and fans of the original.

The most significant change to Modern Warfare 2 is the improved graphics that take full advantage of the current hardware available. You’ll also find a new leveling system, an overhauled weapon inventory, and some tweaks to the campaign mode. There’s also a new co-op multiplayer mode called ‘Spec Ops,’ where you can team up with a friend to complete missions.

On the multiplayer side, Modern Warfare 2 comes with 15 maps, including classic ones from the original game. Infinity Ward has also confirmed a total of 51 base weapons available at launch and some of the most popular weapons from previous games. There are more than ten game modes, although the popular Gunfight mode isn’t included at launch.

Are there any downsides to using a MW2 VPN?

Using a VPN for MW2 is as safe and secure as using one for any other online activity. However, there are some potential downsides to consider before investing in a subscription:

Ultimately, using a VPN for MW2 is an easy and effective way to stay safe and secure while gaming. However, it’s important to do some research before investing in a subscription, as not all providers are created equal.

Choosing the best VPN for Call of Duty: Our testing methodology

As a gamer, finding a VPN that helps you rank up in Modern Warfare 2 is more complex than you might think. We aim to relieve some of the efforts with our testing criteria. We look at the following points before even thinking about adding a VPN to our list:

When we put together our list of the best VPNs for Modern Warfare 2, we keep the above factors and our testing process in mind. This way, we can be confident that the service will enhance your gameplay rather than hinder it.

Is it legal to use a VPN with Modern Warfare 2?

Yes, it is legal to use a VPN with Modern Warfare 2. However, we recommend you check with the game's developer, Activision, to see if any restrictions exist.

Can I get banned for using a VPN with Modern Warfare 2?

There's always a risk of being banned when using a VPN with any online game. However, as long as you're not using the VPN to cheat, the chances of being banned are slim.

Can I use a free VPN with Modern Warfare 2?

You may find free VPNs that claim to work with Modern Warfare 2, but we recommend against using a free service. Free providers can't be trusted with your data, and their networks are often slow and overcrowded.