A complete guide to VPN tunneling

VPN tunneling allows data to be transmitted privately and securely over the internet. We reveal how VPN tunneling really works plus the most secure tunneling VPNs on the market.
Paul Bischoff TECH WRITER, PRIVACY ADVOCATE AND VPN EXPERT 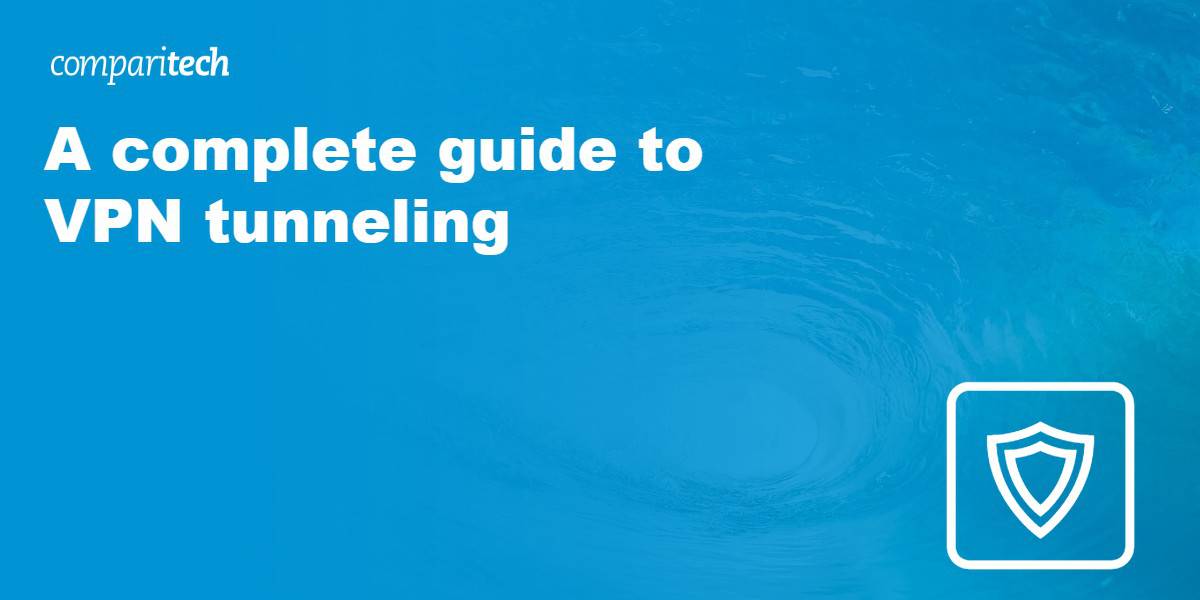 A VPN, or Virtual Private Network, encrypts all of the data sent to and from your device and routes it through an intermediary server that stands between you and the internet. The encrypted connection between your device and the VPN server is often referred to as a “tunnel”. No third-parties, such as your ISP, government, or local IT administrator, can see the contents of your data or its destination while the VPN is active.

We’ll discuss how VPN tunneling works in this article, including encryption, protocols, and why tunneling is necessary for security and privacy.

What is VPN tunneling? 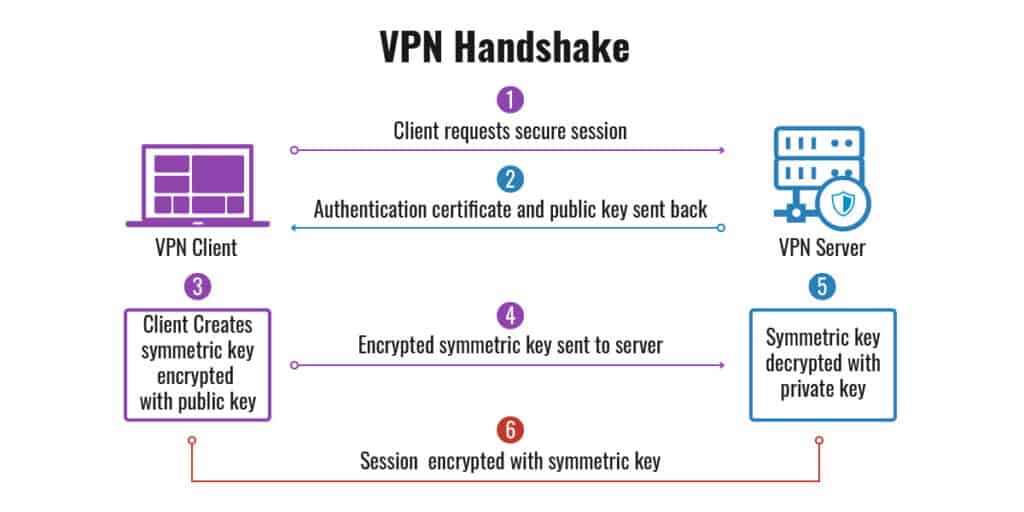 Once the connection is established, your device and the server can securely transmit data back and forth through the “tunnel”. Data is encrypted with the key before it ever leaves your device. When it reaches the VPN server, it is decrypted, then forwarded to the final destination—a website, app, streaming service, etc. 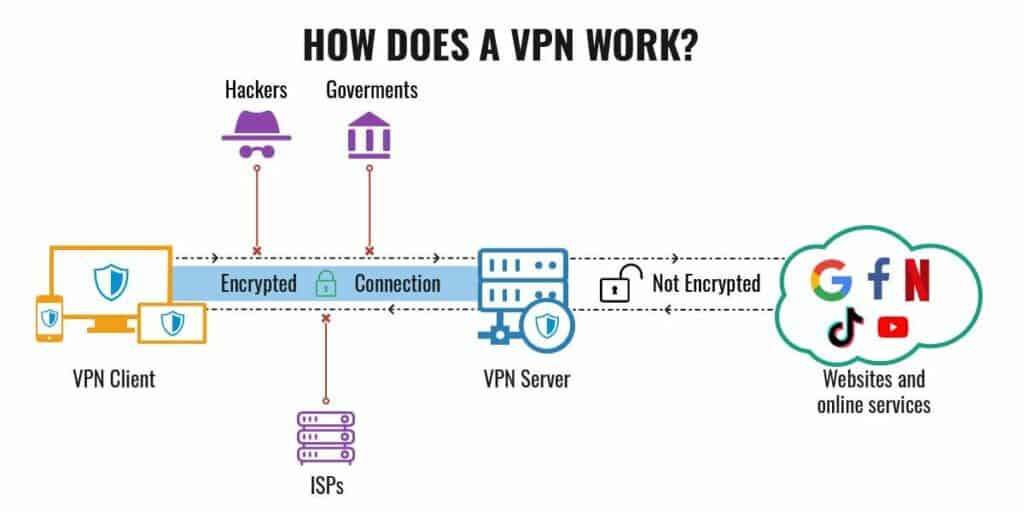 Data coming from the internet goes through the same process in reverse: data is sent from the app or website to the VPN server. The VPN server encrypts the data and sends it to your device, where it’s decrypted with the key.

The “tunnel” analogy comes from the VPN’s encryption. Data can go back and forth between the tunnel, but there are only two endpoints—your device and the VPN server—where data is encrypted and decrypted.

What to look for when choosing a VPN

How you plan on using the VPN determines which tunneling features will best serve you. VPN tunneling can be used for a number of purposes:

Split tunneling is a VPN feature that allows you to choose which data goes through the encrypted VPN tunnel and which uses a direct, unencrypted connection.

Split tunneling is useful in situations where only certain activities need to be protected by the VPN. While torrenting, for example, you can set your torrenting app to use the VPN while your web browser uses a normal internet connection.

What are VPN tunneling protocols

A VPN tunneling protocol sets the rules for how your device and the VPN server communicate. Not all protocols are equal, and they each have their advantages and disadvantages. You can often choose between protocols in your VPN app settings.

Here are some of the most common VPN tunneling protocols in use today:

Many VPN apps have multiple protocols available to choose from. Some even have their own proprietary protocols, often based on those above. NordVPN’s NordLynx, ExpressVPN’s Lightway, VyprVPN’s Chameleon, and Hotspot Shield’s Hydra Catapult are all examples of proprietary VPN protocols.

Best VPNs that use tunneling

Some VPNs have faster or more secure tunnels than others. Comparitech tests and reviews dozens of VPNs to find out which ones will best protect your data while delivering high speeds and access to region-locked content around the world.

Here are our top picks for VPNs with the most secure tunneling:

NordVPN operates a huge network of servers around the world and is the fastest VPN we’ve tested. It works in China, unblocks Netflix and many other streaming services, and uses leak-proof encryption. You can connect up to six devices at once, with apps available for Windows, MacOS, iOS, and Android, Fire TV, and Linux. Live chat support is available 24/7 on the website.

Supported tunneling protocols include NordLynx (Wireguard), OpenVPN, and IKEv2. Split tunneling is not supported, but an app-specific kill switch will cut selected programs off from the internet if the VPN connection drops for any reason.

BEST FOR TUNNELING:NordVPN is the fastest VPN around and boasts excellent security. Try it risk-free with a 30-day money-back guarantee.

Surfshark is a budget-friendly provider that doesn’t skimp on speed or privacy. It’s great for unblocking region-locked content like Netflix, Amazon Prime, BBC iPlayer, and Hulu. You can connect an unlimited number of devices at once, which makes this a great deal for a family or group of housemates.

BUDGET CHOICE:Surfshark is a great unblocker with unlimited connections on a single plan. Try it out with a 30-day money-back guarantee.

ExpressVPN is a premium service with rock-solid apps and fast performance. It’s great for unblocking region-locked streaming services like Netflix, BBC iPlayer, Hulu, and Prime Video. The apps for Windows, MacOS, iOS, Android, Fire TV, Linux, and certain wi-fi routers are all leak proof and use the strongest available encryption. When it comes to security, ExpressVPN is at the front of the pack.

Supported protocols include Lightway (ExpressVPN’s proprietary protocol), OpenVPN, L2TP, and IKEv2. Split tunneling allows you to choose which apps use the VPN and which use a direct, unencrypted connection.

ExpressVPN reliably bypasses China’s Great Firewall. You can connect up to five devices at a time. Live chat support is available 24/7.

SECURE TUNNEL:ExpressVPN is a privacy-first VPN It works with a wide range of devices and offers an all-around excellent service. Comes with a 30-day money-back guarantee.

CyberGhost is an easy-to-use VPN that makes unblocking streaming services and securing your web browsing simple. Users can choose the streaming service they want to unblock right from the app instead of guessing at which server to use. CyberGhost uses strong encryption and keeps no logs of its users activity or other identifying information.

CyberGhost supports the Wireguard, OpenVPN, IKEv2, L2TP, and PPTP protocols. You can connect up to seven devices at once on Windows, MacOS, iOS, Android, Fire TV, and Linux.

IPVanish has long been a favorite among torrenters and Kodi users. It unblocks Netflix and a few other streaming services, but it’s not a region-unblocking powerhouse like others on this list. Instead, IPVanish is all about security. You can even change your IP address at set intervals and enable obfuscation to avoid detection.

Like Surfshark, IPVanish lets you connect as many devices as you want on a single plan. Apps are available for Windows, MacOS, iOS, Android, and Fire TV.

SECURE TUNNEl:IPVanish is a solid VPN if you want to maximize privacy and security on all the devices in your house. It’s backed by a 30-day money-back guarantee.