In this article, we'll show you how to stream your favorite shows, sporting events and log in to online banking services abroad. You can do all this by obtaining a Cambodia IP address using a Virtual Private Network (VPN). Read on for our step-by-step guide to setting up a VPN that has servers in Cambodia.
Osman Husain Tech journalist, VPN and streaming expert 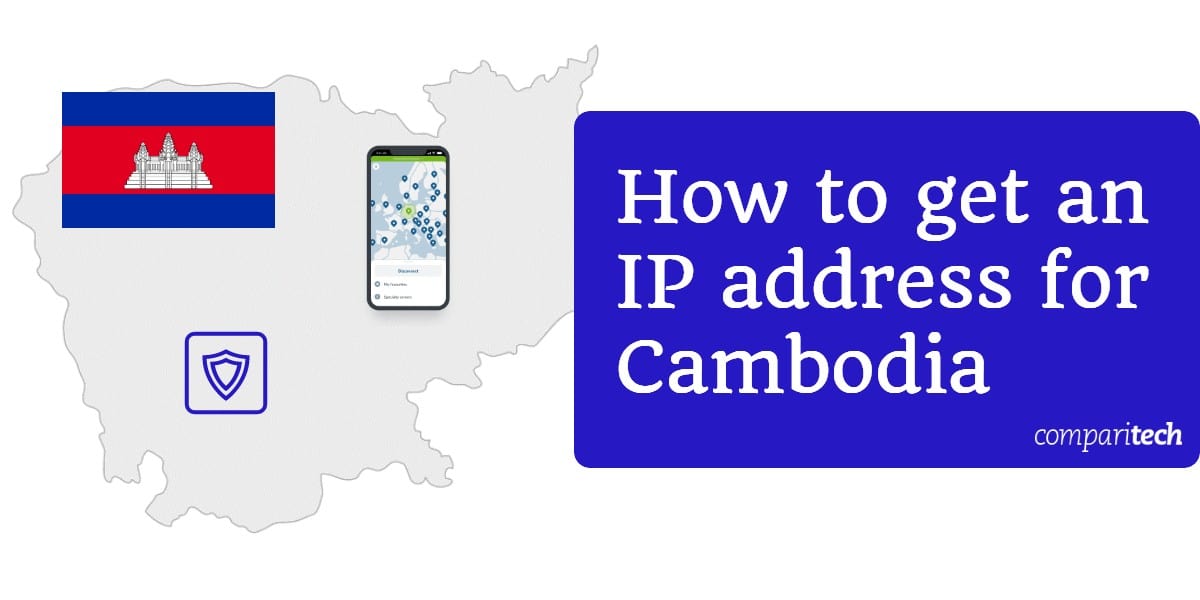 Cambodian streaming sites, such as Phnom Penh Television, Bayon TV, Apsara Television, and National Television of Kampuchea, often restrict access to their live streams based on whether you’re in the country or not. This means you may not be able to watch if you don’t log in with a Cambodia IP address. You might also face issues trying to log in to your online banking accounts from places like ACLEDA Bank, Canadia Bank, Union Commercial Bank, ANZ Royal, among others

A Virtual Private Network (VPN) will assist in all the aforementioned issues. It works by encrypting all the traffic flowing to and from your device and routing it via an intermediary server. When you select a server in Cambodia, your real IP address will be replaced with a Cambodian one, so you’ll be able to access the above services.

The encryption aspect of VPNs means your traffic will be unreadable to any snoopers, including hackers or your Internet Service Provider (ISP). Read on to find out how to obtain an IP address from Cambodia and the best VPNs for the job.

How to get a Cambodia IP address

VPNs are remarkably easy to set up. Even if you’ve never used one before you can get one up and running really quickly, so you can start streaming your favorite Cambodian content wherever you are.

Here’s how to get a Cambodia IP address in 5 easy steps :

TIP: HOW TO GET A PAID VPN FOR FREE: The best VPN deals often entail commitments of up to a year or more. We understand that not everyone’s in the market for such a long-term deal. If you only need a VPN for a month or less, you can take advantage of ExpressVPN’s 30-day money-back guarantee. You’ll be able to request a refund at any point during those 30 days and a ‘no-questions-asked’ policy means there’s no need to explain your case to a customer support representative. It’s a risk-free deal.

If you’re running short of time, here’s a summary of the best VPNs to get a  Cambodia IP address:

There are many choices when it comes to VPNs. However, not all VPNs offer the same features or even the same quality of service.

We’ve therefore taken the time to research the best VPNs for a Cambodian IP address. In order to qualify, VPNs had to meet the following criteria:

The best VPNs for a Cambodia IP address

Here is our full rundown of the best VPNs you can use to get an IP address in Cambodia.

ExpressVPN is our top pick to obtain an IP address from Cambodia. This is because of its commitment to speed, stability, reliability, customer service, and user experience. It offers more than 3,000 servers in 94 countries, including Cambodia.

ExpressVPN is able to thwart geo-restrictions on Netflix US, Hulu, BBC iPlayer, Fox, Sky, Acorn TV, and more, so accessing Phnom Penh Television, Bayon TV, Apsara Television, and National Television of Kampuchea should be a walk in the park. This provider can help you stream HD and 4K video without any noticeable buffering.

ExpressVPN deploys 256-bit encryption which is also referred to as ‘military-grade’ and is the gold-standard of protocols. Further privacy measures include an internet kill switch, perfect forward secrecy, and DNS leak protection. There’s an internal policy of not storing any personally identifiable information.

One account allows for five devices to connect at the same time. Customer support via live chat is available 24/7. You can pay via Bitcoin if for an extra layer of anonymity.

BEST VPN FOR CAMBODIA:ExpressVPN is our top pick due to its reliability, speed, and little to no downtime. Try it risk-free with the 30-day no-questions-asked money-back guarantee.

PureVPN has more than 1,750 servers across the globe, including options in Phnom Penh, Cambodia’s capital. This Hong Kong-headquartered provider offers you the ability to unblock several geo-restricted services like Netflix, Hulu, and Amazon Prime Video.

The company did receive some bad press in the past, alleging that it failed to disclose the fact that it logs user data. However, that matter has been addressed in PureVPN’s rebranding efforts. You’ll now find a clear privacy policy which states that it doesn’t store any user data.

Apps for Windows, MacOS, Android, and iOS are available. One account allows for five devices to connect concurrently, while customer support is available around the clock.

BUDGET OPTION:PureVPN offers a reliable VPN product at a price you can afford. Take advantage of its 31-day money-back guarantee.

HideMyAss is headquartered in the United Kingdom and is considered to be a veteran in the VPN industry. It operates over 900 servers covering more than 190 countries. Note that some servers are ‘virtual’ — the server is located in one country but gives you an IP address from a different country. There are two virtual servers offering Cambodian IP addresses.

HideMyAss users have the option of selecting servers dedicated to streaming, torrenting, and other activities. It has millions of users around the world so it’s clearly a service people enjoy using.

The service is fast, stable and incorporates unblocking capabilities to overcome restrictions imposed by Netflix, Hulu, and BBC iPlayer.

HideMyAss uses 256-bit AES encryption to protect web traffic, along with 4,096-bit RSA keys, perfect forward secrecy, and automatic wifi protection. Desktop apps have an additional option for an internet kill switch. Unfortunately, this provider does log user data including personally identifiable information such as IP addresses. Having said that, it’s possible to turn this setting off within the app.

You can find apps for Windows, MacOS, Android, and iOS. A single connection allows for five devices to connect concurrently.

USER-FRIENDLY:HideMyAss works with many streaming services, and has fast speeds and solid encryption parameters. All plans come with a 30-day money-back guarantee.

Can I use a free VPN to obtain a Cambodia IP address?

We’ve tested dozens of VPN services, and in our collective experience, we’ve come to realize one universal truth: free VPNs just aren’t worth it.

Yes, they’re heavily advertised across the internet and are tempting to sign up for. We understand they’re free and there’s no upfront cash payment involved. However, the experience that such providers offer is generally very poor.

If you’re trying to stream content or securely access banking services, it’s difficult to do that with a free VPN because of bandwidth throttling, small data caps, and the choice of a small number of servers.

In some cases, free VPN providers have been caught mining user data in order to sell it for cash. Others have utilized idle bandwidth to build botnet armies and attack rival sites. Some free VPN apps even come bundled with malware that can lead to data loss or extortion.

Overall, it’s in your best interests to avoid free VPNs. A short-term solution is the one suggested at the beginning of this article (taking advantage of ExpressVPN’s money-back guarantee). Otherwise, it’s best to spend a few dollars each month — it’ll be worth it.

Can I use a VPN to watch Cambodian television online?

Having said that, it’s possible that some of these channels may ask you to sign up and obtain a username and password (including supplying a local address) before giving full access. In this case, it’s best to check with individual sites for signup rules.

What sites are blocked in Cambodia?

Internet freedoms in Cambodia leave a lot to be desired.

In May 2018, the government issued a fresh proclamation that lays the groundwork for future blocking and filtering on website and social media content. There has been a large number of criminal prosecutions for online activity as the government cracks down on voices that oppose it.

Real concerns have emerged about potential surveillance — in 2018 the government of Cambodia ordered that all domestic and international network traffic be routed via a data management center which would be run by state-owned Telecom Cambodia.

Administrations have ordered blockades on news sites such as Cambodia Daily, claiming that it violates national sovereignty.

For all intents and purposes, if you’re in Cambodia, it’s probably in your best interests to navigate the web safely and securely with a VPN. This way, you can still access local sites with a Cambodian IP address, but your traffic will be encrypted and hidden from prying eyes.

What else can I do with an IP address from Cambodia?

Another reason VPNs are surging in popularity is because of their ability to securely access online banking. A Cambodia IP address will make it easier to check your online bank account from ACLEDA Bank, Canadia Bank, Union Commercial Bank, ANZ Royal, and more. The fact that you log in with a local IP address means your activity won’t raise any compliance red flags or intrusion alerts.

As we mentioned earlier, the encryption features included in your VPN connection makes the internet connection virtually unhackable. Hence, it’s a hassle-free experience to access public wifi. Public wifi networks are those unsecured networks you typically find at airports, hotels, malls, and cafes — sometimes they’re infiltrated by hackers who try to pilfer your data through things like man-in-the-middle attacks.

What other methods can I use to obtain an IP address from Cambodia?

VPNs are the fastest and most efficient method to obfuscate your location, but they’re not the only one. Another way is to use the Tor browser to hide your actual IP address.

The Tor project was originally developed to deter mass surveillance attempts by dictatorships and totalitarian states. Its flagship service, the Tor browser, is free to download and popular with whistleblowers, human rights activists, and journalists. However, it’s very slow so you can’t really use it for data-intensive tasks like streaming or downloading.

The Tor browser is also gaining a shady reputation for being used by criminals to access the dark web, so you might want to stay clear for that reason.

Lastly, you also have the option of leveraging free proxy servers. However, these suffer from weak encryption standards and unclear privacy policies. At the same time, major streaming providers have upped their game to block proxy servers. So proxies probably won’t work if you’re going to use them to stream HD content.