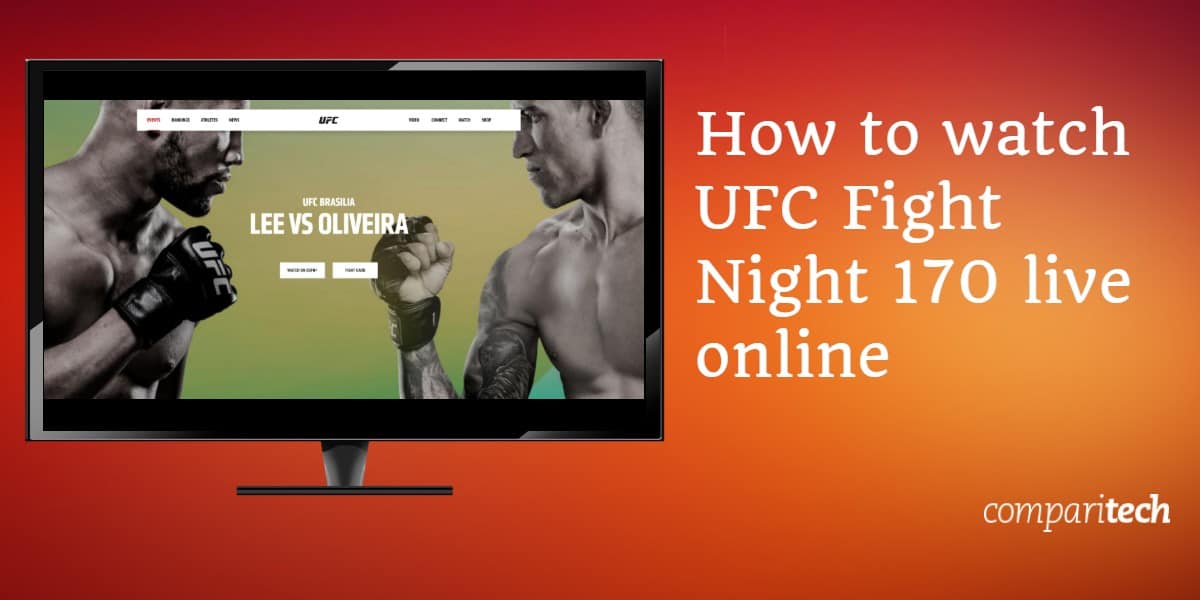 UFC Fight Night 170 will take place on March 14 at the Ginásio Nilson Nelson in Brasília, Brazil. While the preliminary fights begin at 5 PM EST (1 PM PST / 10 PM GMT), the main event, Felder vs Hooker, won’t begin until around 8 PM EST. This event promises 12 unforgettable fights and below, we’ll explain how you can stream them all online.

This post will only recommend official sources. Popular sporting events like this one are often available via third-party streaming sites, but we recommend avoiding these. In addition to having laggy, low-resolution video, unauthorized streams are prone to being taken down partway through for copyright violation. This means you might not even see which fighter wins. As you can live stream UFC Fight Night 170 easily anyway, there’s no need to resort to unlicensed streams.

If you’re traveling abroad and want to stream UFC Fight Night 170 online, you will need a VPN to access your home streaming services.

VPNs can seem a little intimidating at first, but they’re actually quite simple to use. Below, we’ll let you know how to stream UFC Fight Night 170 wherever you are.

Here’s how to live stream UFC Fight Night 170: Lee vs Oliveira from anywhere:

As this event will be broadcast live, we strongly recommend testing your VPN with the steps above well in advance of the start time. This way, if anything doesn’t work as expected, you’ll have plenty of time to contact your VPN’s customer service team for help, and might not have to miss the beginning of what’s sure to be a highly memorable fight.

Where can I watch UFC Fight Night 170?

MMA’s popularity has risen dramatically in recent years, so it’s only natural that the UFC has allowed its programming to be shown in several countries worldwide. Take a look below to find out which network is showing the entire UFC Fight Night fight card in your country:

Both the main card and the preliminary fights will air exclusively on ESPN+. Unfortunately, this service doesn’t offer any kind of free trial, so if you want to watch UFC Fight Night 170, you’ll need an ESPN+ account. These aren’t too expensive, though, at $4.99 USD per month.

ESPN+ is region-locked and can only be used if you’re in the US or connected to a US VPN server. It’s worth mentioning that this platform doesn’t check to see if your PayPal account is linked to a US address, meaning you can actually sign up from anywhere. Don’t have a VPN yet? ExpressVPN comes with a 30-day money-back guarantee, so you can try it risk-free.

BT Sport is the only broadcaster showing UFC Fight Night 170 in the UK. The coverage for the preliminary fights will begin at 10 PM GMT, with the main events starting around 1 AM. If you already subscribe to BT Sport, you’re in the clear and can simply stream the event live on the website. If not, you can sign up for the new online-only package which costs £25 per month with no trial.

BT Sport is only available in the UK. However, you can still log in from abroad by connecting to a British VPN server.

TSN will be broadcasting the entire UFC Fight Night 170 fight card in Canada. If you already receive these channels as part of your existing cable TV package, just log in to the TSN website and start streaming right away. If not, don’t panic: you can purchase a one-day online-only pass for $4.99 CAD (monthly passes are also available for $19.99).

Unfortunately, this service doesn’t include any kind of free trial, and as it’s region-locked, you’ll have to be in Canada (or connected to a Canadian VPN server) in order to use it.

If you can’t watch UFC Fight Night 170 online using any of the services above, you might be better off subscribing to UFC Fight Pass. It’s available worldwide, except for in Brazil, and while prices vary based on your location, it usually costs around $10 USD. There’s a week-long free trial too, so you can see if this service is right for you.

Like many sports streaming services, UFC Fight Pass uses blackouts to prevent you from watching fights that are being shown by another broadcaster in your country. As a result, this might not be the best way for everybody to watch. If another platform is showing UFC Fight Night 170 where you are, it’d likely be easier to sign up for that than to find a country where UFC Fight Pass isn’t blacking out this event.

UFC Fight Night 170 promises to be as exciting as ever. Take a look below for the full schedule: