How to watch Attack on Titan season 4 online from anywhere

The biggest anime of the decade is about to come to an end. We’ll get you up to speed on all of the details including what time the premiere starts, what to expect from the final series, and how to watch Attack on Titan season 4 online from anywhere.
Ian Garland Streaming, Kodi and VPN Expert 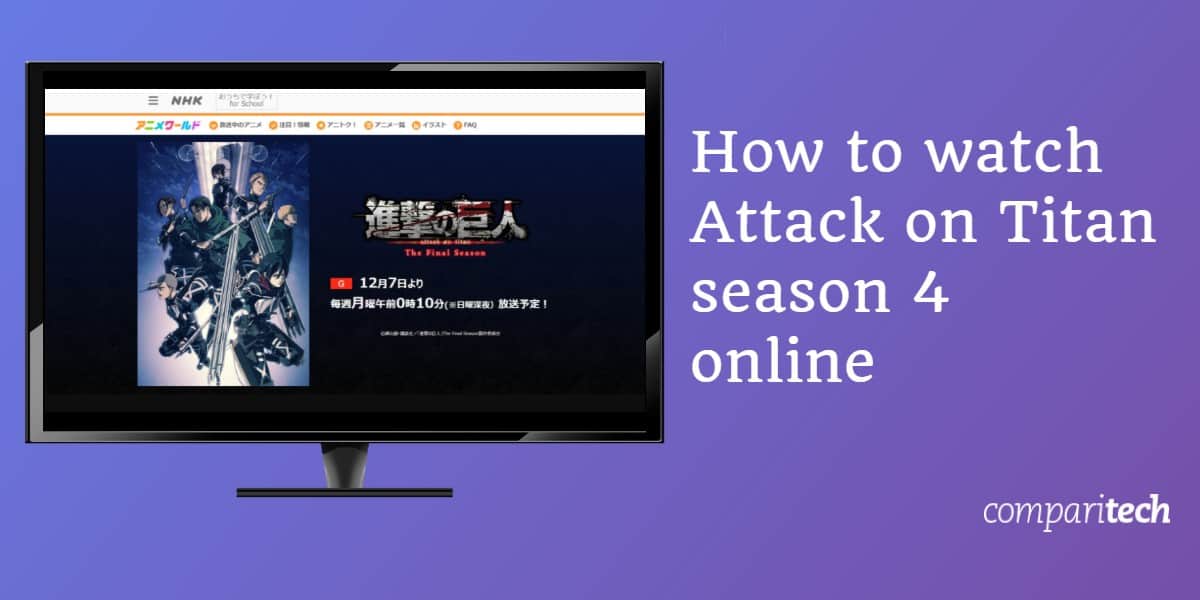 It’s been around a year and a half since the last series of Attack on Titan, and roughly seven years since the first episode, so it’s safe to say that fans have been waiting a long time to see how Attack on Titan will end. The wait is almost over, though; the fourth and final season will premiere at 12:10 AM JST (10:10 AM EST / 7:10 AM PST) on December 7. Read on to find out how you can stream this (and every other episode of Attack on Titan) online.

Despite the amount of hype surrounding this show, it won’t be available worldwide right away. As such, it’s extremely likely that we’ll see unofficial streams appear. However, we don’t recommend using these. To begin with, there are no guarantees around the quality of their video or the accuracy of their subtitles. Additionally, third-party streams can be taken down at any moment — something that’s almost certain to happen given Attack on Titan’s popularity. With plenty of legitimate ways to watch, there’s no reason to use anything other than official sources.

The final season of Attack on Titan will only be broadcast on geo-restricted streaming platforms. This means that if you’re traveling and looking to watch on your usual services, you’ll have to connect to a Virtual Private Network (VPN) first.

VPNs might seem complicated but they’re really quite simple to use. Below is our two-minute guide to unblocking and streaming Attack on Titan season 4 from anywhere (even abroad).

Here’s how to watch Attack on Titan Season 4 online:

New episodes of Attack on Titan will be broadcast live. For this reason, it’s a good idea to make sure that your VPN works as expected ahead of time. After all, you’ve waited this long, and it’d be a real shame to miss the start of the premiere because of last-minute technical trouble. If you encounter any problems, you should have plenty of time to get help from your VPN’s customer support team (many of which operate a 24/7 live chat help desk).

How to watch Attack on Titan season 4 on Japanese TV 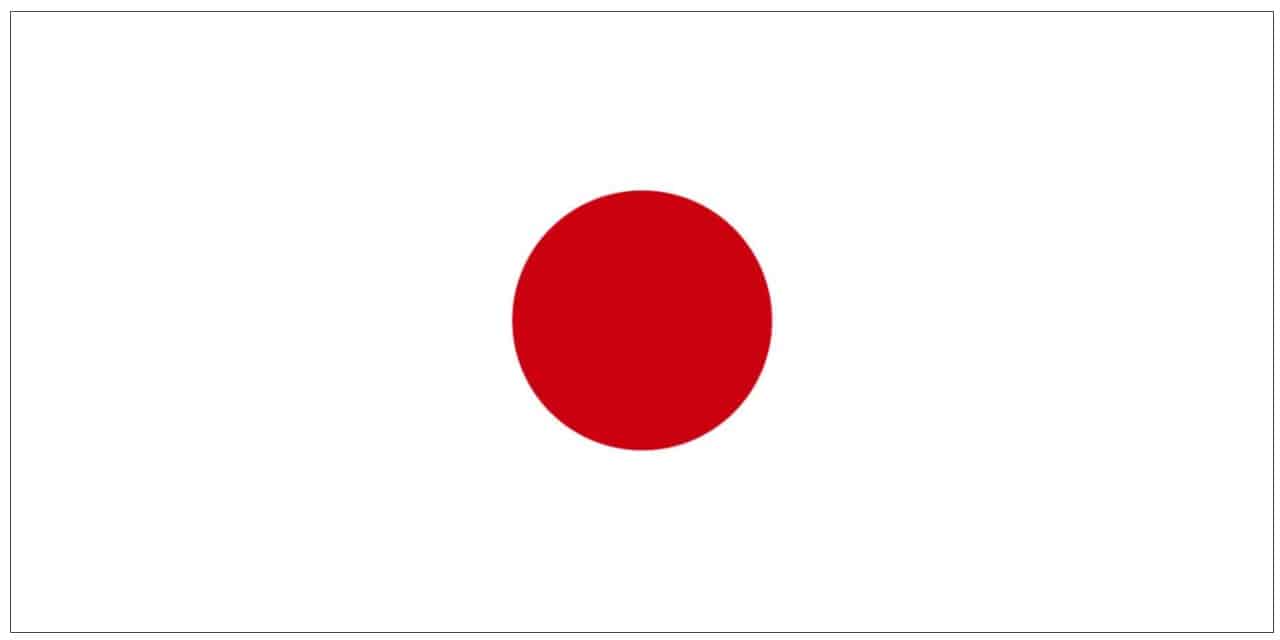 Attack on Titan season 4 will be broadcast at 12:10 AM JST every Monday on NHK-G. Users can watch live, free of charge, but you should note that both the audio and subtitles will be in Japanese. Additionally, this channel will be airing a condensed omnibus of previous seasons in the nights preceding this, so if you don’t have time to binge the whole show, you’ll still be able to get caught up.

Note that only users who have an existing NHK TV contract linked to a Japanese address will be able to watch recently-aired episodes on-demand. In other words, if you miss an episode and don’t have cable TV, you’ll have to wait until it’s made available on other streaming services. Luckily, we’re talking hours, not days: Netflix Japan will add new episodes the same day that they air, although again, you’ll only be able to watch in Japanese. On the plus side, it also offers every previous episode, so if you’re looking to start watching from the beginning, now’s your chance.

NHK and Netflix are both geo-restricted, which means you’ll need a VPN to watch Attack on Titan if you’re abroad. NordVPN comes with a 30-day money-back guarantee, allowing you to try it completely risk-free. If you’re not satisfied, just cancel during this period to receive a full refund.

Where else can I stream Attack on Titan online?

It’s rare for an anime to be this popular overseas, but Attack on Titan was one of the shows that helped bring the medium to the mainstream. The good news is that this means it’s having an extremely rapid international release. Here’s how to watch Attack on Titan wherever you are:

Funimation recently announced that it’ll be broadcasting the new season of Attack on Titan “day and date” with its Japanese release. However, while the service would usually offer English dubbed episodes within a week, the ongoing pandemic has pushed this back. Dubbed episodes are still coming, but we don’t know exactly when just yet. Funimation costs $5.99 USD or CAD per month, depending on your location and comes with a 14-day free trial.

If you’d prefer, you can also watch on Crunchyroll. However, this is the inferior choice for streaming Attack on Titan for a couple of reasons. It’s more expensive, at $7.99 (USD and CAD), and it hasn’t set a concrete broadcast date yet, instead claiming that it’ll show new episodes “later this year.”

Note that while both services offer a free tier, these require you to wait an extra week before new episodes are added. Additionally, Funimation and Crunchyroll have different libraries based on where you are in the world. As such, you may need a VPN to stream Attack on Titan on these platforms from outside the US.

If you’re in the UK and Ireland, your best option for streaming the final season of Attack on Titan is Funimation. Free plans are available, but if you want to watch new episodes the day they’re released, you’ll have to pay £4.99 or $5.99 USD (roughly €4.97) per month for a premium subscription. Each of these includes a two-week free trial.

Just like in the US, Crunchyroll will be adding Attack on Titan season 4 at some point in the future. Subscriptions cost £6.50 per month in the UK and €4.99 per month in Ireland. Whichever service you choose, you’ll be able to watch older episodes. Crunchyroll has the first three seasons with English subtitles, whereas Funimation has the same but dubbed in English.

Crunchyroll and Funimation are both region-locked. However, you can access their British and Irish libraries abroad using a VPN.

Australia’s main anime broadcaster is Animelab, and unsurprisingly, it’ll be showing new episodes the same day they air (December 7). Users can wait an extra week to watch Attack on Titan season 4 for free, or pay $7.95 AUD per month (after a 30-day free trial) to start streaming right away. This service offers all three prior seasons, plus a feature-length recap called Attack on Titan: Chronicle in case you don’t have the time (or desire) to start the series over.

Crunchyroll ($7.99 per month) will be adding episodes at an undetermined date in 2020.

Animelab is currently only available in Australia, and Crunchyroll’s library changes depending on where you are in the world. To access these services abroad, you’ll need a VPN.

When will Attack on Titan season 4 be dubbed?

Obviously, due to the ongoing pandemic, it’s difficult to maintain a weekly release schedule for dubbed episodes. We saw this earlier in the year, with delays to Funimation’s Fire Force and My Hero Academia dubs.

However, the service seems to have settled into a roughly two-week cycle. If this keeps up (and it looks likely to, given how huge Attack on Titan is with Western audiences), the earliest we can expect to see an English dub is December 21. That said, the voice actors may well be taking time off over the holiday season so really, it’s anyone’s guess.

Will Attack on Titan season 4 be released all at once?

Although there hasn’t been any official word just yet, Netflix users in Japan were allegedly sent a push notification that mentioned Attack on Titan: The Final Season Part 1. This implies that the last series will be split in half like season three was. Of course, this depends on factors such as the number of episodes in the season and crucially, whether the reported notification was genuine or not. A Spring release is probably a safe bet for the second half of the final season, especially given the change of studio and all of the pressure put on the industry by the pandemic this year.

What can we expect from the final season of Attack on Titan?

Note: while we won’t be discussing spoilers below, there will be references to plot points that you may not have reached yet.

The third season finished by showing us more of the world outside of the walls. The trailer for season 4 shows that this will continue -- and that Erin and the rest of the Scout Regiment will be bringing the fight directly to the people responsible for his condition. We also get to see a few new abnormal Titans, and there’s always the one that was created in the season 3 finale to consider too.

It’s difficult to say more without a lengthy explanation and details that would ruin the series for those who haven’t caught up, but suffice it to say, this season looks set to be just as exciting as the ones before it, and if you listen to the manga readers, it has the potential to be even more so.