How to watch Japanese TV online from anywhere (with a VPN)

Want to be able to continue watching Japanese TV while traveling abroad? Read on to find out how you can unblock geo-restricted content and live stream Japanese TV online outside Japan with a VPN.
Mark Gill TECH JOURNALIST, VPN AND PRIVACY SPECIALIST 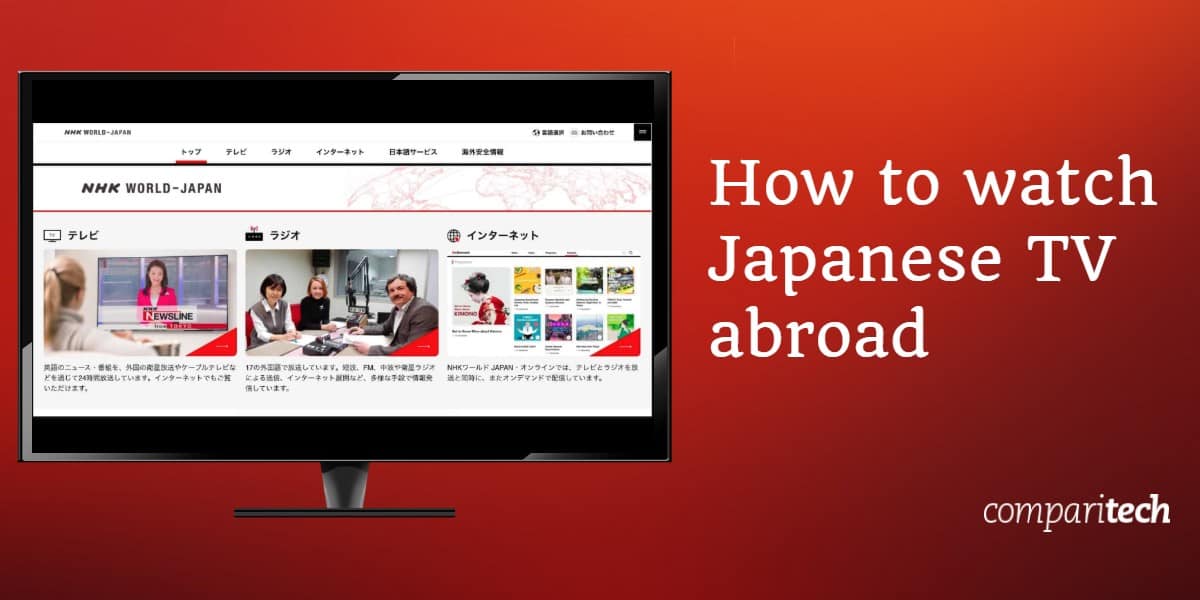 As you’re probably aware, many websites and services (particularly streaming platforms) are unavailable outside of specific countries. This is typically for copyright and licensing reasons. Fortunately, a VPN lets you spoof your location and stream Japanese TV abroad.

In case you’re wondering, a VPN, or Virtual Private Network, routes your internet traffic through an encrypted tunnel. This prevents outsiders such as your ISP or hackers from seeing your true IP address and online activity. In short, connecting to a VPN server offers the advantage of improved online privacy and anonymity while browsing the web.

You’ll find reviews of the best VPNs for watching Japanese TV outside Japan further below. However, here’s a short summary of each in case you don’t have time to read the full article.

How to stream Japanese TV abroad with a VPN

In order to watch Japanese TV shows abroad, you’ll need to connect to a VPN server. This is quick and easy to do. Simply follow the step-by-step guide below and you’ll be streaming outside Japan in a matter of minutes:

Here’s how you watch Japanese TV online with a VPN:

NordVPN is offering a fully-featured risk-free 30-day trial if you sign up at this page. You can use the VPN rated #1 for streaming Japanese TV with no restrictions for a month—great if you want to watch NHK, U-Next, or Hikari TV during a trip overseas.

There are no hidden terms—just tell support staff within 30 days if you decide NordVPN isn't right for you and you'll get a full refund. Start your NordVPN trial here.

What Japanese TV can I watch online for free?

If you connect to a VPN server in Japan, you’ll be able to stream various Japanese TV channels abroad for free:

While many VPNs offer servers in Japan, the quality of these VPNs varies drastically based on factors such as speed and security. We’ve found the best VPNs for watching Japanese TV outside Japan by selecting those that offer the following:

Here’s our list of the best VPNs for watching Japanese TV online from abroad:

NordVPN has a network of over 5,500 servers, some 80 of which are located in Japan. As such, you can use this VPN service to unblock region-locked content from all over the world. This includes Japanese TV such as Fuji TV and TBS TV. As well as offering high-speed Japanese servers, NordVPN has some that are optimized for P2P file-sharing, as well as special obfuscated servers for bypassing strict internet restrictions. Best of all, this is the fastest VPN we’ve tested.

With NordVPN, you can connect up to six devices at once. What’s more, you’ll have access to 24/7 support via live chat and email. NordVPN operates a strict no-logs policy and has been independently audited to prove it. What’s more, your personal data is protected through its use of 256-bit AES encryption. You can also take advantage of DNS and IPv6 leak protection, an automatic kill switch feature, and Double VPN servers for extra security.

Surfshark is a newer VPN that has a rapidly growing network of over 3,200 servers. These servers can be found in Japan and a further 64 countries. Speeds are more than fast and consistent enough for streaming in 1080p HD. Further, this service has strong unblocking capabilities, meaning you’ll be able to connect to a server in Japan and watch Nippon TV, NHK, and TV Tokyo. Best of all, Surfshark doesn’t impose any limits on the number of devices you can connect simultaneously.

Perhaps Surfshark’s main selling point is its sheer number of security features. This starts with its strict no-logs policy that ensures your online privacy is protected. It secures your traffic with 256-bit AES encryption while DNS leaks and a kill switch ensure sensitive data is never exposed. If that’s not enough, you can always connect to a MultiHop (Double VPN) server for an extra layer of encryption. Surfshark also has live chat and email support, both of which are available 24/7.

Surfshark offers easy-to-use apps for the following operating systems: Windows, Mac, Linux, Android, and iOS. You can also download an app for Amazon Fire TV as well as browser extensions for Chrome and Firefox. Manual installation is required for use with routers.

ExpressVPN is a strong all-rounder, making it a great choice for watching Japanese TV abroad. Aside from having a large network of more than 3,000 servers in 94 countries, it offers fast, consistent connections for lag-free streaming. You can use this VPN to unblock NHK, TV Asahi, and more thanks to its servers in Kawasaki, Tokyo, and Yokohama. A single subscription lets you secure up to five devices simultaneously.

Not only does ExpressVPN offer unrivaled performance for browsing and streaming, it’s also highly secure. 256-bit AES encryption means no one can see what you’re doing online. You’re protected from DNS, IPv6, and WebRTC leaks while a kill switch ensures your data cannot be compromised should the VPN connection unexpectedly drop. ExpressVPN doesn’t keep any identifying logs of its users and also offers 24/7 live chat and email support.

To connect to ExpressVPN’s servers, simply download one of the apps. These are available for Windows, Mac, Android, iOS, and Linux. You also have the option of browser extensions for Chrome and Firefox as well as custom firmware for routers.

CyberGhost has an excellent track record when it comes to offering both speed and security. It has one of the largest VPN networks available with approximately 6,000 servers in 90 countries. This includes around 70 servers in Japan for streaming Japanese TV. Indeed, CyberGhost unblocks NHK and Tokyo MX, among others. Unlimited bandwidth allows you to stream and torrent without having to worry about interruptions such as lag or buffering.

Unlike most VPNs, CyberGhost lets each user secure up to seven devices simultaneously. Better still, 24/7 live chat and email support are also on offer should you need it. Protecting your privacy is this VPN’s priority, as evidenced by its strict no-logs policy and use of 256-bit AES encryption. There’s also an automatic kill switch and protection from DNS leaks while CyberGhost’s independently operated NoSpy servers reduce the risk of third party interference.

Connect to a server in Japan via CyberGhost’s apps for desktop (Windows, Mac, and Linux), mobile (Android and iOS), Amazon Fire TV, and Android TV. You can also download browser extensions for Chrome and Firefox. Use with routers requires manual configuration.

HIGHLY SECURE:CyberGhost has over 6,000 servers worldwide including 70+ in Japan. Use it to stream Tokyo MX and NHK. Fast servers and unlimited bandwidth. Protects your privacy with a strict no-logs policy. Use on up to seven devices at once. 45-day money-back guarantee.

IPVanish is a good option for watching Japanese TV abroad thanks to its servers in Tokyo and fast, reliable speeds. Overall, its network is made up of around 1,400 servers which are located across dozens of countries. This means you can use IPVanish to unblock geo-restricted websites and services worldwide. If you’re suffering from throttling, you’ll be happy to know that IPVanish offers unlimited bandwidth, making it perfect for streaming NHK and TBS TV.

One of IPVanish’s most notable features is that you can use it on up to 10 devices at once. While this is a very user-friendly service, it does offer 24/7 support over live chat in case you have any questions. IPVanish takes your security seriously, using 256-bit AES encryption, DNS leak protection, and a kill switch to ensure your data cannot be compromised. Last but not least, a zero-logs policy allows you to browse the web anonymously.

Sign up with IPVanish to access its apps for Windows, Mac, Android, iOS and Amazon Fire TV. In order to use this VPN with Linux and compatible routers, you’ll need to follow manual setup instructions.

SECURE EVERY DEVICE:IPVanish works with Japanese TV channels such as TBS TV. Offers good speeds for streaming and lets you connect all of your devices simultaneously. User-friendly apps and 24/7 support. Zero-logs policy. 30-day money-back guarantee.

PrivateVPN boasts some of the fastest speeds of any VPN. As such, you can connect and expect to stream Japanese TV overseas without excessive lag or buffering. This is a smaller VPN service with approximately 150 servers in 60 countries. It possesses strong unblocking ability and works well with the likes of Nippon TV and Fuji TV. With PrivateVPN, you can connect as many as six devices at once via a single account.

It’s possible to browse the web with your privacy intact as PrivateVPN has a no-logs policy. Your data is secured from hackers and snoopers with 256-bit AES encryption. There’s also protection from DNS leaks and a kill switch. Signup requires little personal information (only a burner email account) while there’s even the option to pay in Bitcoin which is the best payment option for maintaining online anonymity.

PrivateVPN has apps for iOS, MacOS, Android, Windows, and Linux. However, if you’d like to install it directly on your home router, you’ll have to configure it manually.

Hotspot Shield has a network of more than 3,200 servers in 80 countries including Japan. This allows you to unblock and watch Japanese TV such as TV Asahi abroad. However, it also means that you can stream the likes of Amazon Prime Video and Hulu. When it comes to streaming performance, Hotspot Shield is a reliable choice thanks to the fast server speeds. You can use this VPN to secure up to five of your devices at once.

It’s particularly easy to connect to a Hotspot Shield server and obtain a Japanese IP address. In fact, you can do this in just a few seconds. However, 24/7 support is available via live chat to address any issues you might have. In terms of security, Hotspot Shield offers 256-bit AES encryption, a kill switch, and DNS leak protection. What’s more, it doesn’t keep any logs by which you can be identified.

Connecting to a Hotspot Shield server requires downloading an app for Windows, Mac, Android, or iOS. Alternatively, you can use this VPN’s Chrome browser extension. Linux and routers can be configured manually.

Can I watch Japanese TV abroad with a free VPN?

Another difficulty you may experience with a free VPN is unblocking geo-restricted content. Free VPNs struggle in this respect and may not work with Japanese TV such as TV Tokyo or US streaming services such as Netflix. The average free VPN also lacks features, be it live chat support or the option to connect multiple devices simultaneously.

Last but not least, we don’t recommend free VPNs due to their lack of security. Many lack the most essential security features such as encryption and a kill switch. Worse still, some free VPN services spam you with ads or even log your data and sell it to third parties. All in all, free VPNs are extremely limited and may even compromise your privacy.

What Japanese content can I stream with a VPN?

By connecting to a server in Japan, you’ll be able to unblock and stream all sort of Japanese TV shows online: