What is a multi-hop VPN and do you need one?

A multi-hop VPN adds an extra layer of encryption. In this article, we'll go into detail about how multi-hop VPNs work and why someone might need one.
Paul Bischoff TECH WRITER, PRIVACY ADVOCATE AND VPN EXPERT 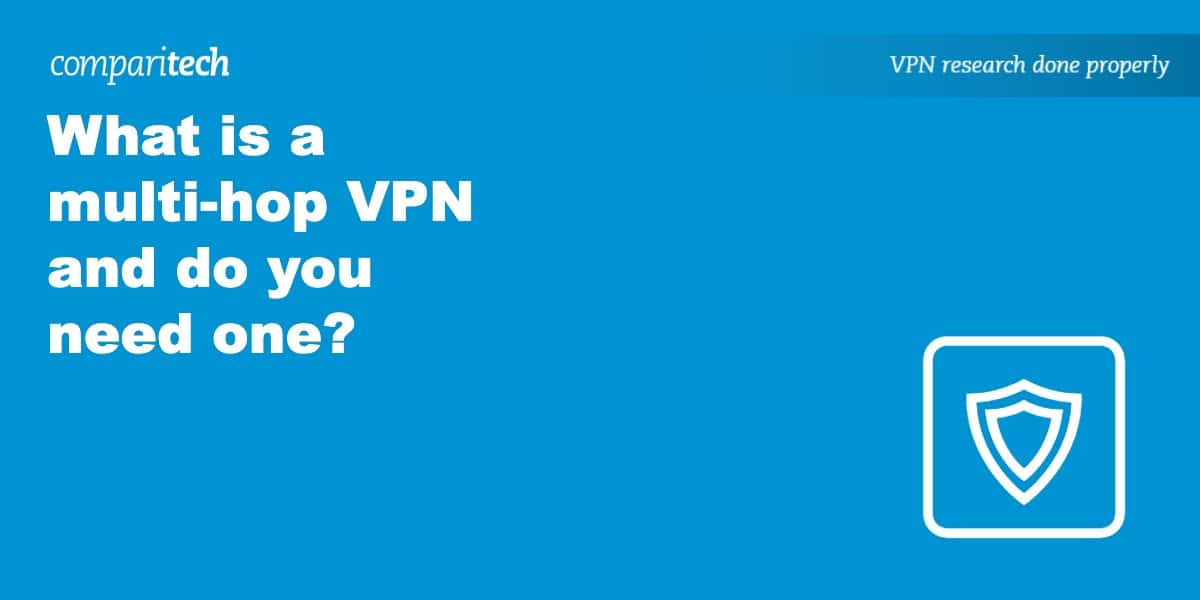 Simply put, a multi-hop VPN adds an extra layer of encryption and an additional server to your normal VPN connection by “chaining” or “cascading” two or more VPN servers together. The purpose is to boost the security and privacy provided by a standard, single-server VPN connection.

Multi-hop VPNs are sometimes called double VPNs, although any number of VPN servers can be included in the chain. This guide will explain everything you need to know about multi-hop VPNs and why you might need one.

What’s wrong with a normal VPN?

A normal VPN connection routes both incoming and outgoing internet traffic through a single VPN server.

The same process happens in reverse for incoming traffic.

A normal setup like this provides sufficient privacy and security for most users. That being said, it’s not without its weaknesses. If that server is somehow compromised, your Internet Service Provider (ISP), government agencies, network administrators, websites, apps, and hackers could correlate the traffic going into the VPN server with the traffic going out. Even though your traffic is encrypted, it can still be correlated to unencrypted traffic through time stamps, amount of data transferred, and the IP addresses of VPN server.

The VPN server can record your real IP address and online activity even if it claims to have a “no logs” policy. Assuming the VPN provider is trustworthy, providers don’t normally own their own data centers, where the servers are housed.

If a well-armed adversary was to somehow compromise your connection to the VPN server—servers in data centers can be hacked, abused by staff, or monitored by government agencies—then they could trace your online activity back to you.

NordVPN is offering a fully-featured risk-free 30-day trial if you sign up at this page. You can use the VPN rated #1 for multi-hop servers with no restrictions for a month—great if you want to see how multi-hop works and if it's something you need long term.

A small handful of VPN providers offer multi-hop VPNs as part of their subscriptions. Our top recommendation is NordVPN, which runs a couple dozen double-hop VPNs to multiple countries. You also get a no-logs policy, fast servers, live support, and strong encryption.

EXCLUSIVE DEAL:Save 75% on NordVPN’s three-year deal here. That works out to only $2.99/mo.

A multi-hop VPN attempts to mitigate these threats. Here’s how a typical double-hop VPN works:

This tunnel within a tunnel solves a few of the problems that normal VPN connections can be affected by:

VPNs are frequently used to bypass censorship, whether in an office or school environment or in an autocratic country like China. If the entity doing the censoring figures this out and blocks a range of VPN servers, a double-hop VPN might be necessary to unblock the web.

Let’s say China blocks or throttles all internet traffic to the US, including US-based VPN servers. If you need to access some content that’s only available in the US, switching to a different country won’t suffice. Instead, a multi-hop VPN could allow you to connect to Canada (or another country) first, and then the US. The censor won’t be able to monitor for the US server, and therefore allows the connection to pass through.

Internet speed and device performance will both take a hit when using a multi-hop VPN.

In a rare few cases, the connection between the two servers might be faster than a direct connection to the second server. In this case, a multi-hop VPN can improve latency by navigating around the roadblock, but this scenario seldom occurs in a way that’s reliable enough for a multi-hop VPN to really benefit users over a single VPN.

Will not protect you from your VPN provider

Multi-hop VPNs mitigate some of the traffic correlation risks associated with single server VPN connections, but they won’t protect you from nefarious VPN providers. If both of the servers in the chain belong to the same provider, it would be simple for that provider to monitor your online activity and keep logs of what you do online. Because the provider has control of both servers, using a double VPN does nothing to protect from the VPN provider.

One solution is to use VPN servers from separate providers (see below), and another is to use your own VPN server in combination with a provider’s. These methods require much more technical expertise to set up compared to the multi-hop options built into some provider’s apps, and are beyond the scope of this article. Suffice to say they have their own challenges and privacy issues.

If anonymity and accessing the dark web is your goal, Tor will probably serve you better than a multi-hop VPN. Tor servers, called nodes or relays, are decentralized, meaning they aren’t operated by a single entity. Tor traffic always passes through at least three of these nodes, which is more than the typical two offered by most multi-hop VPN services.

Each time you access a different domain, your internet traffic takes a different, random route through the Tor network. Each node only knows the location of other nodes that immediately precede and follow it. That means no one node has knowledge of the entire route that your traffic takes to its destination. Similar to a multi-hop VPN, each node removes a layer of encryption, revealing the IP address of the next node in the chain.

Tor does not allow you to choose where these nodes are located, whereas a multi-hop VPN does. Tor is also somewhat vulnerable to traffic analysis, although it’s extremely rare. Many apps and websites might block internet traffic from Tor exit nodes. And Tor is generally slower than a VPN.

It’s possible to combine Tor with a VPN, but experts argue as to whether this actually provides much benefit to the user. The easiest way to use Tor with a VPN is to simply connect to a VPN and then open the Tor Browser. Traffic will first be sent through the VPN, and then through the Tor network.

If you’re feeling like you need to maximize your privacy at the cost of performance, a multi-hop VPN combined with Tor is certainly an option, but probably not one that’s necessary for the vast majority of users.

Read more about how Tor can be used with a VPN here.

Can I use two VPNs at the same time on the same device?

It is possible to connect two VPN clients to separate servers at the same time on a single device. However, this will generally not result in a multi-hop VPN as we have described above. Instead, multiple VPNs on a single device are typically set up for split tunneling. In other words, it creates two parallel tunnels instead of a tunnel inside a tunnel.

Split tunneling uses a set of rules that determine the routes your internet traffic will take, depending on its source or type. For example, you may want BitTorrent traffic to travel through one VPN, and data from all your other apps to travel through a different VPN. So long as the two rulesets that determine this behavior do not overlap, the two VPNs can operate independently.

Simply installing two VPN apps on a single device and connecting both without establishing IP routes ahead of time can cause trouble, such as memory leaks and DNS errors. The exact result varies depending on the particular VPN clients’ implementation.

We tested a few VPNs on Windows 10 just to see what would happen if we connect them at the same time. In our testing, either the first VPN prevented the second from connecting at all (ExpressVPN prevents NordVPN from connecting), or the second VPN took over completely (PrivateVPN took over even though Ivacy was still connected). The VPNs did not operate in tandem, and running a traceroute gave the same results with one VPN connected as with two.

In short, connecting two VPNs at the same time on the same device is not the same as using a multi-hop VPN and can result in undesirable behavior and errors.

If you want to chain VPN servers from different providers, a better option is to set up one VPN on your laptop or smartphone, and the second VPN on your wifi router or a virtual machine. This has a similar result to using a double-hop VPN from a provider like NordVPN. The flow of data looks like this:

The process is reversed for incoming internet traffic. Websites and apps can only trace traffic back to VPN server A, while your ISP can only see that information is being sent to VPN server B.

Is a multi-hop VPN and a double VPN the same thing?

Yes, double VPN is just another term for a multi-hop VPN. In both cases, your data is routed through two or more servers upon connecting. As a result, this data is encrypted multiple times, providing you with an extra layer of security. However, you're likely to experience slower speeds as the data has to travel further before reaching its destination.

Is a multi-hop VPN safe?

Yes, multi-hop VPNs are safe, and in most cases, are more secure than standard VPNs. While an average VPN encrypts your connection to prevent hackers from spying on your data, traffic correlation is still a possibility. A multi-hop VPN provides additional security for your device to prevent more sophisticated attacks.

No, free VPNs do not usually offer a multi-hop feature. Multi-Hop is a relatively new technology that allows you to connect to multiple servers simultaneously and chain them together, thus increasing your level of security and privacy. This feature requires additional costs for the service provider and is unavailable in most free VPN services. If you are looking for a VPN with multi-hop, opt for a premium VPN service. Paid VPN services generally provide more features and better security than their free counterparts.