How to watch DMAX online abroad (outside Spain) with a VPN

Unable to watch DMAX outside Spain? Although this service is region-locked and only available in Spain, you can live stream DMAX abroad with the help of a Virtual Private Network (VPN).
Mark Gill TECH JOURNALIST, VPN AND PRIVACY SPECIALIST 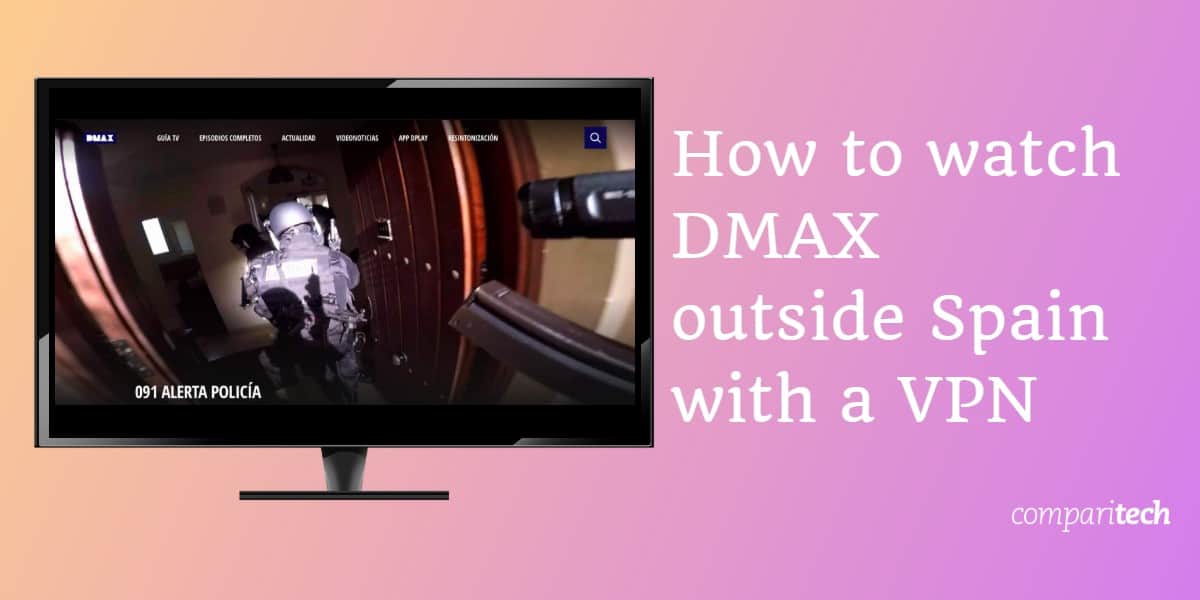 If you have tried to stream DMAX abroad, chances are you found that the video doesn’t even load. This is because DMAX is geo-blocked and unavailable outside certain countries. However, there’s good news. By connecting to a server in Spain via a VPN, you can unblock and watch DMAX online from anywhere in the world.

First, let’s cover what a VPN is and how it works. When you use a VPN, your internet traffic is routed through an encrypted tunnel to the VPN’s server. In doing so, it hides your IP address and location. You’re also provided with a new, temporary IP address that makes it seem as though you’re in the location of your chosen server. For example, by connecting to a server in Spain, you’ll receive a Spanish IP address and be able to unblock DMAX abroad.

How to watch DMAX outside Spain with a VPN

Now we’ll take you through the process of setting up a VPN to watch DMAX outside Spain. It’s surprisingly simple and should only take a few minutes.

Here’s how to live stream DMAX online from anywhere with a VPN:

There are many VPNs on the market but it’s important to know that they can vary wildly in quality. We’ve narrowed down the options to help save you some time. Here’s a list of key criteria we looked for in finding the best VPNs for DMAX:

We’ll explore each of the best VPNs for watching DMAX outside Spain later on. First, below is a quick, at-a-glance guide.

Here’s our list of the best VPNs for watching DMAX abroad (outside Spain):

ExpressVPN is known for its strong unblocking ability and, aside from DMAX, it works with Netflix, Amazon Prime Video, and BBC iPlayer. Server speeds are very fast plus there’s also unlimited bandwidth which means you can stream and torrent without restriction. This VPN’s server network is made up of some 3,000 servers in 90 countries. This includes servers in Barcelona and Madrid, Spain. Furthermore, you can use ExpressVPN to connect up to five devices simultaneously.

When it comes to protecting your privacy, ExpressVPN ticks all the boxes. For starters, it doesn’t keep any logs by which you can be identified. There’s also 256-bit AES encryption, DNS, IPv6, and WebRTC leak protection, and a kill switch feature. ExpressVPN is headquartered in the British Virgin Islands and isn’t subject to any mandatory data retention laws. The apps are particularly user-friendly while 24/7 live chat support is also on offer.

An ExpressVPN subscription provides you with access to apps for desktop (Windows, Mac, and Linux) and mobile (Android and iOS). There’s also Chrome and Firefox browser extensions and custom firmware for routers.

BEST VPN FOR DMAX:ExpressVPN is our top recommendation. Plenty of servers in Spain for streaming DMAX. Fast, reliable speeds. Also works with Netflix and Amazon Prime Video. No-logs VPN that includes 24/7 live chat support and excellent apps. You can try it risk-free thanks to the 30-day money-back guarantee.

NordVPN has dozens of servers in Spain capable of unblocking DMAX abroad. This is one of the larger VPNs on the market, offering more than 5,000 servers worldwide. As such, you can unblock streaming services including Netflix and Disney+ or social media sites such as Facebook and Twitter. Furthermore, this service offers specialty servers including some that use Onion Over VPN for an extra layer of privacy and P2P servers for optimized file sharing.

The NordVPN apps follow a simple design and make finding and connecting to a server easy. In particular, you can see the load of each server and even favorite specific servers. Despite the ease of use, 24/7 live chat and email support are available, NordVPN is headquartered in Panama where there are no mandatory data retention laws. Regardless, this is a no-logs service. It also uses 256-bit AES encryption, a kill switch and DNS and IPv6 leak protection to keep you safe online.

You can secure your devices via NordVPN’s apps for Windows, Android, Mac, iOS, Linux, and Android TV. Browser extensions are also available to download for Chrome and Firefox. While it can be used with routers, this requires manual installation.

CyberGhost is one of the best VPNs for streaming DMAX thanks to its many high-speed servers in Spain. Overall, this VPN service has over 6,000 servers in 90 countries. You can also use it to unblock Netflix US as well as BBC iPlayer and Hulu. If you’ve got several devices to secure, you’ll be pleased to know that CyberGhost allows up to seven simultaneous connections.

While CyberGhost is known for excellent streaming performance (its fast enough to watch live HD video without lag or buffering), it doesn’t compromise on security. Your data is secured with 256-bit AES encryption while you’re also protected from DNS and IPv6 leaks. A kill switch cuts your internet traffic in the event of the VPN connection dropping. This ensures your data cannot be compromised. Last but not least, CyberGhost operates a strict no-logs policy which means you can stay anonymous online.

IPVanish provides good speeds for streaming DMAX outside Spain. Its server network covers dozens of countries. This includes servers in Madrid and Valencia, Spain. Unlimited bandwidth means streaming and torrenting without restriction. Indeed, this VPN also works with Netflix US. When it comes to securing your devices, the good news is that IPVanish allows you to connect up to 10 devices simultaneously.

This is a no-logs VPN which means your personal information stays private at all times. It uses 256-bit AES encryption and a kill switch to ensure your data’s security, and you’re also protected from DNS leaks. IPVanish has also teamed up with SugarSync to offer a plan that also includes secure file storage. While IPVanish apps are user-friendly, 24/7 live chat support is offered should you need it.

IPVanish apps are available for the following platforms: Windows, Mac, Android, iOS, and Amazon Fire TV. It can also be used with Linux and routers although this requires manual installation.

LAG-FREE STREAMING:IPVanish is fast and lets you stream DMAX without lag and buffering. Can also be used to unblock Netflix US. Secure 10 devices simultaneously. Secure service with encryption and a zero-logs policy. Also includes 24/7 live chat support. 7-day money-back guarantee.

PrivateVPN has servers in 60 countries, including Spain. One of the faster VPNs on the market, it’s a particularly good choice for streaming. You’ll be able to use it to watch DMAX abroad without any noticeable lag or buffering. What’s more, it also unblocks Netflix, Amazon Prime Video, and BBC iPlayer. With a single account, you can use PrivateVPN to connect six devices at once, all to unique IP addresses.

The desktop and mobile apps provided by PrivateVPN allow you to connect to a server in a matter of seconds. Although easy to use, live chat support is available should you have any issues. When it comes to your security, PrivateVPN uses 256-bit AES encryption, DNS leak protection, and a kill switch. It’s also a no-logs service so you don’t need to worry about your browsing history being sold to third parties.

You can unblock DMAX Spain by connecting to the PrivateVPN apps for Windows, Mac, Android, and iOS. Use with Linux and routers requires following manual setup instructions.

STRONG UNBLOCKER:PrivateVPN is able to unblock many streaming services including DMAX, Netflix, and BBC iPlayer. Very easy-to-use service thanks to user-friendly apps and live chat support. Keeps you safe online with encryption and a no-logs policy. 30-day money-back guarantee.

Surfshark is worth considering if you have lots of devices to secure. That’s because it offers unlimited simultaneous connections. This VPN has a rapidly growing network of more than 1,000 servers. With it, you can unblock all sorts of content including streaming services such as DMAX, HBO, and Netflix. Speeds are fast and consistent for streaming without interruption. Live chat support is available 24/7 should you have any issues.

This VPN has a strict no-logs policy and is headquartered in the British Virgin Islands — beyond the jurisdiction of intelligence alliances such as Five Eyes. Furthermore, it has MultiHop (double VPN) servers for an extra layer of security. Combined with 256-bit AES encryption, DNS leak protection, and a kill switch, Surfshark is a highly secure VPN to use. Indeed, there’s also the option to pay for the service in Bitcoin for added anonymity.

Surfshark apps can be downloaded for Windows, Android, Mac, iOS, Linux, and Amazon Fire TV. Chrome and Firefox browser extensions are also on offer. Compatible routers can be configured manually.

Hotspot Shield allows you to unblock geo-restricted content from over 80 countries globally, including Spain for DMAX. In total, it offers more than 3,000 servers, many of which are located in the United States. This means you can even unblock the likes of Amazon Prime Video and Hulu. One key reason to choose Hotspot Shield is its fast speeds which make for stress-free streaming, even at high resolutions.

This VPN service includes live chat support which is available 24/7. With the Hotspot Shield apps, you can connect to a server in a single click, making this a good choice for beginners. When you connect to Hotspot Shield, your data is secured with 256-bit AES encryption while there’s also a kill switch and protection from DNS leaks. It’s also important to know that this VPN doesn’t keep any identifying logs of users such as IP addresses.

Hotspot Shield apps are offered for the following operating systems: Windows, Mac, Android, and iOS. There’s also a browser extension for Chrome. Linux and routers are not supported.

Can I watch DMAX outside Spain with a free VPN?

Free VPNs are unreliable when it comes to unblocking geo-blocked services such as DMAX. Indeed many fail to unblock streaming services including Netflix, BBC iPlayer, and DAZN. One of the main problems is that many free VPNs are slow and likely to throttle your bandwidth. This makes streaming difficult and likely to be filled with interruptions such as lag and buffering. The average free VPN also lacks servers which can make it difficult to unblock content in certain countries.

You may also find free VPNs to be very limiting. For example, you’re unlikely to have access to customer support while you may only be able to connect one device at a time (the best-paid VPNs have 24/7 live chat support and allow multiple simultaneous connections). Last but not least, free VPNs usually lack important security features such as high-end encryption. They may even log your data and sell it to third parties without your knowledge.

What can I watch on DMAX Spain?

DMAX Spain shows a mix of reality TV shows and documentaries covering topics including crime, nature, motors, survival, and more. Here are some of the examples of shows you can watch on DMAX: