How to watch DMAX online abroad (outside Germany) with a VPN

If you’re traveling outside Germany but still want to be able to watch DMAX, you’ll need a VPN. Read on to find out how to unblock and live stream DMAX from anywhere in the world.
Mark Gill TECH JOURNALIST, VPN AND PRIVACY SPECIALIST 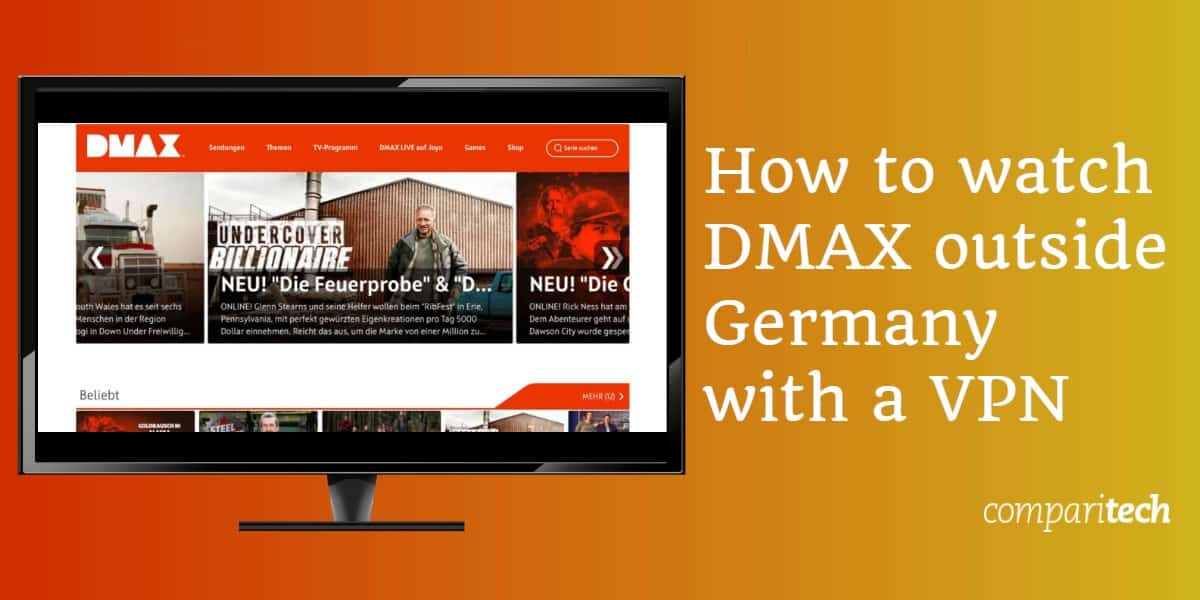 When you try to watch DMAX outside Germany, you’ll come across the following error message:

The reason for this is that DMAX content is region-locked and only available in Germany. This means that if you’re traveling abroad (if you’re on vacation, for instance), you’ll need a VPN to be able to access the German content library.

A VPN, or Virtual Private Network, encrypts your internet traffic, redirecting it through one of its own servers. Once connected, your actual IP address and location will be hidden and replaced with those of the server you’re using. This means that if you use a German server, it’s possible to access geo-restricted platforms like DMAX while you are abroad.

How to watch DMAX outside Germany with a VPN

One of the best things about using a VPN to unblock DMAX is that it’s surprisingly quick and easy. Indeed, you could be watching DMAX outside Germany in a matter of minutes. We’ll take you through the process, step-by-step, below.

Here’s how to watch DMAX online from anywhere using a VPN:

When looking at VPNs, it’s important to consider everything from speed to security. We’ve come up with the best VPNs for DMAX by only selecting those that offer the following:

Don’t want to read the full article just yet? Here’s a summary of the best VPNs for watching DMAX outside Germany (we’ll cover each in detail later on).

Here’s our list of the best VPNs for watching DMAX abroad (outside Germany):

NordVPN is one of the biggest VPNs on the market. It has a network of over 5,000 servers, several hundred of which are located in Germany. This makes it easy to unblock DMAX wherever you are in the world. NordVPN’s servers in Germany include those optimized for P2P-related activities as well as obfuscated servers for bypassing strict internet restrictions. Aside from DMAX, NordVPN lets you unblock Netflix, BBC iPlayer, Hulu, and more.

When you use NordVPN, you can connect as many as six devices at once via a single account. What’s more, the apps are simple to navigate while there’s also 24/7 live chat available. This VPN takes security seriously, offering a strict no-logs policy. Headquartered in Panama, NordVPN isn’t subject to any mandatory data retention laws. Furthermore, its 256-bit AES encryption, DNS and IPv6 leak protection, and a kill switch all help enhance your online security.

BEST VPN FOR DMAX:NordVPN is our #1 choice. Hundreds of servers in Germany for unblocking DMAX. Also works with Netflix and Amazon Prime Video. Use on up to six devices at once. User-friendly apps and 24/7 live chat support included. No-logs VPN with strong security. Comes with a risk-free 30-day money-back guarantee.

Surfshark is well worth considering if you’re planning on sharing your VPN with family. The reason for this is that it allows unlimited simultaneous connections, setting it apart from most VPNs on the market. This VPN has approximately 3,200 servers in 60 countries, including Germany. Its strong unblocking ability means it works not only with DMAX but Netflix, Disney+, and HBO.

Aside from being easy to use, the Surfshark apps offer a wide range of security features that serve to protect your privacy. In particular, you can expect 256-bit AES encryption, DNS leak protection, and a kill switch. However, this is also a no-logs VPN service that offers Double VPN servers for twice the level of encryption and an ad and malware blocker. If you have any questions about these features, live chat support is available to you, 24/7.

You can unblock DMAX outside Germany via the Surfshark apps for Windows, Mac, Linux, Android, iOS, and Amazon Fire TV. Browser extensions are available for Chrome and Firefox. Surfshark can be used with select routers but requires manual installation.

ExpressVPN is a great choice for streaming DMAX. Offering high-speed servers and unlimited bandwidth, it allows you to stream in high definition without having to worry about buffering or lag. A network of more than 3,000 servers in 94 countries including Germany means you’ll have no problem accessing region-locked content worldwide. ExpressVPN also works reliably with Netflix and Amazon Prime Video. A single subscription lets you secure up to five devices simultaneously.

The ExpressVPN apps are very easy to use and allow you to connect to a server in Germany in seconds. Should you have any questions, 24/7 live chat and email support is available. This VPN doesn’t keep any identifying logs of users and uses 256-bit AES encryption to secure your data. There’s also protection against DNS, IPv6, and WebRTC leaks, plus a kill switch that cuts your internet traffic in the event the VPN connection drops, preventing your data from being exposed. Last but not least, ExpressVPN gives you the option to anonymously pay in Bitcoin.

You can secure your devices via the ExpressVPN apps for Windows, Mac, Linux, Android, and iOS. There’s also custom firmware for routers and browser extensions for Chrome and Firefox.

WATCH ALMOST ANYTHING:ExpressVPN is fast and reliable, making it a great choice for DMAX, Netflix, and more. Over 3,000 servers in 94 countries, including Germany. Highly secure VPN with user-friendly apps. 24/7 support. Includes a 30-day money-back guarantee.

CyberGhost stands out for its impressive offering of servers in Germany. Over 700 servers are available across the German cities of Berlin, Dusseldorf, and Frankfurt. In fact, the entire network consists of more than 6,000 servers in 90 countries. CyberGhost is a very fast VPN which makes it a great choice for browsing, streaming, and torrenting. You can use it to watch DMAX abroad, as well as popular streaming services such as Netflix US.

With CyberGhost, it’s possible to secure all of your devices because it allows up to seven simultaneous connections. While the apps make it easy to choose and connect to a server, live chat support is available 24/7. This VPN service operates a strict no-logs policy and uses 256-bit AES encryption. There’s also DNS leak protection and an automatic kill switch feature. You’ll even have access to CyberGhost’s independently operated ‘NoSpy’ servers.

IPVanish is a fast, secure VPN service with dozens of servers in Frankfurt, Germany. Offering unlimited bandwidth, it doesn’t limit or throttle your connection. As such, it’s a good option for streaming DMAX. What’s more, IPVanish also unblocks Netflix US and offers hundreds of US servers. When it comes to simultaneous connections, this VPN is better than most as it has no limits (most VPNs only allow up to six).

When using the IPVanish apps, you can choose to automatically connect to the best available server to save time. Alternatively, it’s possible to search by a list of countries as well as via a map or even by latency. The apps ensure your online security through the use of DNS leak protection, 256-bit AES encryption, and kill switch. Just as important, IPVanish doesn’t keep any logs so you can browse the web with peace of mind.

Connect to a server in Germany via the IPVanish apps for Windows, Mac, Android, iOS, and Amazon Fire TV. You’ll need to follow manual setup instructions for use with Linux and routers.

PrivateVPN is one of the faster VPNs for streaming DMAX. Although this is a smaller service with around 150 servers, some of these are located in Frankfurt and Nuremberg. Overall, its server network is spread across 60 countries which means you can even unblock Netflix and BBC iPlayer, among other streaming services. You can use PrivateVPN to protect up to six of your devices simultaneously.

Although PrivateVPN is very easy to use, live chat support and remote help and installation are available should you need them. The presence of both simple and advanced menus means it’s suitable for users of all levels of experience. Security features include 256-bit AES encryption, a kill switch, and protection from DNS leaks. It’s also possible to sign up anonymously with a burner email address and by paying in Bitcoin.

PrivateVPN apps are available for desktop (Windows, Linux, and Mac) and mobile (Android and iOS). You can also use this VPN with select routers but it requires manual configuration.

USER-FRIENDLY:PrivateVPN works with lots of streaming services including DMAX and Netflix. Very easy-to-use desktop and mobile apps. Connect up to six devices. Secures your data with encryption and no-logs policy. 30-day money-back guarantee.

Hotspot Shield provides plenty of choices when it comes to server locations. It has over 1,800 servers in 80 countries. This includes Germany for unblocking DMAX abroad. One of the main advantages of this VPN is that it offers excellent speeds for browsing and streaming. You can stream HD content from Netflix and Amazon Prime Video without having to worry about lag interrupting your viewing.

This VPN service includes 24/7 live chat support which makes it easy to solve any issues. However, you’re unlikely to have too many problems since the apps are quick and easy to use. What’s more, you can connect as many as five devices at once. It’s worth knowing that Hotspot Shield doesn’t keep logs by which users can be identified. Furthermore, it secures your data with 256-bit AES encryption and offers a kill switch and DNS leak protection.

Hotspot Shield apps are available for the following operating systems: Linux, Windows, Android, Mac, and iOS. However, bear in mind that routers have to be configured manually.

Can I watch DMAX outside Germany with a free VPN?

While some free VPNs are able to unblock DMAX outside Germany, we don’t recommend them. For starters, they’re notoriously slow. That’s because they tend to have very few servers and too many users to meet demand. As a result, you’re highly likely to encounter excessive buffering and lag when streaming. You will also find it difficult to unblock some streaming services such as Netflix and DAZN.

Another area of concern surrounding free VPNs is security. Few free VPNs really protect your privacy well enough, and they often have very few security features. They may not use 256-bit AES encryption to keep data secure, for example. It’s also important to consider how a free VPN makes its money. This may be through spamming you with ads or even logging and selling your data to the highest bidder. For these reasons, you’re better off with a quality paid VPN.

What can I watch on DMAX Germany?

The majority of DMAX Germany content consists of reality TV shows and documentary series. Here’s a list of some of the shows you can watch: