Installing Alluc Kodi add-on: Is it safe? Are there alternatives?

Are you wondering why your Alluc addon is no longer working? This guide covers current issues with the Alluc Kodi addon and some alternatives for those looking for TV shows and movies. 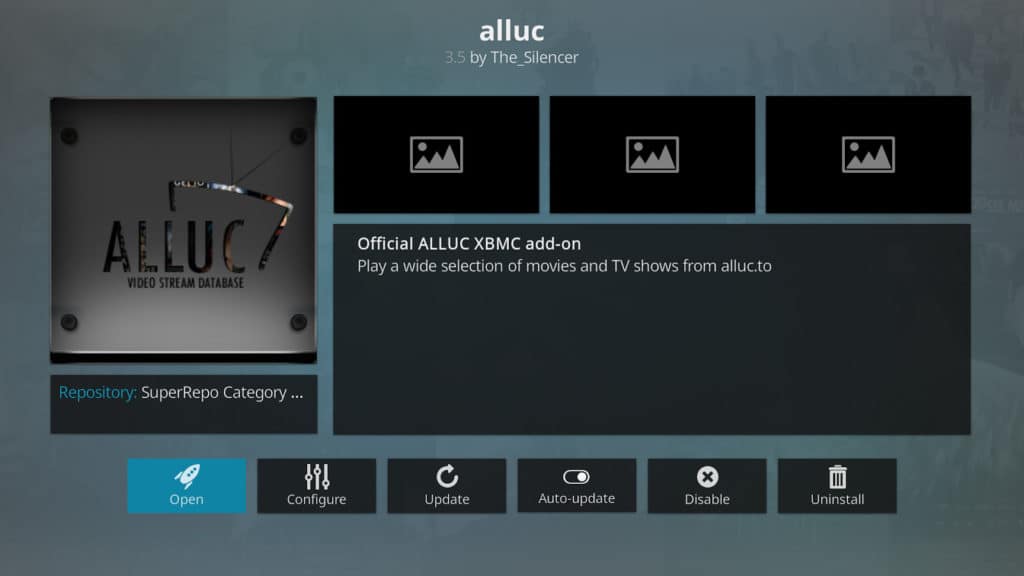 If you’re looking to install and use the popular Alluc Kodi addon, we have some unfortunate news for you. As of March 8, 2018, Alluc has officially closed its doors.

Alluc, (pronounced “all you see ») helped users more easily access more content online. However, Alluc is not unavailable, both as a Kodi addon and as an online service. In an email sent to users, Alluc’s developers stated, « Today, the Alluc search engine has been discontinued…After 13 years of Alluc, we decided to take a break and focus on other projects. Over this last decade, Alluc served more than one billion unique users in total and we would like to thank all of you for your support over the years! »

As of now, those who are looking to use Alluc on Kodi will be a bit out of luck. Even still, while it was still available, not all of that content access through Alluc was fully or legally licensed.

In this article, we’ll be explaining what Alluc was, how it worked, and how it was configured it to browse only official content. We’ll also be addressing some of the privacy issues that all Kodi add-ons share.

There has been a lot of discussion about Kodi in the news recently. While using Kodi is completely legal, much of the negative attention it has received is due to some third-party add-ons which offer unrestricted access to copyrighted content. What is legal in one place may not be in another, so it is vital that Kodi users research the laws in their country before using Kodi to stream online content.

There is no such thing as impenetrable software, Kodi included. While official add-ons are generally created with stringent validation processes in place and are rigorously tested, third-party add-ons give no such assurances. As a result, they may contain unpatched vulnerabilities that a hacker could use to gain access to your system. If this happens, the attacker would have the contents of your hard drive at their fingertips, as well as anything your internet browser has saved such as passwords or credit card details. They could even use a Man-in-the-Middle (MitM) attack to intercept your online traffic after the attack.

There are several cases wherein internet service providers (ISP) have been caught intentionally limiting their customers’ internet speeds. This is usually to discourage their customers from streaming videos online and can happen regardless of how much bandwidth you pay for.

A good VPN can protect you from both of these threats. By encrypting all traffic to and from your computer, it makes it useless to any outside observer. Someone using a MitM attack would find themselves unable to track your activities, and as your ISP couldn’t either, they’re less likely to automatically throttle your connection. This could help prevent the buffering and time-out problems that some people encounter.

For Kodi users, IPVanish is one of the best choices. It has servers in more than 50 countries and because they maintain these themselves, it can provide a fast and stable connection that allows you to get the best streaming experience possible.

Unlike some VPN providers, IPVanish does not keep any logs of your traffic. This means that your activities can remain private, even in the face of outside interference. Additionally,  IPVanish works with every Kodi add-on we’ve tested and can be installed on an Amazon Firestick to allow you to stay protected no matter where you are.

What was the Kodi Alluc addon? 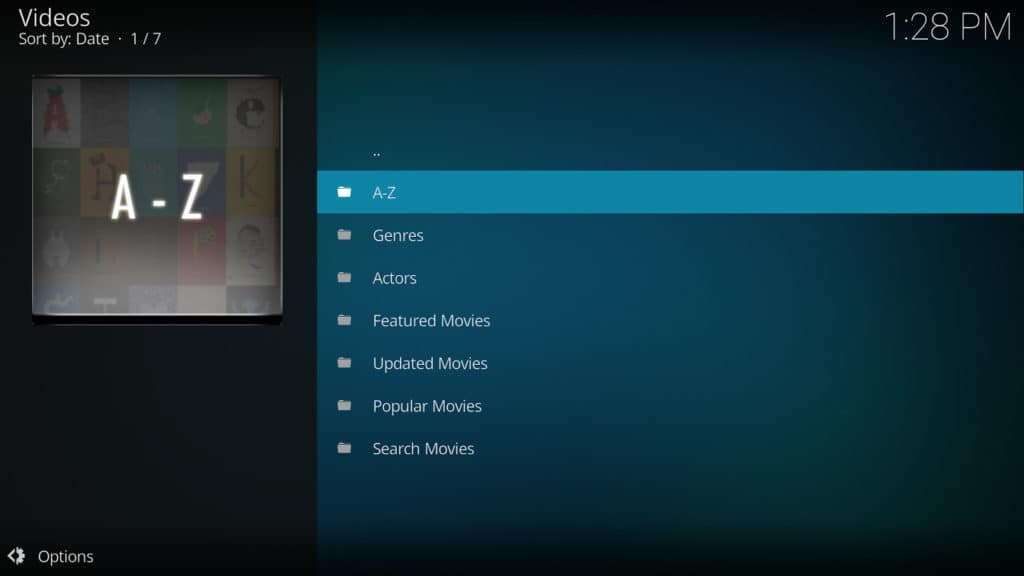 The Kodi Alluc add-on provided some of the same functionality that the Alluc website did. If you had an Alluc account, you could log in using the settings menu. This was optional but allowed you to view your watchlist and read any messages that you received from other users.

This add-on offered access to movies and TV shows, but not live content or music. Its library of links was fairly well organized and grouped by category. The biggest problem with Alluc was that the vast majority of its content was unlicensed. It was possible to turn off specific sources, however, there were dozens of unofficial providers and just a handful of official ones. As such, there was a significantly smaller media library available for users looking to watch licensed content.

Here is where things got confusing: While this was an official Alluc add-on, because of its preoccupation with unlicensed content, it was treated as third-party Kodi add-on. Now that Alluc is gone, you’ll need some alternatives to access the same type of content made available through Alluc

Alluc not working? Try these alternatives to the Alluc addon

Although the Alluc add-on offers legitimate content, it has to be configured first to remove all of the less scrupulous providers. There are several official Kodi add-ons that bypass this step by only delivering licensed content in the first place, and we believe that most users would be better served by one of these instead. 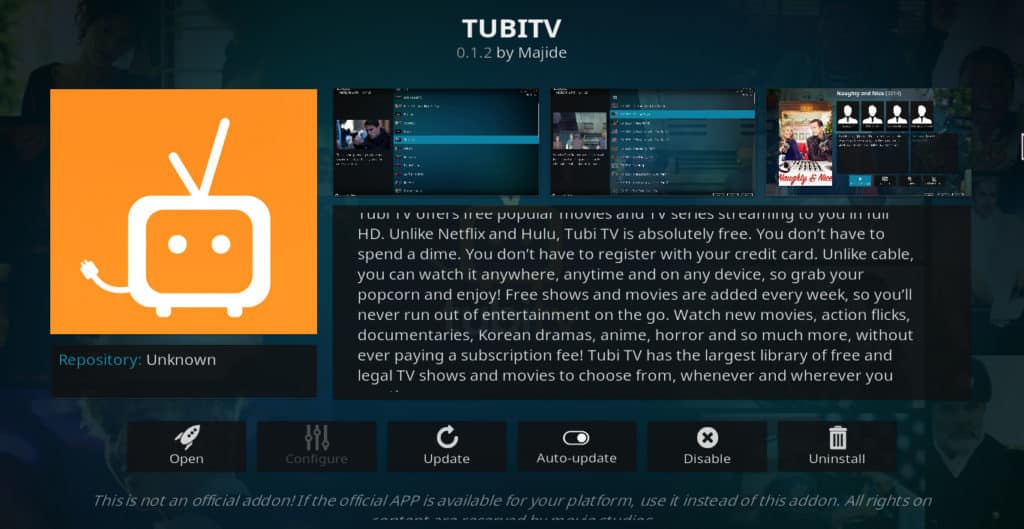 TubiTV is one of the best Kodi addons around. In fact, it’s one of the best streaming services available, even if it’s still relatively unknown. A project designed to offer TV shows and movies for free, TubiTV now has over 50,000 titles on offer, all for no cost. The service is ad-supported, but still has over 600 films rated « fresh » on Rotten Tomatoes.

You can use TubiTV on Kodi and bypass the advertisements. This makes Kodi the best place to watch TubiTV streams. Additionally, you’ll likely want to use a VPN with TubiTV. The service has a large library of content, but much of that content is restricted to different geographic locations (U.S., U.K., and Canada). A VPN like IPVanish will help you bypass those geographic content restrictions, making it possible to enjoy the full TubiTV library.

You can read more about the addon in our TubiTV installation guide.

Like TubiTV, Crackle is an ad-supported, free streaming service. And like TubiTV, you can avoid the ads by streaming Crackle through Kodi. Crackle is a project from Sony Entertainment, as well. As a result, the majority of the TV shows and films available through this platform are Sony’s own content. Nevertheless, most of the movies and shows available are high quality and highly rated.

The only downside to Crackle is that its content library is a bit small. Where TubiTV has tens of thousands of TV shows episodes and movies, Crackle has just around 150. Still, if you’re looking for quality, slightly older movies and shows, Crackle is made to please. The service is currently only available in the U.S., however, so you’ll need a VPN if you’re outside of the U.S.

You can find the Crackle Kodi addon in the official Kodi addon repository. For more on Crackle, read out addon installation guide.

YouTube is the first thing people think of when they hear “online video,” and with good reason: it has the largest library of licensed content available on the internet. This library contains everything from public domain movies like 1963’s Charade to experimental internet-based TV shows The official Kodi add-on makes it available across all of your devices.

This add-on also maintains much of YouTube’s functionality. You can view your subscribed channels, watch history, playlists, likes and dislikes from within Kodi. It even has a dedicated section for live video content, something YouTube has been trying to encourage its users to create recently.

There are a couple of good reasons to use this add-on.  Importantly, it removes the ads from videos, which helps you enjoy them, particularly if you’re a fan of long-form content. Additionally, as YouTube is user-moderated, there’s a very low chance of you accidentally coming across copyrighted content.

FilmOn.TV is a website that offers access to live TV and radio streams from several different countries. Many of these streams are free to watch and completely legitimate. There are some additional channels that require a FilmOn subscription, but this is completely optional.

The FilmOn.TV Kodi add-on makes it very easy to find what you’re looking for. Content is grouped both by genre and by its country of origin, making it great for people living away from home. There is no search function, but if you know the name of the channel you’re looking for, you can find it in the alphabetical channel listing.

Where FilmOn struggles is in providing on-demand content. There is a selection available, however it’s fairly limited. Nevertheless, there’s enough variety in the live streams that you’ll never be short of something to watch.

The FilmOn.TV Kodi add-on can be found in the SuperRepo Category Video repository.

The FilmRise – YouTube Kodi add-on takes streams from the YouTube accounts of an independent distributor named FilmRise and allows you to watch them through Kodi.

This add-on offers a good selection of TV shows, documentaries, and movies. As you might expect, there aren’t any blockbuster films here, but there are some classics like 1998’s The Acid House.

There’s no search function, unfortunately, but the content is grouped fairly well with a few exceptions (there are both “TV” and “Television” categories, for example). TV shows with multiple episodes have their own playlists, and there are some with several seasons on offer.

The Alluc Kodi add-on has a large content library, but it primarily contains unlicensed TV shows and movies. As a result, it is of little use to Kodi users who are looking for legitimate sources of media.

As a third-party add-on, Alluc comes with greater risk than an official alternative. While Alluc.ee has an official Twitter page, this only discusses the status of the website itself and not the Kodi add-on. Since legitimate Kodi forums do not allow discussion of third-party add-ons, this means that if the add-on were to be hijacked, there would be very few reliable sources of information. There is a very good chance that your system would be compromised before you knew that there was a problem.

Simply put, this add-on forces legitimate Kodi users to jump through hoops while offering people looking for unlicensed content a far more streamlined experience. This is not a mindset we are fond of, and considering the number of wholly legitimate alternatives, we see no reason to use this add-on.