Looking to install the Joshua Kodi addon? Is it safe and legal to use? 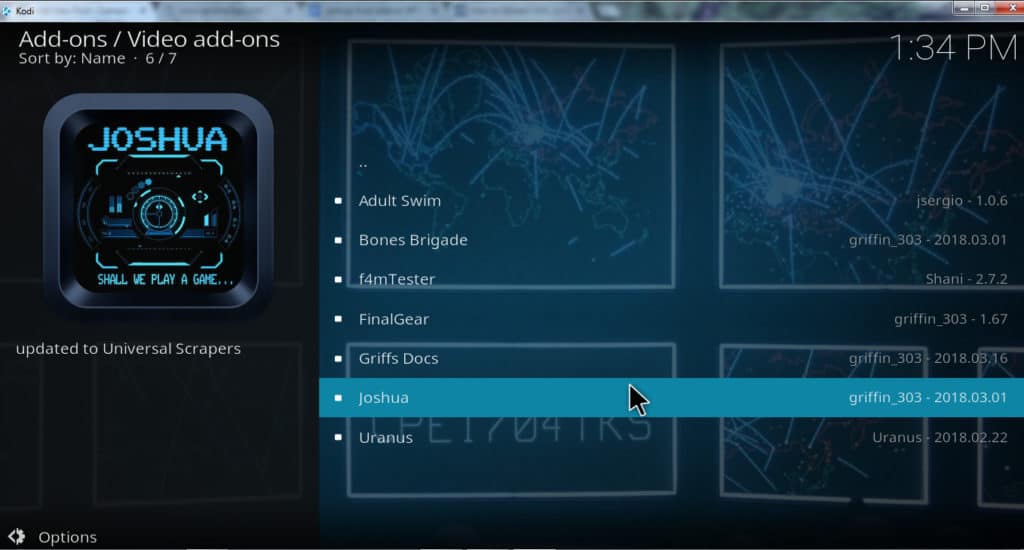 Looking for free documentaries, movies, and TV shows? If so, you may have heard of the Joshua Kodi addon. But should you install the Joshua addon on your computer? Is it legal to use? And if you don’t want to use Joshua, what other options exist to play free movies and shows through Kodi?

This article will explain the security, privacy, and legal issues that arise from installing the Joshua Kodi addon. It will also suggest some alternative ways to get free documentaries, movies, and shows through Kodi.

Kodi is media-player software that allows users to stream videos from practically anywhere on the Internet. It’s become popular with “cord-cutters” who want to escape from having to pay high cable bills for bundles of channels, some of which they may never watch. Kodi can be installed on popular TV devices like the Amazon Fire Stick, Apple TV, and Nvidia Shield. It can also be installed on a PC, Mac, or Android or iOS phone.

Read more: What is Kodi? How can I get started using it?

Whenever you stream video through Kodi or any other software, you should always protect your privacy with a VPN. If you don’t use a VPN, streaming sites can find out your location. They may use this info to block you from viewing content you want to see. A VPN allows you to have an IP address from many different locations, preventing the streaming site from knowing where you are actually connecting to the Internet from.

A VPN will also help to prevent your ISP from knowing that you are streaming video. This can help avoid buffering caused by ISP speed throttling. In addition, VPNs make man-in-the-middle attacks difficult for hackers to perform, since VPNs encrypt your data and make it unreadable to persons who don’t hold the private key.

Not all VPNs are good for streaming video. Some don’t have servers in enough countries to consistently prevent geoblocks. Many invade users’ privacy by keeping logs. Most do not have apps for popular streaming devices like the Amazon Fire Stick.

For these reasons, we recommend IPVanish for Kodi users. It has servers in over 60 countries, including the U.S., E.U., U.K., Australia, Japan, China, India, and many others. It has a strict policy against keeping logs. It also has an app for Amazon Fire TV/Fire Stick and Nvidia Shield.

Should you install the Joshua Kodi addon ?

Joshua Kodi addon is a relatively new addon. It offers three categories of content: documentaries, movies, and TV shows. These categories are then further subdivided into sections like “popular,” “top rated,” “airing today,” and “now playing.” There is also a search function available.

Because of the robust content and easy-to-use menu, Joshua has a become a very popular Kodi addon. But is it safe to use? And is it legal?

Before trying to install Joshua, users should be aware that this addon does not host any content itself. Instead, it searches through websites for streams of major motion pictures, cable TV shows, and other popular content. When it finds one of these streams, it connects to the website that hosts it and plays it for the user.

The problem with this strategy is that the websites used by Joshua do not actively try to remove unlicensed content. As a result, most of the videos provided by this addon are in violation of international copyright laws. If you are looking for legal streams of your favorite movies and shows, you are not likely to find them using Joshua.

In addition to this legal/ethical concern, users should also be aware that Joshua was developed by an anonymous person who goes by the Twitter handle, “Mr. Blamo.” Since no one knows Mr. Blamo’s true identity, this means there would be no way for users to seek damages against him if the Joshua addon was to harm users’ devices.

Because the developer is anonymous, there is also the possibility that the domain hosting Joshua could expire and move into the hands of someone else without users’ knowledge. This domain could then be used to automatically update the devices of Joshua users and install malicious code.

Because of these privacy risks and because of the fact that Joshua provides mostly unlicensed streams, we do not recommend installing Joshua Kodi addon. Instead, we recommend the alternative addons listed below.

The best alternative to Joshua is the Tubi TV Kodi addon. Tubi TV is a streaming video site with a catalog of over 20,000 TV shows and movies. The site is funded through advertisements that interrupt the videos whenever they are played through a web browser. However, the Kodi addon blocks all of these advertisements and allows you to watch Tubi TV without interruption.

Many of the shows and movies on Tubi TV are blocked to users outside of specific countries. However, a VPN can easily bypass these blocks and give users complete access to the Tubi TV catalog.

Tubi TV is in the official Kodi addon repository. Here is a complete guide to installing and using Tubi TV.

Other alternatives to the Joshua Kodi addon

In addition to Tubi TV, here are some other Kodi addons that can serve as alternatives to Joshua. 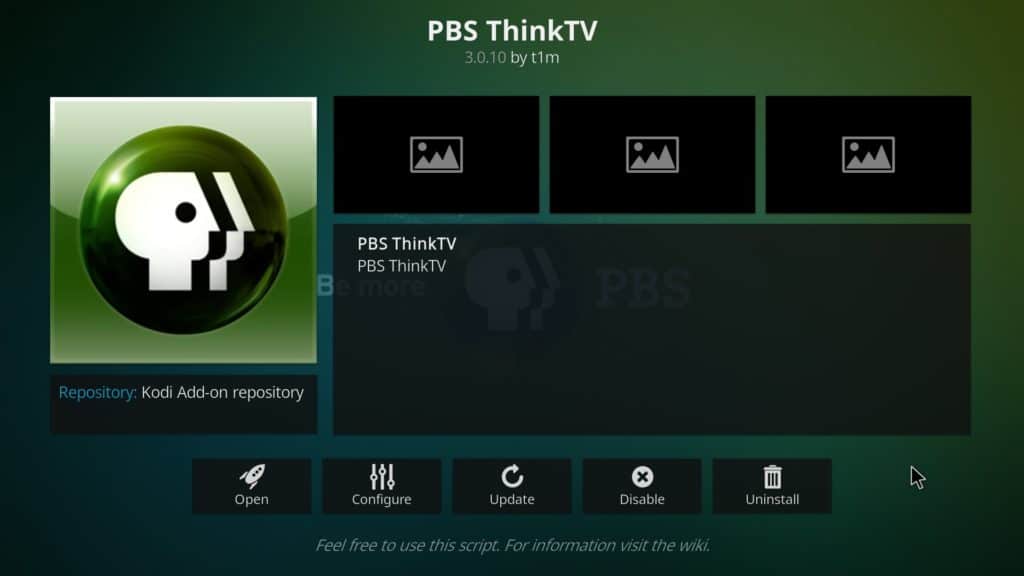 For documentaries, PBS Think TV is a great alternative to Joshua. It carries documentaries from many different genres, including science and nature, food, history, culture, and others.

For shows and movies, Crackle is another excellent alternative to Joshua. Crackle is an ad-supported streaming video website similar to Tubi TV. Like Tubi TV, its advertisements can be avoided by using the Kodi addon to watch its content.

Crackle’s catalog is smaller than Tubi TV’s, but it does have many highly-rated shows and movies. For example, it carries Terminator: The Sarah Connor Chronicles, SuperMansion, I Know What You Did Last Summer, and Once Upon a Time in Mexico.

The Crackle Kodi addon can be found in eracknaphobia’s repo. Here is how to install and use Crackle for Kodi. 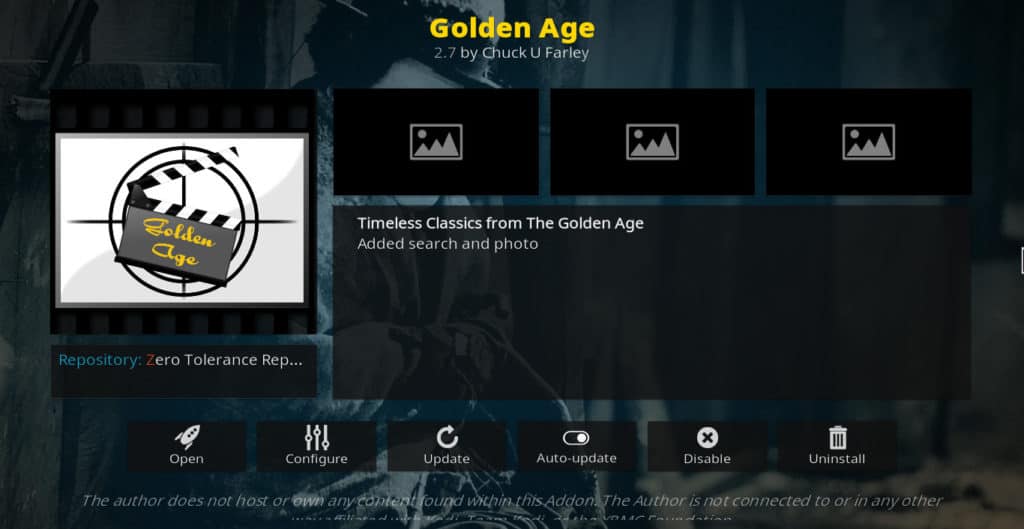 Another great alternative to stream free movies is the Golden Age Kodi addon. Golden Age gives you access to movies that are public domain, including some of the greatest from the golden age of film (1917 to early 1960’s). For example, you can use Golden Age Kodi addon to watch 12 Angry Men (1957), Les Miserables (1935), Great Expectations (1946), Metropolis (1927), and many others.

The Golden Age Kodi addon can be found in the Zero Tolerance repo.

We hope you’ve found this guide to the Joshua Kodi addon to be useful. If you’d like more info about how to get the best shows and movies through Kodi, check out some of our other Kodi guides, including how to watch WWE on Kodi, the best anime addons for Kodi, and how to change your Kodi skin.