How to watch The Curse of Oak Island season 8 online 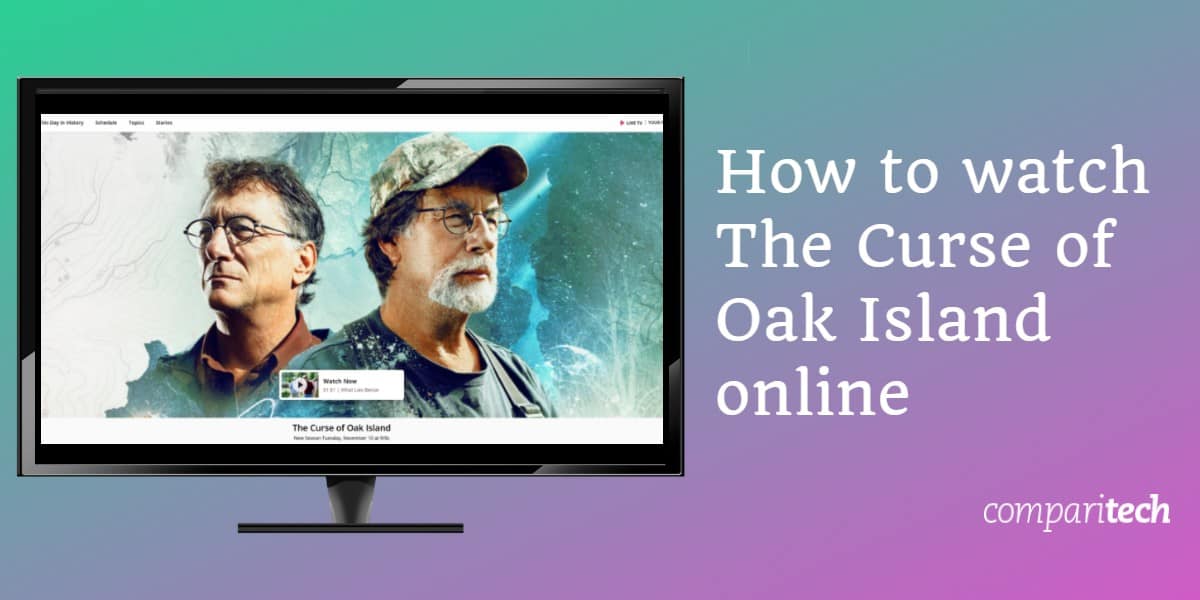 The eighth season of The Curse of Oak Island will premiere on November 10 at 9 PM EST (6 PM PST). There’ll be ten episodes in total, with one released each week until early next year. Below, we’ll let you know how to stream the new season both live and on-demand, so you won’t have to miss a second of the hunt. Not quite caught up yet? No problem: we’ll also explain how to stream older seasons of The Curse of Oak Island online.

It should be noted that we’ll only be recommending official sources. While there may well be third-party The Curse of Oak Island streams, these are often low quality, plus they can be taken down at a moment’s notice for copyright violation. With plenty of legitimate ways to watch, there’s really no need to resort to unreliable, unofficial streams.

The Curse of Oak Island season 8 will only be broadcast on region-locked streaming services. This means that if you’re traveling abroad and looking to watch on your usual platforms, you’ll have to use a Virtual Private Network (VPN).

Here’s the good news: it’s really quite simple to access geo-restricted shows like The Curse of Oak Island from abroad with the right VPN. Just follow the steps below.

Here’s how to watch The Curse of Oak Island Season 8 online from anywhere:

The Curse of Oak Island will be shown live, which is why we strongly recommend spending a few minutes making sure everything works as expected ahead of the premiere. This ensures you won’t miss the show due to last-minute technical problems. Remember: most major VPN providers offer 24/7 support to help with any issues you might encounter.

How to watch The Curse of Oak Island on US TV

Just like always, the new series of The Curse of Oak Island will premiere on History Channel. You’ll have to log in to watch anything other than a handful of specific TV shows. On the plus side, users can sign in with their cable provider details, or a fuboTV, Hulu, or Philo account.

If you don’t already have an account with one of these services, we’d recommend using Hulu, simply because it’s the least expensive option at $5.99 USD per month. Alternatively, you could just wait until mid-December, use Hulu’s month-long trial to stream the whole season, then cancel after the final episode airs to avoid being charged. The other services offer seven-day trials too, so you could hypothetically even reduce the wait by a couple of weeks if you wanted.

But what if you’d like to stream older seasons of The Curse of Oak Island? Well, you’re in luck: History Channel currently has every previous episode. You could also purchase season 1–7 individually on Amazon Prime Video, but this would be expensive and effectively pointless given that it’s available for less elsewhere.

All of the services mentioned above are geo-restricted, so you’ll need a VPN to access them outside of the US. Don’t have a VPN yet? ExpressVPN comes with a risk-free 30-day money-back guarantee; if you’re not blown away by it after trying it out, just cancel to receive a full refund, no questions asked.

Where else can I watch The Curse of Oak Island online?

The mysteries surrounding this tiny island off the coast of Nova Scotia have intrigued people from all over the world. Accordingly, The Curse of Oak Island is broadcast in several countries. Take a look below to find out which network is showing it where you are:

Canadian viewers can also watch the new series on the History Channel. However, it won’t begin airing until November 15, five days after the US premiere. There is a silver lining though: unlike the US version of the site, the Canadian version allows users to stream recently-aired episodes on-demand without signing in. As such, it’s possible to watch the entire season for free, provided you can wait an extra day each week. If you’d prefer to watch it live, you’ll have to sign in with your cable provider details, since no over-the-top services are supported.

History Channel Canada is geo-restricted. That said, it’s still possible to access it while traveling abroad if you connect to a Canadian VPN server.

Unfortunately, there’s no official date for when the eighth season of The Curse of Oak Island is coming to Australia. There are a few places where you can catch up on some of the older episodes, but at the moment, no major streaming service lets you watch the first two seasons on-demand.

SBS regularly shows reruns of this show, and these can be watched live or on-demand, free of charge. Better still, they’re kept available for several months after airing, so there’s no rush to finish them. Alternatively, fans can watch seasons 3–7 on Binge ($10 AUD per month after a two-week trial), or season 4 on Netflix Australia.

SBS, Binge, and Netflix are all region-locked. As such, you’ll need a VPN to watch The Curse of Oak Island on these platforms if you’re currently abroad.

What should we expect from season 8 of The Curse of Oak Island?

When a teaser trailer for a show has a member of the main cast utter the words “we found pirate treasure,” you know it’s going to be a good season. It also shows the team excavating, carrying out underwater searches, and planning their next movies. Apparently, their hard work pays off, as they allegedly find a Chinese coin dating all the way back to the 1100’s. Ultimately, people watch The Curse of Oak Island for the hunt, but it looks like this time around, Rick and Marty get closer to answers than they ever have before.