The Pyramid Kodi addon: is Pyramid legal? Is it safe to install? 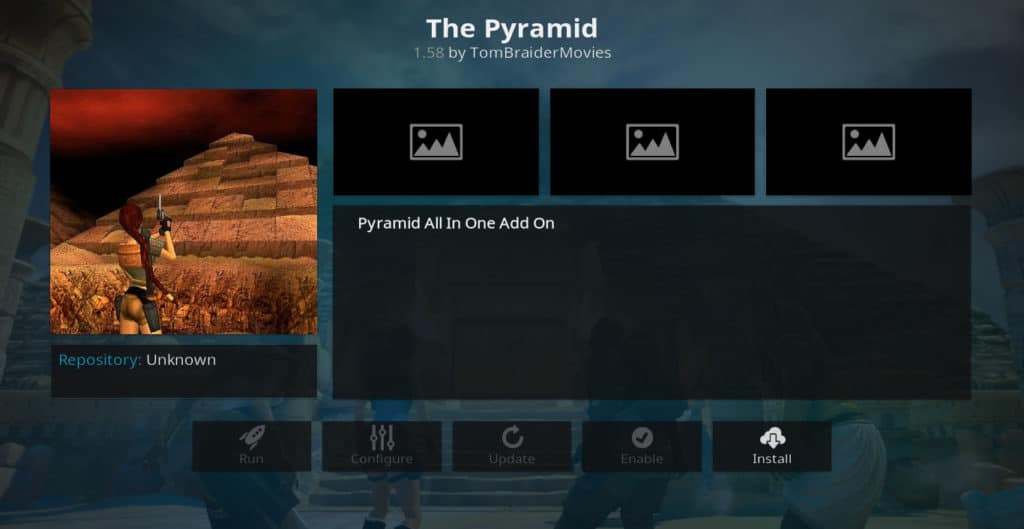 Looking to get the Pyramid Kodi addon installed? This guide takes a look at The Pyramid, what you’ll find in this addon, and some worthwhile Pyramid addon alternatives.

If you want to put an end to outrageous cable TV bills, the Kodi media player is a great tool to help you accomplish that. It will allow you to integrate most or all of your streaming services into one package and it can be installed on many different devices, including Roku, Apple TV, Amazon Fire Stick, PC, or Android phone.

Kodi even lets you stream home movies directly from your PC to many other devices, including a smart TV.

Unfortunately, though, it can sometimes be hard to find the right Kodi addon for the exact type of content you want.

This is especially true of children’s programs and documentaries. Most Kodi addons focus on finding movies or TV shows for adults, causing other types of content to often get overlooked.

Many Kodi users have turned to the Pyramid addon in order to deal with this problem. Pyramid is known specifically for being able to find popular documentaries, children’s television shows, UK entertainment, world webcams, and many other types of content that are underrepresented in other addons. It has become very popular because of this.

You might be wondering though. With all of this great content, is Pyramid safe? Is it legal?

Further down we will discuss what Pyramid is, how it works, and what risks a person is taking by using it.

How to use Kodi safely and privately.

While Kodi is an excellent program for streaming content, there are also some risks associated with using the media player. Many Kodi users stream content through third-party addons, and rely on Virtual Private Networks (VPNs) to stream privately. However, those who use Kodi for official and legitimate streaming can benefit from a VPN as well.

All Kodi addons–even official ones–are developed by independent programmers who may or may not be trustworthy. Any addon can be hijacked using Man-in-the-Middle  (MitM) attacks that can allow hackers to access your system and steal your information. Additionally, some Kodi addons have been hacked in the past against users’ wishes and knowledge.

Additionally, ISPs have been caught reducing the speed of customers who stream video. This can lead to pauses, buffering, grainy video and poor sound. The best way to deal with these two problems is to always use a VPN when streaming with Kodi.

A VPN reroutes your data through a secure network and encrypts your personal information to make sure that it doesn’t get into the hands of hackers. It also prevents your ISP from knowing what you are doing, taking the steam out of their speed throttling efforts and protecting your privacy. It can also stop Kodi buffering.

The most popular and most useful VPN service with Kodi users is IPVanish. IPVanish owns it own servers and infrastructure. This allows it to have faster speeds.  With streaming video, this is especially important because it prevents annoying buffering and grainy video. Although some speed loss will occur with VPNs, IPVanish has only a negligible impact on your bandwidth, making it a perfect solution for safe and secure online streaming. Importantly, IPVanish does not keep logs of their customers activity, unlike some VPNs. This is essential if using Kodi privately is a concern.

Reader deal: Comparitech readers can save 60% on their IPVanish subscription.

IPVanish works with all Kodi addons we have tested and works on all popular devices. It is also our favorite VPN for Firestick or Fire TV since there is a dedicated app and no complicated side-loading is required.

What is the Pyramid Kodi addon?

The  Pyramid Kodi addon was created by a group of developers who call themselves the “Tomb Raider Builds” group. This group was already known for having created a popular movie & TV addon called “Tomb Raider.”

Like Tomb Raider, Pyramid does not host any content itself. It simply uses search algorithms to find content the user is looking for on the web.

However, Pyramid is different from the group’s previous addon because it has improved search capability that focuses on finding underrepresented content. For example, Pyramid is known to be especially good at finding content from the following list.

In many cases, these types of content are hard to find using other addons, which is why Pyramid has gotten so popular.

But despite this popularity, there are some risks to using Pyramid that other Kodi addons do not carry.

The most obvious risk is caused by the fact that most or possibly all of the websites Pyramid streams from are not licensed to provide the programs they are making available. Pyramid  provides mostly pirated content, an illegal act in many countries.

In addition, Pyramid is a third-party addon that is not part of the official Kodi repository. This means that it hasn’t gone through the strict vetting process official Kodi addons have to go through. This means Pyramid may be more vulnerable to hacking when compared to other addons that provide similar content.

Alternatives to the Pyramid addon.

The following addons provide many of the same types of content that Pyramid does but only from sources that are licensed by the copyright-holders. These addons are all found in the official Kodi repository.

For U.K. entertainment, no addon can compete with BBC iPlayer. Whether you want to watch popular shows like Doctor Who, Atlantis, Broadchurch, or live concerts and BBC Earth documentaries, iPlayer has all of it. If it can be watched on BBC, it can be watched on iPlayer.

If you live in the U.K., an annual license to watch BBC programs costs £149. That’s still a lot cheaper than cable TV.

PlayOn is a DVR service that allows you to record online shows and movies from Hulu, Netflix, Amazon, HBO Now, and many other streaming channels.In order to use PlayOn, you need a subscription to one of these channels. You also need $30/year for PlayOn itself.

The PlayOn addon can be used to play these DVR recordings or to stream content directly from Netflix, HBO Now, etc.

The ability to record content is especially useful with services like Netflix whose catalog changes frequently. If a particular movie or documentary is about to no longer be available on one of your streaming services, PlayOn will often alert you to this fact through email so that you can record it before it leaves the catalog.

For users interested in content for children, Netflix, HBO Now, and Amazon Prime Video all have extensive collections. And they have plenty of documentaries as well. 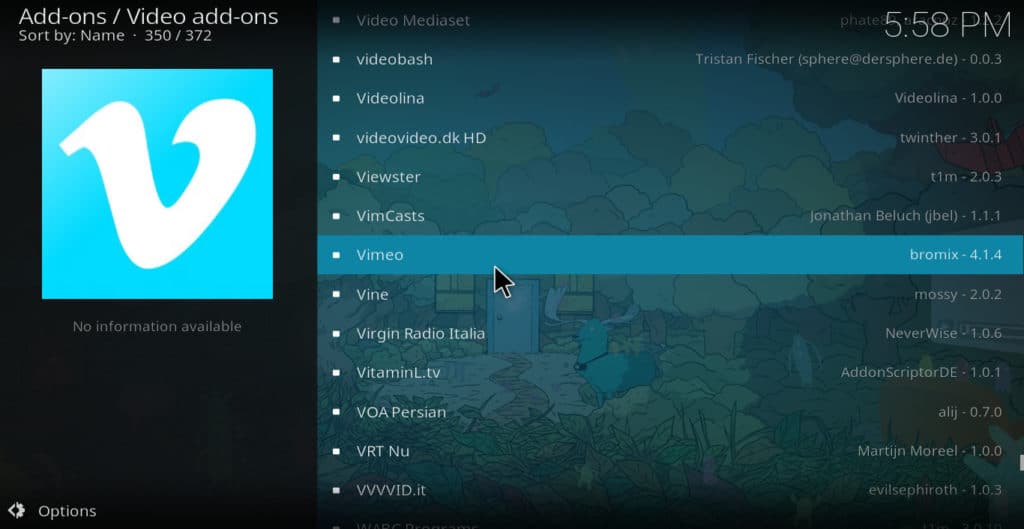 Vimeo is a video sharing service similar to Youtube. But instead of running ads, Vimeo charges companies a small monthly fee to host videos on its platform.

Because of the added cost to producers, Vimeo tends to attract more high-quality content when compared to Youtube. It has a wide selection of documentaries, short films, animation, and music videos.

The Vimeo Kodi addon gives you access to all of the content on the site. And not only is there no charge for the service, it’s also commercial free.

The Pyramid Kodi addon provides a lot of content, especially the kind that tends to be underrepresented in other addons. There’s no question about that.

However,  it is especially vulnerable to being turned into malware because there is no way of knowing where to find an authentic copy. In the past, the Tomb Raiders Build group had a Facebook page that it used to keep up with fans of the addon, but that page has now been deleted. There is also no longer any official website where the developers can be found.

Instead, it seems that the creators of the addon have dropped out of sight while the addon itself has moved from one repository to another, housed on different urls.

While the Pyramid Kodi addon does allow a person to view plenty of entertaining and useful streaming content, there are definitely better ways to accomplish the same purpose.

Other piracy focused addons to be avoided:

Guides to finding safe and legal Kodi addons and builds:

Sticking to official Kodi addons and following these guides will help to keep you clear of addons which could compromise your security or result in legal issues through accessing pirated content.