How to watch the Democratic presidential debate 2020 live online

Want to make sure you don’t miss this important debate? We reveal how to live stream the Democratic presidential debate 2020 from abroad using a VPN.
Aimee O'Driscoll 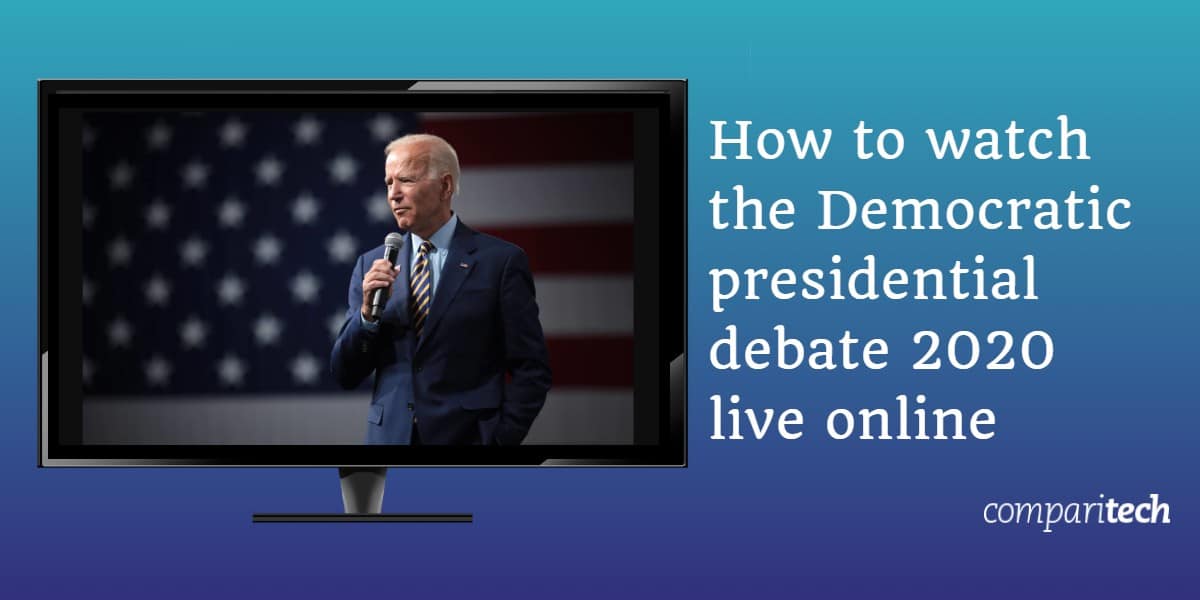 Altogether, 12 Democratic Party presidential debates are scheduled. Six took place in 2019 and one in January 2020. The next debate is set to take place on February 7, 2020 at 8 pm EST (7 pm CT, 5 pm PT) at St. Anselm College in Manchester, New Hampshire. Of course, with the major Democratic Party candidates having the opportunity to voice their opinion on important topics, this debate is not one to miss. Not going to be in the US on this date? Not to worry. We’ll reveal how to live stream the Democratic debate from abroad with a VPN.

Note that we’ll only recommend official streams as unlicensed broadcasts tend to be low quality and can be taken down partway through the event. However, many official streams are region-locked and only accessible in certain regions. As such, you’ll need to use a VPN to watch your normal services while traveling abroad.

Channels like ABC and Univision restrict their online content by only making it available in certain countries. They deduce a user’s whereabouts using their IP address. A Virtual Private Network (VPN) is a handy tool as it can switch your real IP address with one from a country of your choice, enabling you to evade geographic restrictions and watch your usual content. It does this by routing your traffic through a secondary server in a location that you choose.

It might sound a bit complex, but it’s actually simple to use a VPN. Just follow the steps below.

Here’s how to watch the Democratic presidential debate live online, free from anywhere:

While everything should go smoothly, there’s a chance you may run into common VPN problems. As such, it’s a good idea to test the stream in advance. That way, if you do run into issues, you’ll have time to contact your VPN provider to troubleshoot.

In the US, this debate will air exclusively on ABC. Some of ABC’s main content is available for anyone in the US, but for other content (including some live streams), you need to subscribe to ABC as part of your cable package. If it is part of your bundle, you can tune in on TV or go to ABC.com and use your cable provider credentials to access the live stream. If you happen to be on the go while the debate is being broadcast, you can access the stream using the ABC mobile app.

Don’t have ABC as part of your plan? Not to worry as the debate will also be shown on the ABC News Live stream which is available to anyone in the US with no account required. In addition, ABC is available via some over-the-top streaming services, including YouTube TV, Hulu with Live TV, and AT&T TV Now.

Want Spanish-language coverage? This will be provided by Univision. To access a Univision live stream, you will need to sign in with your cable provider credentials.

All of the services we’ve mentioned above are region locked and only available to viewers within the US. If you’re traveling abroad and wish to access these services, you can connect to a VPN to obtain a US IP address. Don’t have a VPN yet? ExpressVPN is great for streaming and comes with a 30-day money-back guarantee, no questions asked. This means you can use it to live stream the democratic debate and cancel for a full refund if you don’t wish to keep the service.

Is the debate being broadcast anywhere else?

At time of writing, no broadcasters are slated to air the Democratic Party presidential debate outside the US.

This means that if you’re traveling outside the country, your only option is a VPN. That said, local news and other sites will no doubt be able to provide you highlights shortly after the debate airs.

22 candidates are officially in the running to become the Democratic Party nominee, but they can’t all take part in this debate. The following candidates are set to take the stage:

This is the first debate to take place after primary voting begins at the Iowa caucuses, held on February 3. New rules for qualifying open an additional pathway for candidates to earn a spot in the debate lineup. If a candidate is awarded one or more pledged delegates based on the Iowa caucus results, that candidate will be allowed to participate in the debate.

This qualification method is in addition to the other possible routes of qualifying by meeting polling and grassroots funding thresholds.

After this debate, four more remain. Two will take place this month on February 19 and February 25. The final two are slated for March and April with exact dates yet to be announced.