How to watch Endeavour Season 7 online from anywhere 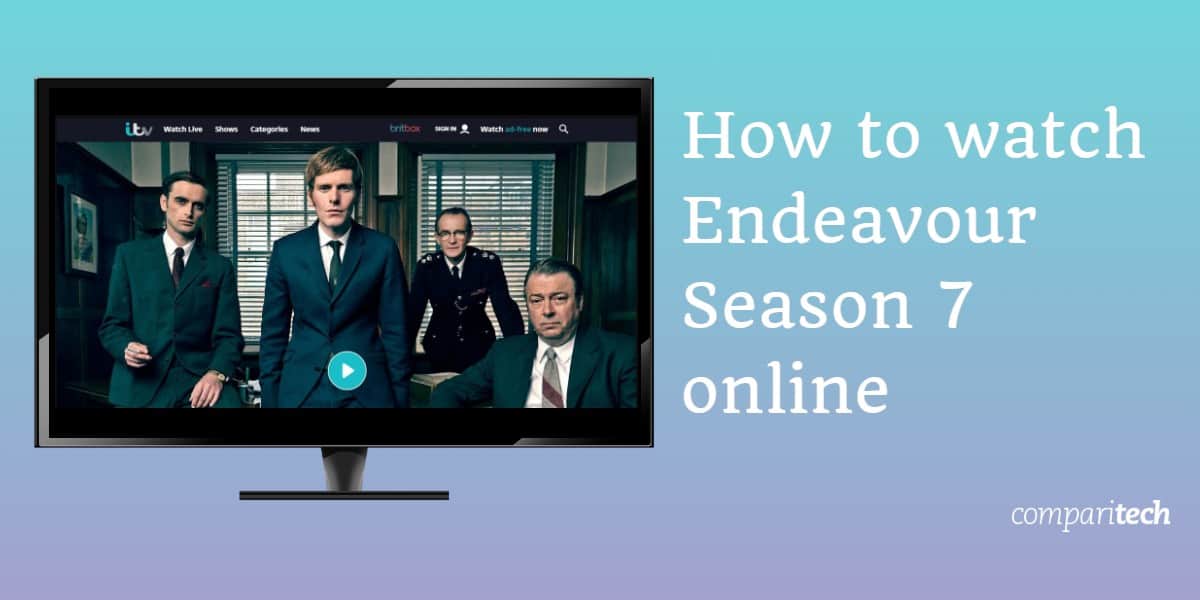 Endeavour season seven will premiere in the UK at 8 PM GMT (3 PM EST / 12 PM PST) on February 9. Unfortunately, fans in other countries have a bit more of a wait, but don’t worry; below, we’ll explain how to live stream every episode of Endeavour from anywhere, even abroad.

You should note that this post will only recommend official sources. Popular shows like Endeavour are often available on shady streaming sites but we strongly advise against using these. The videos on such sites are often laggy and low-resolution, plus they can be taken down for copyright violation at any moment, meaning you might not even get to see the end of the series. You can watch Endeavour online for free anyway, so there’s nothing to gain by using unreliable, unauthorized sources.

All of the services showing Endeavour are region-locked. As a result, you’ll need a VPN to access your usual streaming platforms when traveling abroad.

How to watch Endeavour season 7 abroad with a VPN

Unblock geo-restricted streaming services is easy, even if you’ve never used a VPN before. Just follow the steps below to stream Endeavour abroad.

Here’s how to watch Endeavour season 7 online from anywhere:

Endeavour season seven will be broadcast live, so it’s important to make sure your VPN works (using the steps above) well before the show is due to begin. This way, if anything doesn’t work as expected, you’ll have enough time to get help from your VPN’s customer support team and might not have to miss the beginning of the premiere.

How to stream Endeavour for free on UK TV (limited time)

British viewers can stream the entire seventh season of Endeavour for free on the ITV Hub. It’s important to note that episodes expire 30 days after they’re shown on TV, though, and it’s as yet unclear how you’ll be able to watch once this happens.

You’ll also have to create an account before you can actually use this service. Doing so is fairly straightforward, although you will be asked to enter a British postal code. This isn’t used to determine your location, and any valid UK postal code will work. Note that while Scottish users will be redirected to STV Player, Endeavour isn’t actually available on this platform.

Looking to watch older episodes? Although Endeavour is available on Amazon Prime Video, each episode costs £2.99 and season two is unavailable. However, iTunes currently allows you to purchase previous seasons for £8.99 each or £29.99 for the complete collection.

ITV Hub is only accessible in England and Wales. If you’re in Scotland or traveling abroad, you can still watch Endeavour by connecting to an English VPN server. Don’t have a VPN yet? ExpressVPN comes with a 30-day money-back guarantee meaning you can stream the entire seventh season risk-free. Afterward, if you’re unsatisfied or don’t need a VPN anymore, you can simply cancel and claim a full refund.

Where else can I stream Endeavour season 7 online?

Outside of the UK? No problem — below, we’ll explain which broadcasters are showing Endeavour season 7 in other countries:

In America, Endeavour will air exclusively on PBS. Unfortunately, there’s no confirmed release date yet; all we know is that season 7 is coming to the US sometime in 2020.

While PBS is a free-to-watch network, Endeavour is only available online to Masterpiece subscribers. This costs $5 USD per month, and you’ll need a credit card that’s linked to a US address in order to sign up. It’s worth noting that Masterpiece doesn’t allow you to watch live TV, but new episodes will be made available on-demand shortly after they finish airing on TV.

You could also add the Masterpiece addon to your Amazon Prime Video subscription. This method is slightly more expensive ($5.99 per month) but comes with a one-week free trial. Better still, Amazon Prime Video’s US library currently includes every previous season of Endeavour, meaning it’s easy to catch up if you’ve missed a few episodes.

PBS Masterpiece is only available in the US. Existing subscribers can access this service from other countries by connecting to one of their VPN’s American servers, however.

While there’s no confirmed Australian broadcaster as yet, previously it was ABC, and in fact, this network is currently airing season six again. ABC is completely free to watch and you don’t even have to create an account. Additionally, its content is made available on-demand a short time after broadcast.

On the other hand, watching seasons 1–6 online is more difficult in Australia. Currently, Endeavour isn’t available on any major Australian streaming service, which means your only option is to purchase past seasons individually on iTunes. Prices vary by season, but generally, you can expect to pay around $15.99 AUD.

ABC is geo-restricted, so you’ll have to either be in Australia or using an Australian VPN server to watch anything.

What can we expect from season 7?

First of all, this season will be shorter than in previous years, with just three episodes. Additionally, Joan won’t be returning as her actress, Sara Vickers, recently had a child. So what does this mean for our favorite detective?

Series writer Russell Lewis has hinted that Morse will be thrown into an unfamiliar age in season seven, one where industrialization and globalization collide with the idea of small-town living. With just a handful of episodes remaining, Endeavour season 7 likely won’t pose any major new mysteries, but it should serve as a fitting end to the beginning of Morse’s story.