Kodi Bennu Addon: Is it safe? What are the alternatives?

Ian Garland Streaming, Kodi and VPN Expert
Are you thinking of installing the Kodi Benuu addon? We will walk you through what it is, if it is safe to use and if there are better alternatives.
Update, November 21, 2017: Read why Kodi Bennu is not working and can not be installed.

The popular third-party add-on Phoenix shut down in June, causing many of Kodi’s users to think that the writing was on the wall for the popular media player as well. Just two months later, however, Phoenix has been revived and renamed “Bennu” after the Egyptian deity of rebirth. It’s poetic, but is this updated add-on safe and legal to use?

In this guide, we’ll be providing an overview of what Bennu is and how it works. No Kodi add-on is impervious to attack, regardless of whether you’re running it on an Amazon Fire TV, Roku, iPhone, iPad, Apple TV, USB flash drive, Windows, Mac, Android TV box or another streaming device. As a third-party add-on, Bennu comes with some significant privacy concerns for every device. We’ll also be covering the risks that come with using any Kodi add-on, official or otherwise.

With all of the media attention that streaming services and Kodi, in particular, have been receiving in recent months, it is imperative that you understand your country’s laws regarding streaming content online. Some countries like India won’t punish you for watching unofficial content, but in other places, the law is a lot more complicated and as such, knowing it will help you minimize the risk of getting into trouble.

Bennu, like Phoenix before it, is a third-party add-on. This means that it likely wasn’t subject to the rigorous vetting and testing process that its official rivals were. While no Kodi add-on is impervious to hijacking, third-party add-ons potentially have more vulnerabilities for a malicious third party to take advantage of.

In fact, there’s a chance your own ISP is monitoring your activities. In the past, several internet service providers have been accused of slowing down their customers’ networks to put pressure on streaming services like Netflix. You, the customer, run the risk of being punished for completely legal activities and political matters which are outside of your control. At the very least Kodi users may face buffering problems.

There is a way you can stop this, however. If you use a virtual private network (VPN) to connect to the internet, all of the traffic coming and going from your computer is encrypted and useless to anyone looking at it from the outside. Additionally, a VPN allows you to prevent man-in-the-middle attacks where a hacker intercepts your communications with the aim of stealing your data.

Some content hosters use geo-locking to control who can view their content. With a VPN, changing your location is as simple as connecting to a different server, which allows you to watch region-locked media regardless of your physical location.

There are free VPN services out there, but we don’t recommend using them. There’s no way of knowing that your data is any safer with them than with your ISP, and several of them contain adware or malware. Instead, we recommend IPVanish. It’s an inexpensive service which doesn’t log your activities or noticeably impact your network speeds. As an added bonus, you can even install it on a Fire Stick or Fire TV.

Reader deal: You can save 60% on an IPVanish annual plan here. It’s one of the few VPNs fast enough to work well with Kodi, is easy to install on all popular devices including Amazon Fire TV and TV Stick and keeps no log files so your activity is truly private.

What is the Bennu Kodi add-on? 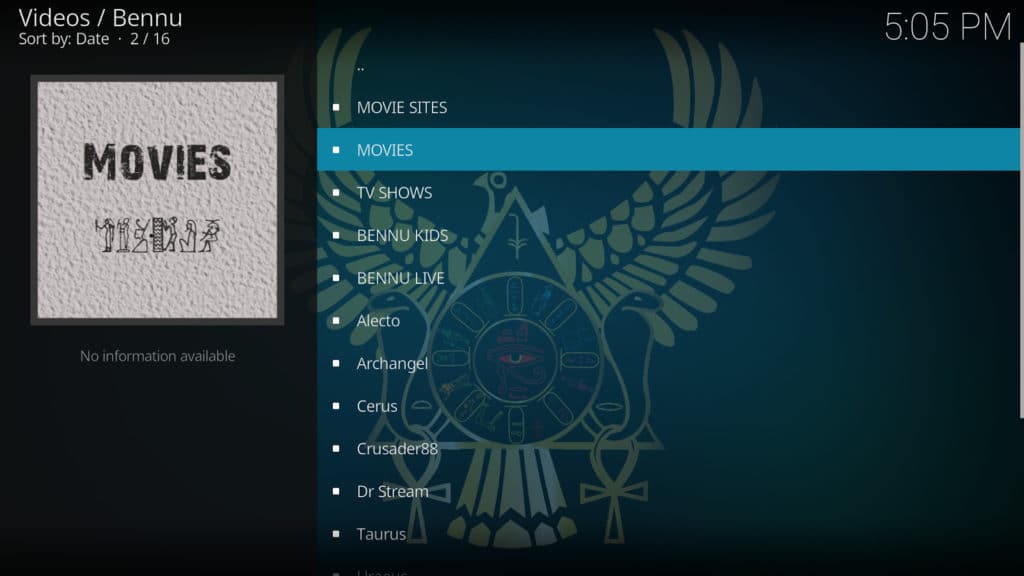 Bennu is a new iteration of the popular third-party Kodi add-on Phoenix. It aggregates links from several different content hosts and delivers these to the user to make it easier to find what they’re looking for.

The problem with Bennu is that most of the content it provides access to is unlicensed. It does provide links to some official live TV channels which are legal to watch for anyone due to a lack of licensing requirements, however, these represent just an exceedingly small portion of what is available.

Also, despite the large amount of content made available through Bennu, there’s no way to search for anything specific. Its whole menu system is very disorganized and there is no way to search only for the legitimate content. Although there is a small amount of public domain content (such as the 1925 version of The Phantom of the Opera), it is dwarfed by the sheer amount of pirated material and hidden several menus deep.

It is also worth considering the reason why Phoenix went offline in the first place. Its original creators took it down in the face of a lawsuit which targeted them as well as the creators of several similar add-ons. There’s no guarantee that Bennu will remain available for any length of time, and that alone should be enough to prevent us from recommending this add-on.

For the reasons above, we do not recommend that Kodi users install or stream content with Bennu.

Alternatives to the Bennu Kodi add-on

Bennu may provide access to a decent range of content, but there’s very little of it which is official and legitimate. Whether you’re looking for high-quality TV streams, movies, or music, there are add-ons available which are better suited to you than Bennu is. 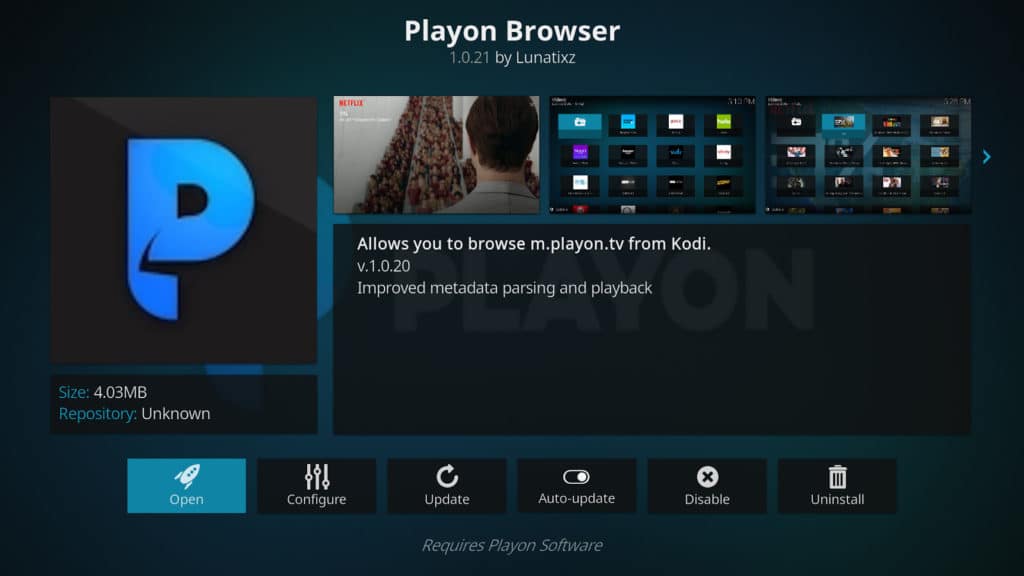 The PlayOn Browser is an official add-on for Kodi which allows you to watch content from all of your online streaming services in one place. To begin, you’ll need a PlayOn account, (which you can sign up for at https://www.playon.tv/). You can stream content from your media library with a free PlayOn account, but to watch or record content from one of their supported streaming services like Netflix, Hulu, or HBO Now, you’ll need to upgrade your account, which costs $1.50 a month.

PlayOn Browser is an excellent official add-on for one specific reason: there’s no official Netflix or Amazon Prime Video add-on, and this provides a way to watch their content legally through Kodi without installing any potentially insecure third-party add-ons.

PlayOn Browser can be found in the official Kodi repository. 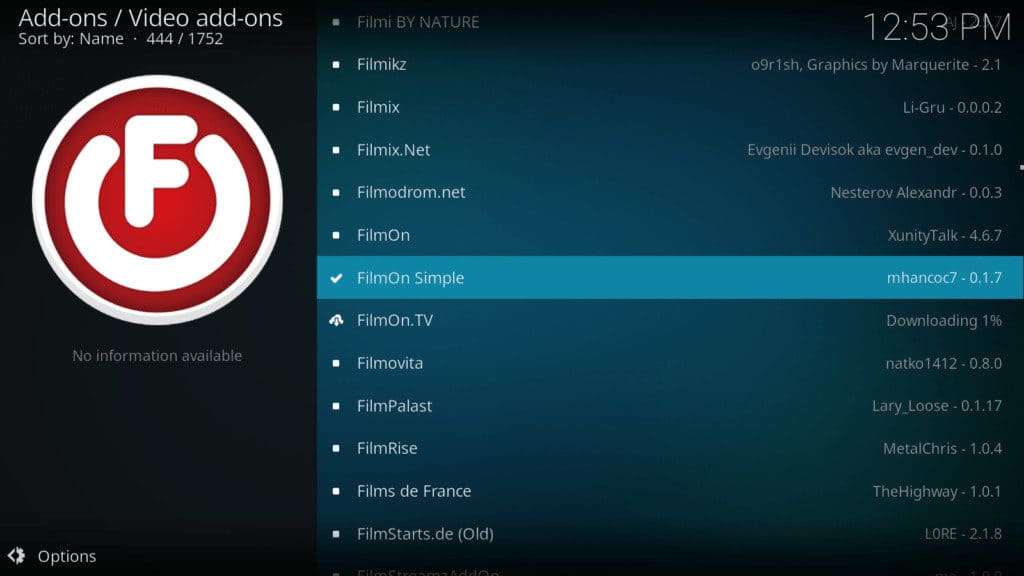 If live TV streaming is something that interests you then look no further than the FilmOn.TV add-on for Kodi. It essentially takes the streams from the website www.filmon.tv and allows you to watch them through Kodi, assuming you have a FilmOn subscription.

This costs a little under $20 per month and grants you access to both live TV and pre-recorded content from around the world. The content is neatly grouped by category and country, which means that you don’t have to scroll through several pages of Russian TV shows to find the one you want to watch.

The best thing about FilmOn.TV is that it’s completely legitimate.

FilmOn.TV can be found in the SuperRepo repository. 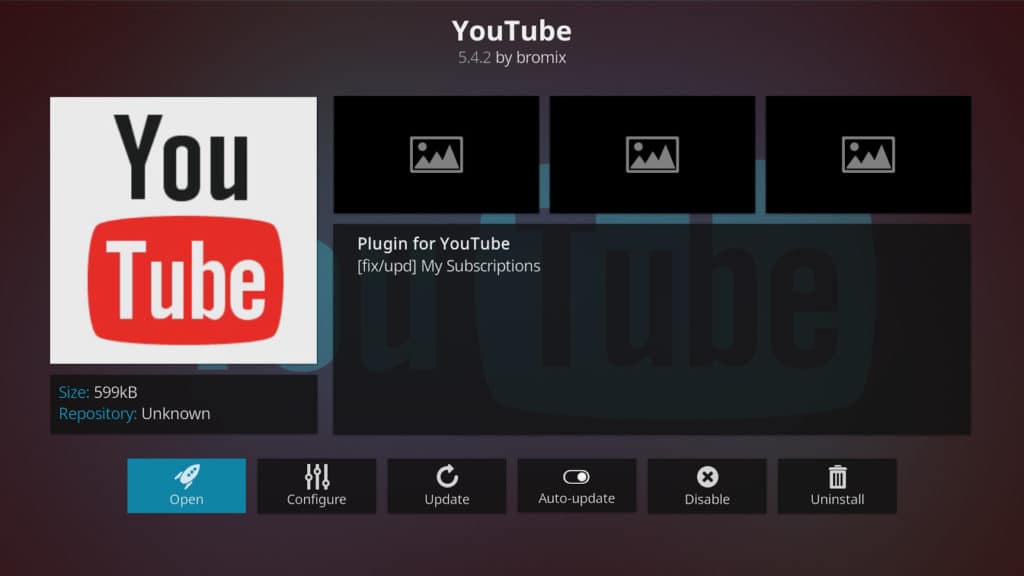 Believe it or not, one of the best Kodi add-ons for video content is YouTube. Contrary to popular belief it offers far more than just cat videos. There’s years worth of content: every possible topic from DIY tutorials to E-Sports is covered, and new videos are added in their thousands every single day. The wide range of legal content alone makes it a superior add-on to Bennu, but there are other reasons to try it out as well.

As you use YouTube, it considers the kind of videos you watch and recommends others that you might like. Given the sheer amount of content on offer, you’ll never be short of something to watch, and the recommendations feature makes it great for those times when you don’t know what you’re in the mood for.

YouTube also provides an easy and legal way to rent or purchase movies. The vast majority of the time, you’ll be able to find clips or trailers for the film you’re looking for too, which makes it easier to decide if you really want to watch it or not.

The YouTube add-on can be found in the official Kodi add-on repository.

Phoenix was a very popular add-on in its time, and Bennu clearly hopes that its content library will help make it as successful as its predecessor. However, one thing that both of these add-ons have in common is that most of the content they link to is pirated. With no real way of distinguishing the legitimate content from the rest, Bennu puts the user at risk by asking them to find it themselves.

It’s also a third-party add-on, and while even official add-ons can be hijacked, a third-party one is likely to have more vulnerabilities due to the smaller development teams and lack of resources that the teams have. If this happens, there’s very little that can be done to stop a hacker from stealing your data or running malicious code on your computer. In fact, there’s a good chance you wouldn’t know anything was wrong until it was too late. This lower risk of attack is one of the reasons we advocate using official add-ons as much as possible.

Yes, Bennu provides access to a wide range of content, but given that it could be taken offline by a legal challenge at any time, it’s far from reliable. Regardless of what kind of media you’re looking for, there are better, safer, more reliable, and most importantly, clearly legal alternatives out there.

Popular: How to watch Mayweather vs McGregor online.