The best Stremio addons for 2022

Trying to find the best addons for Stremio? In this article, we’ll be highlighting the best Stremio addons. We’ll explain why these come so highly recommended and also suggesting some addons to avoid.

Stremio has a very limited selection of addons to choose from. This may seem like a disadvantage but it can actually be a blessing in disguise. New Kodi addons, for example, are often released, updated, or relocated on a weekly basis. There’s often very little information available about new releases, especially following the most recent takedowns of popular addons and their developers. Stremio mostly offers official addons for well-established, well-documented streaming platforms.

However, Stremio makes the mistake of including potentially dangerous peer-to-peer (P2P) addons alongside its harmless ones. This guide will explain which of Stremio’s addons are safe to use and why you should choose them. We’ll also be showing you how to install these addons and explain some of the risks that come with third-party addons.

The vast majority of Stremio’s addons offer officially licensed content but there are some that don’t. We suggest our readers use official sources and research their country’s streaming laws before attempting to use Stremio for this purpose.

Some people connect to virtual private networks (VPNs) to hide unlicensed streaming from their internet service provider (ISP). That said, there are many legitimate uses for VPN software. Most people could benefit from a VPN, even if they only stream content from official sources.

VPNs encrypt the user’s network traffic, making it unreadable to any outside observers. This includes hackers trying to use a Man-in-the-Middle attack but also your own ISP. A VPN prevents your ISP from selling your data or using your browsing habits to justify throttling your network speeds.

Choosing the right VPN is crucial. Some slow your connection to a crawl while others may include malicious programs. Some VPN providers even keep detailed logs of your traffic, greatly reducing your online anonymity.

We recommend IPVanish. Unlike most other VPN providers, IPVanish builds and maintains its own servers, allowing it to quickly resolve network problems. This also ensures IPVanish has minimal impact on your internet speeds. Finally, it’s one of the most portable VPNs, with dedicated Android, iOS, and Amazon Firestick apps. 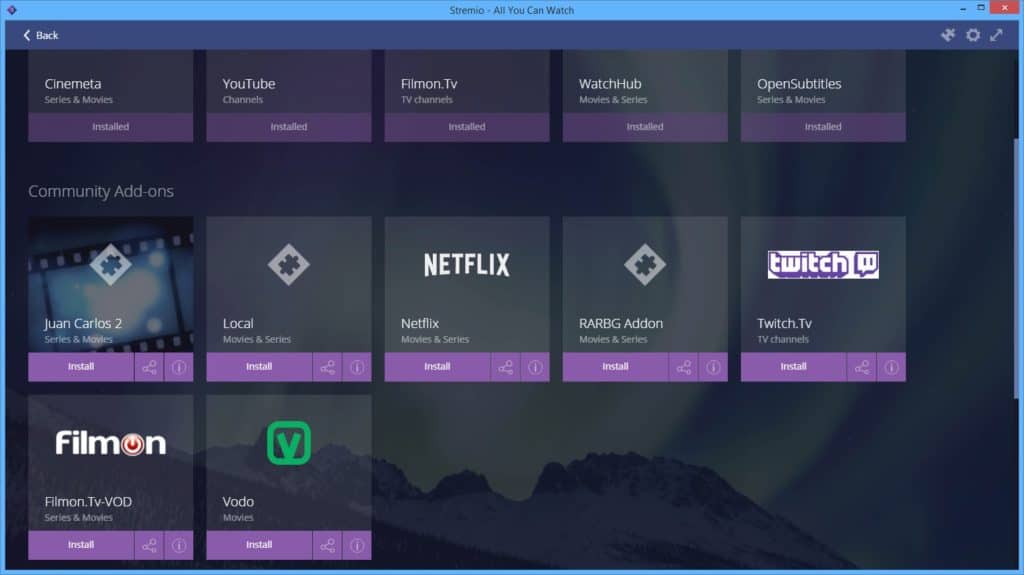 Stremio is a very simple media center platform. While rivals like Kodi or Plex offer deeply customizable experiences, Stremio aims to be as easy to use as possible. This means that Stremio has fewer configurable options but ensures that you don’t have to be good with computers to install it.

There’s another fundamental difference in the way that Stremio works. With Kodi, addons are installed directly on the user’s computer. If an addon is compromised by an attacker, malware can be installed the next time the addon is updated. Stremio, however, does not technically “install” addons. Instead, it merely allows an addon’s code to run on a web server. This improves security since addons have no access to a user’s computer but it also makes new addons easier to create.

Despite its simplicity, Stremio includes several features that Kodi doesn’t. For instance, it comes with a fairly robust calendar system that lets you know when certain shows are airing. It can also tell the user where to purchase titles that aren’t available for free.

The following addons are the best that Stremio has to offer. These all provide properly licensed content from official sources and can be used without any risk whatsoever. Installing addons is very simple: simply click the jigsaw piece icon in the top-right, find the addon you want and click Install.

YouTube is the world’s largest streaming platform so it’s no surprise to see it on Stremio. YouTube has changed a lot in recent years; it’s no longer just for watching viral videos. There are millions of hours of content covering every imaginable topic. YouTube has everything from film criticism to coding tutorials with new content added almost every second.

There are some limitations, however. For instance, the YouTube addon doesn’t display live streaming content or allow the user to comment on videos. it does, however, allow the user to watch directly from within Stremio instead of redirecting them to the website as with other sources.

If you’re into eSports, you probably already know about Twitch. It’s the home of competitive gaming but has recently branched into other types of content too. Major gaming events like E3 and the Overwatch World Cup are streamed live on Twitch, so if you’re looking to catch the latest developments in the gaming world, this platform is almost a necessity.

Unlike with the YouTube addon, Stremio’s Twitch addon allows the user to watch both on-demand and live content. Videos can be watched from within Stremio itself and no login is required.

Netflix is one of the best streaming platforms available and unlike Kodi, Stremio has an official addon for it. You can browse Netflix’s content for free but you will need still need a subscription.. Also, the user is redirected to the Netflix site once a title has been selected so you don’t have to trust Stremio with your login information.

There is a very small problem with the Netflix addon. When the user searches for a particular film, it may be displayed even if Netflix hasn’t made it available in the user’s region. This can be frustrating, especially given Netflix’s habit of preventing VPN region spoofing. However, most users can still access thousands of movies and the service’s award-winning original content.

The Vodo addon offers a small selection of indie movies addressing topics like surveillance and horror. Interestingly, the content available via the Stremio addon represents just a tiny portion of what’s freely available on the website. There aren’t any blockbuster titles available but if you’re interested in niche independent films, you may find Vodo’s library of content to your tastes.

Stremio has several addons that allow most users to easily find interesting, high-quality content from official sources. However, there are a few that show up in the community addons list that we do not recommend installing.

There are actually two FilmOn.TV addons for Stremio, FilmOn.TV and FilmOn.TV-VOD. These are actually entirely legal to use and we’ve recommend the Kodi addons many times in the past. However, since June, the Stremio versions of FilmOn no longer work. Stremio still displays results from these addons, but none of them actually play.

RARBG is a site that hosts torrents, similar to The Pirate Bay. While torrenting is not inherently illegal, this type of site is notorious for allowing users to download copyrighted content. Also, because of the nature of P2P networks, when you use this addon to download movies you’re also allowing someone else to download it from you. During this process, your IP address can be seen by anyone that cares to look.

To minimize risk to yourself and your system, we do not recommend installing the RARBG addon.

Juan Carlos 2 is another addon that allows users to add torrent links from a variety of unofficial sources. It shares the same risks as the RARBG addon and Stremio users would be better served by one of the official addons listed above. These official addons allow you to support the people that made your favorite content available in the first place, increasing the likelihood that similar videos will be produced in the future.

While not available directly from Stremio’s addons page, Popcorn Time is a popular addon. There are two major problems with it, though. First, Popcorn Time has had a colorful legal history due to its emphasis on copyright-infringing content. By using this addon, you are depriving content creators of the funds that they need to continue working.

Second, the Popcorn Time addon for Stremio isn’t hosted on an website and must be locally hosted on the user’s system.This requires an in-depth understanding of frameworks like Node.js, without which the user opens themselves up to malicious scripts created by users from untrustworthy forums.

Stremio prioritizes ease of use above all else. With just a single click, it allows users to access some of the biggest official video libraries in the world.There’s no need to use the few third-party addons because of the sheer range of legitimate content on offer.

When you consider how easy it is to install and how advanced some of its features are, it becomes clear that Stremio has a lot of potential. If you don’t have the time or energy to spend configuring every last aspect of your home theater setup, Stremio may be exactly what you need.