How to install VPN on Android TV box or Kodi Box

Want to install a VPN on your Android TV or Kodi box? We'll explain how to use a VPN on these platforms and suggest some of the best VPNs to use.
Ian Garland Streaming, Kodi and VPN Expert 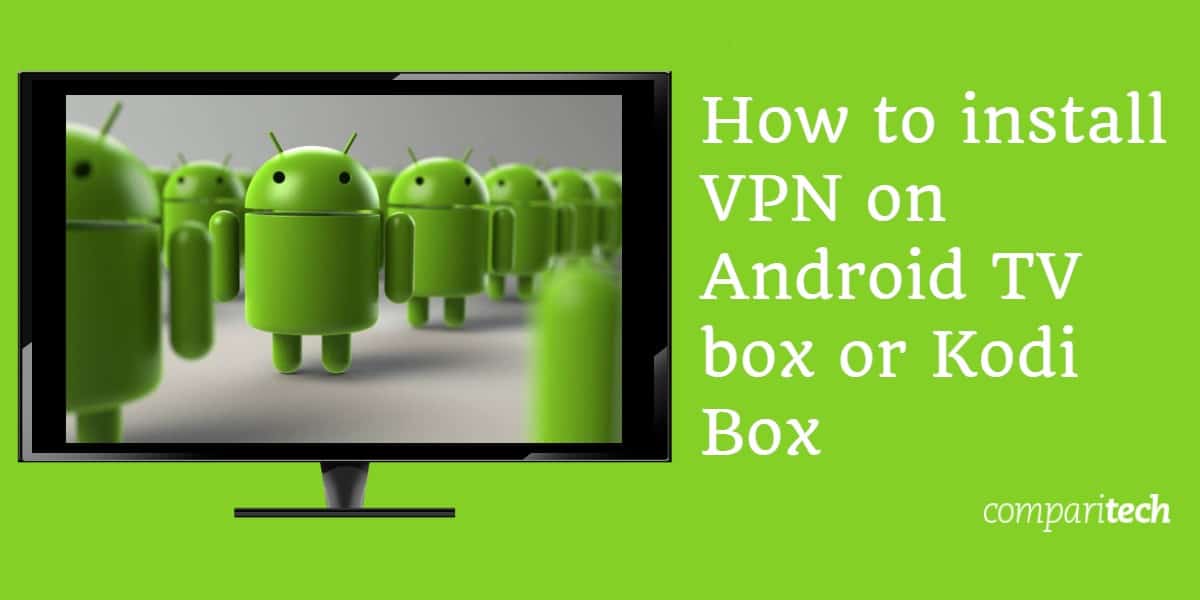 If you’re looking to set up a home media center, two of your main options are Android TV and Kodi. However, while the software is relatively simple to set up, neither automatically keeps your viewing habits private. Today, we’ll show you how to install a Virtual Private Network (VPN) on your Android TV or Kodi box so you can stream you favorite shows safely.

With the negative press attention Kodi, and indeed most unorthodox streaming devices have been receiving recently, many people assume that the software isn’t legal to use. The truth is that while Kodi and Android TV boxes are completely legal, some third-party plugins provide unrestricted access to licensed content. We encourage our readers to study their country’s laws on streaming before attempting to use Kodi or Android TV boxes.

Not every VPN is created equal. Some use stronger encryption than others, some keep no logs of your internet traffic history, and some pride themselves on their high network speeds.

We don’t recommend using a free VPN. Some have been known to use shady methods of making money, from selling your data to third parties or worse, selling your bandwidth and potentially implicating you in cyberattacks. In the past, several popular free VPNs on the Google Play store have been found to contain malware, so we recommend you thoroughly research a VPN before you install it.

There are a few Kodi addons that let you install a VPN directly. However, these come with several problems of their own. First, they only protect you within Kodi and won’t anonymize traffic from any other apps. Secondly, these require you to install additional software that may not be easily available on Android. Finally, you’d be at the mercy of the developer: the addon could contain malware or simply be abandoned, either of which would leave you vulnerable.

We recommend IPVanish. It’s an inexpensive VPN that works with every Kodi addon we’ve ever tested, plus it comes with its own Android app. It’s also has a dedicated app for Amazon Firestick and Fire TVs, so it’s one of the easiest to install on Android devices.

Unlike most VPN services, IPVanish owns its servers outright. This allows it to provide the consistently high speeds you’ll need to enjoy streaming on Kodi or Android TV. IPVanish also values its customers’ privacy very highly and doesn’t keep logs of your browsing history.

FAST, SECURE STREAMING:IPVanish is a fast, security-conscious VPN with over 1,600 servers in 60+ countries. It keeps no logs, has good unblocking ability, and allows any number of simultaneous connections. There’s also a 30-day money-back guarantee so you can try it risk-free.

There’s currently no simple and effective way to install a VPN directly from within Kodi. However, it’s actually quite easy to keep your device protected. We’ve covered some of the best VPNs for Kodi in 2021 and are quite sure one of those will meet your needs.

Not sure where to start with Kodi? Check out our guides to install Kodi on USB flash drive, iPhone, Roku, Apple TV, Nvidia Shield, and Amazon Firestick.

Once you have signed up for a VPN service, installing it is simple. Begin by going to the app store on your Android TV or Kodi box. Most major providers are present in the Google Play and Amazon stores. If yours isn’t, you may have to use an app like Downloader to sideload the .APK file from your provider’s website. Search for your VPN, make sure any results are legitimate, then install it. 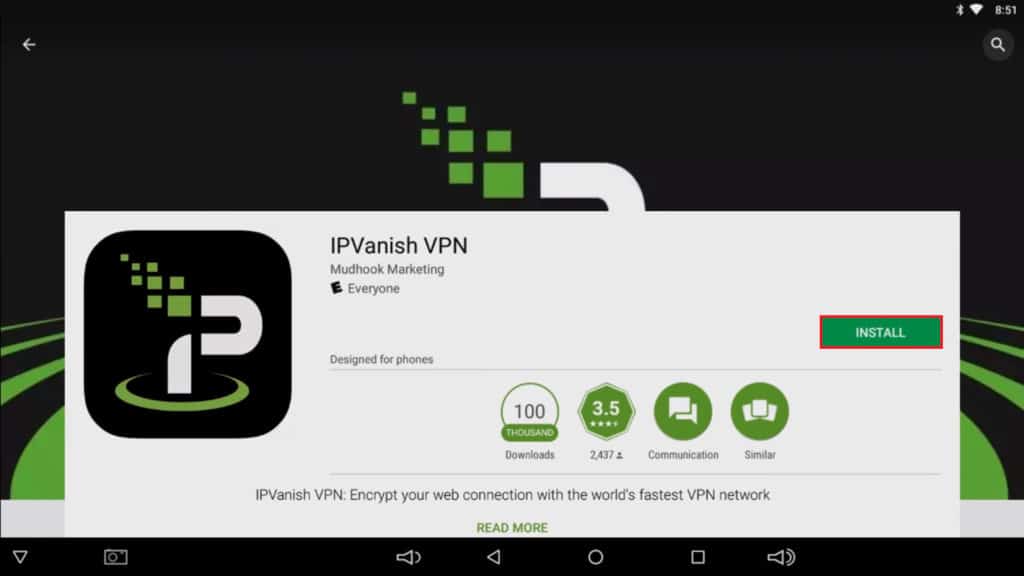 Next, you’ll be asked for the email address and password of your VPN user account. Enter these, and you’ll be taken to a page where you can choose which server to use. 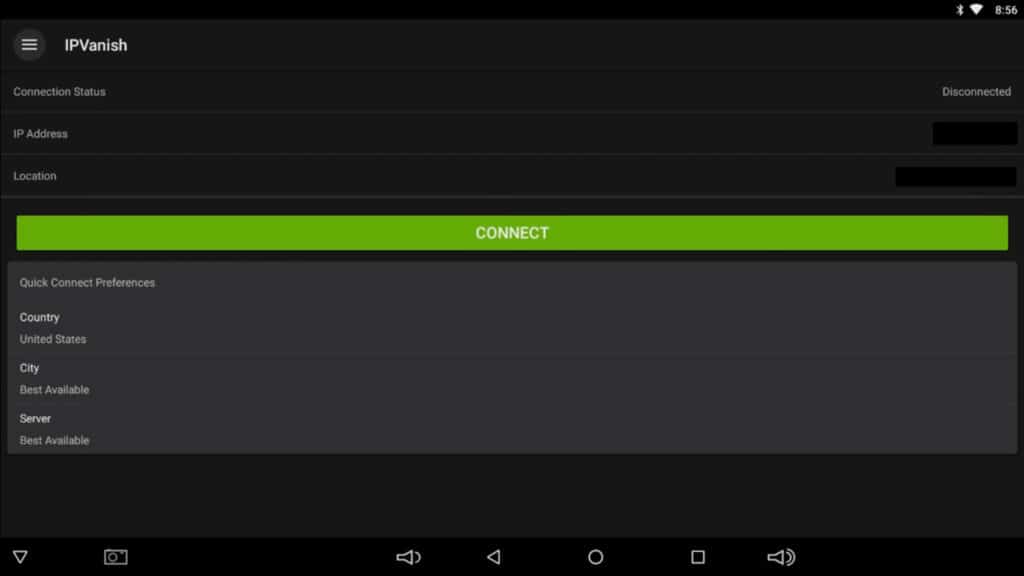 From here you can select the country or city you’d like to connect to a server in. You can also connect to a specific server, or whichever is the best at the current time. Once you’ve selected a location, click the button which says Connect. That’s it — all of your internet traffic on this device is now encrypted and cannot be read by third parties.

You don’t have to sacrifice your privacy just because you’ve chosen to use a pre-configured Kodi or Android TV box. Now that you know how, you can connect your device to a VPN and browse media in peace without the threat of ISP snooping and throttling. More importantly, you can stream without worrying about people trying to use your data for their own personal gain.

In essence, a VPN funnels all of your network traffic through an encrypted tunnel to a server somewhere else in the world. Once connected, there’s no way for anyone but you and your VPN provider to know which sites you visit, the files you download, or the contents of your messages. Because internet service providers (ISPs) don’t encrypt their customers’ traffic, your traffic is significantly safer when using a VPN.

Your IP address can reveal a surprising amount of personal information like which city you live in and who your ISP is. However, VPNs keep you safe by assigning you another temporary IP address. Once connected, snoopers can only see the IP address of the server you’re using, which tells them very little about you.

To increase your online security

There is a technique hackers use called a Man-in-the-Middle (MitM) attack. This allows them to intercept all incoming and outgoing traffic from your device. This includes information like your search history and login credentials. It’s possible that they could even install malware on your device which could infect other computers on your home network.

A good VPN prevents this type of attack from happening in the first place. Even if your Kodi box is compromised, the attacker won’t be able to read the encrypted traffic reports. Even with a very powerful system, this kind of encryption would take several thousand years to break.

Hackers aren’t the only people interested in your internet traffic, however. Some of the world’s largest ISPs have been caught limiting the internet speeds of their paying customers in an attempt to discourage them from streaming video online. This is a large part of what’s fuelling the net neutrality debate–there’s no reason why ISPs should be able to decide how you spend your time.

Your ISP will know that you’ve connected to a VPN. However, they can’t tell what you’re doing on a given site, making it harder justify throttling your speeds. Since your speeds are not being limited, video is less likely to stutter or buffer for long periods of time. In this regard, a VPN could actually improve your Kodi viewing experience.

Many countries restrict access to specific websites. This may be done to restrict access to certain types of harmful material, but in countries like Egypt, it is also used to prevent citizens from reading news which shows the government in a poor light. As a VPN allows its users to connect to servers in a different country, it can be used to bypass all governmental website blocks in the user’s location.

VPNs can also be used to access geo-restricted content without actually being in the required location. To access UK-only content, you just have to connect to one of your VPN’s servers in the UK.

In most countries, VPNs are completely legal. After all, they’re simply a privacy tool. However, in some parts of the world, their use is restricted, heavily monitored, or banned outright. Luckily, we have a definitive, country by country guide to where VPNs are legal that should answer any questions you might have.