Kodi Exodus Forks: What are they, and can you trust them? 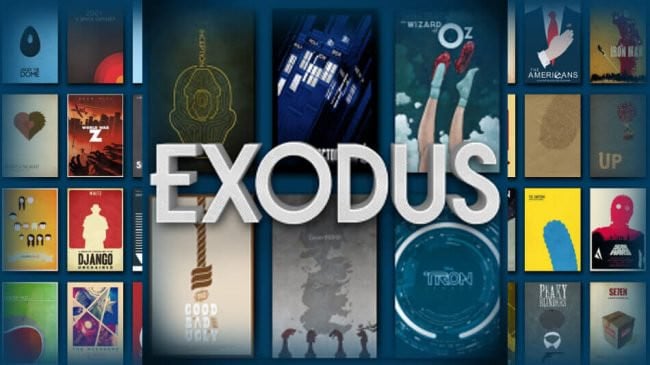 There are a few very popular Kodi addons that are forks of the Exodus addon. Are they trustworthy? Are they safe? We took a closer look to find out.

Kodi is free, open source software that makes it very easy to set up your own home theater system. It’s incredibly versatile and can be installed on a huge range of platforms including Windows, Mac, and Linux PC, USB Flash drive, Amazon Fire TV,  iOS, Android, Apple TV, Roku, Raspberry Pi, and the Amazon Firestick or Fire TV.

While Kodi allows you to play any audio or video files saved on your device, this isn’t an ideal playback method for mobile platforms due to their small internal storage space. Kodi users can also install plugins called addons. These addons create media libraries from the content found online and take up far less space than the media itself. You do, however, require an internet connection to use them.

Exodus is a very popular third-party addon. It provides access to TV shows and movies, but since it’s no longer being supported by its developers, several “forks” have appeared. Simply, a fork is just another addon that uses Exodus’ code as a base for further development. The problem is that these forks are often poorly documented or hosted in little-known repositories, making them riskier to use.

Kodi itself is completely legal to use, however, some third-party addons like Exodus and its forks provide unrestricted access to licensed content. This has contributed to the negative reputation that Kodi has and can potentially lead to legal trouble for the user. Kodi users should thoroughly research the laws in their location regarding streaming content online before attempting to install or use such addons for this purpose.

How to protect yourself when using an Exodus fork addon

All Kodi addons are vulnerable to hijacking, whether they’re official or third-party. This risk is compounded when using an addon from a single source. For this reason, it’s important to know how to keep yourself, your system, and your confidential data safe when using Kodi.

Once an addon has been compromised, an attacker can use a Man-in-the-Middle (MitM) attack to monitor your network traffic and steal your login credentials. They’d also have complete freedom to install whatever malware they wanted on your system.

Even your own internet service provider (ISP) is interested in your browsing habits. American ISPs are allowed to sell details of your activities to outside parties. Several major ISPs have also admitted to or been caught intentionally limiting their customers’ internet speeds. This is done to discourage streaming video online, even if you, as a consumer, are doing nothing wrong.

A VPN can protect you from these threats. VPNs encrypt all of your network traffic and protect your activities from any outside observer. This prevents the majority of MitM and because your ISP can’t tell if you’re watching videos, they’re less likely to automatically throttle your internet speeds. This can fix the stuttering or buffering problems many Kodi users encounter.

We recommend using IPVanish. It’s a popular choice among Kodi users thanks to its stable, high speed connections. IPVanish builds and maintains its own servers in more than 50 countries, so it’s very simple to bypass region-locking and watch whatever you’d like.  Importantly it’s one of a select bunch of VPNs that keeps no logs of customer activity.

IPVanish is one of the most portable VPNs available. It has dedicated software for all major operating systems and is also the only reputable VPN included in the Amazon Fire Stick app store.

What are Exodus fork Kodi addons? 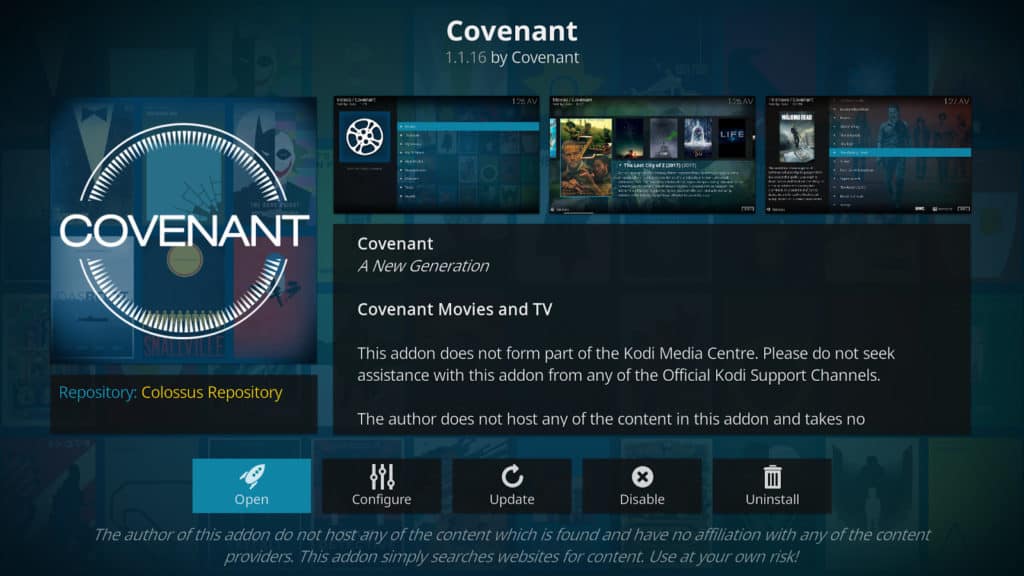 In software development, a fork is when someone takes a copy of a program’s source code and uses it as a basis for further development, often without the support of the original creator. As such, an Exodus fork is simply an addon that was originally based on the popular third-party Exodus Kodi addon.

Since Exodus is no longer being supported, several forks have appeared. The most popular of these, Covenant, is now the “official” replacement and is receiving updates from the original Exodus development team.

Exodus forks are usually just Exodus clones, maintaining the functionality of the original addon. These are intended to provide another way to access the content should Exodus be taken down. However, some, like the Gurzil or No Name addons, add new functionality or themes.

The problem with Exodus and its forks is that the content they offer is unlicensed. Despite the many different forks available, none of them solely provides access to legitimately sourced content. These forks also come with greater risk than some other third-party addons. As some of these forks are only found in a single small repository, an attacker only has to compromise one location to impact all of the addon’s users. Because some of these forks aren’t widely known, there are very few sources of trustworthy information should the addon be hijacked.

There are several popular Kodi addons that are Exodus forks. While we urge our readers to seek official sources of content, they may see the following addons recommended elsewhere. As such, we feel it’s important to provide an overview of what these addons do, and the disadvantages that they have.

What is it? Covenant is the “official” Exodus replacement and is being updated by the Exodus team. It has exactly the same functionality and a similar appearance to Exodus.

Why should you avoid it? Covenant shares all of the main problems that Exodus had. The majority of its content is unlicensed and there is no way to search only for official titles. Additionally, there are only a few legitimate sources, but dozens of illegitimate ones. This means that users looking for officially licensed content would have to research each title individually and simply, there are better, legal alternatives available. 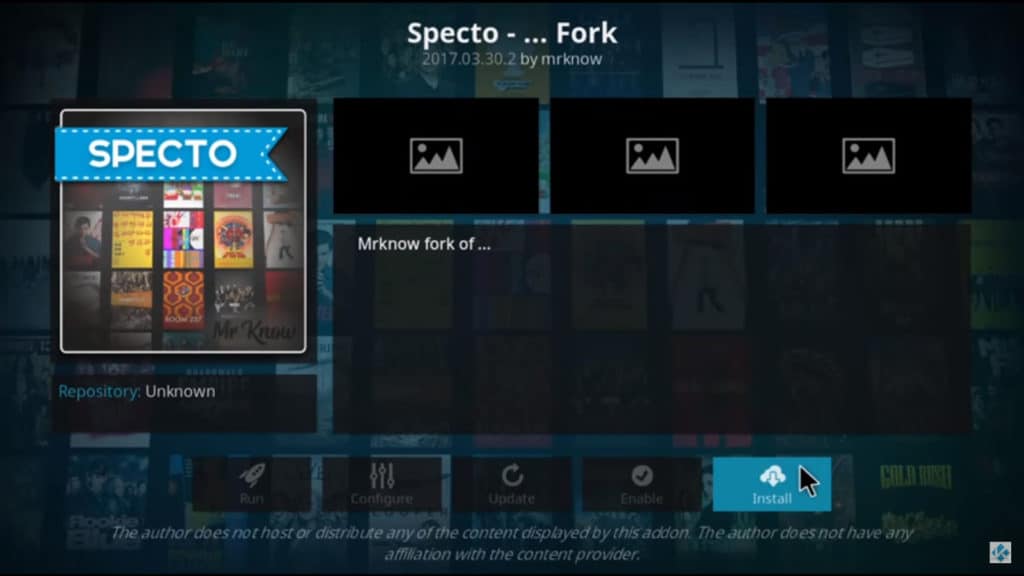 What is it? Specto isn’t a true Exodus fork. Rather, it’s based on Genesis, the addon that preceded Exodus. It has much of the same functionality, but also includes some of the features that were removed in Exodus like favorites and library integration.

Why should you avoid it? Specto has been around for over a year, which means attackers have had plenty of time to find any vulnerabilities that it might have. Also, since the Fusion installer stopped working back in June, Specto can only be found in small repositories. These are easier to hijack since they usually only have one or two developers as opposed to an entire team. Given that Specto is based on what is essentially legacy Exodus code, it comes with too much risk to be considered worthwhile. 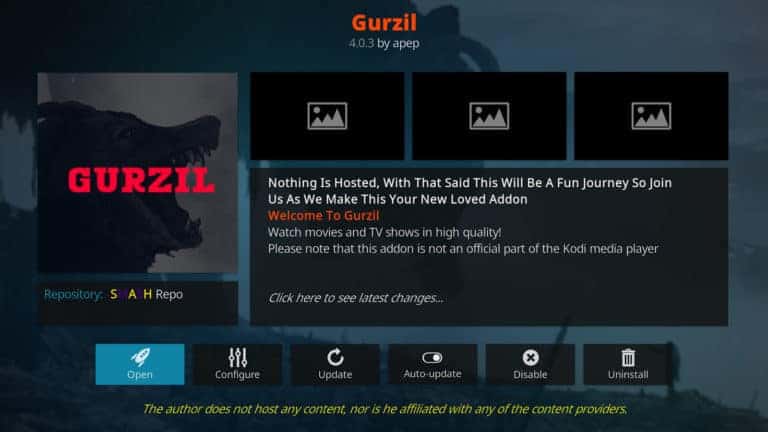 What is it? Gurzil is almost exactly the same as Exodus but its sources have been updated and there’s a new wolf-themed design.

Why should you avoid it? The real question is “why would you take a risk on an addon that’s almost identical to Exodus but less well known?”. Gurzil’s developer, SMASH, has a fairly active Twitter account, but you’d be far more likely to receive early warning of any hijacking attempt when using Exodus as it’s far more popular. Even if you find the wolf theme attractive, there are other ways to achieve this without installing addons that provide unlicensed content.

Should you use Exodus fork Kodi addons?

One thing that Exodus and all of its forks have in common is that they primarily cater to Kodi users looking to watch licensed content for free. However, these addons do not allow you to support the people or organizations that created the content in the first place. This reduces the incentive for similar content to be created in the future.

Also, with the negative reputation that these addons have brought Kodi, copyright holders are getting tougher. This means links will go down more quickly and harsher penalties may be imposed upon people caught streaming unlicensed content.

There are other issues too. These forked addons lack the security of official addons as they likely weren’t subject to the same level of technical validation during development. This means that these addons likely have unpatched vulnerabilities and may be more likely to be hijacked. Because most Kodi forums do not allow discussion of third-party addons, there are a very limited number of trustworthy sources of information. If one of your installed Kodi forks was to be hijacked, you likely wouldn’t know until it was too late.

For the reasons above, we do NOT recommend that our readers use Exodus fork add-ons to stream or share content.

Exodus fork addons offer little to Kodi users looking for legitimate sources of content. With no way to add new content providers, your options are very limited. However, there are several official addons which offer similarly sized content libraries while being safer to use. We’ve covered some of these below.

PlayOn is a service that lets you connect to all of your online streaming subscriptions and view the content in one place. In Kodi, this is done with the PlayOn Browser addon. Since there’s no official Netflix or Amazon Video addon, PlayOn is the only way to access this content without installing third-party addons.

In order to use the PlayOn Browser, you’ll have to make an account. The free tier offers a handful of sources including YouTube and VH1, but to connect additional sources or use the DVR functionality, you have to pay $2.50 a month. PlayOn offers a 30-day money back guarantee, so you don’t stand to lose anything by giving it a try.

TRY IT FREE: You can try Playon free for 7 days here

In the UK, the BBC makes TV shows and movies from its channels available on its online streaming service, the iPlayer. There are several live TV and radio stations available, as well as an extensive library of on-demand content.

Shows are added a couple of hours after they air, although you will need a valid UK TV License to watch them legally. If you’re a license holder, you can watch from abroad, but you’ll have to use a VPN to connect to a British server since the BBC region-locks their content. For a guide on which VPNs will work, click here.

iPlayer WWW can be found in the official Kodi addon repository.

FilmOn is an online service that provides access to dozens of free to watch TV channels from around the world. You can pay monthly to unlock extra channels, but this is entirely optional.

The FilmOn.TV Kodi addon offers a wide selection of live TV channels, neatly organized by category and country. This allows you to quickly find what you’re looking for without trawling through pages of foreign language results. There’s also a small selection of on-demand content and if you’re interested in radio coverage, this can be accessed via the FilmOn Simple addon, located in the same place –  the SuperRepo repository.

At first glance, Exodus and its various forks certainly seem attractive. However, scratch the surface and you’ll find that they leave a lot to be desired. There are many addons available that are safer, more secure, and most importantly, legal to use. Whether it’s movies, radio, or sports you’re interested in, we’re confident that the majority of Kodi users can find an addon that would suit them better.