Kodi Gurzil add-on: Should you install it? is it safe to use? 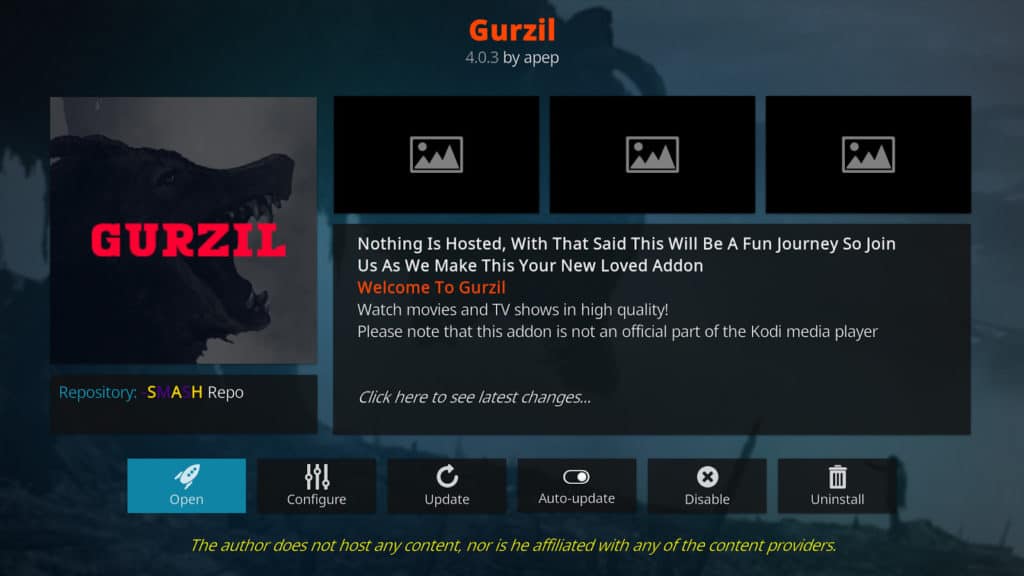 Interested in using the Gurzil Kodi addon? We’ve taken a look into this addon to discover more about what it offers, as well as offering some decent alternatives. Read on for more.

Kodi is open source software which takes the hard work out of creating your own home theater system. It’s easy to use, highly versatile, and capable of being installed on all kinds of devices including the iPhone, Raspberry Pi, Roku, Apple TV, Amazon Fire Stick, or even a simple USB Flash drive.

Read more: What is Kodi and how to get started with it.

Kodi gives its users two options for viewing content. Firstly, they can access music and video files which are stored locally on their computer. There’s also the option to install additional pieces of software known as add-ons. These provide the user with access to huge amounts of content which is hosted online.

Gurzil is one such Kodi add-on. In this article, we’ll be covering what exactly Gurzil is and how it works. Although every add-on for Kodi is hypothetically vulnerable to attack, third-party add-ons such as Gurzil come with additional risks. We’ll also be explaining some of the privacy and security concerns that all add-ons share, whether they’re official or third-party.

Kodi has been on the receiving end of a lot of negative press recently. Although the software is completely legal to use, certain add-ons have been providing access to unlicensed or otherwise unofficial content. For this reason, it is important for you to understand the laws regarding streaming content online in your country. This will help you minimize the risk of getting into trouble due to online streaming.

Important: Use a VPN with Kodi

A lot of Kodi users employ the services of a virtual private network (VPN) to hide their streaming activities. However, there are many reasons for a Kodi user to use a VPN even if they only access officially licensed content.

While any Kodi addons are at risk of hijacking, third-party addons like Gurzil are more susceptible to hacking. VPNs guard your network and streaming activities against many threats common to Kodi addon streaming such as Man-in-the-Middle attacks.

It’s important to use a VPN service that is designed to work with Kodi. While every VPN will slow down your connection due to how they work, some are not intended to handle high-definition video streaming. And unfortunately, some VPNs promise privacy but maintain logs on their customers’ browsing activities.

To ensure privacy, security and high speeds, we recommend IPVanish. The service maintains their own servers and infrastructure, provides a far faster and more stable connection than most of their competitors and keeps no logs of your activities. Plus, you can install it on an Amazon Fire Stick to stay protected when using Kodi away from home.

READER DEAL: Save 60% on an IPVanish plans here.

What is the Gurzil add-on for Kodi? 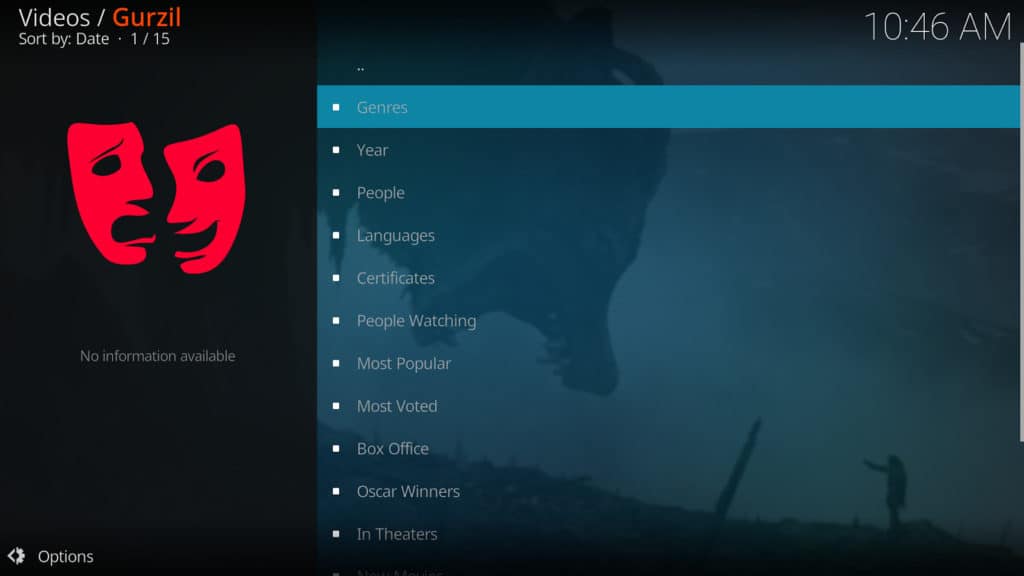 Gurzil is a fork of the popular third-party Exodus add-on. It has the same functionality but a slightly different appearance. Gurzil scrapes links from several providers to deliver content in several different languages and genres.

There are a couple of big problems with this add-on. First and foremost, none of the sites it gathers links from provide only licensed content. There’s also no way to add legitimate providers. For Kodi users who don’t want to watch pirated content, this add-on has nothing to offer.

Secondly, while we advise our readers to search for legitimate sources of content, we have to acknowledge that some people won’t. The fact is that there are already better-known Exodus forks available, which, while equally bad on the piracy front, have a bigger following.

This means that should they be hijacked or stop working you’re more likely to receive an early warning. In short, there’s a lot of risk and nothing to be gained by installing a little-known Exodus clone from a relatively small repository and developer.

For the reasons above, we do not recommend that Kodi users install or stream content with Gurzil.

Alternatives to the Gurzil add-on

Although Gurzil and the other Exodus forks offer access to a vast array of content, most of it is pirated. For users looking to access legitimate media, there are several other Kodi add-ons which would better suit their needs, and we’ll cover some of these below. 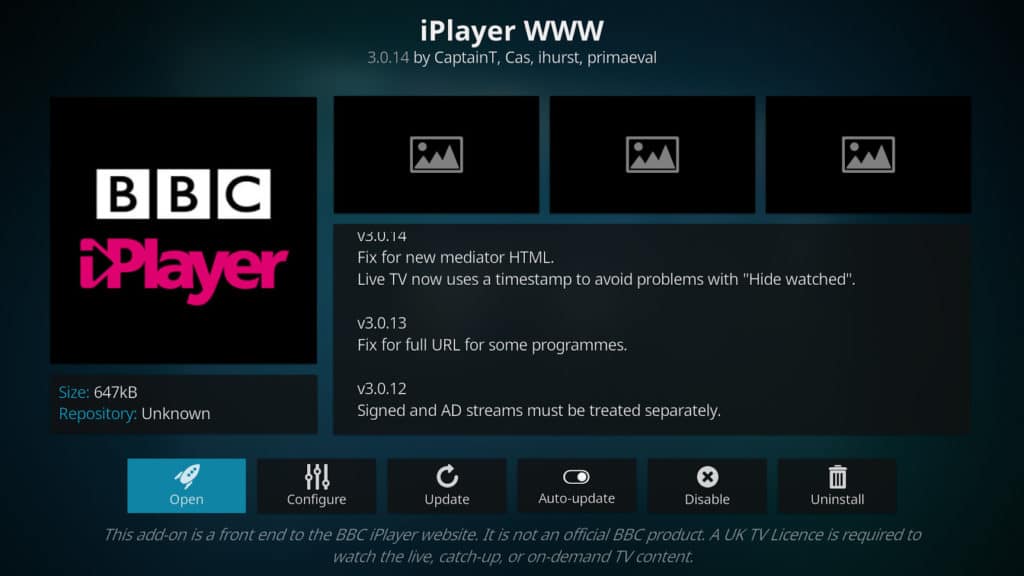 The BBC iPlayer is popular in the UK, so it comes as no surprise that there’s an official Kodi add-on for it. It provides access to on-demand and live content from the BBC’s TV and radio stations, and includes both TV shows and movies.

This add-on is completely free to use. However, if you’re located in the UK, you’ll need a TV license to watch legally. There was previously a loophole which allowed users to watch content without a license as long as it wasn’t live, but this was addressed last year. You’ll now be asked if you have a TV License before being allowed to use the iPlayer, but it doesn’t ask for any specific login details.

Additionally, if you’re outside of the UK, the iPlayer’s content will be inaccessible to you. To get around this, you just have to connect your VPN to a city inside of the UK. Once connected, you’ll have unrestricted access to some of the highest quality legitimate streams available.

iPlayer WWW is available from the official Kodi add-on repository.

There is no other add-on, official or otherwise, which can compete with the sheer size of YouTube’s content library. It currently has so many videos that it would take several thousand years to watch them all, and more are added every day.

This means that whatever your tastes, there is always going to be something for you to watch. YouTube has everything from live eSports tournaments to 24-hour news coverage to short independent films. The best part is that the vast majority of the content available is completely legal. Videos which contain unlicensed copyrighted content are usually quickly taken down by the copyright holders, so the odds of you stumbling onto any by mistake are low.

This add-on even recommends videos that you might like based on your watch history. You can rate specific videos to increase or decrease the chance of similar content being recommended to you. YouTube not only has more content than Gurzil, but it also makes the good videos easier to find too.

The YouTube addon is available from the official Kodi add-on repository.

Gurzil does offer a small selection of live TV streams, but one of the best sources of live TV channels is a completely legitimate add-on named FilmOn.TV.

This add-on takes all of the streams from www.filmon.tv and allows them to be viewed directly through Kodi. There is one caveat: for some of the channels, you’ll require a FilmOn subscription, which costs almost $20 a month.

While this might seem a little steep, it’s quite reasonable. FilmOn delivers dozens of live TV streams from all over the world for free, and the subscription is entirely optional. It also groups content both by genre and country. This means that if you’re currently away from your usual country of residence, you can quickly find the shows that are playing back home.

It also allows you to access its channels for far less than a traditional cable package usually would, and since Kodi can be installed on mobile devices, you can even watch live TV on the move as long as you have a decent data plan.

The FilmOn.TV add-on can be found in the SuperRepo repository.

For those looking for some AAA-rated movies and TV shows for free, Crackle is a bit of a like a dream come true. A free movie streaming service from Sony Entertainment, Crackle offers Sony-branded movies without evening asking for a dime. You’ll even find some films and TV shows not owned by Sony, but which Sony has permission to stream, such as the hit anime series Sword Art Online.

This addon draws all of its streams from the official Crackle website and ports them through Kodi. You cannot access all available content without an account for the site. Unfortunately, you can’t add in your account information through the Crackle Kodi addon, so you’ll have to resort yourself to the several dozen free movies and TV shows freely available without an account.

Even still, Crackle is an excellent, free, and wholly legal streaming option for Kodi users.

There are several Crackle addons from multiple developers. However, we recommend the Crackle addon found in eracknaphobia’s Addon Repository.

Gurzil has a large content library, that’s undeniable. However, as it’s a clone of Exodus, it shares all of the same problems that we’ve mentioned previously. There is no way to distinguish the minuscule amount of licensed content from the other, mostly pirated media on offer. Both Gurzil and Exodus place all of the risk squarely on the shoulders of the user.

Gurzil is a fairly unknown third-party addon from a relatively small repository. It also has the potential to be far less secure than an official add-on. The Gurzil development team has no social media presence. It provides access to pirated content, official Kodi forums have banned discussions about it. This means that if it were to be hijacked, there would be no way of knowing until it was too late.

When you consider the huge amount of risk that this add-on brings, one thing becomes clear: Gurzil is far from the best way to stream content using Kodi. With the number of official add-ons that provide a comparable or better experience, there’s sure to be a more suitable add-on for you no matter what your tastes are.