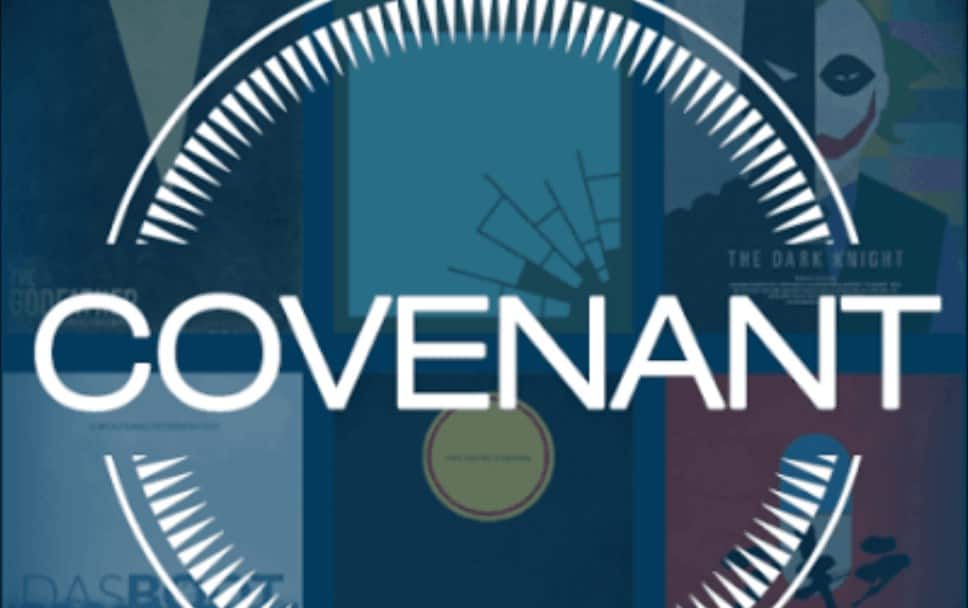 Several major third-party Kodi addon developers have gone offline recently. This article will shed light on the factors that led to this and explain what happens next.

On November 15th, several prominent third-party Kodi addon developers received letters threatening legal action from the Motion Picture Association (MPA) and the Alliance for Creativity and Entertainment (ACE). As a result, some of the most popular third-party addons like Covenant, Bennu, and Ares Wizard. were taken offline. We’ve thoroughly researched the events that took place and have constructed a timeline to help explain what really happened.

The developers that received cease and desist letters were known for their contribution to addons that offered unlicensed content sources. To minimize risk to yourself and your system we strongly encourage our readers to use only official addons and sources when streaming content.

Some people use virtual private networks (VPNs) to hide unlicensed streaming from their internet service provider (ISP). However, a VPN can greatly benefit Kodi users that only watch properly licensed content too.

VPNs work by encrypting all incoming and outgoing network traffic. This prevents the majority of Man-in-the-Middle attacks and stops your ISP from tracking your activities. Because your ISP doesn’t know what you’re doing, they can’t sell your browsing history or use it to justify throttling your connection.

Not all VPNs are equal. Some keep detailed logs of your activities, significantly reducing the amount of protection they offer. Some others contain malware, or slow your network speeds down until they’re almost unusable. For these reasons, it’s important to choose a VPN that can be trusted with your confidential information.

We recommend IPVanish. It has minimal impact on your browsing speeds and doesn’t keep track of what you do online.

A timeline of recent events

Once third-party addon developers started receiving legal threats, the situation progressed very quickly. As several high-profile developers deleted their Twitter accounts it became difficult to separate fact from speculation and keep track of all the new developments. That’s why we’ve created the detailed timeline below: it contains all the information we could uncover above the new Kodi shakeup for those without the time to research it for themselves.

Jsergio123, a developer that had worked on several third-party addons and the URL Resolver dependency, announced on Twitter that he would be ceasing development on all his addons and that the The_Alpha, another developer, would be doing the same. This took the Kodi community by surprise and while rumors indicated this was due to legal threats, the full picture would not become clear until later. 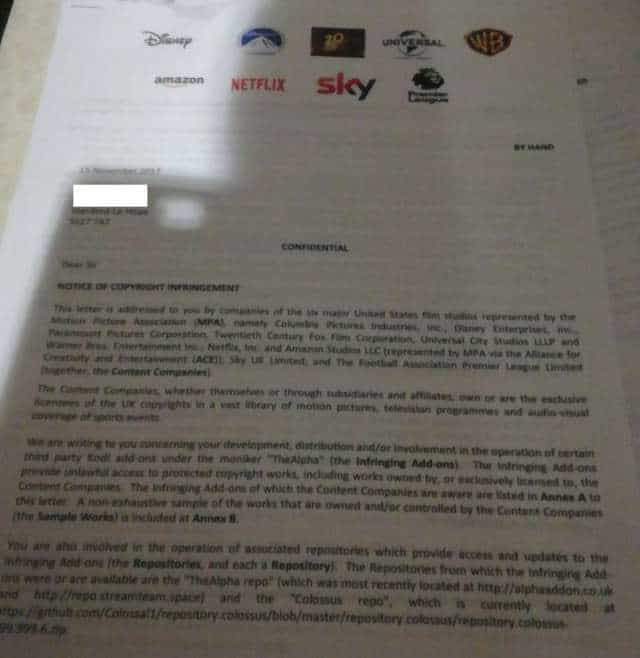 True to his word, The_Alpha took down his repository and with it, Covenant, Bennu, and the URL Resolver. He also deleted his Twitter account and shared a cease and desist letter he had received to TVAddons, another addon development group that are currently facing their own separate legal challenge. This letter was sent by the MPA and ACE, organizations comprised of industry titans like Disney, Netflix, Amazon, and Paramount Pictures.

Because the URL Resolver is required for many addons to correctly process links, there was speculation that many previously working addons would become unusable. However, the TVAddons team confirmed that they would continue releasing updates for the URL Resolver, albeit at a slower pace than jsergio123.

It was around this time that many prominent third-party Kodi addon developers began to disappear from social media. Echo Coder, Ares Wizard, Mucky Duck, and DandyMedia all deleted their Twitter accounts. Further, Lucifer, and the Pulse team both stepped away from Kodi. Smash took his repo down to remove certain addons. Gracie242, the person behind Gracie’s repo, called for calm and offered displaced addons a new home in her repository. MR. Blamo, the creator of the Death Streams addon, was among the first to accept.

As the reports of cease and desist letters continued to come in, Kodi developers started to form a response. Caz Wallace confirmed that he’d received a letter and remarked that he’d be removing all copyright-infringing addons from his repository. Meanwhile, Gracie242 continued to rehome addons. Gracie’s repo was renamed “The Looking Glass” and moved to a new location. It was at this time that Project D announced he’d found a new place for his addons. 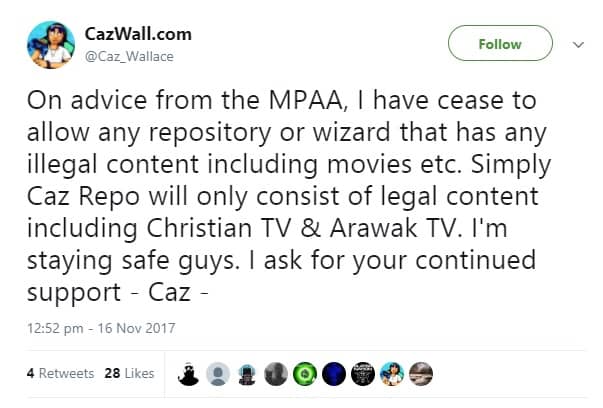 This is when the first reports of suspicious updates began to appear. The Cerebro repository released an updated version of Covenant, but this were dismissed by the Kodi community as untrustworthy.

The Noobsandnerds team announced on Twitter that they would no longer be providing updates publically. Instead, they’ll be using Twitter for posting tutorials and their dedicated forum for user support. Also, Kodi users with the Pulse CCM build were greeted with a message telling them to “sit tight”, hinting at Ares’ return in some capacity in the future.

Rockcrusher, one of the people behind the Vortex addon, said on Twitter that they’d be removing the “Special Events” section in order to make the addon fully legal. They have since released an update for Vortex and development appears to be continuing as normal.

Smash began to remove videos showing copyright-infringing content from his YouTube channel and was bombarded with hateful messages. As a result, he considered deleting his Twitter account pending the results of a user poll. 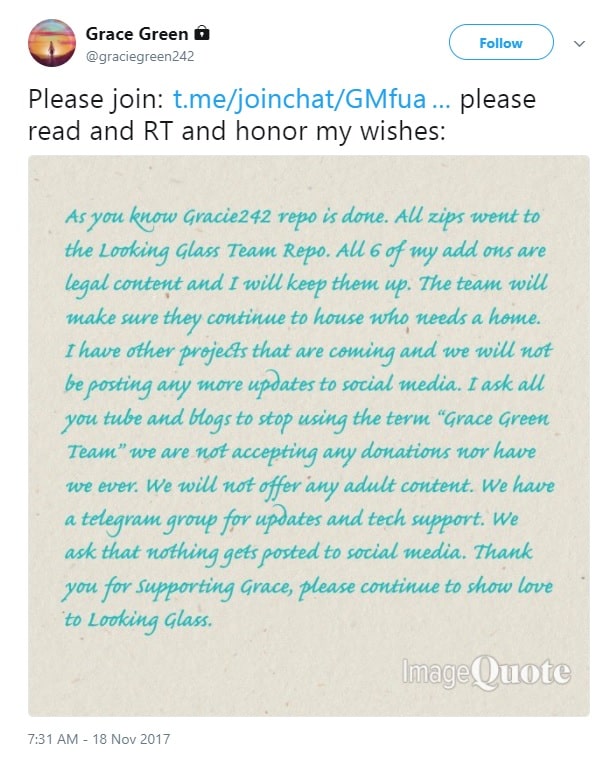 Gracie242 revealed that Gracie’s repo is no more, and that all six of her legal addons will be moving to the Looking Glass repository. She has additional personal projects but will no longer be posting updates to social media. Instead, users looking for support can join the support group. The Looking Glass repo also became the new home of the Motor Replays and Polaris addons.

The 18th marked the first real communication from the Ares project team since this situation began. In a forum post (registration required), the team said that all Ares files have been deleted and confirmed that they would not be making a return at any point. Interestingly, they also mentioned that their cease and desist letters were delivered by Wiggin, a well-known legal firm specializing in intellectual property rights. This heavily suggests that the consequences of ignoring the letter would be severe, and as the Ares Team note, they “have no choice”.

What are the implications of these changes?

The short term effects of this new Kodi crackdown have already been seen. Third-party developers have weighed the risk of continuing development and many have decided to stop entirely. Those that are determined to keep going are counting on TVAddons winning its legal battle; this would lend credence to the argument that as long as your addon doesn’t host copyright-infringing material, there’s nothing to worry about. However, with a handful of the largest developers out of the picture, it’s possible that smaller developers will be targeted next.

It’s going to be interesting to see if Bennu is replaced. Originally, Bennu was created to replace Phoenix after it, ZemTV, and TVAddons were sued by Dish Network in June. Considering Bennu only lasted a few months, developers will no doubt be questioning the viability of a long-term replacement. There are wider implications for the community, however, because Bennu and other unlicensed streaming addons help perpetuate a negative impression of Kodi itself. This gives the press free reign to publish stories like “Kodi boxes could kill their owners”, something that neither Team Kodi nor its users want.

In the long term, it’s possible that these legal challenges encourage the growth of addons that use official sources. This is something that the Kodi team have expressed interest in previously so it’s not a huge leap, however some kind of arrangement will likely have to be formed between Kodi and the copyright holders to protect official addon developers from legal challenges like the ones we’ve seen recently.

When an Exodus developer quit earlier this year, they deleted their GitHub account. Because GitHub makes usernames available again immediately, this allowed someone else to use the developer’s name and release unsafe addon updates.

With at least one developer deleting their GitHub profile, there’s every chance that this could happen again. To prevent this, we strongly recommend our readers disable automatic addon updates within Kodi. This is very straightforward and only takes a minute, but can prevent an attacker from installing malicious software on your system,

To disable automatic updates, click the gear icon on Kodi’s main page. Click the System Settings box on the right, and scroll down to the Add-ons tab on the following page. On the right, click Updates and select Notify, but don’t install updates. This way, you’ll know when a new update is available and will be able to more thoroughly check its veracity. Since it takes some time for the community to confirm if an update is malicious or not, we recommend waiting two weeks before installing an update.

While there are repositories claiming to have working versions of addons that the original developers had taken down, there’s no quick way to tell if these are legitimate or not. Of the removed addons, the URL Resolver is the only one that is needed for certain official addons.

Because TVAddons is a well-known and trusted source, there’s no need to install or update the URL Resolver from any other source.

This wave of cease and desists has created a crisis among Kodi’s third-party addon developers. Addons are likely to continue to be rehomed in the coming days and it’s possible that more developers may decide to call it quits. We’ll keep you informed of any changes as the situation progresses but in the meantime, Kodi users looking to switch from third-party addons to official ones would do well to check out our guides to the best official sports, movies, live TV, and cartoon addons.