The Kodi URL Resolver dependency has undergone some changes recently. This article will explain what to do if the URL Resolver is missing, won’t download or is not working.

On November 15th, several Kodi addon developers received letters from the Motion Picture Association (MPA) and the Alliance for Creativity and Entertainment (ACE). This led to the Colossus repository being taken offline, taking with it several popular third-party addons like Covenant, Bennu, and Ares Wizard. However, as the URL Resolver was developed by one of these individuals, it has also been removed. This article will explain what the URL Resolver does and where it can be found going forward.

The only developers targeted by these legal threats were ones that created unlicensed streaming addons. We urge our readers to only use official sources; they’re far more secure, often provide access to similarly sized content libraries, and are completely legal to use.

We’ve got full details here of why Kodi Colossus is not installing and details here on why Kodi Bennu is missing. Read on for more on Kodi URL Resolver.

Some people use a virtual private network (VPN) to hide unlicensed streaming from their internet service provider (ISP). However, VPNs have several entirely legitimate uses too and can help keep your personal information private.

VPNs work by encrypting all incoming and outgoing network traffic. This means that no outside observer can tell what you’re doing online. It prevents your ISP from selling your browsing habits or using them as a justification to throttle your internet connection. A VPN also renders most Man-in-the-Middle attacks useless, thereby keeping sensitive information like login credentials or emails safe.

Choosing the right VPN is vital. Some will slow your connection to almost unusable speeds while others keep detailed logs of your browsing history. This defeats the point of using a VPN and makes it significantly easier to track your online activity.

We recommend IPVanish. It has minimal impact on your network speed and provides consistently stable connections to more than 50 countries. It’s also the easiest VPN to install on mobile platforms like Android, iPhone, and the Amazon Firestick.

READER DEAL: Save 60% on an annual IPVanish plan here.

What happened to the URL Resolver?

Jsergio123, a Kodi developer who had worked on several third-party addons, was the first to announce that he would be ceasing development on their addons. This included URL Resolver and Meta Handler, two dependencies that many unofficial addons relied on.

The catalyst for this decision was a legal letter he had received from the MPA and ACE, a collaboration between media industry titans like Disney, Netflix, Paramount Pictures, Amazon, and SKY UK.

The problem here is that the URL Resolver isn’t only used for unlicensed streaming addons. It simply provides a way to retrieve content from a URL, accounting for CAPTCHA verification and various website file structures. As a result, it’s used by some official addons too. To make matters worse, some unofficial addons, like Bubbles, don’t even need the URL Resolver as they can resolve their own links, or use other scripts, such as NaN Scraper, that work differently but produce a similar result.

The TVAddons team briefly took their repository offline back in August pending legal action but returned soon after with all unlicensed addons removed. URL Resolver was one addon that wasn’t removed, and TVAddons have said that they’ll be taking over development on it in the future. They did note, however, that updates may come at a slower pace as a result of jsergio123’s retirement.

URL Resolver’s takedown has left a void for attackers to exploit. In fact, some repositories like Cerebro have already begun hosting the removed addons and releasing updates. Without a full review of the code, there’s no telling what these updates will do, if anything. As such, these updates should be considered unsafe until verified by the Kodi community at large.

While there has been a mixed response to the removal of third-party addons like Covenant, the general consensus among Kodi addon developers is that URL Resolver is crucial. That said, taking over development of this dependency could attract unwanted attention from the MPA.

More than likely, URL Resolver will continue to function as usual, although updated versions will likely have to be manually installed, at least in the short term. Even if URL Resolver completely disappeared, though, the majority of official addons would continue to work.

The MPA’s legal threats have sent shockwaves through the Kodi community. They have resulted in several repo and addon takedowns, including everything from the Ares Wizard team, The_Alpha, jsergio123, Echo Coder, DandyMedia, Lucifer, Pulse, and MuckyDuck.

Since at least one developer’s GitHub account has been deleted, that username is now free for anyone to take. This happened before and was used to release an unsafe Exodus update, so there’s no reason to think it won’t happen again.

For this reason, we urge our readers to disable automatic addon updates.This can be done by clicking the gear icon on Kodi’s home screen. Next, click System Settings and select the Add-ons tab on the left-hand side of the screen. In the box on the right, click the Updates setting. Finally, select Notify, but don’t install updates. This will let you know of any new updates so that you can research them and find out if they’ve been verified by the community or not.

A good rule of thumb is to wait a couple of weeks after an update becomes available since before this time, people are usually just speculating as to an update’s purpose.

TVAddons is a well-known development team and since they’ve said they’ll be releasing URL Resolver updates, there’s no reason to download them from any other source.

The URL Resolver is mostly (but not entirely) used for third-party addons. As such, these changes won’t affect the majority of official addons. The following addons will continue to work, are completely legal, and offer content libraries that are similar in size to those of the most popular third-party addons.

Bigstar Movies & TV is an online streaming platform that offers thousands of titles to choose from. Its media library is separated into fairly specific categories and none of its content is region-locked. This means that it can be watched regardless of where you are in the world.

There’s a search function to help you find something specific, and while most of the movies on offer are fairly unknown, there are several award winning films and TV shows including full seasons of the British cult classic, Peep Show.

The Bigstar Movies & TV addon can be found in the MetalChris repository.

YouTube is the biggest video streaming platform in the world and has a media library that would take thousands of years to watch. The main advantage that YouTube has over its competitors is its wide range of content; there’s videos covering everything from literary criticism to DIY. This means that there’s always going to be something you find interesting.

The YouTube Kodi addon maintains most of the functionality of the website. Users can add videos to playlists, view their subscriptions, and create a video queue. While you can’t comment or use YouTube’s messaging features, these aren’t particularly useful within Kodi, so it’s easy to see why this functionality were removed.

The YouTube addon can be found in the official Kodi addon repository.

The PlayOn Browser allows Kodi users to integrate their accounts from various online streaming platforms and watch their content in a single location. Since there are no official Netflix or Amazon Prime Video addons, the PlayOn Browser is the easiest, safest way to access their media libraries within Kodi.

The premium membership costs $2.50 a month and not only expands the range of sources that can be connected but also unlocks the ability to skip ads and record video to local storage. Since the free version only offers a small selection of free to watch content, paid membership is definitely preferable. 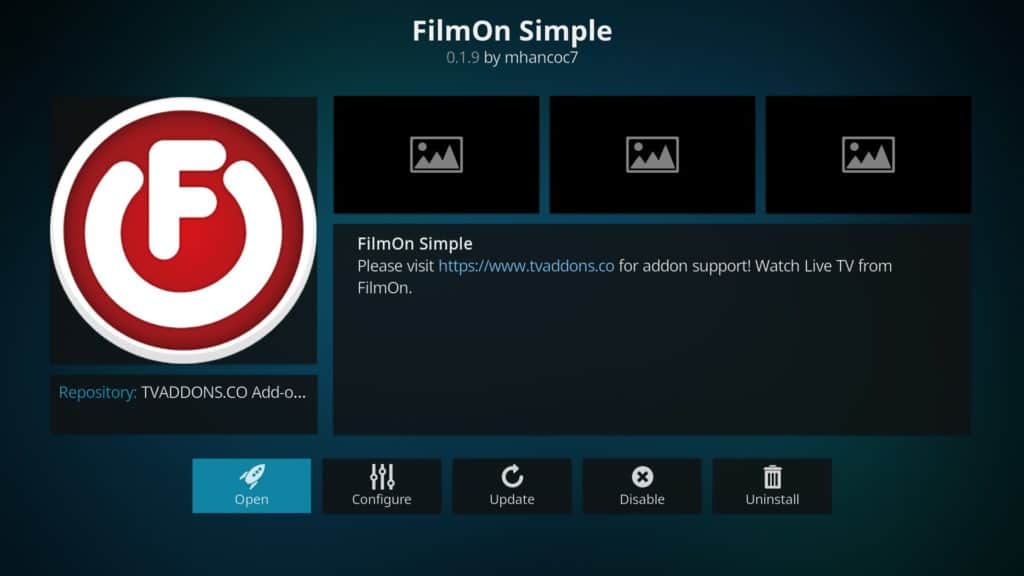 One thing Covenant and similar addons rarely offered is the ability to watch live TV streams. FilmOn Simple offers hundreds of live TV channels from all around the world and while there are paid memberships available, most of these can be watched for free.

There is a slight tradeoff in that free streams are only available in standard definition but considering that there’s no region-locking and there are streams from numerous countries, in several different languages, this isn’t a huge issue.

The FilmOn Simple addon can be found in the TVAddons repository.

The URL Resolver is an important Kodi dependency, but it’s not vital if you only use official addons. There are plenty of high-quality addons that will be unaffected, regardless of whether you’re looking for sports coverage, movies, TV shows, or live streams. It’s also worth noting that any problems you experience may not be relating to the URL Resolver, so check out our guide to debugging some of the more common Kodi issues.