How to watch Champions League 2018 online or on Kodi 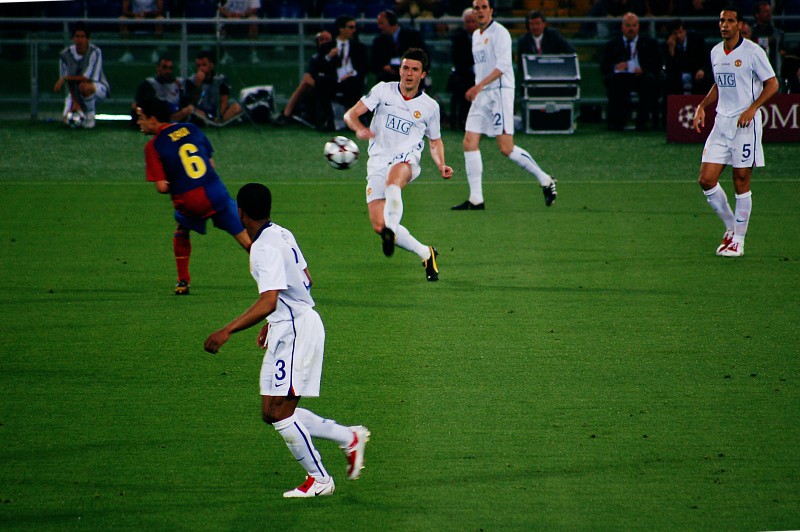 Beginning in February, sixteen teams will face each other in the “knockout phase” of the UEFA Champions League. Over the next three months, all but one will be eliminated, with the winner being crowned the new champion. If you’ve been looking forward to this event, you may have wondered how you can watch it online or on Kodi. This article will explain how to watch UEFA Champions League with Kodi or a web browser.

Kodi is a revolutionary software media player created by the Kodi Foundation. It allows users to watch video or music stored on their devices or streamed from the Web. It can be installed on a PC, Mac, Amazon Fire Stick, Android or iOS phone, or Apple TV device. Kodi allows users to play all of their media from one piece of software, eliminating the need for multiple browser windows or apps. It also blocks advertisements from many streaming-video sites.

Related article: What is Kodi? How can I start using it?

Whether you are using Kodi, a streaming app, or a web-browser, you should always use a virtual private network (VPN) when streaming video. If you stream video without a VPN, your ISP may throttle your speed, causing your video to buffer. ISPs often do this to conserve network bandwidth.

Streaming video providers may also use geoblocking to prevent you from accessing content if you are not located in the provider’s home country. When using a VPN though, a streaming-service usually cannot know where you are located. In addition, Hackers may use man-in-the-middle attacks to try to steal your private information. But a VPN can help to prevent this by encrypting your data, making it unreadable to most hackers.

Not all VPNs are effective for streaming video. Some don’t have apps for TV devices, don’t have have servers in enough countries to get around geoblocks, or are too slow to stream high-def video. Others invade users’ privacy by keeping logs.

For these reasons, we recommend IPVanish for streaming video users. In our testing, we found that it was fast enough to stream 1080p video with no buffering. It has servers in over 60 countries. IPVanish keeps no logs. It has native apps for Amazon Fire Stick and Nvidia Shield. It’s an excellent way for users to protect their privacy and security while streaming video.

READER DEAL: Save 60% on IPVanish plans

For a broader list of VPNs that are good for streaming video, read our VPN guide.

How to watch Champions League online

If you want to watch Champions league matches through a web browser or app, here are some of the options available. 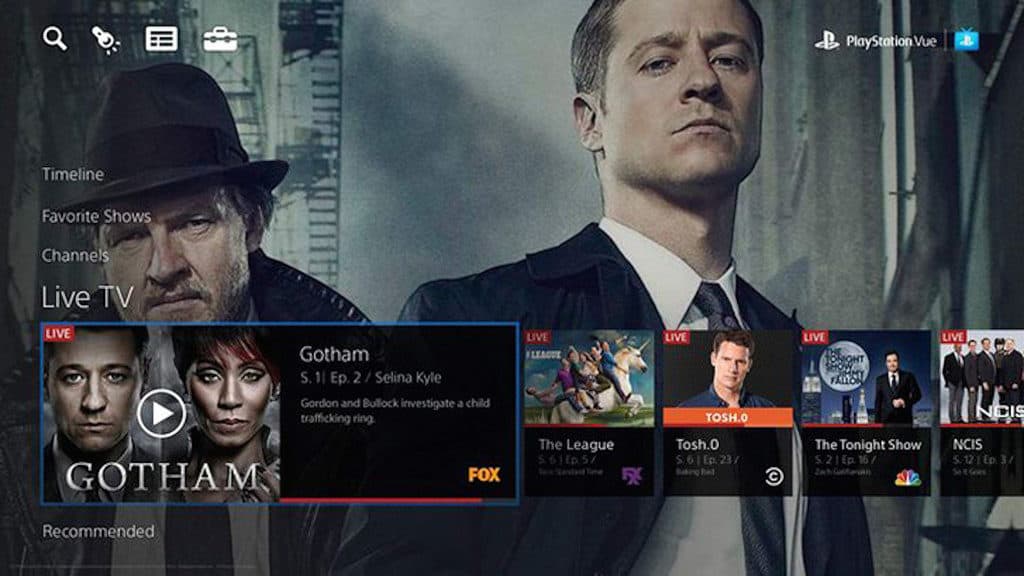 Playstation Vue is an over-the-top TV service for U.S. viewers. It offers Fox Sports 1 and 2 as part of a broader package that costs $39.99/month. If you want Spanish-language commentary for Champions League matches, PS Vue offers a larger package that includes ESPN Deportes for $54.99/month.

Since Fox Sports and ESPN own the exclusive rights to broadcast Champions League matches in the U.S., PS Vue will allow you to see them all.

This service also allows you to save Champions League matches to your “favorite shows” list to be recorded and stored in the cloud, which is useful if for some reason you can’t watch the matches live.

PS Vue offers a free trial for the first seven days. You can sign up at the official website.

Related article: How to watch Premier League online and on Kodi

Sling TV is another TV service aimed at cord-cutters. It offers Fox Sports 1 and 2 as part of its $25/month “Sling Blue” package. This allows you to see all of the U.S. broadcasts of Champions League events in English. For Spanish commentary, select the $20/month “Sling Orange” package and add in the $5/month “Best of Spanish TV” channels. This will give you access to all of the Champions League events on ESPN Deportes.

Fubo TV is a U.S. over-the-top TV service aimed specifically at sports fans. It offers FS1 and FS2 as part of a broader sports package that costs $44.99/month. The first month is available at a discounted $19.99/month, and this charge only occurs if the user doesn’t cancel after the first seven days. Fubo TV allows you to see all of the Champions League events broadcast in the U.S. with English-language commentary. Unfortunately, ESPN Deportes is not available, so there is no way to see these events with Spanish commentary using Fubo TV.

Fubo TV’s official website is available at this address: https://www.fubo.tv/.

DIRECTV NOW is yet another service that will allow you to see Fox Sports and ESPN channels without a cable or satellite subscription. For $35/month, it offers a “live a little” package that carries Fox Sports 1. This will allow you to see at least some of the Champions League matches in English. For $60/month, it offers a “go big” package that includes both Fox Sports networks, allowing you to see all of the matches. Champions League matches with Spanish commentary from ESPN Deportes are not available.

If you don’t mind watching the matches with German-language commentary, you can view them for free using a Swiss TV service named Zattoo. Zattoo carries both ZDF and ORF 1 (ORF eins), two German-language channels that carry Champions League matches. The service is ad-supported and does not require a subscription fee.

In order to view Zattoo content, you must sign up for an account using a name and email address. No mailing address or credit card is required. Zattoo is geoblocked to anyone living outside of Switzerland, but my own testing with IPVanish revealed that VPNs are effective at bypassing this block.

How to watch Champions League 2018 with Kodi

If you want to see Champions League matches using Kodi, there are several options available.

The Playstation Vue Kodi addon allows PS Vue subscribers to watch any of its content through Kodi. To watch the matches live, use the channels menu to navigate to FS1 or FS2. If you want to record the matches and watch them later, use a web browser to add Champions League to your “favorite shows” list. Once it is added, PS Vue will record each match as it occurs. You can then go into the favorite shows menu in the Kodi addon to watch any of your recorded matches through Kodi. 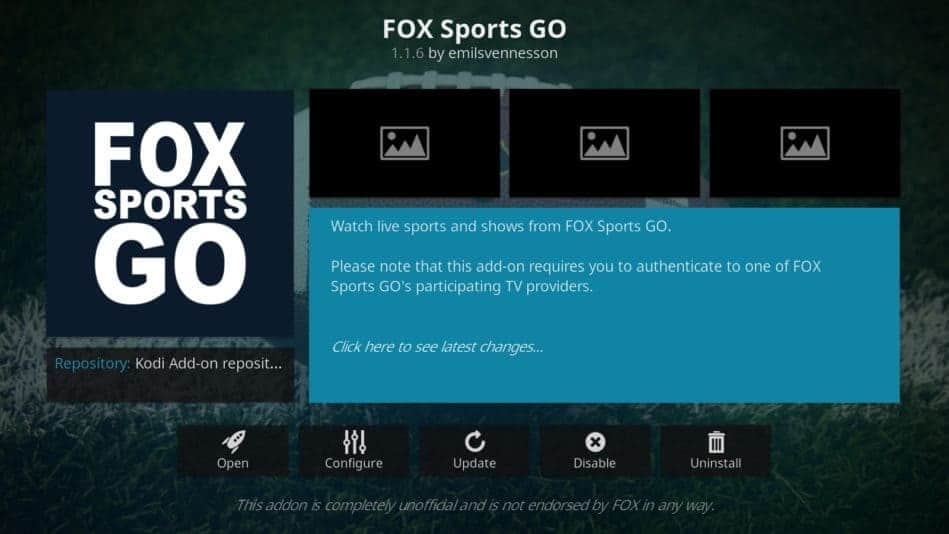 If you want to watch English-language Champions League broadcasts in the U.S., another option is to use the FOX Sports Go Kodi addon. In order to use this addon, you’ll need a subscription to Fox Sports channels from DIRECTV NOW, Sling TV, Fubo TV, or some other online TV provider. Alternatively, you can sign in using a cable or satellite provider.

The FOX Sports Go Kodi addon can be found in the official Kodi repository. 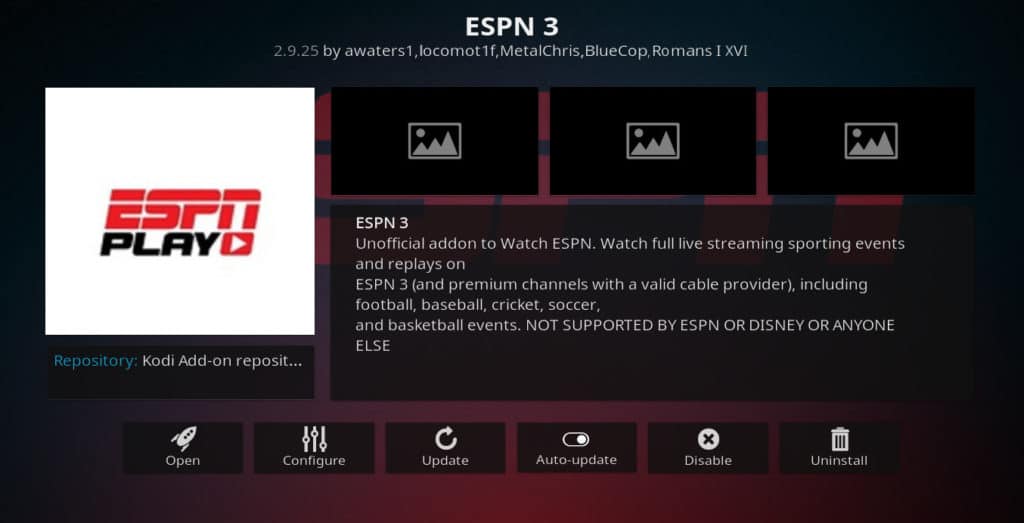 If you live in the U.S. and want Spanish-language commentary, the ESPN3 Kodi addon is the place to find it. All of the Spanish-language Champions League knockout phase broadcasts can be seen through this addon. In order to use ESPN to watch the matches, you will need a subscription to ESPN Deportes through a cable, satellite, or over-the-top TV provider.

The ESPN3 Kodi addon can be found in the official Kodi repository. Here is how to install ESPN3 for Kodi.

If you don’t mind watching the matches in German, you can view them for free through the Zattoo Box Kodi addon. Sign up for the Zatto free service using a name and e-mail address. When the match airs, select ZDF or ORF ein from the Zattoo Box Kodi addon channel menu. If you are accessing the Internet from outside Switzerland, make sure your VPN is set to a Swiss server or it won’t work.

If none of these other options appeal to you, one final option is to watch highlights of matches from the UEFA YouTube channel and other YouTube channels devoted to football. The YouTube Kodi addon can be found in the official Kodi repository.

Other Kodi addons not recommended

In addition to the recommended Kodi addons listed here, there are other Kodi addons that provide access to UEFA matches that you may find mentioned on other sites. Many of these addons provide links to unlicensed content that violate copyright laws. In addition, they may be unsafe to install on your device. We mention them here so that you know which Kodi addons to steer clear of. We do not recommend these Kodi addons.

Here are the dates for the upcoming UEFA Champions League matches. Except for the finals, each match consists of a first and second leg. The scores from both legs are aggregated to determine the winner.

If you want to watch Champions League matches online or on Kodi, there are many options. Depending on where you are located and whether you are willing to pay for a premium subscription, you can watch using a web browser with PS Vue, Sling TV, Fubo TV, DIRECTV NOW, or Zattoo. If you’re using Kodi, these matches can be accessed with the PS Vue, Fox Sports Go, or Zattoo Kodi addons. You can catch highlights of the games using the YouTube Kodi addon.

If you’ve found the information in this article to be helpful, you may want to read some of our other streaming-video articles, including, how to watch NBA games online or with Kodi, how to watch the Olympics with Kodi or streaming online, and the five best NACAR Kodi addons.