How to watch UFC 281: Adesanya vs Pereira on Kodi with a VPN

UFC 281: Adesanya vs Pereira is available to live stream on Kodi but there are limitations if you're watching from abroad. We walk you through how to get the most of UFC on Kodi.
Sam Cook Data journalist, privacy advocate and cord-cutting expert 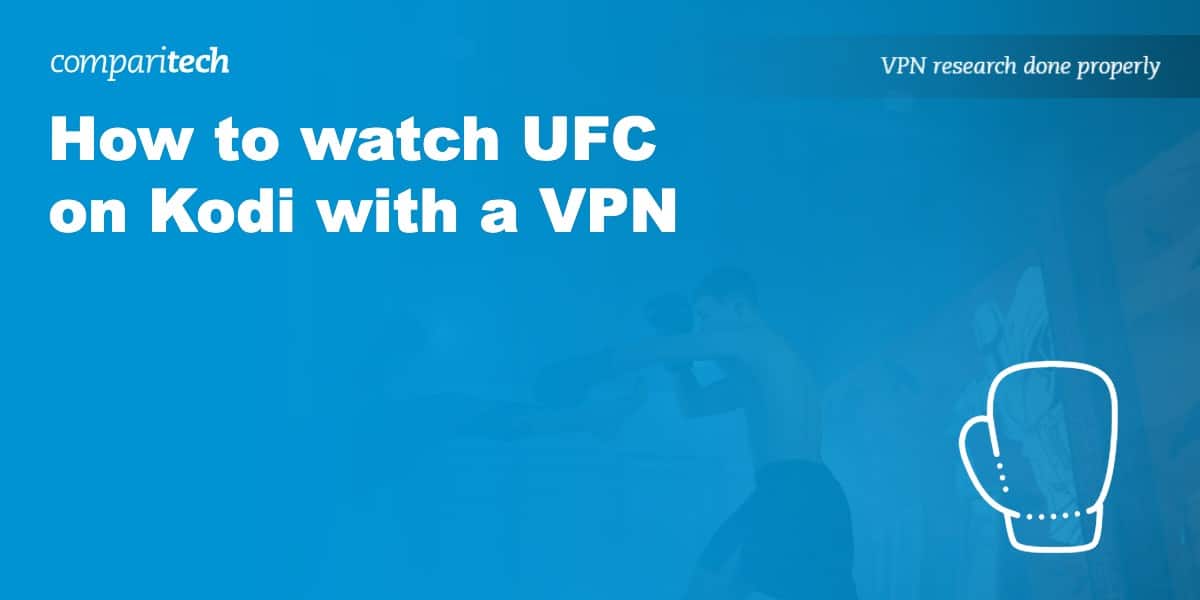 UFC is extremely popular but its apps leave a lot to be desired. This guide will show you how to watch UFC 281: Adesanya vs Pereira live via Kodi, which gives you a lot more control over your experience. What’s more, we’ll be providing a variety of sources so that you can quickly learn how to stream UFC both in the US and abroad.

UFC 281 will take place at 22:00 ET/PT on November 12. There are plenty of exciting matchups to look forward to, from Esparza vs Weili to the main event, Adesanya vs Pereira. Further, Brad Riddell will be on the preliminary card, and he’s always fun to watch.

Note that our guide will only provide information on legitimate Kodi streaming add-ons. Popular sporting events are often locked behind paywalls, including pay-per-view models. As a result, many users may try to turn to illegal streaming sources. However, such streams often have low overall quality, significant buffering, and reliability issues. They may even cut out during the fight! Many unlicensed streaming websites also contain malware. Official broadcasters will let you watch UFC without any of this risk, so there’s no need to turn to untrustworthy sources.

UFC main events aren’t usually free in the US, UK, Canada, or most other countries. That said, if you’re traveling abroad, you may be able to access the stream back home using a Virtual Private Network (VPN). In some cases, the entire event may even be free for you to watch.

READER DEAL:Save 60% on NordVPN for fast, private streaming on Kodi.

How to watch UFC 281 securely from abroad with a VPN

You can bypass UFC region locking and regain access to your usual streaming services abroad with a VPN. Follow these steps to watch UFC through Kodi from anywhere in the world.

NordVPN is offering a fully-featured risk-free 30 day trial if you sign up at this page. You can use the VPN rated #1 for UFC with no restrictions for a month - great if you need time to fully test it out for yourself!

Where can I watch UFC online? 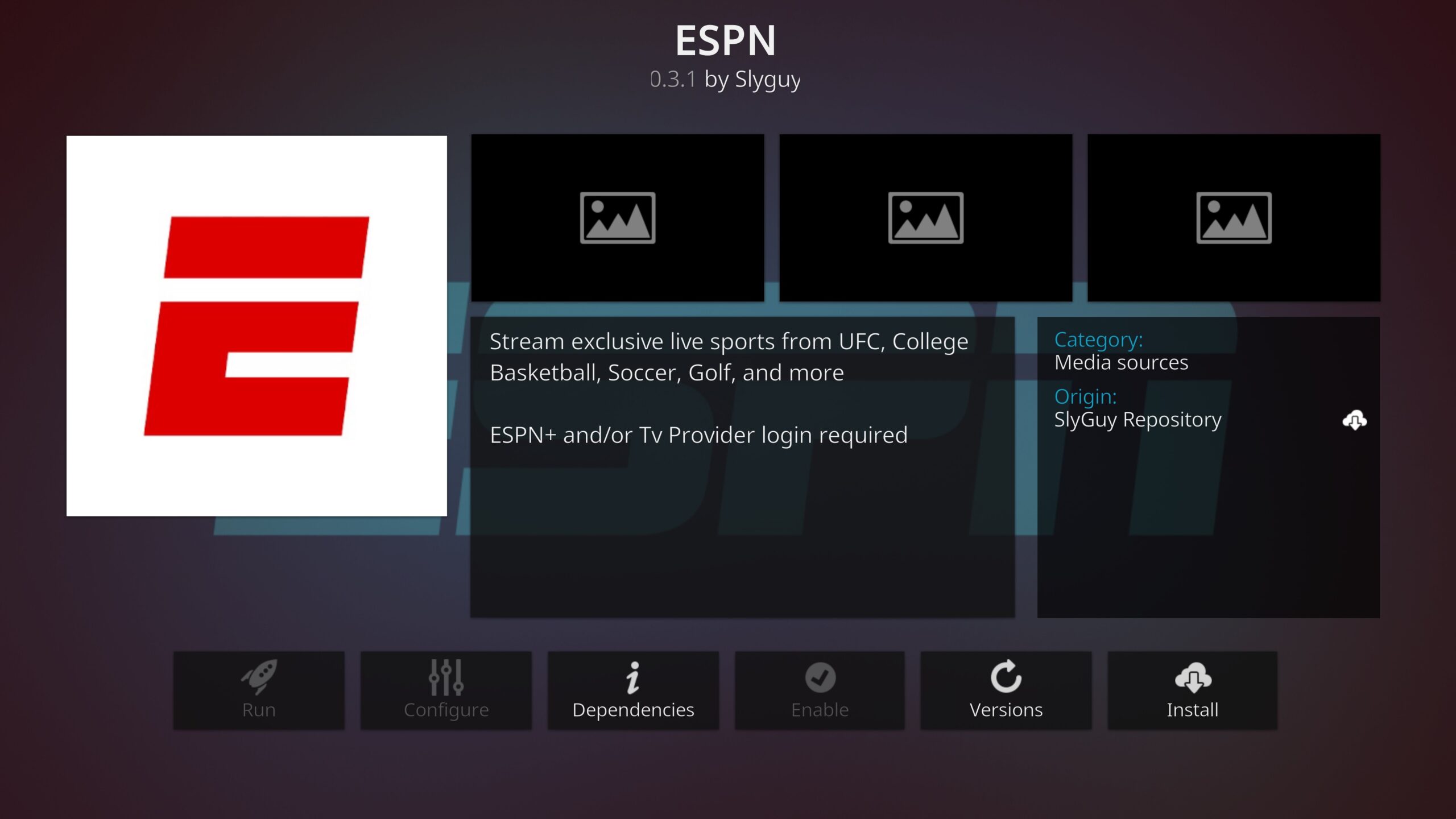 If you’re in the US, the best way to stream UFC 281 on Kodi is with the ESPN addon. This is available for both Kodi Leia and Matrix, and allows you to simply sign in with your cable provider details or an existing ESPN+ subscription.

However, as this is a pay-per-view event, you’ll also need a pass for UFC 281 itself. This is $74.99 USD for existing subscribers, or you can get a fight pass bundled with an annual ESPN+ subscription for $99.98.

The ESPN Kodi addon can be found in the SlyGuy repository.

How to install the DAZN Kodi addon (Kodi 18 only)

Here’s how to install the DAZN addon directly from the official Kodi addon repository (note this will only appear if you’re using Kodi 18):

As DAZN eliminated free trials in the US, this is no longer an option for US fight fans to get free access to main events. However, paying for a month of DAZN in the US and using a VPN is cheaper than paying for one individual PPV.

How to install the Sling TV Kodi Addon (Kodi 18 only) 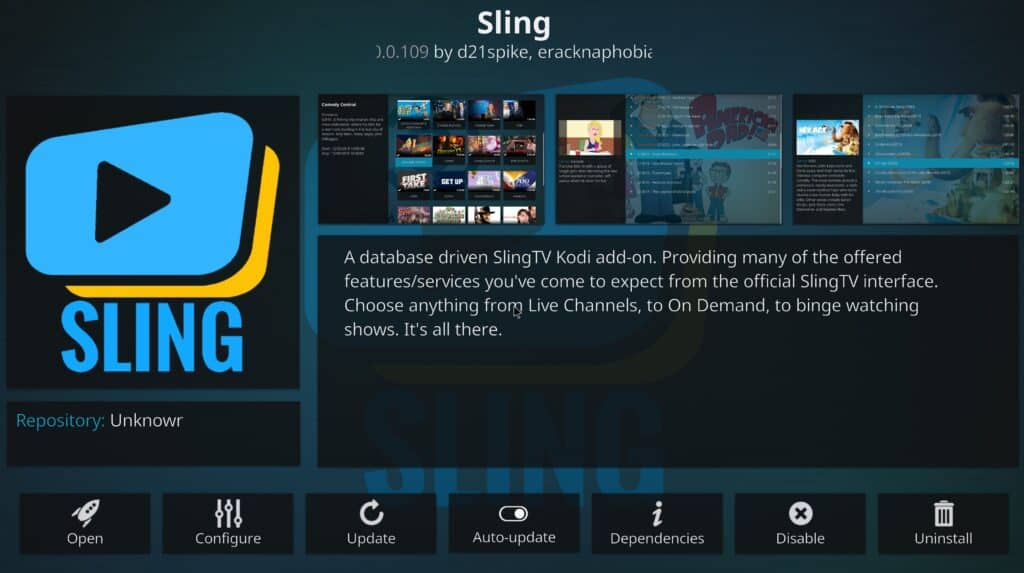 Preliminary fight cards are often broadcast on ESPN. Thankfully, that means you can sign up with Sling TV to get your first month at half off ($17.50) and watch the entire preliminary fight card. Sling TV is also one of the only live TV streaming services with an available Kodi 18 addon (made by the Kodi community and not endorsed or supported by Sling TV).

You can install this addon directly from the Official Kodi Addon Repository. Once you have it installed, log in with your introductory Sling TV account. You’ll need to subscribe to Sling Orange, which carries ESPN channels. Again, if you’re using Kodi 19, this addon will not show in the Kodi repo.

How to install the Kayo Sports Kodi addon 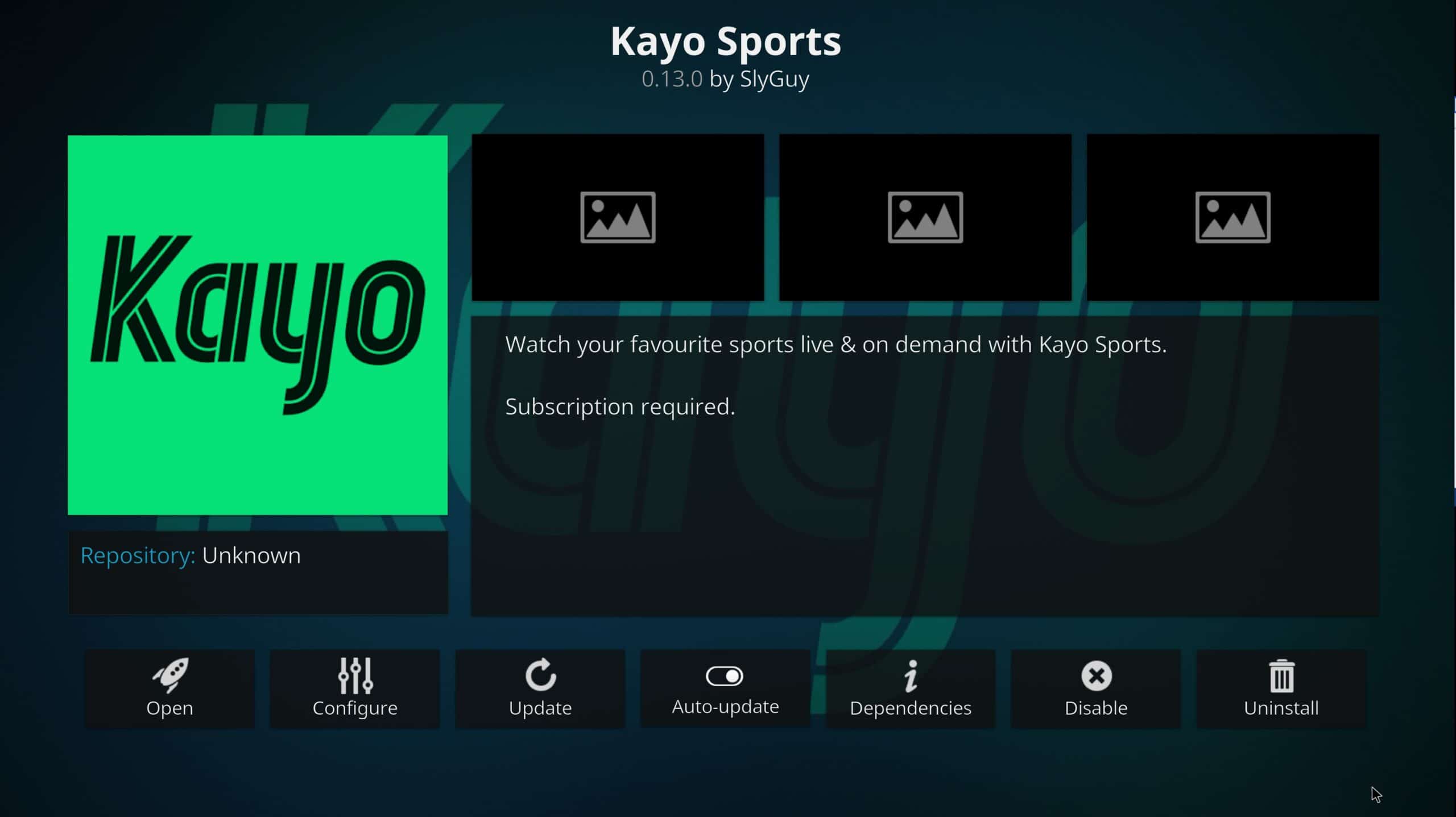 If you’re in Australia, you can stream UFC events using the Kayo Sports addon. This works with both Kodi 18 and 19, but only shows “full” UFC events, rather than their Fight Nights. Additionally, you can only watch replays with the regular subscription; to watch live, you’ll have to pay the full PPV price. Still, with Kayo offering a two-week free trial, it’s a good way to stream a few high-profile fights without paying a cent.

The Kayo Sports addon can be found in the SlyGuy repo.

Unfortunately, there’s no official BT Sports Kodi addon at the time of writing. As far as we’re aware, the only addons that claim to let you stream BT Sports live via Kodi use unlicensed streams, meaning they pull content from piracy sites.

We’ve said it many times before but it bears repeating: Kodi should only be used for content to which you have the legal right to access. Neither the Kodi Foundation nor Comparitech advocates the use of Kodi for piracy.

How to watch UFC 281: Adesanya vs Pereira on Firestick

Alternatively, many of the apps listed above have their own Firestick app. You could just install these directly, though Kodi gives you the option to look for subtitles, sync your watch history, and change various display settings.

UFC should be available in the US, UK, Australia, Germany, Canada, Italy, Spain, and many other locations abroad. With a VPN and UFC Fight Pass, you should be able to get access to most events, including the prelims, with the main events coming a few days later.

However, if you want to watch the fight outside of Kodi, there may be a few additional options, especially if you’re in the US. You may want to check out our regular streaming guide for how to watch UFC for more details on where and how to watch these events.

We strongly suggest running these setup instructions well in advance of when the main event starts. This way, if anything doesn’t work as expected, you’ll still have time to get help from your VPN’s customer support staff and might not have to miss any of the event.