DAZN is only available in a few countries so you'll need a VPN to watch DAZN abroad. Most won't work, but below, we reveal the best VPNs for DAZN.
Mark Gill TECH JOURNALIST, VPN AND PRIVACY SPECIALIST 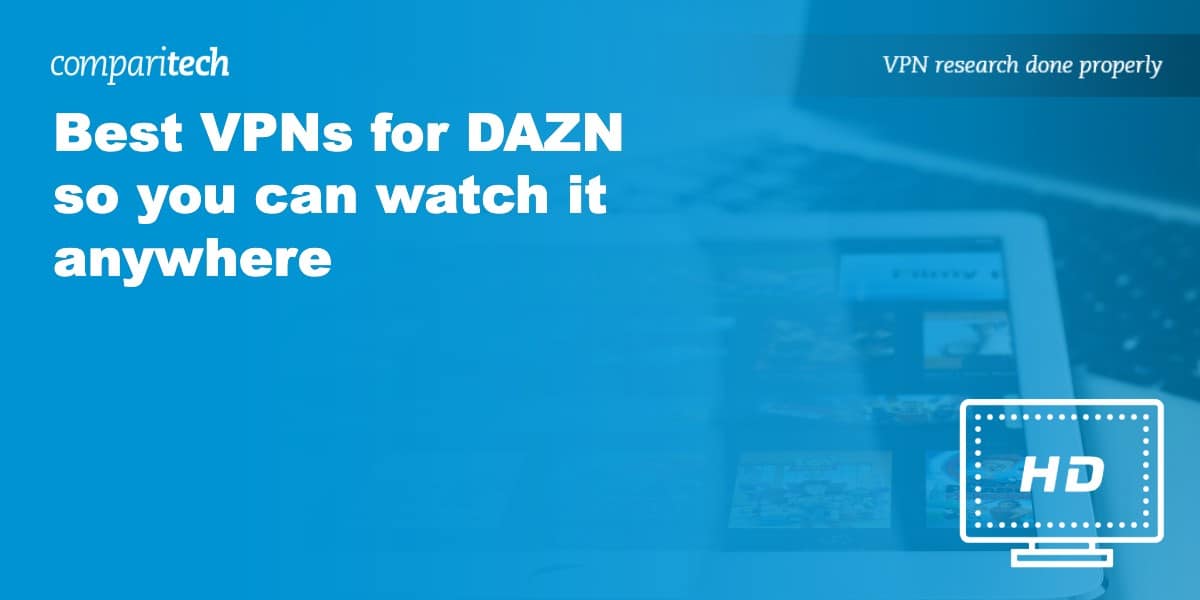 When it comes to DAZN, it’s not as simple as just picking any VPN on the market. That’s because DAZN is actively blocking many VPNs. In our testing, we only found four VPNs that unblocked DAZN. Most VPNs simply don’t work with this sports streaming service. For this reason, you may well come across the “DAZN isn’t available in this country” error, even with a VPN activated:

In case you were wondering, a VPN is a Virtual Private Network. Serving to hide your IP address, it allows you to explore the internet more securely while protecting your privacy and anonymity. Another advantage of using a VPN is that you can use it to watch geo-restricted content abroad on sites such as DAZN, Netflix, and BBC iPlayer.

NordVPN is offering a fully-featured risk-free 30-day trial if you sign up at this page. You can use the VPN rated #1 for DAZN without any restrictions for a month—great if you want to binge your favorite show or are going on a short trip.

There are no hidden terms to be aware of—just contact support within 30 days if you decide NordVPN isn't right for you and you'll get a full refund. Start your NordVPN trial here.

Since DAZN blocks VPNs, you may find it difficult to find a compatible one. Save some time and effort by taking a look at the best VPNs to watch DAZN abroad in 2021. We’ve already done all of the research and looked for VPNs that met the following criteria:

Best VPNs for DAZN – at a glance

We’ve compared the most important features for the top VPNs here. Prefer to read the in-depth reviews? Start with NordVPN – our #1 choice for DAZN.

NordVPN is our first choice. It now unblocks DAZN in three countries: the US, Canada, and Japan. The company operates thousands of servers in more than 60 countries. Speeds are blazing fast for streaming in HD, with no limits on bandwidth or data. It also works with other popular streaming services like Hulu, BBC iPlayer, and Amazon Prime Video from abroad.

Apps are available for Windows, macOS, iOS, Android, Linux, and Fire TV. You can connect up to six devices at once.

BEST VPN TO WATCH DAZN:NordVPN is our top recommendation. It’s a reliable option for watching DAZN US, Canada, and Japan. It comes with a 30-day money-back guarantee making it a risk-free deal.

Surfshark is a low-cost provider that has roughly 3,000 servers in over 60 countries, making it a strong choice for anyone looking to use region-locked services abroad. You can use it to access DAZN Canada, Spain, Japan, and Germany. Plus, this VPN lets you securely access platforms like Netflix US, BBC iPlayer, and Sling TV. As there’s no connection limit, Surfshark is ideal for people with lots of devices or those looking to share their account with family.

The service comes with plenty of advanced security features. There’s 256-bit encryption, protection against DNS, IPv6, and WebRTC leaks, and a kill switch for starters, but users can also block ads and malware automatically. There’s even a NoBorders feature that lets you bypass country-wide internet restrictions. Surfshark doesn’t log any information that could identify you. While its apps are very user-friendly, Surfshark offers 24/7 support over live chat.

Surfshark has apps for Android, iOS, Windows, macOS, and Linux. It also works with wireless routers although manual configuration is required.

BEST BUDGET OPTION:Surfshark offers decent speeds, powerful security and privacy protections, and the ability to safely stream DAZN on whichever device you like. This service includes a 30-day money-back guarantee.

ExpressVPN enabled us to watch DAZN USA, Canada, Italy, Spain, Japan, and Germany. Overall, ExpressVPN has more than 3,000 servers in 94 countries so you’re never short of options when it comes to streaming DAZN, Netflix or Amazon Prime Video, for example. Streaming performance is always very consistent with minimal buffering and no lag.

ExpressVPN includes security features such as 256-bit AES encryption, DNS leak protection, and a kill switch. What’s more, ExpressVPN is based in the British Virgin Islands (no data retention laws) and keeps no activity or connection logs of its users.

ExpressVPN is available for Windows, macOS, Android, iOS, and Linux as well as routers. Browser extensions are available for Chrome, Firefox and Safari.

WATCH DAZN ABROAD:ExpressVPN is another solid choice. It has fast servers for streaming DAZN as well as Netflix. Offers strong security, protecting your data with encryption. Offers excellent apps and 24/7 live chat support. You can try it with the 30-day money-back guarantee.

PrivateVPN may be a smaller VPN with around 200 servers, but this network is spread across 63 countries. What’s more, PrivateVPN has servers in Toronto and Vancouver, Canada that can stream DAZN abroad. What’s most impressive about this Sweden-based VPN is the high quality streaming it offers. We’ve found PrivateVPN streaming to be very fast and with unlimited bandwidth and speed, you’re unlikely to encounter annoying buffering.

We appreciated the simplicity of the PrivateVPN app, which makes it particularly suitable for beginners. A single PrivateVPN account allows you to protect up to 10 devices simultaneously, which we feel offers very good value. In terms of security, PrivateVPN states that it has a zero data logging policy, protecting your privacy. Also important is the 256-bit AES encryption, DNS leak protection, and a kill switch that prevents your IP address from being leaked even if the VPN connection drops.

Methodology: How we chose the best VPNs for DAZN

DAZN has particularly strong regional restrictions, so not every VPN will be able to access it. Even ignoring this issue, there are plenty of providers that are too slow, insecure, or inconsistent to provide a good viewing experience. That’s why we’ve put together a list of strict requirements that the best  VPNs for DAZN must meet, and you’ll find this below:

The services we recommend undergo extensive testing. You can learn more in our full VPN testing post.

DAZN is blocking the IP addresses of many VPNs, making it more difficult to unblock this sports streaming service abroad. Here's a list of some of the VPNs that don't currently work with DAZN:

Is watching DAZN with a VPN illegal?

No, it's not illegal to watch DAZN with a VPN. However, it does go against the streaming service's Terms of Use. DAZN has very strict anti-VPN measures in place to ensure it complies with copyright and licensing agreements. If you're found to be using a VPN with DAZN, the worst that's likely to happen is that the IP address becomes blacklisted. Should this happen, you'd simply connect to a different server to try another IP address.

Will a DAZN VPN slow my connection down?

It's normal for a VPN to slow your connection somewhat. That's because the data traveling from your device to DAZN has to go to a VPN server first. However, the fastest VPNs on the market let you stream DAZN in high resolution without lag. Furthermore, they provide unlimited bandwidth so you may experience faster speeds if your ISP is throttling your connection.