Want to access DAZN via Kodi? We'll explain where to find the DAZN Kodi addon, how to configure it, and which other sports streaming addons are worth your time.
Tom Blackstone Kodi and streaming expert The DAZN Kodi addon is an affordable option to watch sports programming without cable TV, at least for those who are able to access it. Depending on the country the user signs up from, it offers a wide variety of sports: Premier League matches, World Cup highlights, NBA games, Major League Baseball,  NFL, NHL, and more. You can easily install DAZN on Kodi and stream in Germany, Canada, Japan, and elsewhere in the world, and we’re about to explain how.

DAZN’s price varies pretty wildly depending on where you live. For instance, subscribers in the US pay $19.99 USD per month while those in Germany have to fork over €29.99 per month (which is almost $30 USD). Today, we’ll help you install the DAZN Kodi addon. We’ll also cover reasons why some users can’t connect to DAZN and suggest alternative addons anyone can use to still get great sports programming.

Why use DAZN on Kodi?

Kodi is known for being extremely portable and customizable. If you’re the type of person who likes to stream across multiple devices (for instance, Amazon Fire TV, Nvidia Shield, or Apple TV) or display information while streaming sports, it might be just what you need. Best of all, Kodi is completely free to use.

Some Kodi users employ third-party addons to stream unlicensed videos. However, there are many legitimate video-streaming sites that Kodi can be used to access, including the DAZN addon discussed in this article. Kodi should only be used for content to which you have the legal right to access. Neither the Kodi Foundation nor Comparitech advocates the use of Kodi for piracy.

Did you know that your internet service provider can see everything you get up to online? This includes which sites you visit, how long you spend there, and what activities you get up to (streaming, torrenting, etc). Some providers even reduce the speeds of users who stream often, a process known as bandwidth throttling.

A Virtual Private Network (VPN) can help by encrypting your data, preventing anyone (including your ISP) from monitoring your online activities. This not only improves your privacy, it also means that you’re much less likely to notice any throttling since your service provider can’t say for sure whether you’re streaming or not.

NordVPN is fast enough to handle multiple 4K streams at a time, and it boasts a top-tier set of security and privacy tools. In fact, it refuses to keep any logs at all. Better still, this VPN has apps for Amazon Fire and Nvidia Shield.

How to install DAZN Kodi addon

Kodi is now included in the official Kodi repo which means it’s significantly easier to install than before. However, it hasn’t yet been updated to work with Kodi 19 (Matrix), so for now, you’ll need an older version of Kodi to run it. Don’t worry: we’ll explain how to get one below:

There are actually quite a few reasons why you might run into difficulty when using DAZN. If you’re having trouble, check to see if you fall into one of these categories.

You’re using an outdated version of the DAZN addon

Kodi addons are updated frequently, and using an older version could see some functionality break. The solution to this is simple, though: just right-click the DAZN addon, hit Update, and try again.

Even if you have a German credit card, you can’t use your German DAZN account to access the Canadian or Japanese versions of the site. Unfortunately, using a VPN to hide your location does not fix this problem because the site will ask you for your login info, and that info will be tied to the country you signed up in.

DAZN has detected that you’re using a VPN

DAZN is region-locked, meaning its content changes from one location to another. In an attempt to prevent users from switching regions, it has employed very powerful VPN-detection techniques. The end result is that users may only be able to access select libraries, even with a VPN that works for most other sites.

This means that many people cannot use VPNs to protect themselves from MiTM attacks and ISP speed throttling while watching DAZN. We think this is a major flaw in the DAZN service itself and is a factor you should consider when deciding whether to sign up for it.

If you can’t access DAZN because you don’t live in one of the countries it’s available in, or if you live in Canada and don’t want to use it because it blocks VPNs, here are some alternative Kodi addons you can use to get sports programming. 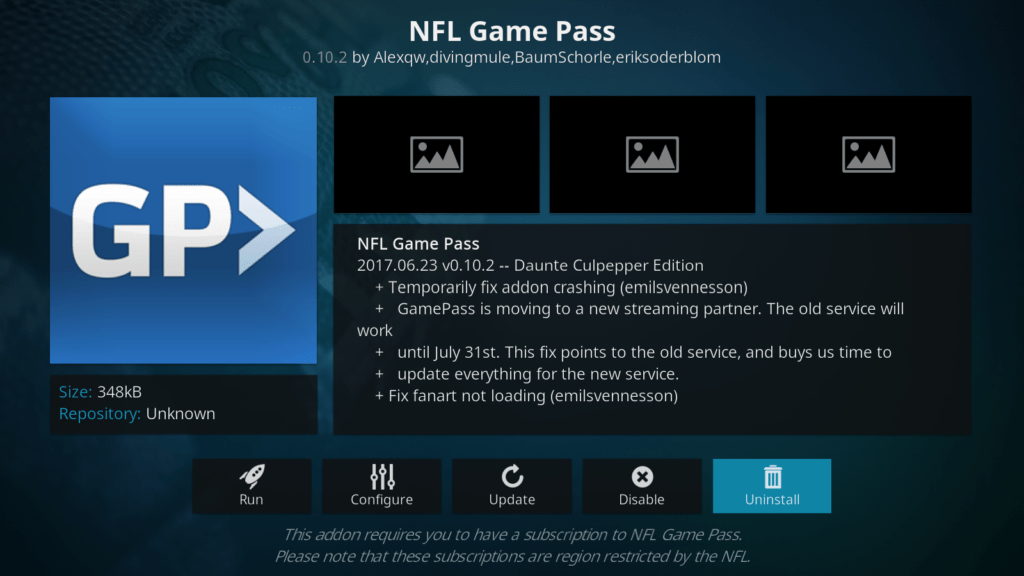 If you live in the U.S. or Europe and want to watch NFL matches, you can subscribe to NFL Game Pass directly and use the service’s Kodi addon to access it. The US version shows games on a time-delayed basis. If a game happens in the morning, it is available that evening. If a game happens at night, it is available immediately after it ends. The European version shows NFL games live just like they would be shown on DAZN. 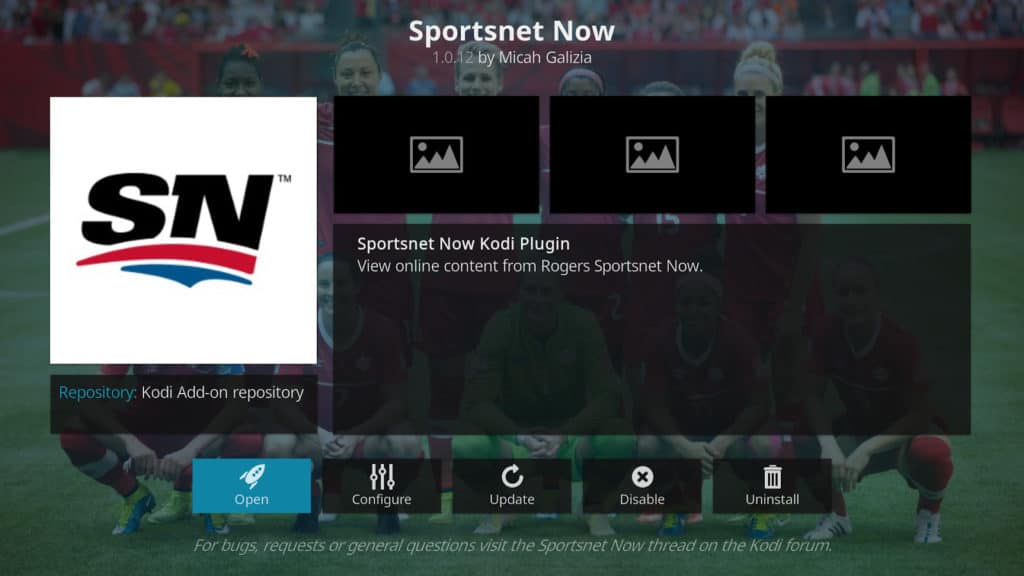 If you live in Canada, you can see many NHL, NBA, and Premier League matches on SportsNet Now. There are some NFL matches as well, but not as many as on DAZN. If you are interested in basketball or baseball, SportsNet Now is a great alternative to DAZN.

The Pluto.tv Kodi addon gives you access to the entire free TV options available through the titular service. Pluto.tv is a free, live TV streaming service. All of the options provided by Pluto.tv are completely free to access. You can create and sign into a Pluto.tv account, but this is not necessary to view the content.

Among the many options available through Pluto.tv, you’ll find a sports section that contains a decent selection. While you won’t find the big sports here, you will find MMA, kickboxing, poker and other alternative sports options. If you’re outside of the U.S., you can still access Pluto.tv using a VPN.

Pluto.tv is available in the official Kodi addon repository.

DAZN has quickly become of the biggest sports streaming services around thanks to its rapid international expansion and deep pockets that allow it to snap up exclusive broadcast rights. The exact content on offer changes from one country to another but DAZN shows the following in at least one region:

Is it legal to watch DAZN on Kodi?

Kodi is just media center software. Further, its official repo only includes addons that use properly licensed sources. As such, there's no reason you should get into trouble simply for using the app as it's intended.

That said, there are plenty of piracy-focused addons around. These might claim to offer access to all kinds of newly-released movies and every sports channel imaginable, but they have been a blight on the Kodi community and have seen developers repeatedly targeted by lawsuits. Even putting these issues aside, piracy addons frequently break or disappear, so they're not worth using.

Does DAZN offer a free trial?

Unfortunately, while DAZN did offer a free trial for a while, this is no longer the case. What's more, the service is slowly increasing prices as it expands, with some subscribers now having to pay almost double what the price was at launch.