Throughput vs Bandwidth: Understanding the Difference Plus Tools 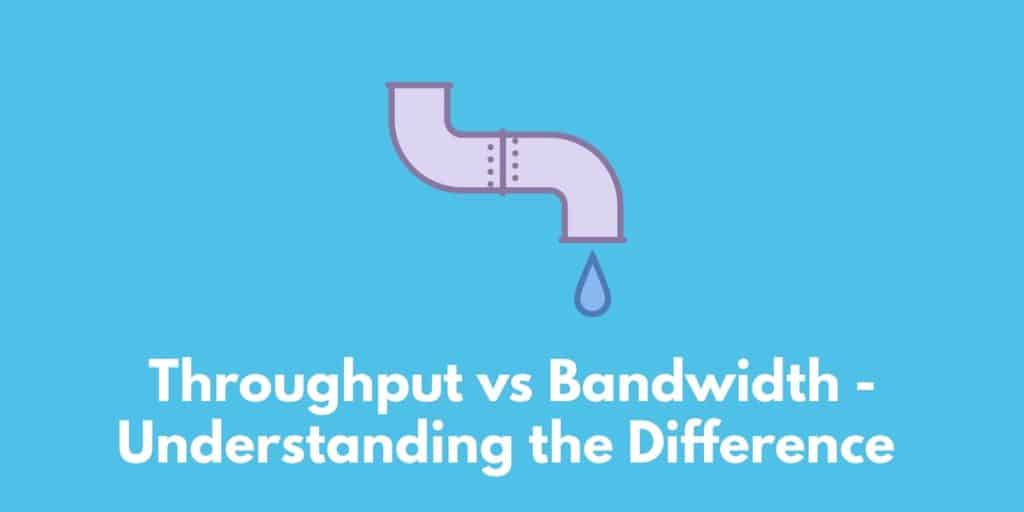 Few factors are as important when measuring network performance as speed. The speed at which packets travel from sender to recipient determines how much information can be sent within a given time frame. Low network speed leads to a slow network with applications that move at a snail’s pace.

In brief, throughput is a term used for how much data can be transferred from the source to its destination within a given time frame, while bandwidth is the term used for the maximum transfer capacity of a network.

We’re going to look at these two concepts in further detail below.

Throughput is the name given to the amount of data that can be sent and received within a specific timeframe.

In order to have a high-performance service packets need to reach their destination successfully. If lots of packets are being lost in transit and therefore are unsuccessful, then the performance of the network will be poor. Monitoring network throughput is crucial for organizations looking to monitor the real-time performance of their network and successful packet delivery.

Bandwidth is a measure of how much data can be sent and received at a time. The higher the bandwidth a network has, the more data it can send back and forth. The term bandwidth isn’t used to measure speed but rather to measure capacity.

The key thing to remember about bandwidth is that having a high bandwidth doesn’t guarantee high network performance. If throughput in the network is being affected by network latency, packet loss, and jitter then your service will see delays even if you have a substantial amount of bandwidth available.

On the surface bandwidth and throughput appear to be similar but they couldn’t be further apart in practice. The most common analogy used to describe the relationship between the two is to consider bandwidth as a pipe and throughput as water. The larger the pipe or bandwidth is, the more water or data can flow through it at one time.

Although throughput is the better term to measure network performance, this doesn’t mean that bandwidth doesn’t have any influence on performance. For instance, bandwidth has a significant influence on how fast a web page will load on a browser. So if you were looking to use web hosting for an application the amount of bandwidth you have available would impact the performance of certain services.

A common misconception is that bandwidth can be used as a measure of speed. We have discussed this briefly above but it is worth revisiting because of how commonly the two are mixed up. For instance, you’ll often see Internet Service Providers advertising high-speed services that are marketed as being due to the amount of maximum bandwidth you have available.

This makes for good marketing but it isn’t correct. If you increase the amount of bandwidth the only thing that changes is that more data can be sent at one time. Being able to send more data at once appears to make the network faster but it doesn’t change the actual speed at which the packets are traveling.

The truth is bandwidth is just one of a multitude of factors that tie into the speed of a network. Within a network, speed is a measure of response time. Factors like packet loss and latency impact speed.

Bandwidth and latency are also discussed together regularly but each has its own unique meaning. We’ve already established that bandwidth is the capacity of the network or how much data can be transferred in a window of time. Latency is simply the amount of time that it takes for data to travel from a sender to its destination.

The relationship between the two is close, as bandwidth determines how much data can theoretically be sent and received at one time. However, latency determines how fast these packets actually reach their destination. Minimizing latency is important for keeping the network moving as fast as possible.

Monitoring Network Performance with Throughput (Including Latency and Packet Loss)

If you were looking to measure network performance it makes more sense to use network throughput rather than looking at capacity with bandwidth. Network administrators have a number of ways that they can use to measure for poor performance within an enterprise-grade network.

Using throughput to measure network performance is useful when troubleshooting because it helps administrators to pinpoint the root cause of a slow network. However, it is just one of the three factors that determine network performance. The other two are latency and packet loss:

Measuring these three together provides administrators with a much more complete perspective of the network’s performance.

Tools for Monitoring Throughput and Performance

What should you look for in tools to measure throughput and bandwidth?

We reviewed the market for bandwidth monitoring software and analyzed the options based on the following criteria: 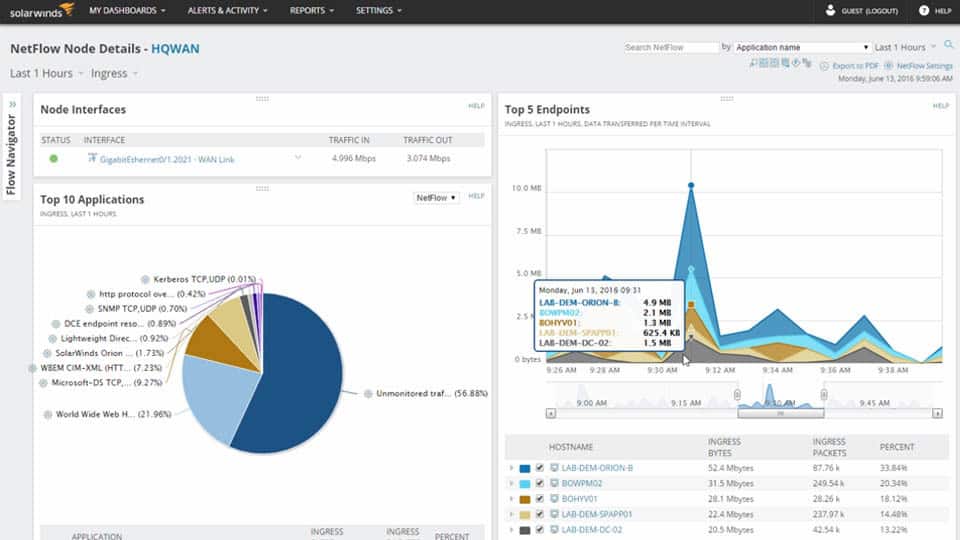 SolarWinds Network Bandwidth Analyzer Pack is a product that can accurately measure the throughput of your network. You can view throughput flow data alongside monitoring bandwidth with SNMP. There is also a network throughput test that can be mixed with pre and post-QoS policy maps to show if your QoS policy is improving the performance of the network over time.

See also: What is QOS 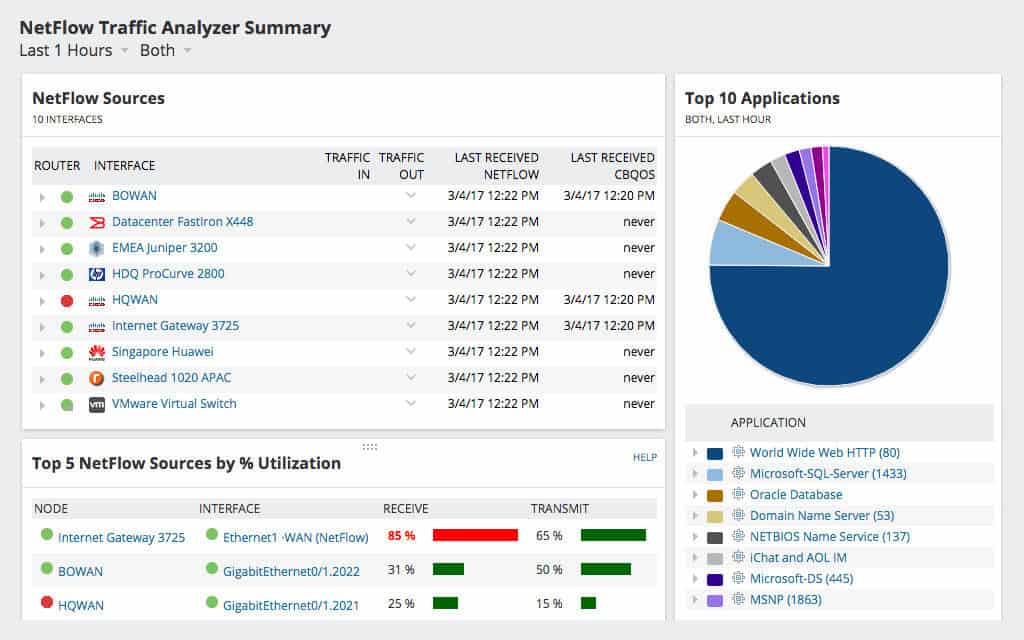 Once you know which tools are consuming a disproportionate amount of bandwidth within your network you can look for ways to reduce the problem and provide other devices with more service. This will increase the amount of your bandwidth capacity available to other devices.

Also, the free SolarWinds Flow Tool Bundle is a useful addition to your analysis armory. The pack includes an interface that helps you to configure your Cisco routers to send NetFlow data to your collector. Two more utilities enable you to circulate traffic data around the network for testing purposes and also generate traffic to examine the performance of your equipment and network services in the face of extra demand. 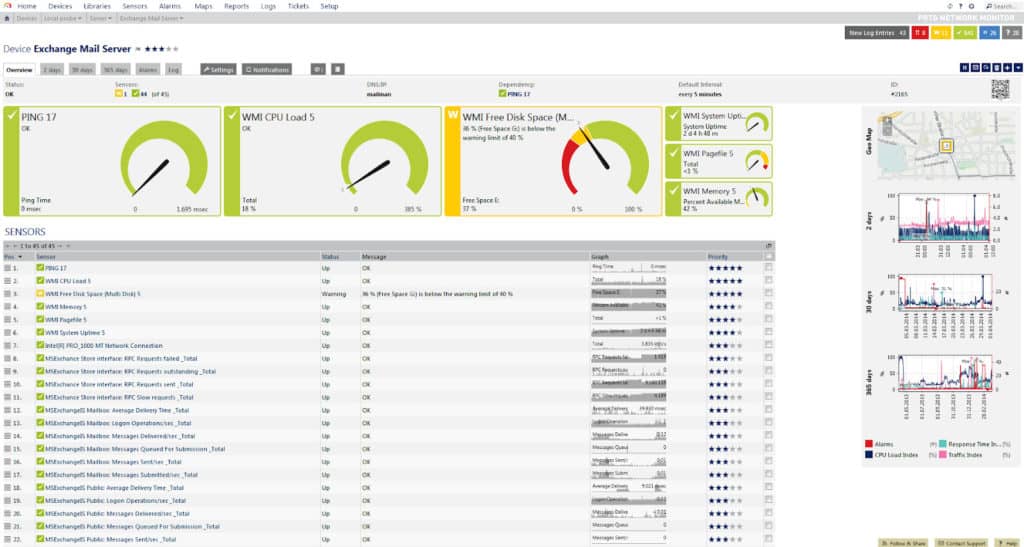 PRTG Network Monitor also helps you to deal with bandwidth hogs so that you can see how much bandwidth is being consumed by individual devices and applications. This ensures that your network is optimized for every device and that you don’t have a few services slowing your connectivity down to a crawl.

How to Optimize Network Bandwidth

Though bandwidth isn’t the same thing as speed, having poorly-optimized network bandwidth can have a negative impact on the performance of the network and produce a subpar user experience on many applications. In this section we’re going to look at how you can make sure that your bandwidth is optimized:

Organizations commonly implement QoS or Quality of Service settings to help the network to support mission-critical applications. With QoS settings, you can set network traffic policies to prioritize certain types of traffic so that high-maintenance applications have all the bandwidth they need to perform well.

For example, if you were running a VoIP phone system you could set QoS settings to prioritize voice traffic. By prioritizing voice traffic you would make sure that end users have the best user experience possible as voice packets would take priority over less important forms of traffic.

Sometimes the easiest way to improve network optimization is to deploy applications in the cloud. By using public and private clouds you offload the pressure of maintaining that traffic within your own network. By letting a third-party company deal with the performance of these applications you reduce your monitoring burdens and can also increase the performance of your regularly-used applications.

Even in the most productive environments, it can be surprising how much non-essential traffic crops up on networks. It is not uncommon to find employees browsing on YouTube or streaming films on Netflix! Tightening up your internal policies to block this traffic can help to make sure that bandwidth isn’t being wasted on applications irrelevant to daily operations.

Do Backups and Updates Outside of Peak Hours

There are many instances where organizations put a strain on bandwidth by undergoing massive network backups and updates in the middle of the day. These software updates can have a substantial impact on the bandwidth availability of the network. This results in real-time latency and poor performance for users.

How to Optimize Network Throughput

The most common cause of latency is other users on the network. If employees are using traffic-intensive tools or applications then the performance of the network can slow dramatically, particularly if the individual is conducting downloads. Monitoring endpoint usage can allow you to find when employees are causing latency with applications that may or may not be related to work.

Using a network monitoring tool like SolarWinds Network Performance Monitor or Paessler PRTG Network Monitor can show you those devices that are eating up the available data. Once you’ve done so you can take action to get rid of them completely.

Addressing network bottlenecks can be done a number of ways starting with upgrading a router or switch to keep up with the traffic levels. Another way is to reduce the overall number of nodes (this will shorten the amount of distance that packets have to travel and reduce congestion).

Throughput and bandwidth are two different concepts but they still have a close relationship with each other. Paying attention to both will help to make sure that your network holds the best performance possible. Remember that bandwidth is the pipe of theoretical transfer capacity whereas throughput is the water that tells you the rate of successful packet delivery.

Monitoring bandwidth usage and throughput together will provide you with the most comprehensive view of your network performance. Combining the two can allow you to make sure that your allocated bandwidth is being used optimally and allows you to confront performance issues like packet loss head on.

What is the difference between delay and latency?

What is the difference between throughput and goodput?

Throughput refers to all of the traffic that crosses a network. Goodput only measures the packets that actually carry data. For example, a TCP connection requires session establishment exchanges and TLS-protected transfers require even more pre-amble traffic. That is included in throughput calculations but not goodput. Retransmissions are also included in throughput but not goodput.

What is the difference between throughput and bit rate?

The bit rate is the number of bits that are transmitted per second. Throughput is the achieved useful data transfer bit rate. The only difference between the two measurements is that throughput excludes data-link layer overhead.

Why does throughput of data diminish so much with distance?

Typically, networks maximize value for money by creating common links that channel data to and from several endpoints or connecting links through switches and routers. The further a signal has to travel, the more network devices it has to pass through, each device introduces a slight delay because it has to copy data arriving in on one port over to an outgoing port. So, the more links that need to be crossed, the longer it will take the transmission.

Long-distance wires that don’t have to serve branch connections also face speed problems. Data travels over a wire as an electronic pulse. Although an electric charge possesses all of the wire instantaneously, a longer wire is more susceptible to environmental interference because it has a larger surface area and there is more surrounding space filled with conflicting noise. As a result, there is a limit to the distance that a transmission medium can usefully carry a signal. The distance is longer depending on the quality of the medium. Long stretches require repeaters, which remove noise and boost the signal. A repeater introduces delay, so a long distance transmission passes through more repeaters, reducing throughput.