What is QoS in networking? Plus how to monitor QOS

What is QoS? In this article we walk you through QoS in networking and review the best tools for the task. We also look at how to best configure your QoS and what you shouldn’t use it for.
Liku Zelleke Network configuration, optimization, and security expert 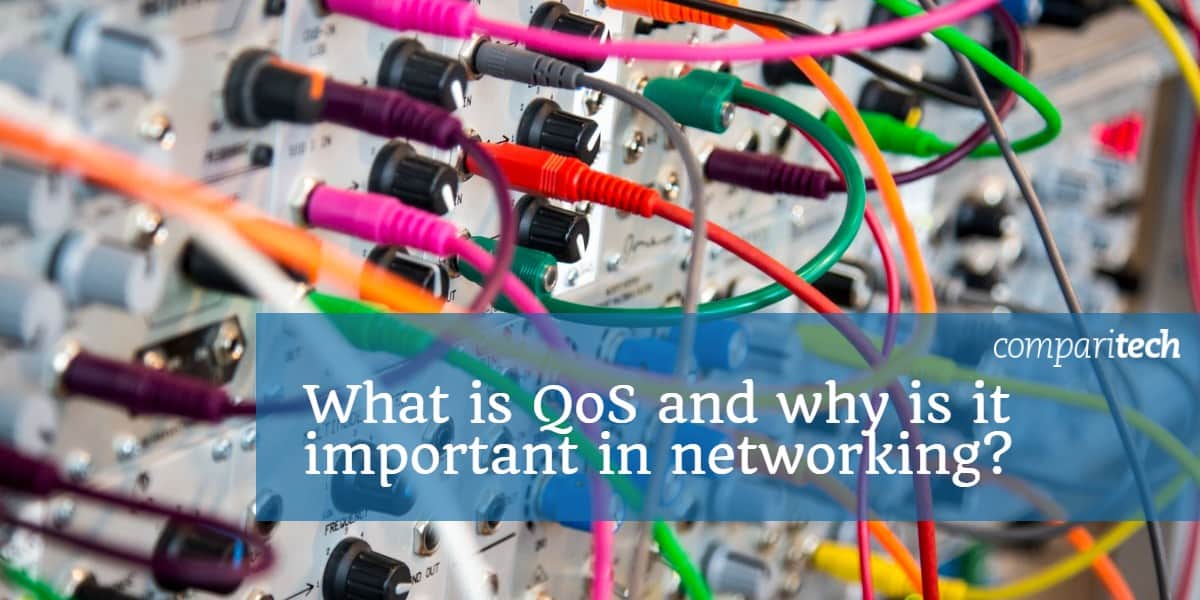 What is QoS in networking?

QoS or Quality of Service in networking is the process of managing network resources to reduce packet loss as well as lower network jitter and latency. QoS technology can manage resources by assigning the various types of network data different priority levels.

QoS is usually applied on networks that cater to traffic that carry resource-intensive data like:

These sorts of data need to be transmitted in the shortest amount of time to be consumable at the receiving end.

To make things a bit clearer, let us take a real-world example of a traffic jam on a highway at rush hour. All the drivers sitting in the middle of the jam have one plan – make it to their final destinations. And so, at snail’s pace, they keep moving along.

Then the sound of an ambulance’s siren alerts them to a vehicle that needs to get to its destination more urgently – and ahead of them. And so, the drivers move out of what now becomes the ambulance’s “priority queue”, and let it pass.

Similarly, when a network transports data, it too has a setup where some sort of data is treated preferably over all the others. The packets of important data need to reach their destinations much quicker than the rest of them because they are time-sensitive and will “expire” if they don’t make it on time.

Why does network QoS matter?

Once upon a time, a business’ network and communication networks were separate entities. The phone calls and teleconferences were usually handled by an RJ11-connected network; the calls were monitored by a PABX system. It ran separately from the RJ45-connected IP network that linked laptops, desktops, and servers. The two network types rarely crossed paths unless, for example, a computer needed a telephone line to connect to the internet. An example of such a network would look like: 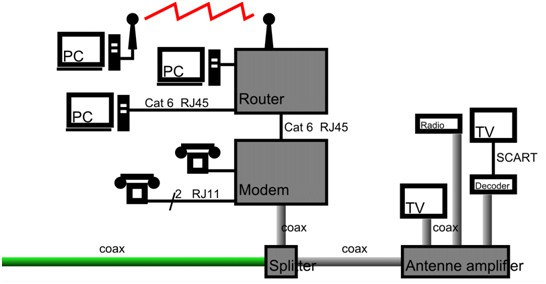 When networks carried only data, speed was not so critical. Today, interactive applications that carry audio and video have to be delivered across networks at high speeds and without packet loss or variations in delivery speeds.

People now make business calls using video-conferencing applications like Skype, Zoom, and GoToMeeting, which use the IP transport protocol to send and receive video and audio messages. In the interests of speeds, these critical applications do without the transport management procedures that standard data transfers typically use.

Before we move any further into the topic of QoS, we need to talk about RTP.

The Real-Time Transport Protocol or RTP is an internet protocol standard that stipulates ways for applications to manage their real-time transmissions of multimedia data. The protocol covers both unicast (one-to-one) and multicast (one-to-many) communications.

RTP is more commonly used in internet telephony communications where it handles the real-time transmissions of audiovisual data.

While RTP doesn’t in itself guarantee the delivery of the data packets – that task is handled by switches and routers – it does facilitate managing them once they arrive in the networking devices.

QoS is a hop-by-hop transport configuration implemented on the networking devices to make them identify and prioritize RTP packets. Every enabled device between the sender and recipient(s) should also be configured to understand that the packet is a “VIP” one and needs to be pushed along in the priority lane. If even one of the network devices in the relay isn’t configured right, QoS won’t work. The packets will lose their priority and slow down to that device’s data transmission speed.

What happens if we don’t use QoS in networking?

Not having a correctly configured QoS could result in one (or all) of the following issues:

In all the cases we have just seen, QoS can help by sorting the data out, managing the queues, and preventing data loss.

It doesn’t take much imagination to see how communication and media transfer or streaming could be badly affected when we opt out of using QoS – especially on networks that cater to RTP protocols. Even if it were perfectly designed, eventually, the communication will first become difficult, then deteriorate as the network traffic grows, and finally become impossible.

The three faults – latency, jitter, and packet loss – are, in fact, so critical in determining how well an implementation is working that QoS and network monitoring software manufacturing companies like SolarWinds use them as metrics to measure the quality of RTP-based traffic. 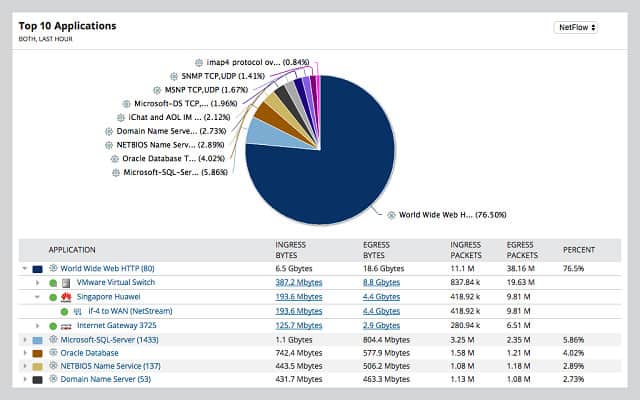 It would be quite unfair to continue without mentioning a little bit more about one of the best network monitoring tools out there: SolarWinds NetFlow Traffic Analyzer.

This suite of network monitoring applications helps address issues that could be caused by:

Armed with the NetFlow Traffic Analyzer, network administrators will be able to get rid of the problems we have just seen by: 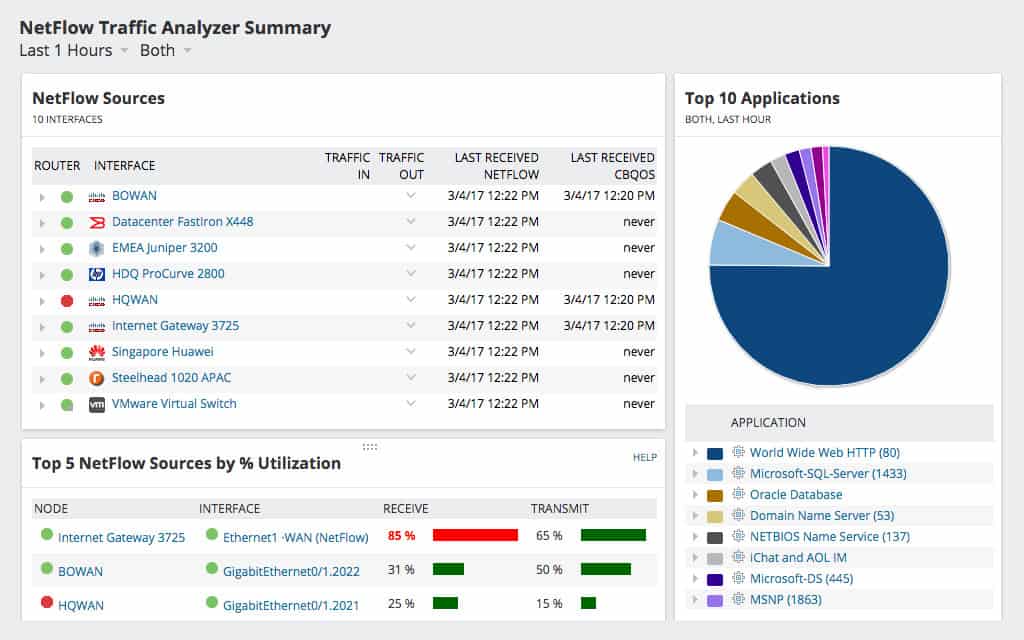 These reports and analytics include: latency, jitter, and packet loss.

Another option that you could investigate for QoS monitoring is Paessler PRTG. This network monitoring suite has a special section that tracks QoS performance. This function shows you tagged traffic flows in real-time and it also stores data for performance analysis and capacity planning.

The PRTG software includes four tracking sensors that cover three different QoS methodologies. These are complemented by a Ping Jitter sensor that tracks the regularity of packet delivery in a stream.

The three types of QoS that PRTG can track are standard QoS, Cisco IP-SLA, and Cisco CBQoS. The trackers of standard QoS is implemented as a one-way sensor or a roundtrip sensor. These trackers can operate on connections across the internet. In order to get an accurate record of performance at the destination, you need to place a sensor at that remote location for the one-way sensor service. The roundtrip service requires a reflector at the remote location in order to function. 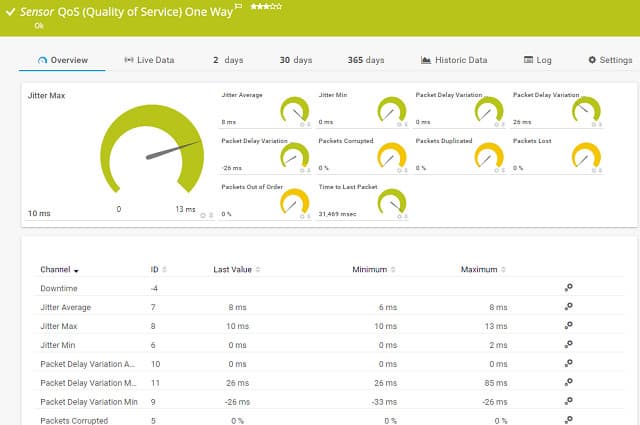 The Cisco IP-SLA sensor is dedicated to monitoring tagged VoIP traffic on your network. It logs a range of metrics for voice traffic including roundtrip time, latency, jitter, delays and the Mean Opinion Score (MOS).

The Cisco CBQoS sensor follows Class-based Quality of Service implementations. CBQoS is a queuing methodology and if you want to implement it, you are going to have to keep track of more entry points to your routers and switches. You create at least three virtual queues for each device, so there is much more to monitor.

PRTG is able to set itself up and map all of your network infrastructure automatically. However, QoS implementations require decision making, so you are going to have to set up the method yourself by deciding which types of network traffic to prioritize.

Paessler lets you use PRTG for free if you only activate a maximum of 100 sensors. If you go larger, you can get a 30-day free trial of the system, including the QoS monitor.

How do you configure your QoS?

Cable routers and switches that can be configured to prioritize protocols are usually accessed by router management software suites. The whole process of configuring your QoS preference is a pretty straightforward affair that involves:

And just like that, media packets will be able to traverse networks smoothly. Hardcore network engineers can do all of the tasks listed above via command line configuration interfaces.

How are RTP packets prioritized?

An important thing that needs to be remembered here is that a packet’s priority markings are only valid within the network it has been created in. Once it leaves the network, the owners of the recipient network will determine its new priority.

Thoughts to consider when prioritizing packets

Some thoughts and tips that can help when deciding how to prioritize packets include: 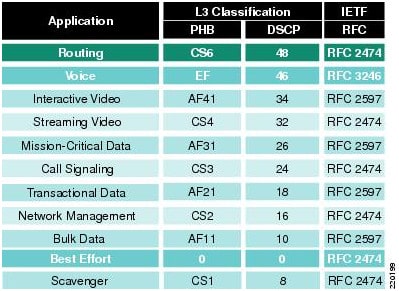 What not to use QoS for

After reading about QoS it might appear to be a magic elixir that can cure all ailments that cause network congestion. Well, to a certain extent, it can make most RTP communications smoother and make it appear as though it has streamlined the traffic on a network. Unfortunately, it isn’t an all-around solution for every network problem.

QoS should never be used for the following purposes:

Although QoS helps to streamline the priority of RTP packets and make it look like the network suddenly increased its bandwidth, it should never be construed as such. QoS should never be used as a tool to “increase bandwidth” when all it does is utilize the existing resources a little more efficiently (and in favor of the RTP packets).

Instead, consider looking into caching of files to decrease the amount of data that comes and goes. If that doesn’t work, then it could mean the prescribed bandwidth limits have been reached. When a company reaches its broadband limits, the only viable thing to do is to go out and buy some more of it – not use QoS.

If rogue applications are left to run and they end up hogging a network’s bandwidth, implementing QoS is not the solution. While Skype calls might finally start to go through, QoS will not have addressed the root problem. Eventually, the rogue applications will swallow up whatever resources may be available, exhausting the benefits of QoS.

One solution that could work here would be to hunt down the resource-hogging applications and either shut them down or reschedule them to run during after hours.

Again, the whole purpose of configuring QoS on a network is to make sure streaming video and audio calls don’t lag (or even get dropped) due to a congested network. It is not a tool that can actually increase bandwidth. It can’t tunnel through a clogged network, either.

A good QoS implementation will improve the quality and speeds of mission-critical data by optimizing the allocated bandwidth and facilitating the packets’ tagging so they are identified and given their assigned priorities. It makes use of the available bandwidth; it doesn’t expand it.

What is the difference between QoS and Network Throttling?

Throttling, which is also known as policing, involves setting an overall limit for traffic throughput and dropping excess traffic. QoS is a method that prioritizes some traffic over others and uses queuing, thus maximizing bandwidth for some traffic at the expense of others.

What's the main role of DSCP in QoS?

The Differentiated Services Code Point (DSCP) appears in packet headers. It is a packet-level opportunity to request a priority from QoS management software on network devices. Network managers can choose to turn DSCP detection on or off on the device, so this value can be ignored in favor of a different QoS queuing method.

Can you explain traffic shaping in QoS?

Traffic shaping is a method used by QoS to get the best value from network capacity. All networks experience surges in demand and traditional capacity planning demands bandwidth provision at the peak level plus a margin of safety. QoS traffic shaping introduces slight delays on certain traffic to enable a network with less capacity than peak demand to cater to all traffic.