How to watch NFL Germany: Seahawks vs Buccaneers

Can’t wait to watch the NFL’s first regular-season game in Germany? Find out where to stream Seattle Seahawks vs Tampa Bay Buccaneers and how a VPN lets you watch online from any location.
Mark Gill TECH JOURNALIST, VPN AND PRIVACY SPECIALIST 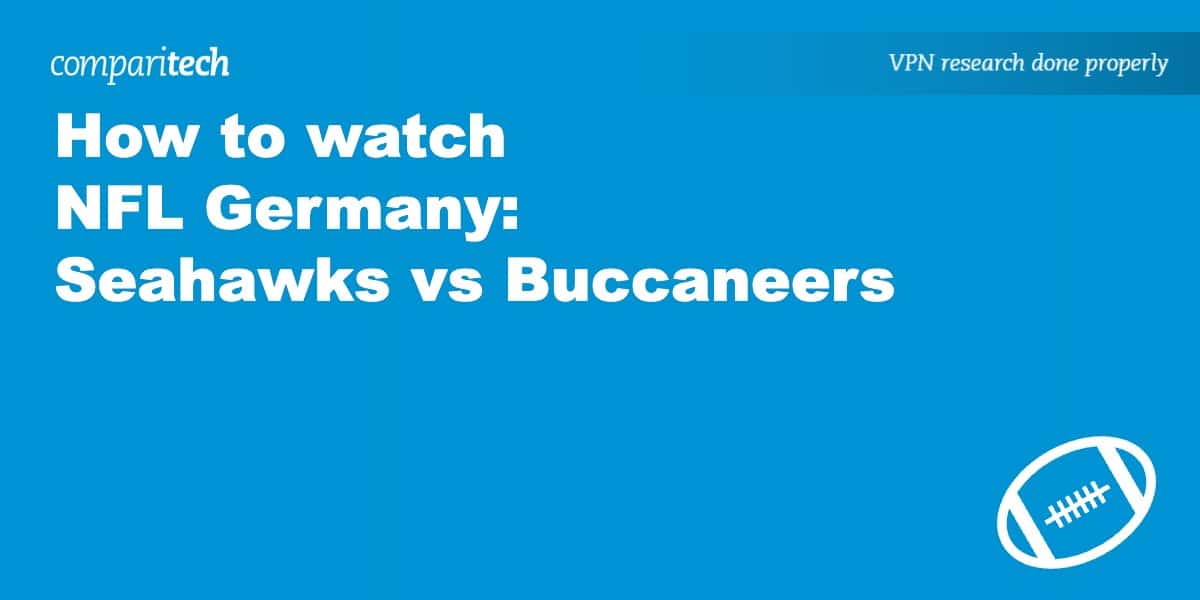 The NFL heads to Germany for its first-ever regular-season game, Seattle Seahawks vs Tampa Bay Buccaneers. The action kicks off on Sunday, November 13 at 3:30 PM CEST (2:30 PM GMT / 9:30 AM EST) at Allianz Arena, Munich. There was huge demand for tickets for this game in what may finally be Tom Brady’s final season. If you missed out, don’t worry. We’ll explain where you can watch Seahawks vs Buccaneers online and how you can watch from abroad with a Virtual Private Network (VPN).

We should point out that we’ll only be recommending official sources for streaming Seahawks vs Buccaneers. Unlicensed streams aren’t worth the trouble and may result in you missing out on the game. Indeed, many will be pulled offline for copyright violation. Unauthorized streams also tend to be lower resolution, making for an inferior streaming experience. To watch NFL Germany: Seahawks vs Buccaneers, you’re best off sticking with the official sources listed in this post.

Seattle Seahawks vs Tampa Bay Buccaneers will only be available to stream on region-locked platforms. If you want to watch via your usual streaming service from home, you’ll need a VPN.

How to watch NFL Germany: Seahawks vs Buccaneers online with a VPN

You can use a VPN to watch NFL Germany: Seattle Seahawks vs Tampa Bay Buccaneers online from abroad. A VPN lets you bypass the geographic restrictions of streaming platforms by changing your IP address and spoofing your location (making it look as if you’re still streaming the game from home).

Here’s how to live stream Seahawks vs Buccaneers using a VPN:

The NFL Germany matchup between the Seattle Seahawks and Tampa Bay Buccaneers will air live. You can reduce the risk of missing out on the action by testing your VPN with your chosen stream ahead of time. Doesn’t work? Your VPN’s customer support may be able to assist you further.

NordVPN is offering a fully featured risk-free 30-day trial if you sign up at this page. You can use the VPN rated #1 for streaming the NFL with no restrictions for a month—great if you’re away for multiple weeks and don’t want to miss a minute of football!

How to watch Seahawks vs Buccaneers live online in the US

You can stream NFL Germany: Seattle Seahawks vs Tampa Bay Buccaneers on NFL Network in the US. Remember that due to the time difference, the game kicks off in the morning (9:30 AM EST / 6:30 AM PST on Sunday, November 13). You may already have NFL Network as part of your cable TV subscription, in which case you’d simply sign in via the NFL’s website or the official app to watch at no added cost.

If you don’t have cable TV, know that there are also ways to watch NFL Network cable-free. The most affordable option is NFL+, the NFL’s new streaming service. This costs $4.99 USD a month (or $9.99/month if you want access to game replays) and includes a 7-day free trial. While blackout restrictions do apply to NFL+, a VPN can help you bypass them.

All of the above options are only available in the US. To watch them from abroad, connect to a VPN server located within the country. This ensures you get a US IP address for accessing and streaming Seahawks vs Buccaneers as normal. If you still need a VPN to do this, you can always try NordVPN which comes with a risk-free 30-day money-back guarantee.

Where else can I watch Seahawks vs Buccaneers online?

One of the best options for watching Seahawks vs Buccaneers is NFL Game Pass. This subscription streaming service is available in most countries worldwide. At the time of writing (mid way through the 2022 NFL season), a pro subscription (access to all games including playoffs and Super Bowl) costs £75.99 for the rest of the season (and offseason). However, there’s also a mobile pass which is just £23.99 for the same time period.

While you can access NFL Game Pass in most countries, it’s not available in the US, Canada, or China. If you travel abroad and encounter geographic restrictions, you’ll need a VPN to get around them. You can then change your IP address to match your home country and stream Seahawks vs Buccaneers without restriction.

What should I know about NFL Germany: Seahawks vs Buccaneers?

NFL London Games have been taking place every year since 2007 (with the only exception being 2020 due to the COVID-19 pandemic). While there have once again been three NFL games in London this year, there’s the added bonus of Germany’s very first regular season game. This takes place at Bayern Munich’s Allianz Arena, Munich and sees the 2020 Super Bowl champions, the Tampa Bay Buccaneers, face the Seattle Seahawks.

There was huge demand for this game, not only in Germany but across Europe. The main reason for this is Tom Brady, Tampa Bay’s 45-year-old quarterback, widely considered the greatest to have played the game. This may be many people’s one and only chance to see the future Hall of Famer play live. Indeed, Brady had retired following the 2021 season only to change his mind and come back in an attempt to get an eighth Super Bowl ring.

Seahawks vs Buccaneers: Who’s the favorite to win?

At the time of writing (before week 9’s NFL games have been played), the Tampa Bay Buccaneers have a record of 3-5 while the Seahawks stand at 5-3. Despite the records, the odds for this game are relatively even. While the Seahawks and quarterback Geno Smith have exceeded expectations, the Buccaneers have disappointed. However, there’s still belief that Tom Brady and the Buccaneers offense can turn things around. As such, this is expected to be a close game.