Critics of the NBA often cite the lack of parity, evidenced by merely two teams winning the last four championships, as the league’s downfall. However, viewership data proves that even if fans noticed this trend, they can’t turn away from the hardwood action: During the 2017-18 season, average NBA television viewership rose to a four-year high.

There’s much more to the story than official viewership data collected by industry giant Nielsen. Recent years have given rise to an explosion of illegal, pirated online streams, and there is no source more concentrated with this content than a specific subreddit: /r/NBAStreams. Our team does not advocate the use of /r/NBAStreams, but it is impossible to ignore its prevalence in the NBA viewership landscape. According to Reddit’s official metrics, shortly before the 2016-17 season, /r/NBAStreams sat at just over 45,000 subscribers. Before the beginning of the 2018-19 season, the same subreddit had amassed an enormous following of approximately 300,000 subscribers.

In response to the subreddit’s explosive popularity, the team at Comparitech decided to create its own analytics report to uncover the illicit viewership habits of /r/NBAStreams. We collected the text from 1,340 submissions and 25,698 comments on the subreddit from the 2017-2018 season and created a popularity score for each team. We added the total number of comments and the net score (the number of upvotes subtracted by the number of downvotes) for each game submission for the regular season and then for the playoffs. We then broke it down by team and created an average for each over the course of the season and playoffs to determine who the most pirated teams were.

Just as it seemed impossible to dethrone LeBron James’s reign over the Eastern Conference, it may be equally challenging to stop streaming a game featuring King James. The Cavaliers boasted the highest overall regular season pirate stream rating, followed by the Celtics and the Warriors.

However, the Warriors jump both the Celtics and Cavaliers if we stratify our sample by away games. This change could be explained by a couple of different factors. For one, there’s a chance that fans are more interested in tuning in when the NBA Champion Golden State Warriors are playing in their home team’s stadium. Viewers may also be taking note that the Warriors are substantially more human when they’re on the road, with an average scoring differential of +4.2 (compared to the team’s +9.3 differential in their own stadium).

On the other end of the spectrum, the Atlanta Hawks were the most poorly rated home team, while the Dallas Mavericks were bottom of the pack for away games. Atlanta and Dallas fans are likely hoping their budding young talent boost these statistics in the 2018-19 season.

Regional blackouts may be a potential explanation as to why basketball fans illegally stream these games. If you are a cable-cutter in Miami, but you have NBA League Pass, you can’t legally stream Miami Heat games because you are in Miami’s broadcast market. To get around a regional blackout like in this scenario, you could use a VPN to change your IP address so that you can get around geo-restrictions. 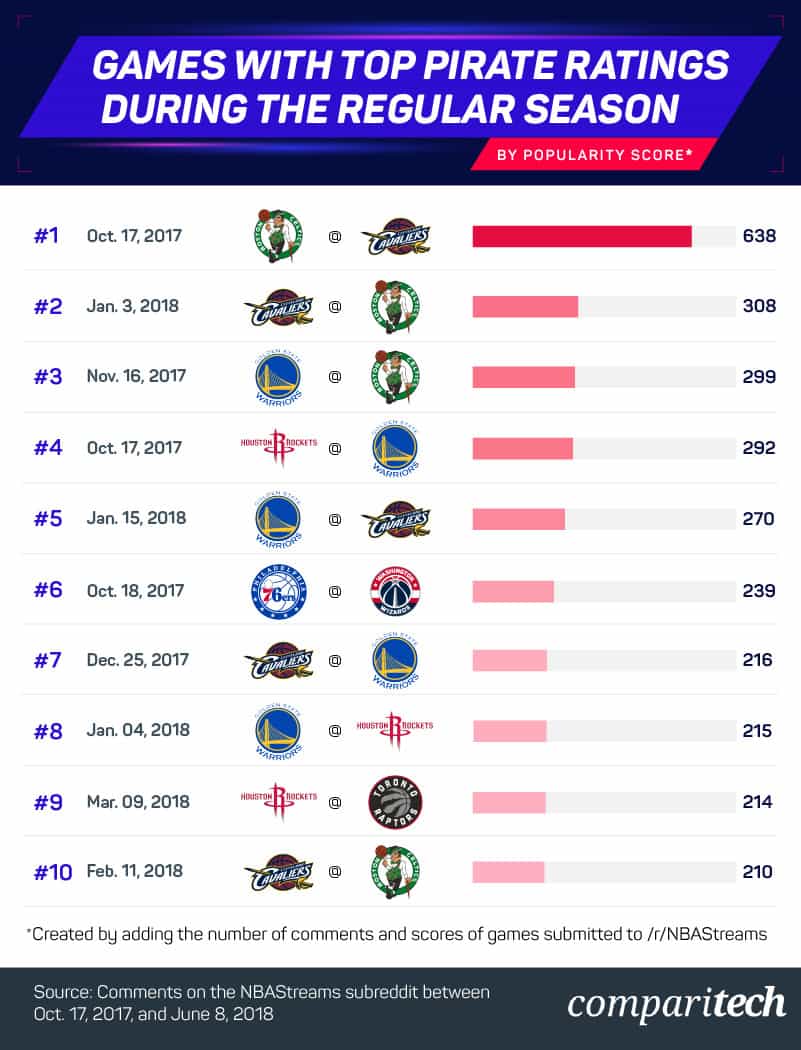 As for individual games, the Cavaliers vs Celtics season opener blew away the competition when it came to the most pirated game. Even more impressive is that the game’s rating may be justified by the number of storylines from the matchup. First, it was the season opener, which always will reel in more viewers. Additionally, LeBron James and the Cavaliers were slated to face off against their former teammate, Kyrie Irving, and the separation over the offseason brought plenty of drama. Lastly, Gordon Hayward suffered a gruesome, season-ending ankle injury just a few minutes into the matchup. 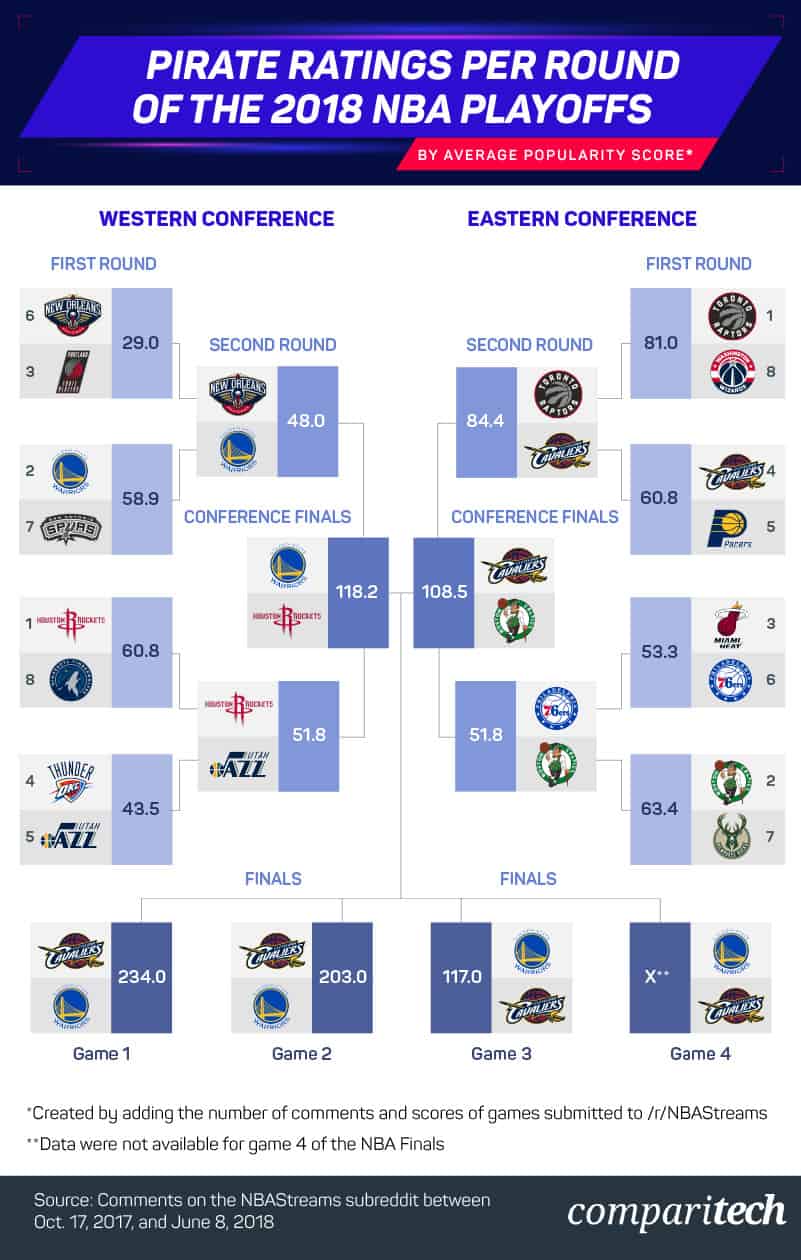 The highest-rated matchup during the first round was between the Toronto Raptors and the Washington Wizards. It took six games for the Raptors to close out the series, despite the Wizards’ John Wall averaging 26 points and 11 assists in the series. There was notably less interest in the New Orleans Pelicans and the Portland Trail Blazers compared to all the other teams, which may tie back to fans’ general skepticism regarding the Warriors’ dominance of the West.

In the third round, Houston challenged Golden State throughout an admirable, seven-game battle. Although the Western Conference favorite and reigning champion Warriors prevailed, the Rockets can at least take solace in being the highest-rated Conference Finals pirate stream by a wide margin.

As for the final round of the playoffs, it is quite evident that interest waned as the Warriors showcased their dominance against the Cavaliers. The Warriors convincingly swept the Cavaliers in four games, winning three of the matchups by double-digit margins. Shifting away from engagement performance on a game-by-game or season-long basis, we analyzed the average number of different streams available for each team. Clipper fans had the slimmest pickings for away games over the course of the season, with a league-worst average of only 10.6 different pirate streaming links per game. On the other hand, Cavaliers fans more luck finding their team, with an average of 13.1 pirate streaming links per game.

While the Cavaliers reigned supreme, the Jazz and Nets landed at the bottom of the league for pirate streaming options. The lack of streaming choices for Nets matchups is understandable given the team’s lackluster finish, but the Jazz present a more puzzling case, seeing as the team finished as the fifth seed in the Western Conference. 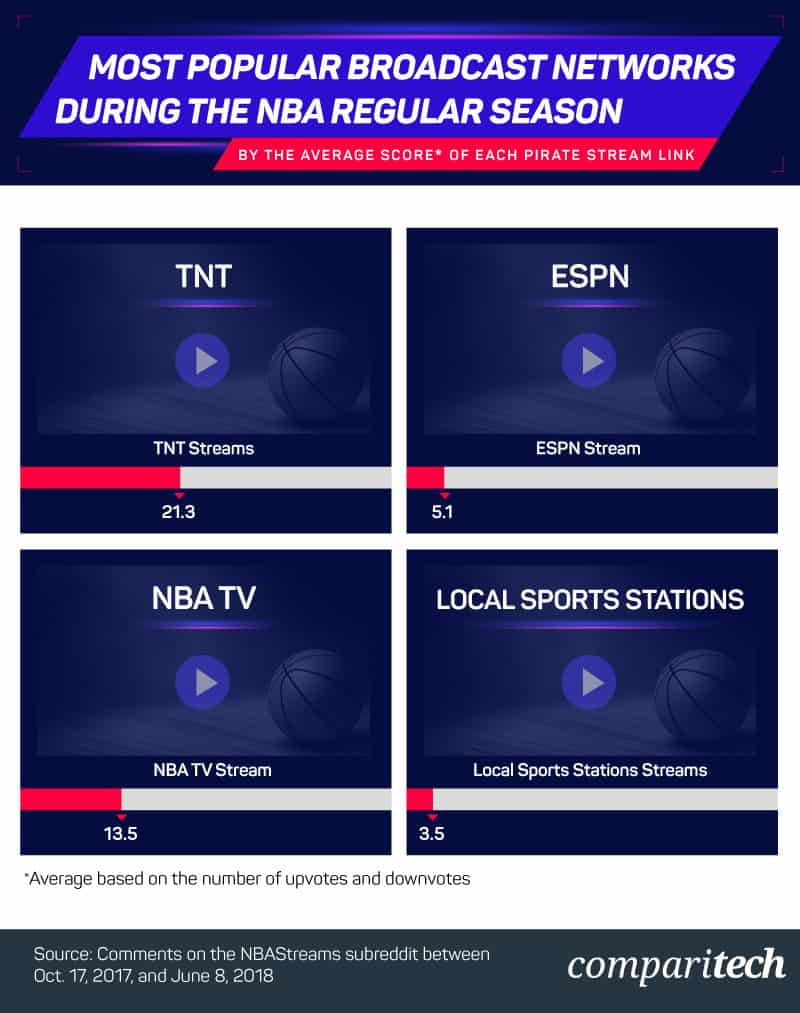 Whether it’s due to Ernie and Kenny’s slightly more level-headed approach or the never-ending entertainment from Shaq and Chuck, TNT appears to be /r/NBAStream’s network of choice with an average score of 21.3. On the other side of the spectrum, it doesn’t seem that the subreddit enjoys local broadcasts nearly as much, with an average score of only 3.5 according to our metric.

Streaming is Far From a Slam Dunk

Although this data provides valuable insights into the mind of NBA viewers, it’s important to remember the illegal nature of these streams. At the same time, we want to remind readers that not all torrents and torrent streams are inherently illegal. Performing maintenance on your computer’s security is recommended as well to ensure that you stay safe while consuming content.

We encourage all of our readers to consume as much hardwood action as possible, but to do so via the proper channels.

The popularity score for game 4 of the NBA Finals was not available.

If you want to pass this story to your readers for noncommercial use, go ahead. Our only ask is that you don’t turn the ball over, and instead include a link back to this page so that everyone can see our full analysis.