How to watch March Madness 2022 live online (outside the US)

Want to live stream NCAA March Madness online from outside the US? We explain how to watch March Madness 2022 online from any country in the world using a Virtual Private Network (VPN).
Ian Garland Streaming, Kodi and VPN Expert 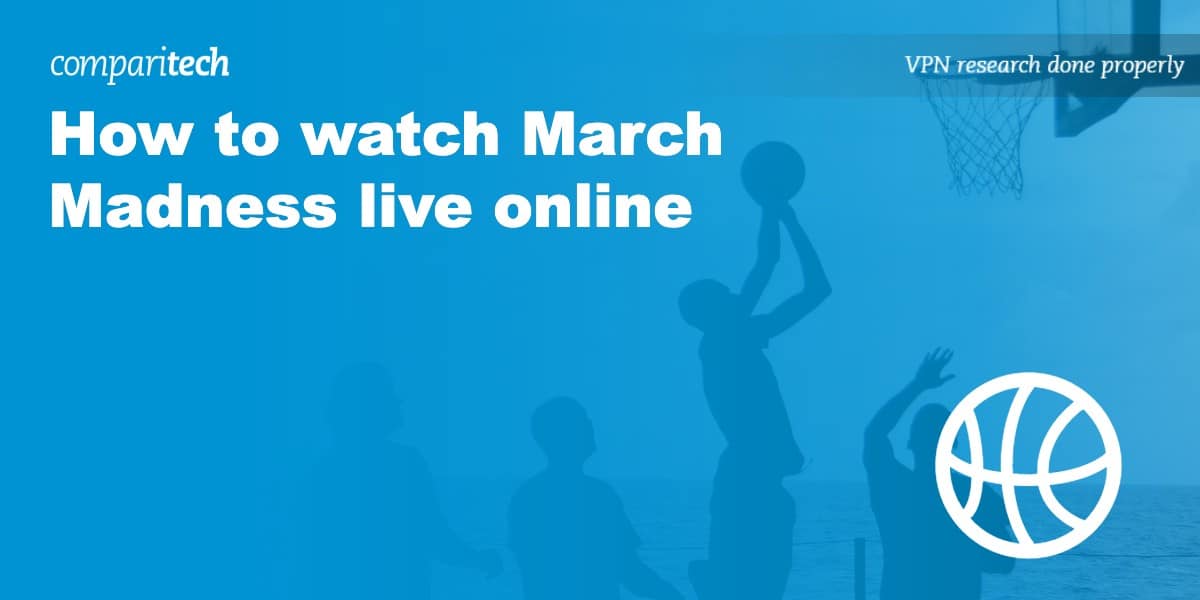 This year’s NCAA March Madness tournament begins on Sunday, 13 Mar 2022, and will run until Monday, 4 Apr 2022. Below, we’ll explain how to watch every 2022 March Madness game live online, whether you’re at home or abroad (outside the US). We will explain where to watch the games with a VPN– so that you can enjoy watching all 68 teams battle it out in this important elimination tournament.

We’ll only be recommending official March Madness broadcasters. While there are almost always unauthorized streams for events like this one, we strongly advise against using them. To begin with, the video is often low-resolution and on a delay. Additionally, unlicensed streams are prone to be taken offline for copyright violation. As such, there’s no guarantee you’ll even see the end of a given game. With so many legitimate ways to watch, there’s no reason to use unauthorized streams.

March Madness will only be available on geo-restricted. If you’d like to use your usual streaming service from back home while traveling abroad, you’ll need a VPN.

How to watch March Madness abroad with a VPN

VPNs work by routing your internet traffic through an encrypted tunnel and allowing you to appear as if you are browsing the internet from a different location. VPNs might seem confusing at first, but it’s actually very easy to access geo-restricted platforms from abroad. Just follow the steps below.

Here’s how to live stream March Madness 2022 online from anywhere:

We recommend testing your VPN with the steps above before the game you’d like to watch actually begins. This way, if anything doesn’t work as expected, there should still be time to get help from your VPN’s customer support team and you might not have to miss the beginning.

The NCAA March Madness tournament will be shown in several regions around the world. Take a look below to find out how to watch March Madness 2022 in your country:

Every game of this year’s event will be available on March Madness Live. There’s a catch, though: you’ll have to sign in with your cable TV provider details.

There are four networks showing March Madness live: CBS, TruTV, TNT, and TBS. CBS and TruTV have free live streams, however, you need cable TV in order to access them. Luckily, there are other ways to watch, even if you don’t have cable.

You can watch all of these channels on YouTube TV, AT&T TV Now, or Hulu with Live TV, but these services are relatively expensive, generally costing around $50 USD per month. They do all include a free trial, however, so it’s technically possible to watch the whole tournament for free, albeit in a fairly roundabout way.

There is a far easier, far less expensive way to watch March Madness without cable. You can stream every game live using a combination of Paramount+ ($5.99 per month) and Sling TV’s Blue package ($35 per month).

It’s worth noting that all of the above services are geo-blocked. As such, you’ll only be able to use them if you’re in the US or connected to one of your VPN’s American servers. NordVPN comes with a 30-day money-back guarantee, so you can try it risk-free.

TSN is the exclusive NCAA March Madness broadcaster in Canada. If your cable package already includes TSN, you can sign in and watch all of the games at no additional cost. Don’t have cable TV? No problem — you can just sign up for an online pass; these cost $7.99 CAD per day or $19.99 per month.

You should note that TSN is geo-restricted, and to purchase an online pass, you’ll need a credit card linked to a Canadian address. If you usually live in Canada, you should still be able to register and watch from abroad with a VPN but otherwise, it’ll be very difficult to use this service.

In the UK, March Madness 2022 will air on BT Sport and ESPN Player. If you’re already a BT Sport subscriber, you can log in and stream every game for free. Don’t have cable? No problem; BT Sport recently introduced an online-only plan that costs £25 per month. Unfortunately, there’s no free trial, though. ESPN Player, on the other hand, offers a seven-day free trial, after which its costs £9.99 per month.

These services are geo-restricted, which means you’ll have to use a VPN to access them from abroad.

Australian basketball fans can follow all of the action live on ESPN or Kayo. If you’re a Foxtel or Fetch customer, you should be able to stream this year’s March Madness tournament for free on ESPN using the Foxtel Go or WatchESPN apps. You can also sign up for Foxtel Now if you don’t have cable, but the required packages will cost you $54 AUD per month.

Instead, if you don’t have cable, you’d be better off watching on Kayo. This service costs $25 AUD per month and will show every 2022 NCAA March Madness fixture live. There’s also a two-week free trial, so if you’re only interested in the latter stages of the competition, you’ll be able to watch the second half of the tournament for free.

Foxtel, Fetch, and Kayo are only available in Australia. To access them from abroad, you’ll have to connect to an Australian VPN server.

ESPN owns the international broadcasting rights for March Madness. With over a dozen regional channels, it’s highly likely you’ll still be able to watch even if we haven’t mentioned your country specifically above. Remember, ESPN is sometimes only available via other services (Foxtel in Australia, for instance), and not every broadcaster will allow you to watch their content online.

Take a look below for a complete guide to March Madness 2022: