How to watch Black Mirror season 5 online from anywhere

Want to watch Black Mirror season 5 for free online? In this post, we’ll let you know what to expect from season 5 and explain how to stream Black Mirror from anywhere using a Virtual Private Network (VPN).
Ian Garland Streaming, Kodi and VPN Expert 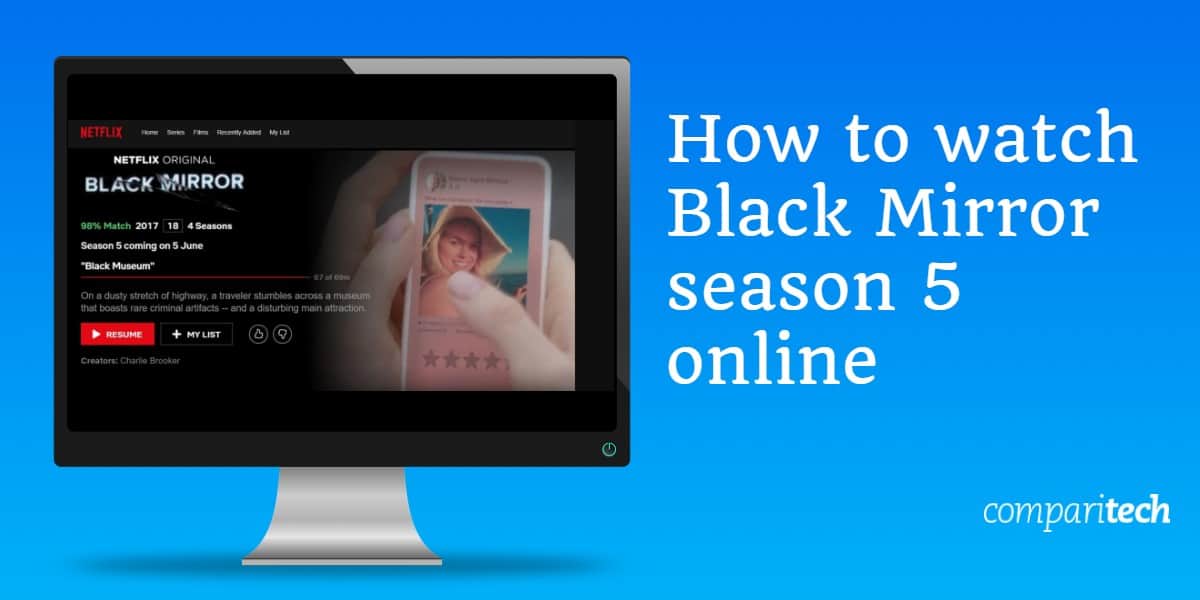 The entire fifth season of Black Mirror will be released on June 5. Previous seasons have been added to Netflix at 12 AM PST (3 AM EST / 8 AM BST), and there’s no reason to suspect anything will be different this time around. Not quite caught up? There’s still plenty of time to watch seasons 1–4 (and of course, the first “choose your own adventure” episode, Bandersnatch), and below, we’ll let you know how to stream every episode of Black Mirror online for free.

We’ll only be recommending official sources. While shady streaming sites thrive on unofficial uploads of popular shows, we strongly advise against using them. To begin with, they often offer low-resolution video, and to make matters worse, their content can be taken down at any time for copyright violation. You can watch Black Mirror for free anyway, so there’s no reason to use unauthorized sources.

Black Mirror will primarily be shown on Netflix, a region-locked streaming service. If this show isn’t available on your country’s version of Netflix, you’ll need a VPN to watch it.

For most people, it’ll be easy to stream Black Mirror season 5 online. As far as we know, Netflix will be releasing this show globally, so you should always be able to watch, even if you’re travelling between countries.

Don’t panic if you don’t already have a Netflix account: this service comes with a one-month free trial. With just 23 episodes in total, you should have enough time to watch the entire show. Not entitled to a free trial or need a little more time? Netflix’s prices vary based on your location, but generally, you can expect to pay around $8.35 USD per month for a standard subscription.

Why can’t I watch Black Mirror on Netflix?

Netflix has occasionally allowed international networks to air its shows in specific countries in the past (House of Cards was shown by Sky in Germany, for instance). Additionally, there are a few countries where Netflix isn’t available (China, North Korea, Crimea, and Syria). This means that not everyone will be able to watch Black Mirror on Netflix. Currently, there are no confirmed international broadcasters other than Netflix, but it doesn’t hurt to be prepared just in case.

You can use a VPN to spoof your location and access another country’s version of Netflix abroad. This method will even allow you to sign up for Netflix in countries where it usually isn’t available (although you’ll have to purchase a gift card with the currency of the country your VPN server is in).

Don’t have a VPN yet? We recommend ExpressVPN. This high-speed VPN offers over 3,000 servers in 94 countries and can unblock numerous popular platforms including Netflix US, Amazon Prime Video, and Hulu abroad. Best of all, as ExpressVPN has a 30-day money-back guarantee, you can try it risk-free. If you’re unsatisfied or only need a VPN to watch Black Mirror, you can just cancel to receive a full refund.

How to unblock Netflix abroad with a VPN

If Netflix is blocked in your country or Black Mirror isn’t available in your regional library, you can simply bypass these restrictions using a VPN. Follow the steps below to stream Black Mirror season 5 from anywhere:

It should begin immediately but you may see an error saying “You seem to be using an unblocker or proxy. Please turn off any of these services and try again.” Clear your cookies and cache, then refresh the page. If it still doesn’t work, try a different server or contact your VPN provider for further support.

Unfortunately, no. Currently, Netflix is the only streaming service offering Black Mirror, and given the success of the show, it’s unlikely that this will change any time soon. On the plus side, Netflix is available in more countries than Amazon Prime Video, so it’s easier to watch Black Mirror when travelling.

What do we know about season 5 of Black Mirror?

Netflix recently released a trailer for the fifth season of Black Mirror and it seems that this series could be the most difficult to watch yet. The new season, like those before it, will put our relationships with technology under a microscope and pose questions about the morality and ethics of future tech. Below, we’ve provided a brief overview of all three upcoming episodes:

Black Mirror has always had a cast of recognizable faces and season five will be no different. Below, you’ll find some of the celebrities who made appearances in the announcement trailers, but there are sure to be additional cameos we won’t know about until the episodes are released.