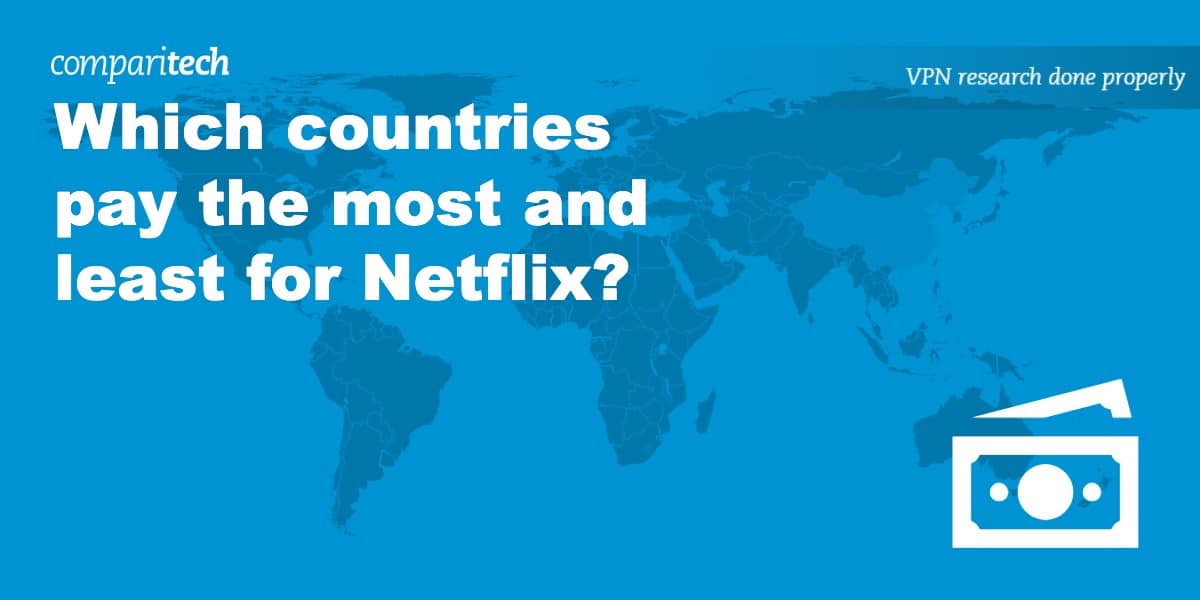 Over the last few years, we’ve regularly analyzed the differences in library sizes and monthly costs of Netflix subscriptions around the world, often finding a huge disparity. And this is no more so than in recent months.

In recent months, Netflix has hit various countries with price hikes, including the US, Canada, the UK, Ireland, Argentina, Turkey, and Denmark (most of which saw similar price increases in 2021, too). In sharp contrast, however, Netflix recently announced it was slashing its prices in India to compete with Disney+ and Prime. And from November 1, 12 countries can now opt for a cheaper subscription with adverts.

Are these cheaper subscription options the most cost-effective way to watch Netflix? Or are countries like India still the best places to get the most bang for your buck? And where are Netflix prices the least cost-effective?

Please note: the prices included in our study are the base price as advertised by Netflix. They do not include the various taxes and other charges users may face. We are aware that several countries, including Argentina, have these charges but our study focuses on the price charged by Netflix.

To gather this data, we’ve looked at several factors.

Second, we evaluated the cost per month in each country and how these shape up against others (based on current exchange rates at the time of writing). We have also analyzed the 12 countries with ad-based subscriptions (Australia, Brazil, Canada, France, Germany, Italy, Japan, Mexico, Spain, South Korea, UK, and US) separately to see how these plans compare.

Our study shows a massive disparity when cost per title is analyzed between different countries–regardless of the plan you choose.

Are Netflix basic plans with ads worth it?

One of the biggest advantages of streaming platforms over standard TV channels is their lack of adverts. So are the cheaper basic plans with ads on Netflix worth it? And do they offer the best value for money when we compare them to basic plans without ads from around the world?

It probably goes without saying that all 12 countries save a reasonable amount of money per title when opting for the basic plan with ads. But as the above table demonstrates, some get a better deal than others. The US and South Korea save the most per title when choosing the basic with ads plan (saving $0.0005 and $0.00051 per title respectively), while Brazil (which boasts the most cost-effective basic with ads plan) saves less than half this per title ($0.00022).

But none of these countries get a better deal per title than the most cost-effective country for basic plans without ads–Pakistan. Pakistanis pay $0.00032 per title for a subscription that doesn’t include ads. And they enjoy an almost-average library size of just less than 6,000 titles.

Due to their incredibly cheap prices across all three plans (without ads), Pakistan, India, and Turkey are the most cost-effective countries to watch Netflix in. But with their near-average library sizes, Pakistan and India offer the best value for money. With library sizes of 5,974 and 6,086 titles respectively (compared to the average of 6,029 and Turkey’s 5,512) these two countries seem to get more while paying less.

We should also point out that Indians have the option of a mobile-only plan, too (many of the countries covered in this study do not have this option–hence why we haven’t included it as its own section). At a price of 149 INR per month (around $1.80), Indians can access Netflix on their mobile phones. This creates a cost per title of $0.00030 which would make it the most cost-effective basic plan option–but it is only available on mobiles and therefore, like the ad-based plans, comes with its limitations.

Argentina also overtakes India when it comes to cost-effectiveness for standard plans. Despite having a below-average library size of 5,535 titles, Argentinians pay just 0.00049 per title for a standard plan, making it the third most cost-effective country.

This idea that you get more while paying less continues when we look at the countries with the biggest library sizes and their cost per month. The central, eastern, and northern European countries of Slovakia, Bulgaria, Lithuania, Estonia, and Latvia have access to the most titles (over 7,500 titles each) at a cost per month of €7.99, €9.99, and €11.99 for basic, standard, and premium plans. This sees them featuring within the top 20 countries for cost-effectiveness across all three plans.

While the UK also has a reasonably large library (7,193 titles in total), its recent price hikes have seen it plummeting through the rankings, especially for standard and premium plans.

As we have seen, when it comes to value for money, Pakistan, India, and Turkey win hands down on cost-per-title value across all three plans.

At the other end of the scale are Liechtenstein, Israel, and Switzerland where none of their plans are cost-effective.

With its library size being just below average (5,982) and its cost per month being well above average, Liechtenstein is the least cost-effective for basic, standard, and premium plans. Its cost per title is $0.00203, $0.00162, and $0.00106, making it around double the average cost. Switzerland shares the same price as Liechtenstein, but its above-average library size of 6,759 titles makes it slightly better on a cost-per-title basis.

Israel, meanwhile, has one of the worst library sizes with just over 5,000 titles. This, along with its above-average monthly costs, make it the second least cost-effective country for Netflix subscriptions.

When compared to the cheapest plans, Lichtenstein’s cost per title at least five times more expensive.

The cheapest places to get Netflix

Turkey’s, Pakistan’s, Argentina’s, and India’s unbeatable cost-per-title prices are, undoubtedly, due to their incredibly cheap costs per month–and that’s even after Turkey’s and Argentina’s recent price increases.

For example, despite increases of 50 cents to $1 across its plans, Turkey’s plans are up to four times cheaper than average. Turkey’s premium subscription of $5.07 per month is also over a whopping $20 cheaper than Switzerland’s and Liechtenstein’s huge cost of $25.47.

On a cost-per-month basis, the US doesn’t fare well as it features as the fourth most-expensive country for a Netflix subscription across all plans.

We’ve analyzed the monthly cost of Netflix relative to the average monthly income in a country to determine where Netflix may “feel” more expensive.

The most expensive places to get Netflix

What’s clear from the above is that the most expensive monthly subscriptions for Netflix tend to be in European countries and the US.

If you are looking to securely access your Netflix library from abroad, here are the best VPNs for Netflix currently available on the market.

For the full datasheet for all countries and plans, click here.

No, Netflix doesn't offer an annual subscription plan. However, it offers monthly plans with different access levels depending on how much content you want to watch. The basic plan allows for standard-definition streaming on one device at a time. In contrast, the premium plan offers 4K Ultra HD resolution and simultaneous streaming on up to four devices.

How many subscribers did Netflix lose in 2022?