The most popular Netflix Original series by country 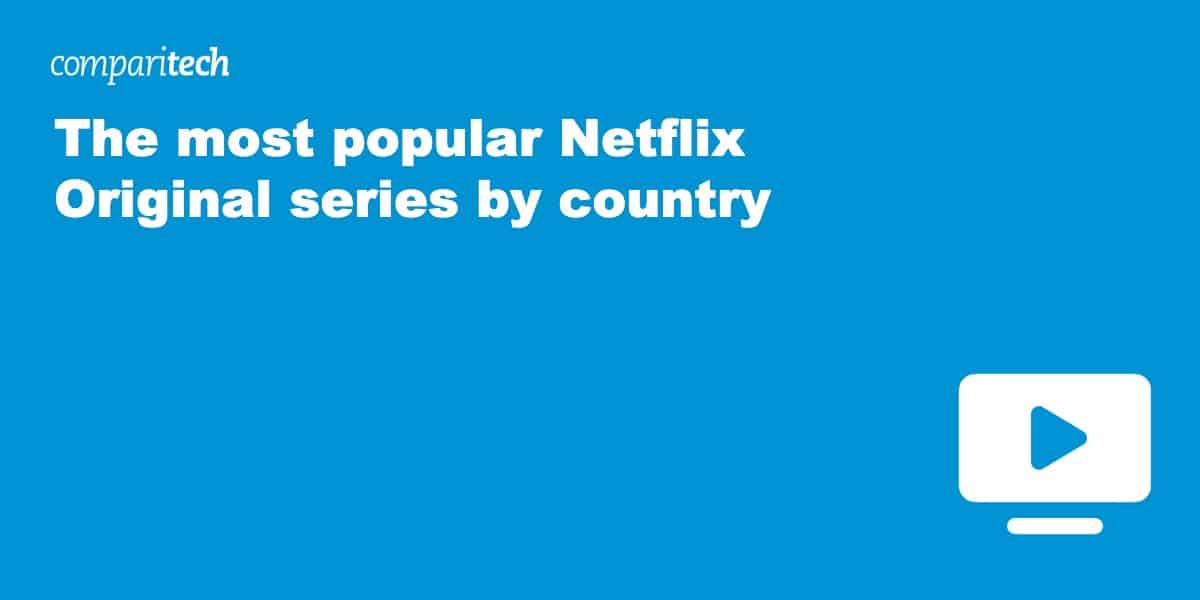 If there’s one thing Netflix is renowned for, it’s its original content. From Bridgerton, which has been watched by over 80 million people, to the critically-acclaimed House of Cards, which was one of the first originals Netflix produced (and remains one of the highest-rated titles with an IMDb score of 8.7), Netflix boasts some of the best series of all time.

But which comes out on top in your country?

We explored the data from the 27,238 Netflix viewing histories uploaded through our Time Spent Streaming tool to find out. 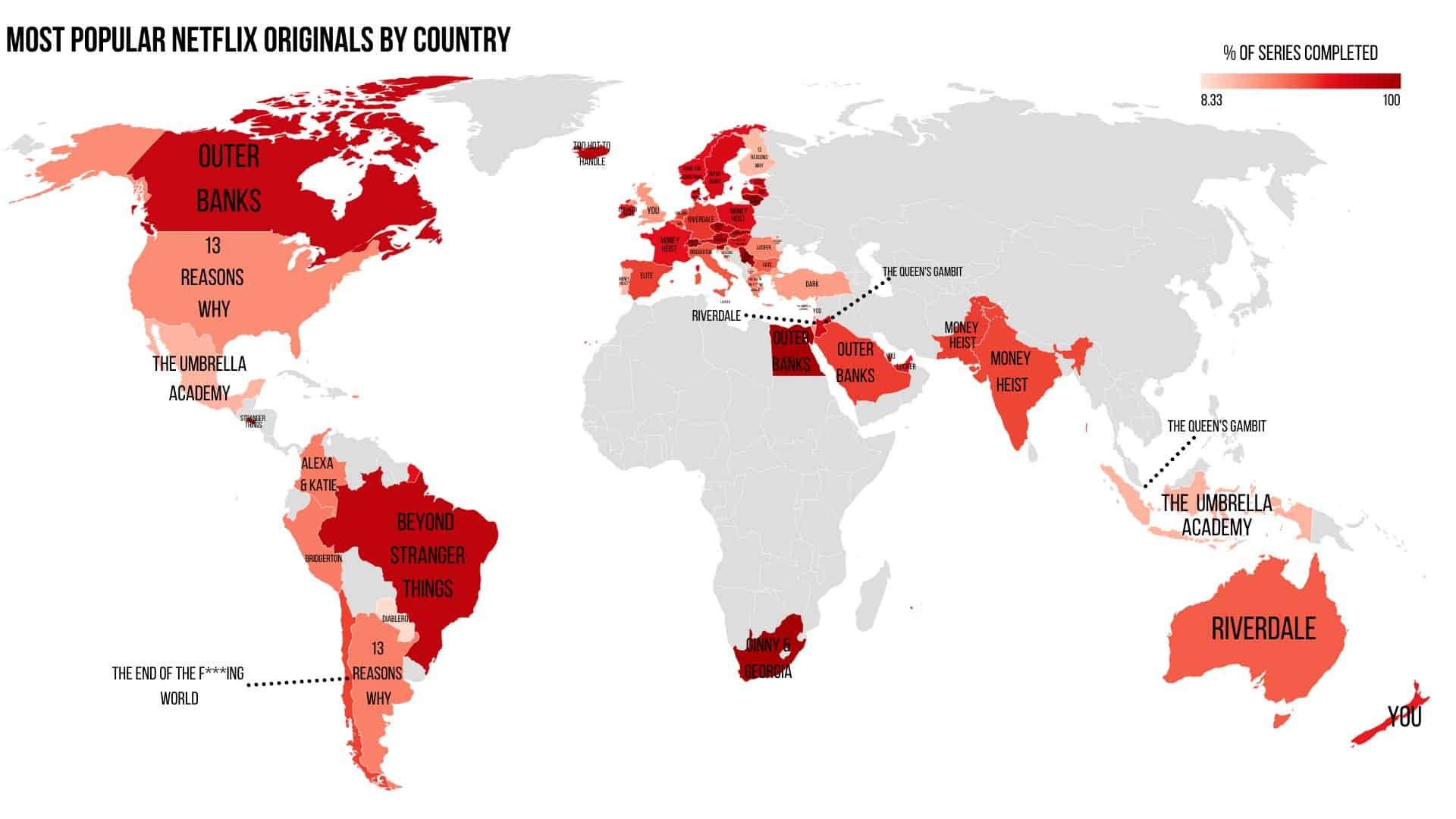 Money Heist was the top pick in the most countries

According to user figures by country, Money Heist (or, to give it its original title, La Casa de Papel) is the most popular Netflix Original series in the most countries, coming out on top in seven in total. This includes Czechia, France, India, Pakistan, Poland, Portugal, and Slovakia.

Based on a unique group of eight misfits who try to carry out a €2.4 billion robbery on the Royal Mint of Spain, Money Heist is set to enter its fifth series later this year.

Two other series–13 Reasons Why and You–also ranked at the top for six countries each.

What were the top 5 most popular Netflix Originals overall?

While Money Heist was the top pick in most countries, it wasn’t one of the top five titles for overall viewer counts worldwide. The top five titles overall (according to total user counts) were 13 Reasons Why, Riverdale, You, Stranger Things, and Bridgerton.

Based on the number of users who submitted their Netflix files to our tool, more than 50 percent of Netflix users have watched 13 Reasons Why and Riverdale (just over 52 and 51 percent were noted as having watched the titles respectively). These were closely followed by You (48 percent), Stranger Things (47.5 percent), and Bridgerton (44 percent).

Other top titles with over 40 percent of users tuning in to watch were Sex Education (43 percent), Outer Banks (43 percent), and The Umbrella Academy (41 percent).

How do these viewer counts compare to other non-Netflix titles?

None reach the same levels as the top four mentioned above. But Friends (46 percent of users watching) and Brooklyn Nine-Nine (45 percent) do slightly outdo fifth-place Bridgerton. The Vampire Diaries has also been watched by over 40 percent of viewers.

You can read more about users’ overall viewing habits in our recent article, “What’s the world watching on Netflix?”

Which country has the best taste in Netflix Originals?

Based on IMDb ratings, the Turkish have the best taste in Netflix Originals thanks to their choice of Dark which is rated 8.8. Dark was Netflix’s first original series in German and follows the disappearance of two young children in a German town.

The Turkish were closely followed by El Salvadorans with Stranger Things (rated 8.7) and Serbia, Singapore, and Jordan with The Queen’s Gambit (rated 8.6).

At the other end of the scale, however, is the Cayman Islands where the top choice was Million Dollar Beach House which is rated a mere 4.1 on IMDb. Iceland’s choice of Too Hot to Handle isn’t rated much higher, either, with a 4.5 rating. While lacking in esteemed IMDb ratings, both reality TV shows have drawn in millions of viewers. Netflix estimated that Too Hot to Handle would reach 51 million households within the first four weeks of its release. 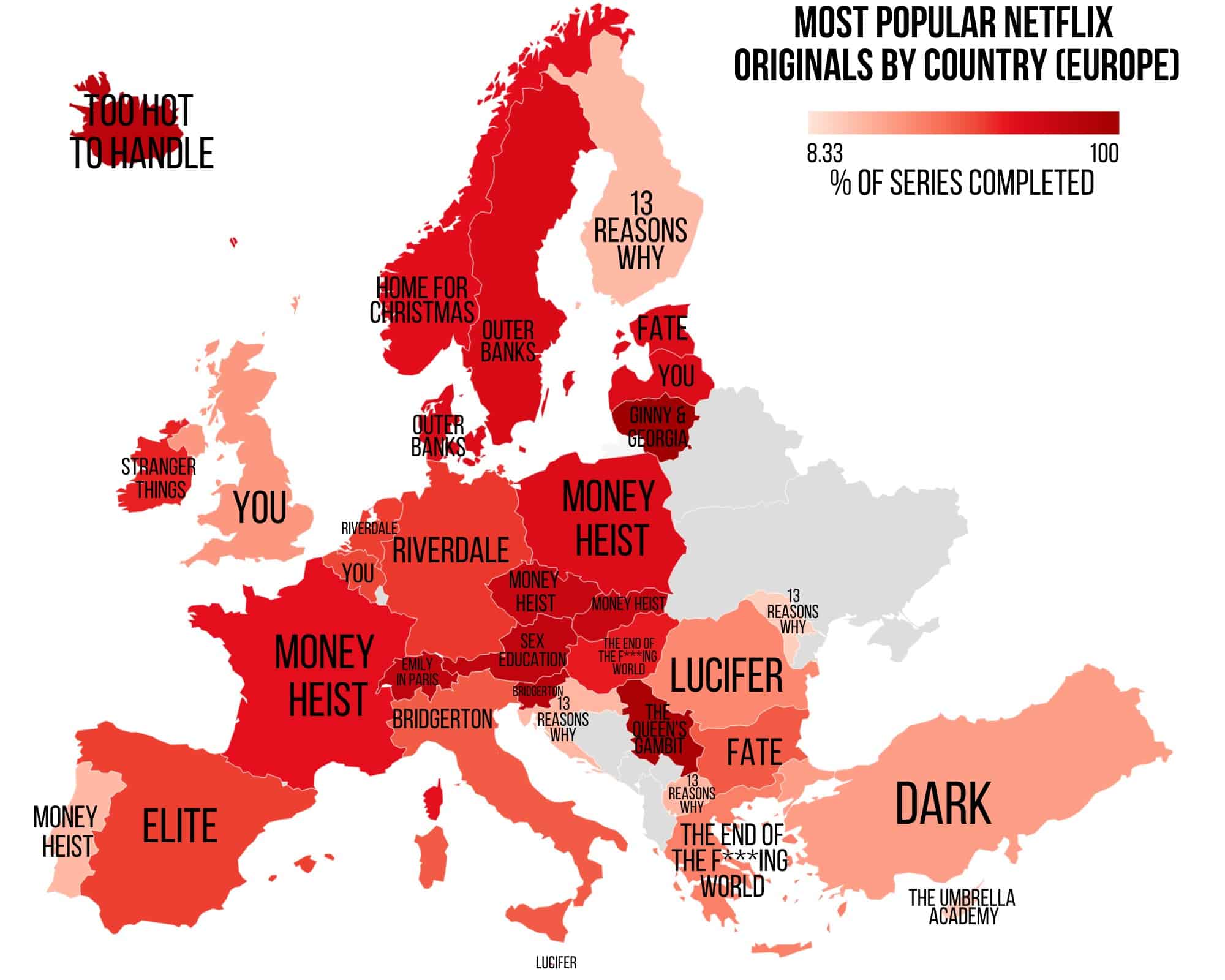 The Spanish and Norwegians both favor Netflix Originals that have been set in their own backyards. Our stats reveal that the Spanish have been tuning into Elite, a crime drama that’s set in a fictional private school in Spain.

But in Norway, festivities are the order of the day where Home for Christmas (Hjem til jul) was the most popular Netflix Original. The Norweigan series follows Johanne, a singleton who is fed up with the constant questions about her love life so sets out on a 24-day search for a boyfriend she can take home for Christmas.

Who’s the most committed to completing their favorite Netflix series?

With our data, we can see how much time the average user in each country has spent watching each series.

So, who’s binged their way through their favorite Netflix Original series, and who’s lagging behind?

According to our results, Lithuanians, El Salvadorans, Egyptians, South Africans, and Serbians have been the most dedicated Netflix Original viewers. Lithuanians and South Africans completed the entire series of Ginny & Georgia, Egyptians devoured all of Outer Banks, and Serbians couldn’t get enough of the Queen’s Gambit. But it’s perhaps the El Salvadorans that should get the full crown for being the most dedicated Original series viewers. They completed all of Stranger Things which is 25 episodes and around 21.5 hours long.

Meanwhile, Paraguians and the Lebonese may have favored Diablero and You (respectively) but the average viewer has only watched one or two episodes–at best.

Results are based on the 27,238 Netflix viewing histories uploaded through our Time Spent Streaming tool since March 2021. Viewing histories for each user cover all of the titles watched since their Netflix subscription began.

The total running time for each series is taken from IMDb’s indicated episode length which is multiplied by the number of episodes. Countries that had completed over 95 percent of the series were classed as having completed them to allow for introductions/recaps.